Chief Policeman of the Third Reich

November 11 2017
13
The abbreviation RSHA (General Directorate of Imperial Security) thanks to the television series "17 Moments of Spring" is known to everyone. Section IV - the Gestapo, (Muller), VI - SD-abroad (Schellenberg). These two terrible divisions were shared by a less well-known, but no less terrible division V - the criminal police of the Reich (Kripo), headed by the division Arthur Nebe. 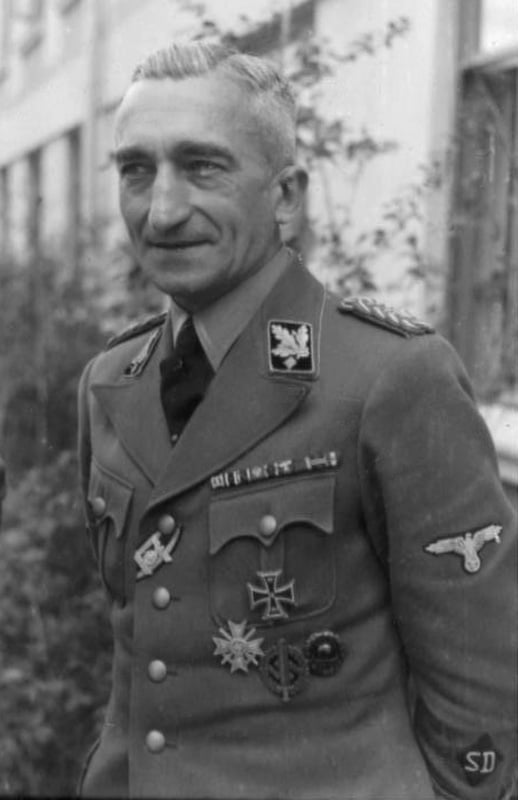 From pastors to police

Arthur Nebe was born in Berlin in 1894 year in a poor teacher's family. During the lessons in the school, there were not enough stars from the sky, but he studied theology with great interest, for which he mastered Hebrew on his own. Parents encouraged the passion of his son - they had nothing against it if Arthur became a Lutheran pastor. World War I adjusted the life plans of many young people.

Arthur volunteered for the front, fought bravely - he deserved two wounds, two Iron Cross and lieutenant shoulder straps. Now the young man saw himself only as a military man. But Germany lost the war. Under the terms of the Versailles Agreement, the army was reduced and a huge number of wartime officers were on the street.

It was very difficult to find a job in a war-ravaged country, so when the vacancy of an employee of the Berlin criminal police with a guaranteed salary loomed on the horizon, the young man did not hesitate. Well, the pastor did not leave him, but there will be a criminologist. Arthur began to study law and forensic medicine.

Career Nebe developed successfully: starting with an ordinary employee of the department for combating drugs, he soon became his boss. In 1931, Heaven led the anti-looting department. The bosses could not get enough of an intelligent employee, in their opinion, Heaven had only one drawback: he was too keen on politics.

In the 1931 year, Nebe joined the NSDAP, became an active member of it and made a party cell from the Berlin criminal police officers. In 1933, the Nazis came to power and began a total purge of personnel. The first to lose their seats in state institutions were the Jews, then the Communists, then the Social Democrats.

On the vacant places the Nazis placed their people, who had already proved their loyalty to Hitler. And then Nebie’s career abruptly went uphill: in 1934, he was appointed a criminal adviser to the newly formed secret police (Gestapo), and in July, 1936 Nebie took off to the very top - took the post of chief of the Reich criminal police. At the same time, Heaven perfectly understood that he would have to deal not only with criminals.

Sample pen: "playground for the halt"

1 August 1936, the XI Summer Olympics opened in Berlin. The Nazis attached great importance to the Games as an opportunity to demonstrate to the whole world the beautiful form of the “new order”. And they succeeded. The guests who came to Berlin were delighted, but very few people knew what was on the other side of the showcase.

Only after accepting his post, Nebe immediately received an assignment to clear Berlin of the Gypsies. Uncle Arthur (as his subordinates called him for the eyes) gave the operation the name “Playground” and set about implementing the plan with his characteristic energy.

Knowing Berlin like the back of his hand, Heaven chose a place on the eastern outskirts of the city between the garbage dump and the cemetery. Territory enclosed with barbed wire. Within a few days, more than 800 people were brought here. In fact, one of the first concentration camps appeared on the outskirts of Berlin.

After the end of the Olympiad, the camp was not disbanded, but began to accept new batches of prisoners. In March 1943, the overwhelming majority of the prisoners were taken to Auschwitz.
Hitler considered that he was not mistaken with the new chief of the criminal police and that he passed the “test of suitability” with honor.

In November, 1937, Hitler held a secret meeting with the leadership of the Wehrmacht, at which he explicitly stated that he intended to start a war in Europe very soon. The generals were horrified. This is the year 1941 after crushing victories, they will believe in the invincible genius of the Fuhrer, and yet he is for them an upstart corporal. And they are not yet afraid to object to it.

The War Minister, Field Marshal Blomberg, and the Commander-in-Chief of the Land Forces, Colonel General von Fritsch, were categorically opposed and predicted a defeat to Germany, even more terrible than in World War I. Hitler swallowed demarche (the time when he will remove the recalcitrant generals from his posts is still ahead), but Blomberg and Fritsch put an end to their careers with their objections.

In January, 1938, 59-year-old Blomberg combined marriage with a 25-year stenographer from supply management Eva Grün. The witnesses at the ceremony were Hitler and Goering. And the next day, they put a police card from the archive of the department of Uncle Arthur in front of Hitler: it turns out that the young wife of the field marshal posed for pornographic cards and was registered with the morality police as a prostitute.
"A shame! Shame! ”Hitler shouted, rubbing his palms joyfully.

26 on January 1938 of the year was removed from all the posts of Blomberg, and on February 4 of the year 1938 was dismissed Fritsch, who was accused of homosexuality. And although von Fritsche Court of Officer Honor justified him, his reputation was stained, he lost his post.

But besides collecting dirt, Nebe also dealt with more important “deeds”. It was he who proposed gas as the most effective method of killing. It was the kripo who caught saboteurs, deserters, workers who quit their jobs, and when Germany started the war, fled foreign workers and prisoners of war. On the territory of Germany, the creepists were afraid no less than the Gestapo men.
However, everything seemed to Heaven a little, he wanted to be in the thick of things.

Commander of an Einsat Group B

In May 1941, on the eve of the war with the USSR, four Einsatzgroups were created: A, B, C, and D. Their task was to follow the Wehrmacht units to sweep the occupied territories: from party and Komsomol activists, Soviet party workers, NKVD employees, fighting with manifestations of anti-German activity, etc. But the first point was the extermination of the Jews.

Group B commander Himmler appointed Arthur Nebe. The assignment was made with a long-range view: it was the Einsat Group B that was to clean up Moscow. In June, Heaven arrived on the Eastern Front to direct the work of his team not from Berlin, but right on the spot.

While the seizure of Moscow was postponed, it is what is called "stuffed his hand." In August 1941 of the year for Himmler, who had flown in, he gave a demonstrative execution of the 100 Jews, demonstrating the heights of skill achieved by his subordinates. The work of the team Himmler was pleased. By the end of the year, the command of the Einsatzgroup B reported on the destruction of the 45.467 Jews.

However, the blitzkrieg did not work. The Red Army was retreating, but it was retreating with battles, each meter left pouring its own and enemy blood. There could be no question of the imminent fall of Moscow. In the autumn of 1941, Nebe returned to Berlin to the main duty station, where, among other things, the creepos were obliged to catch saboteurs and spies along with the Gestapo.

All this time, Nebe also continued to hunt ordinary criminals, maintained close contact with the British police, Vichy France, and served as president of Interpol in the period of 1942-1943.

As a very informed person, far from stupid and having been on the Eastern Front, Heaven, in 1941, had already noticed with his nose the future defeat of Germany. He did not build illusions about himself, he had plenty of sins. Therefore, when in July 1944 of the year, among the generals of the Wehrmacht, the idea of ​​killing Hitler arose, Heaven joined the conspiracy, hoping to save his life by his participation in it.
Brought by Stauffenberg 20 July 1944, the bomb exploded at the Fuhrer's field headquarters, but Hitler survived. Began arrests.

25 July Nebe did not enter the service and Kaltenbrunner began to suspect something. 5 August found on the beach in Wannsee clothing, in the pockets of which lay a certificate of heaven. The RSHA chief did not believe in the suicide of the head of the kripo, issued a warrant for his arrest and ordered the Gestapo chief Muller to find "this bastard" and be sure to be alive to "tear off his skin."

However, the entire capacity of the Gestapo machine was not enough to find the missing Heaven. Over the head of Heaven was a reward in 50.000 marks, but for the award no one came. Muller summoned one of his best employees, the head of the IVA3 branch, Willi Litzenberg, and asked him to personally look for Heaven.

Litzenberg realized that the usual methods of heaven can not be found. Surely he also has impeccably made documents, and a safe haven, and who, if not the chief of the criminal police, knows how the search system works and how to deceive it. Here you need to act outside the box. He ordered to collect data on the environment of Heaven.

Soon he got a report on the table, from which it followed that the relationship between Heaven and the police commissioner from the women's section Heyda Gobbin went beyond the confines of the office. Litzenberg ordered to deliver to him Frau Gobbin.

The woman passed her lover almost immediately, yes, she knows where Heaven is hiding and give the address. The reason for such frankness was jealousy: Arthur during their last meetings did not show the former love of passion - surely he has another mistress! The idea that a person who had been hiding from the Gestapo for several months might think a little less about sex somehow did not occur to her. A group of 20 people left in the direction of the small town Motzen.

16 January 1945, the SS Gruppenführer, Lieutenant General of Police, Reich criminal director Arthur Nebe was arrested. 2 March he was sentenced to death and hanged the next day, thereby saving the International Military Tribunal in Nuremberg from unnecessary trouble.