A few words about the orders in the American army

November 7 2017
143
At the end of 80's, A. Borovik’s book, How I Was a Soldier in the American Army, was popular. I will not repeat, anyone can find it and read. I remember that while reading it I was struck by hazing in the American army. She was legitimized. That is, a soldier who served a longer period had the right to command a young soldier. As they say, if the mafia cannot be defeated, you need to lead it. Since 80-s have passed the order of years. What has changed in this regard? 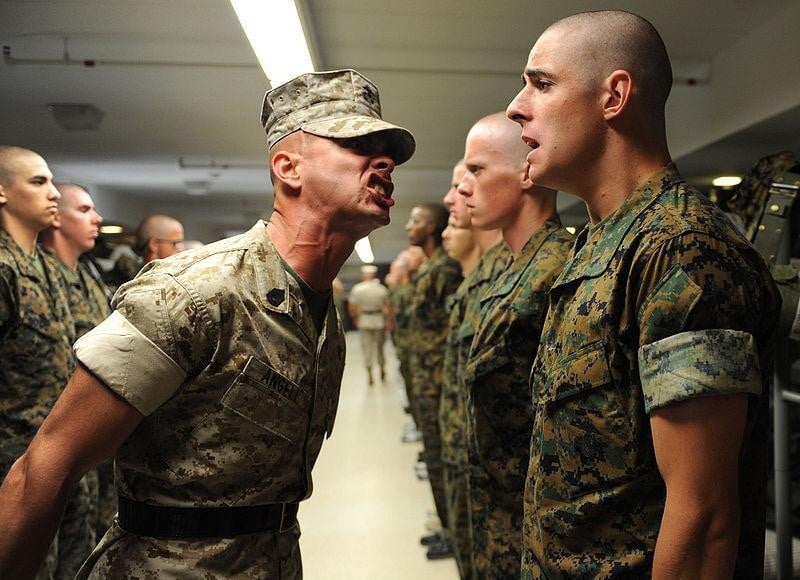 Under the arm came the autobiographical book of the American sniper Chris Kyle. Many have probably watched the Clint Eastwood film, shot on it. The solid American fighter "Sniper" shows how American soldiers are fighting for democracy in Iraq, including the "sea lion" sniper Chris Kyle, who during his service in the special forces of the US Navy killed about 160 people.

After reading the book, I discovered that the director did not show us everything. It seems that the American censor with a caring hand cut out everything that can cast a shadow on the very most armed forces in the world.

Of course, the hazing in the marine corps, and specifically in the special forces SEAL (seals), surprised me most of all. Here is what the author writes: “Newbies who fall into the squad are subjected to“ hazing ”... Young people do all the unpleasant work. They are constantly being tested. They constantly get it. This hazing takes many forms ... During training at the site, we usually ride the bus. Driving is always "young." But it's flowers. By and large, this is not even hazing. But to strangle (not naturally to death) the “young” at the moment when he drives a bus is already hazing. ”

Quote from the book: “Once we left the bar, all the old servicemen took their places at the end of the bus. I sat in front. For some time we were driving at a fairly decent speed, when suddenly I heard behind my back: “one-two-three-four, I declare a bus war to you” ... And they began to beat me. I got out of the car with broken ribs and a fingal under the eye (or two). While I was young, my lips broke into the blood a dozen times. ”

Somehow, after the training sessions, colleagues gathered in a room at the base. “Hey, young,” the chef told me — bring me a beer and another drink from the bus. I rushed for the bottles. When I came back everyone was sitting in the chairs. Only one remained unoccupied, and it stood in the middle. I did not attach any importance to this and sat down in it ... The Chief looked at me. Suddenly a serious expression on his face was replaced by a sly smile. And then they all pounced on me. A second later, I was lying on the floor. Then I was tied to a chair and my “kangaroo trial” began (a parody of justice) ... For every crime in which I was convicted - that is, for everything that the “judges” could recall, I had to drink a portion of whiskey and coke. At some point, I was stripped and put ice in my pants. I finally disconnected. Then they painted me with a can of paint, and with a marker they depicted a rabbit from Playboy on my chest and back ... At some point my friends were concerned about my health. Then I, completely naked, was tied with a scotch to a board, taken out into the street and left in the snow for a while - to regain consciousness. When I woke up, my teeth beat off such a tap from the cold that they almost flew out of my mouth. They gave me a saline solution to stop the symptoms of alcohol poisoning, and finally brought it back to the hotel without untie it from the board. ”

Amazing fun at the US Marine Corps. True, the participant himself does not call it entertainment, and he writes that this is hazing. Corporate solidarity does not allow to take it all out. As the author writes further, it is not accepted to contact the military police, and if you want to serve, you must endure.

After a certain period of service, the author has already become a senior "demobilizer", and he himself began to take part in such "entertainment". Here, several guys who had just completed their training in the SEAL program were seconded to their unit.

“We have shaved one poor fellow. Totally. And the head and eyebrows too. And then with the help of glue from the can stuck his hair back. When the procedure was in full swing, another “young” appeared at the entrance. Are you not going to come in here? one of our officers asked him. "Young" looked and saw that his friend was beaten. “Going. This is my friend". This is your funeral, said the officer. "Young" ran into the room. We respectfully treated the fact that he came to the rescue of a friend, and surrounded him with care. Then we shaved him too, tied them together with scotch and put them both into a corner. ”

These are the customs in the US Marine Corps and, in particular, in groups of fur seals. If they have such an attitude towards each other, what to say about the military personnel of other troops. Here the author writes how he had a fight on a business trip in an army town:
“The incident happened during the exercise, when we were in the army town. I absolutely understood that I had broken my arm about that guy, but there was no chance of getting medical aid in the medical unit. If I tried to do this, the doctors immediately determined that I was drunk and had a fight. Military police would not be long in coming. Therefore, we had to endure until the next day. Being already sober, I turned to the medical unit, where I said that I had broken my hand when I hit the jammed bolt on my rifle. While the doctors were busy with my hand, I noticed in the medical unit a guy who had stitches on his jaw. The next thing I remember was when the police officers interrogated me. ”

Well, the pinnacle of bullying, is bullying officers. I, frankly, did not come across this for the entire service in our army. Lines from the book: “We also mocked the young officer. He received almost everything the same as the rest, but he did not endure it very well. He didn’t like at all that some dirty contract soldiers could mistreat him. I had the opportunity to work with excellent officers, but more often than not the officers' knowledge that “low and dirty” does not go in any way in comparison with the experience of a soldier who has many years of fighting behind his shoulders. Hazing helps remind us who is who and what looks like when shit is thrown over a fan. It also shows people around what to expect from the "young". Think for yourself who would you prefer to have behind you: the guy who came running to save his comrade, or an officer shedding tears for the reason that he was offended by dirty contract soldiers? Hazing are all "young", so they understand - not all the crap they know. In the case of an officer, she serves as a reminder that a dose of modesty will not hurt anyone. ”

But the author of the book describes the stay of the “sea lions” group on the aircraft carrier: “We were on board the aircraft carrier Kitty Hawk. During this period they had very serious problems. Several sailors, who were apparently members of street gangs in the past, constantly provoked violations of discipline. The commander of the ship called us to his place and told us what time the gangsters were doing in the gym. We went down to the simulator, the door was locked behind us, and we solved the “gangster” problem. ” This is probably the only American method to solve a gangster problem, in fact, by gangster means.

These are the "fighters for democracy throughout the world." Such relations in the army surprise me, to put it mildly. I also doubt that we have something similar in the sea or any other special forces. The author of the book treats this as something inevitable, a constant companion of military service. Somewhere trying to convey it with humor, somewhere to submit as a necessity, but in any case, this is clearly not what should be in the army team. I hope this article will be read on the Echo of Moscow, in the American Committee of Soldiers' Mothers and they will finally attend to the state of affairs with the rights of American soldiers.

By the way, the author of the book Chris Kyle, after serving in the army, organized a shooting club and taught everyone to shoot a rifle. A few years later he was shot dead in a shooting gallery by his colleague in Iraq. The reason for this is hazing or something else, история, like Clint Eastwood, is silent.

Ctrl Enter
Noticed oshЫbku Highlight text and press. Ctrl + Enter
We are
About Stalin and KhrushchevWhat you didn't want to know about England
Military Reviewin Yandex News
Military Reviewin Google News
143 comments
Information
Dear reader, to leave comments on the publication, you must to register.