November 3 2017
23
Maydannaya fever continues. Now the disease is at a stage that can be called "Everything against all." Past accomplices become ardent enemies. Well, who would have thought that a “black cat” would run between such “twin brothers” as Poroshenko and Saakashvili one day? Ran, however ... And many who once stood on the same platform, now - on opposite sides of the barricades of the new mini-maydanchikov. 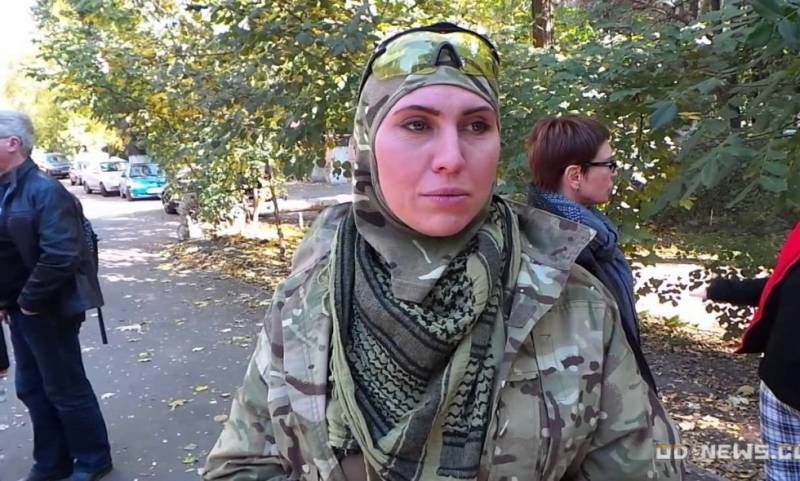 The disease is progressing. The standoff is getting hotter, it comes to explosions and shots. No, this time it’s not about those that sound in the Donbas (although this is a topic that should never be forgotten), but about those that are heard in Kiev and its environs.

October 30 in the evening in the Kiev region, in the village of Glevakha, Vasilkovsky district, was shot by a car in which one of Russia's most ardent opponents, the killer of Donbass Amin Okuev, and her husband Adam Osmayev (who was accused of trying to organize the assassination of B .Putin). Okuyeva was killed on the spot, Osmayev was wounded.

This news Immediately caused a flurry of accusations towards Russia. Say, "bloody Stalin reached out, sorry, Putin." One of those who were among the first to report the death of Okuyeva was Igor Mosiychuk, a deputy from the Radical Party. The one who also recently attempted. And they also blamed this assassination ... who else? Of course, Russia.

"Bloody pastor" Alexander Turchinov said about the murder of Okuyeva: "Russia, continuing the aggression in the east of Ukraine, unleashed the terror in the deep rear, destroying the courageous defenders of our country". He called for a "tough and adequate response."

And there, Anton Gerashchenko joined similar charges. He believes that the "There are two main versions. The first is the actions of Russian special services ... The second is the actions of persons who are in the territory of the Chechen Republic". Both versions put forward by him lead to Russia.

Many radicals have a different opinion, on whose shoulders Mr. Poroshenko drove into power. Now for them the former leader is almost a traitor. They believe that the authorities of Ukraine itself are involved in the attempt on Mosiychuk, as well as the shelling of the Okueva car, and they fear for their own lives.

Along with this squall, there were numerous calls to name the streets of Ukrainian cities in the name of the deceased sniper. Her styled "Amazon", "heroine", "defender of the country." They recall that 1 of June of this year had already attempted assassination of her husband, and then she wounded the killer with an accurate shot.

Well, there is no doubt that Okuyeva can shoot. According to some reports, she took part in the Chechen war, where she converted to Islam and changed her name. But the various media reports about her are contradictory - perhaps she was not at war, but was the wife of one, then another, action movie. Such a mysterious person.

Even its origins are different. One of the versions says that her real name is Natalya Nikiforova, and she has nothing to do with Chechens. According to other sources, her father was a Chechen, and Nikiforov was a stepfather. She was born in Odessa in 1983 year. At the end of 90, she lived in Moscow, where she even tried to make a career as a model. But something, apparently, went wrong, and pathological hatred for Russia and the Russian people was born in the soul.

If they rejected the version that she fought on the side of Chechen separatists in 1999 - she still had a lot of blood on her hands - it is certain that she participated in punitive operations in the ranks of the Kiev-2 battalion, she served in the so-called "International Peacekeeping Battalion named after Dzhokhar Dudayev ”.

Her statements - a solid painful Russophobia. Here are some of them: "There are a lot of people around the world who want to fight precisely against Russian imperialismbut"; "In December, on the Maidan, I wanted to warn people about Russia. Yanukovych is a rag doll pulled by strings. Putin is behind all this."; "I really respect Stepan Bandera as historical personality».

Only now studied "heroine" ... at the doctor (after his return from Grozny to Ukraine). I mean, it is formally a representative of one of the most peaceful and humane professions. And even tried to fulfill their direct duties on euromaidan.

But ... There is information that there she took on a completely different mission - to torture anti-Maidan prisoners (journalist Sergei Rulev reported this in her blog, who was captured by those who raged on Kiev streets in the days of Maidan). Further more. In the punitive battalion "Kiev-2" Amina (or Natalia, how to name her there?) Joined as a medical assistant, but quickly turned into a killer. Talking about the Hippocratic Oath is not necessary ...

When she tried to run for deputies from Odessa, on her election posters, she appeared as a jihadist: in a hijab and with a gun, under the slogan "Saving Ukraine." The Odessans, however, did not need such a savior and “rolled” her — a brutal maiden scored a little over three percent of the vote.

Even after the death of a sadist and murderer, various rumors continue to circulate around her. In particular, that in fact this shooting is a dramatization.

One of the reasons for such rumors was that they had to say goodbye to Amina in the Islamic center of Kiev. However, in fact, she was quietly buried in Dnepropetrovsk (we will not recognize the stupid renaming of this city to the Dnieper!). Like, "the family wanted it." In addition, photos of these funerals were published. But they can not see damage to the head of the deceased, although, according to the official version, she received two wounds to the head. 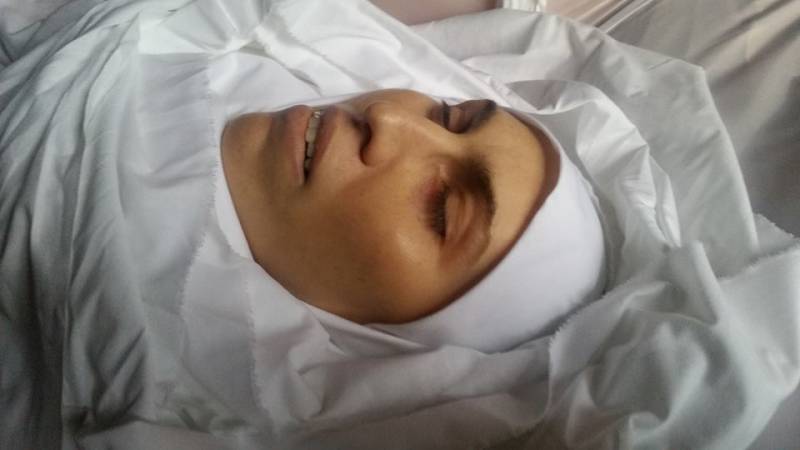 This version is most likely from the field of conspiracy. Approximately the same can be said that Hitler did not commit suicide in 1945, and after that he lived in secret for a long time.

But what if the conspiracy version does have any basis? No wonder that quite serious sources talk about it ...

It is impossible not to recall her promises to cut the Russian heads, as well - the desire to carry out terrorist acts on the territory of Russia. And if the death of this woman is a dramatization, then we can still face an experienced saboteur capable of any, even the most cruel, crime. Although, of course, without her saboteurs enough. One more, one less ...

Or, taking into account the hostility in the camp of the maydanovtsy themselves, as well as the growing distrust of the West towards Poroshenko, Peter Alekseyevich has yet to face with such an unexpectedly emerging activist? There is something for him to think about at his leisure, in the interval between the reprimand of the next accusations against Moscow.

Ctrl Enter
Noticed a mistake Highlight text and press. Ctrl + Enter
We are
Reports from the militia of New Russia for 27-28 September 2014 of the yearResults of the week. "Well, do not change me because of every idiot!"
23 comments
Information
Dear reader, to leave comments on the publication, you must to register.