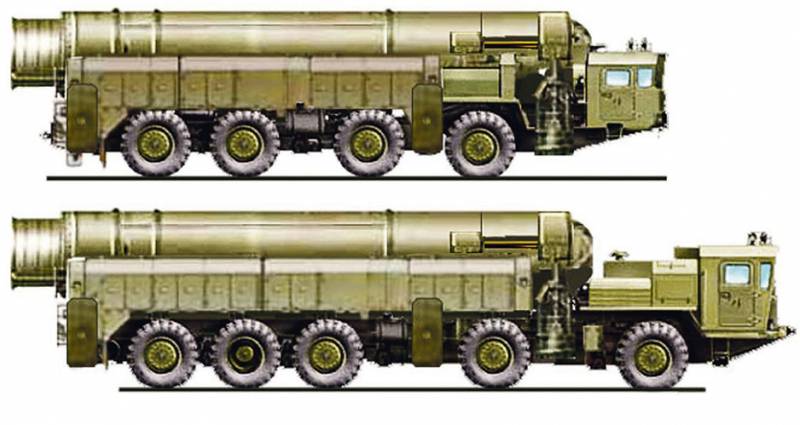 Russia has an instant and truly mirror - by definition, the Supreme Commander - a response to a possible US withdrawal from the Soviet-American Agreement on the Destruction of Intermediate-Range Ballistic Missiles (signed in 1987 and entered into force on 1 on June 1988), " To the military-industrial courier "a source working in the rocket and space industry.

“If the Americans return to deploying infantry ballistic missiles in Europe, as it was before the implementation of the agreement, this will mean that the flight time of American ballistic missiles to Russian strategic facilities in the European part of the country will be reduced to seven to ten minutes,” the expert recalled. According to him, we are not talking about American ground-based KR, with which it is theoretically possible to charge anti-missile launchers deployed in Eastern Europe. Most likely we are talking about the ballistic missile system, which they used in violation of the INF Treaty as target missiles in testing the missile defense system. Several dozen launches of such missiles were carried out, testing was underway at the same time, and now nothing prevents them from being used as a striking means. Russia has a mirrored answer to such a threat: it is enough to deploy appropriate weapons of destruction in the Arctic region, from where the flight time to American strategic targets will be approximately the same. The costs for this will be minimal, especially if you use island territories, for example, Kotelny Island, where recently one of the four tactical groups of the Northern fleet.

Speaking about the technical component of Russia's possible response, the source suggested recalling the compact solid-fuel intercontinental ballistic missile (ICBM) 15Ж59 "Courier" (according to NATO classification - SS-X-26) developed in the USSR, which was supposed to travel around the country in a standard standard container : its length was only 11,2 meters, and weight - 15 tons. There have been several successful launches of this rocket. But on October 6 1991, the project was terminated as a result of "mutual agreements with the United States to stop the development of light-class ICBMs."

There is every opportunity to quickly return to this development of the Moscow Thermal Engineering Institute, and at a new technological level, the source said. Moreover, formally the project does not contradict the agreement on MRBD.

As for the response to a possible withdrawal of the United States from the INF Treaty by the deployment of an additional number of Iskander operational tactical missiles in the Kaliningrad region, “this is not a step that the United States will fear. "Iskander," even with the range attributed to him by the Americans, will never hit objects in the United States. " At the same time, “our response to Trump” using the heirs of “Courier” is characterized by the multiplicity of basing. It is physically impossible to calculate exactly the shipping container inside which the rocket is located among thousands like it, especially in the vast spaces of the Russian North. It can be placed on any suitable sites of the Arctic islands, protected by fighters of the tactical groups of the Northern Fleet, shuttle navigated along the Northern Sea Route, be on any wintering grounds for Russian polar explorers.

“It is clear that nobody needs it, and first of all Russia. But if the Americans take the first step, they will reap what they have sown. They will receive operation “Anadyr” in a modern format, ”the interlocutor of the Military Industrial Courier recalled, recalling the operation to transfer to Cuba during the Caribbean crisis the Russian medium-range ballistic missiles P-12 and P-14 with nuclear charges.

Ctrl Enter
Noticed oshЫbku Highlight text and press. Ctrl + Enter
We are
What you didn't want to know about EnglandWhat we lost
Military Reviewin Yandex News
Military Reviewin Google News
32 comments
Information
Dear reader, to leave comments on the publication, you must to register.