Why ukronatsii go to Catalonia and return to Russia 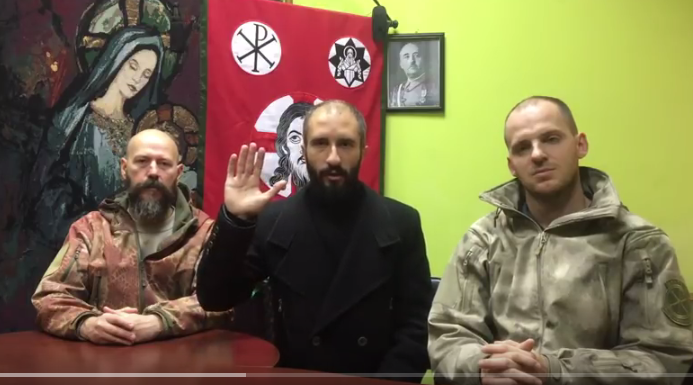 The ideas and slogans of Ukrainian neo-Nazis of all types and forms (from the Russian Nazi Azov to the OUN Bandera) ** could be treated with a smile if, in fact, tens of thousands of people were not killed and maimed - from the first killings on Rymarskaya Kharkov and burning in Odessa to the latest murders in criminal and political clashes throughout Ukraine.

The events that followed the referendum in Catalonia provoked a surge and turbulence in ..., which grew into a formation from the surviving "ATU heroes" of the rescuers battalion of Spain. Rusty cyborgs urgently poured in ... oil in the hinges, hurrying to enroll in the Catatonia battalion - the places are limited by a lean budget - all in a rented container for biowaste will not fit.

"On the basis of the All-Ukrainian Union of ATO veterans, a battalion has already been formed, which, at the first call of the Spanish people and the Spanish king, is ready to weapons in the hands to go to the defense of the unity of the Spanish state ", - cyborg, swearing together by numerous boilers, swear.

Frightened by the determination of the “iron hundred”, the head of the rebels Putch-Demon managed to escape to Belgium, the remaining rebels under the protection of the Spanish police hurriedly left the barricades of papers in their offices, the population of Catalonia subsided like mice under a broom.

“Otherwise, they will come from the ATO and it will be atoms,” the Barcelona mothers intimidated their young separatists with cotton in their ears.

Thus, with one decisive warning, the integrity of the Spanish Kingdom, the European Union and the Western World as a whole was preserved.

In each joke only a joke share. And in fact, the willingness of neo-Nazis to migrate anywhere and for anything, is not a joke. Remember what God said in the well-known joke: "I used to collect you for these ships for ten years."

Neo-Nazis of all colors of the rainbow who have survived in boilers and criminal squabbles are in the same situation today. Gnawed among themselves, hated by the people and their own power, by and large not needed by anyone, not even to themselves, they are torn in the borders, which are still controlled by the Kiev regime, and cannot leave the ship that is popping at the seams.

A striking example is the punishers from the Dudayev (Munaev) battalion. The terrorists recruited throughout the European Union from among the terrorists who had fled from the Caucasus, they came to the Donbass as heroes of the Savior and ... And that’s all. After the death during the flight from the Debaltseve battalion commander Isa Munaev, the heroism dried up. The press attache of the battalion from Odessa Okueva flashed on Kiev TV programs several times, the new commander Osmaev (Okuyeva's next husband) was increasingly found in Kiev, participating in some dubious disassembly. The battalion did not receive official status, even under the laws of the Kiev regime, being an illegal armed group. Members of the illegal armed groups, even though they had documents from citizens of different EU countries, did not receive Ukrainian citizenship. At the same time, in the European Union, the courts were awaiting them, with the prospect of not even a prison, but deportations to Russia, Azerbaijan and other countries, waiting for them with open arms.

The attempted assassination of Osmayev and the murder of Okuyeva clearly demonstrate not the "long arm of the Kremlin", but unsuccessful attempts to move the local criminals in the fight for a piece of bread. Everything has long been divided and the local is not enough. About some ideals we are not talking for a long time.

Recall how during the “Mihomaydan” in Kiev, a combatant of the same unlawful armed group of the OUN Kohanovsky shot a fellow in arms and convictions of a member of the “Right Sector” Ruslan Kachmala. Although both were supposed to rally near Rada, they shared a controversial hostel. “Pravosekam” paid for his resettlement, OUN - for “protection.” And they both didn’t give a damn about Saakashvili’s declared support for them - they went to share the money.

Therefore, it is not surprising that supporters of neo-Nazi in an interview with Kiev media predict the destruction of all "patriots" without the participation of Putin and Donbas militia. After the shooting of Okuyeva, these moods became even more acute. Especially against the background of the authorities' clear reluctance to investigate the murder - Okuev was buried without waiting (and not conducting) a forensic examination.

The permanent press secretary of the banned "Right Sector" Artem Skoropadsky explicitly stated that they would kill all nationalists. Bragging to reporters, he said: "This is true. Only not very scary. On ... I turned all these murderers."

Who, whom and on what exactly will turn, will show the near future. But obviously the Nazis who are not willing to die are now in a state of disorder and vacillation. While some of them are trying to find the courage to go on assault by their own established authority, in an attempt to somehow gain a foothold and defend themselves, the second half leaves the Nezalezhnaya limits, even if stuffed, even in Russia. .

Another such "refugee" was recently convicted in the Chelyabinsk Region for serving in the Azov battalion in November 2014.
So leaving for Spain under the specious pretext of defending "brothers" for them is not the worst option.

PS People, be careful. Often, a neighbor who lives next to you with a coloratum knocked out on his forearm may not be the “Russian nationalist” to which you are located.

* - play on words. In Serbian penguin - Pindos, a contemptuous name for the Yankees. “Greek-Pindos - salty nose” was forgotten (Greek Πίνδος were originally Greeks behind Pind, then simply Greeks in Russia, then negros).

** - almost all the mentioned persons and organizations are terrorist and professing misanthropic ideas. They are banned in Russia, criminal cases are initiated against a number of persons, the regiment "Azov" was awarded the attention of the US Congress, which forbade rendering assistance to it. At the same time, de facto all the structures of Azov are supervised by Roman Zvarich, who renounced US citizenship after being distributed to Ukraine.

Ctrl Enter
Noticed a mistake Highlight text and press. Ctrl + Enter
We are
Europe's Disintegration: Are National States Waiting for Disintegration?Catalonia: Goodbye, Spain?
26 comments
Information
Dear reader, to leave comments on the publication, you must to register.