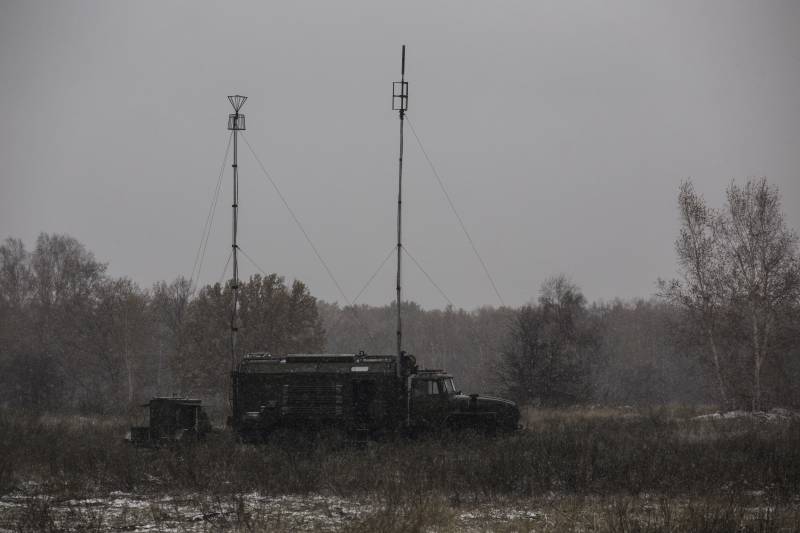 Another representative of the equipment of the EW troops, a very well-deserved, automatic station for jamming the P-934U or Sinitsa.

In the process of improvement and modernization, the ability to work on ground radio points, both fixed and mobile, was added.

The calculation of the station will not be confused by the fact that the enemy’s radio stations have a programmable frequency tuning function (frequency hopping) and the ability to transmit digital short messages in the telecode mode. “Tit” will suppress everything that it can reach.

Checked by its predecessors P-934B during both Chechen campaigns. 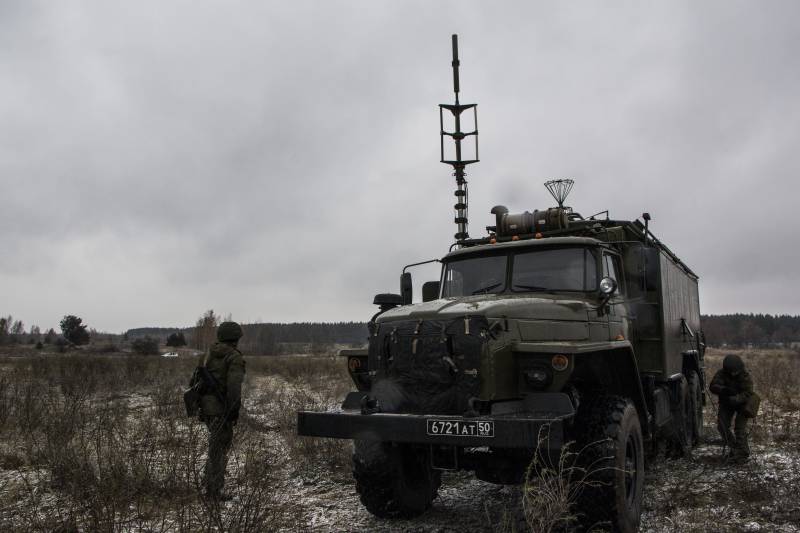 But the main purpose of the P-934U is to create interference for aviation. Noise, impulse, aiming and misleading interference modulated both in signal amplitude and frequency.

If you translate into a normal language, the main task is to disrupt the targeting of strike or fighter aircraft of the enemy, a violation of coordination between the aircraft, as well as blocking data transmission from the onboard reconnaissance aircraft.

"Tit" can also be used to communicate with their aircraft or ground points.

P-934U can work in standalone mode, in the pairing mode with another station or under the general management of a single command center of the Diabazol complex.

In the autonomous mode of operation, the station detects radio emission sources in a given frequency range, direction finding and automatically analyzes them. A list of known frequencies is formed, from which the operator, at the direction of the station commander, creates lists of prohibited and intended for suppression.

The signals of monitored fixed frequencies are heard on the dynamics of the station when they appear on the air. If necessary, voice information can be recorded on a built-in electronic tape recorder. The signals for listening and recording are selected both manually and automatically. After analyzing the information, a list of priority frequencies to be suppressed is formed. When the station commander receives the permission (command), the station is switched to the mode of suppressing radio emission sources from this list.

Offline mode is more efficient because it uses one station, which can be quickly deployed and begin combat operations. There is no need to determine your own coordinates, the procedure for entering into communication and synchronization with the paired stations.

In the coupled pair mode, there are two stations spaced along the front to 10 km. In this case, they exchange information among themselves via a radio relay channel. According to the bearings determined by the calculations, the coordinates of the object of suppression are determined.
When working with a control center, all received information (except speech) is sent to it for analysis, after which the targets are distributed between stations.

The station allows continuous operation for 24 hours, with a ratio of working hours for receiving and transmitting 3: 1.

The time of deployment and bringing the station into a combat position is no more than 30 minutes. Experienced calculation fit in less time. 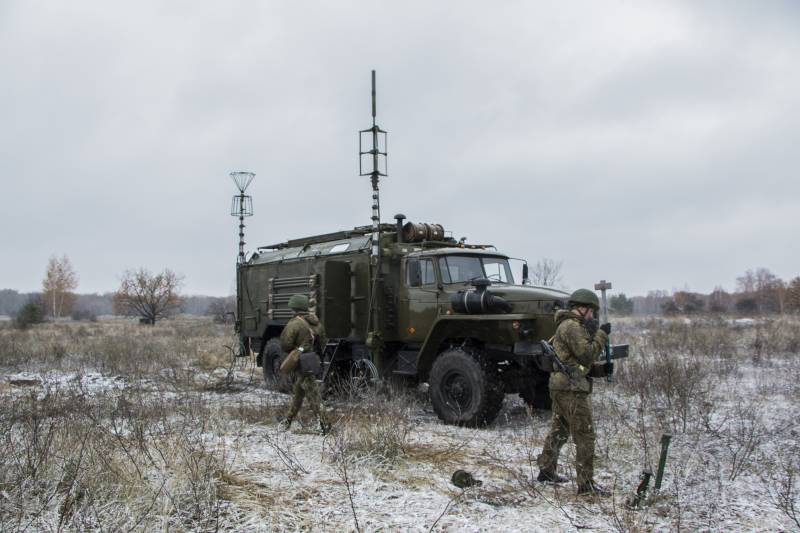 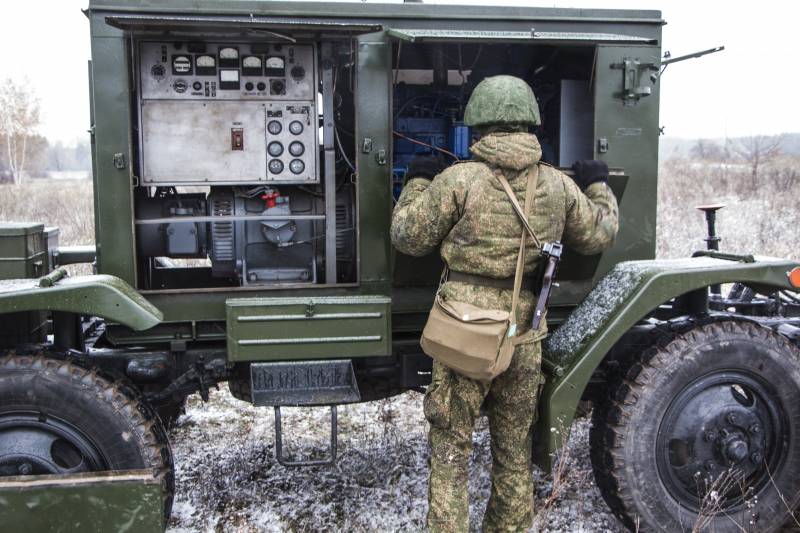 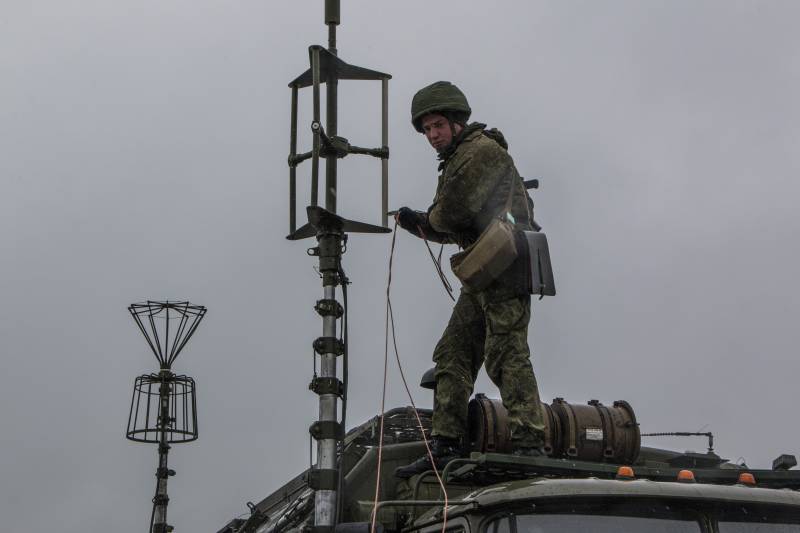 The calculation proudly demonstrated the engine of its "Ural" after the next repair. The envy of lovers of powerful V-type in the American style. 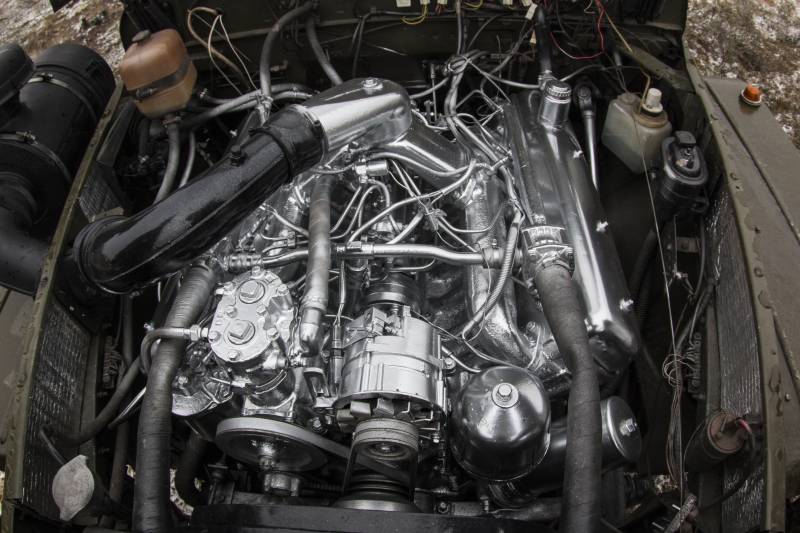 Inside kunga space is not enough. There is a place for the operator, and, perhaps, everything. The rest is filled with cabinets with equipment. 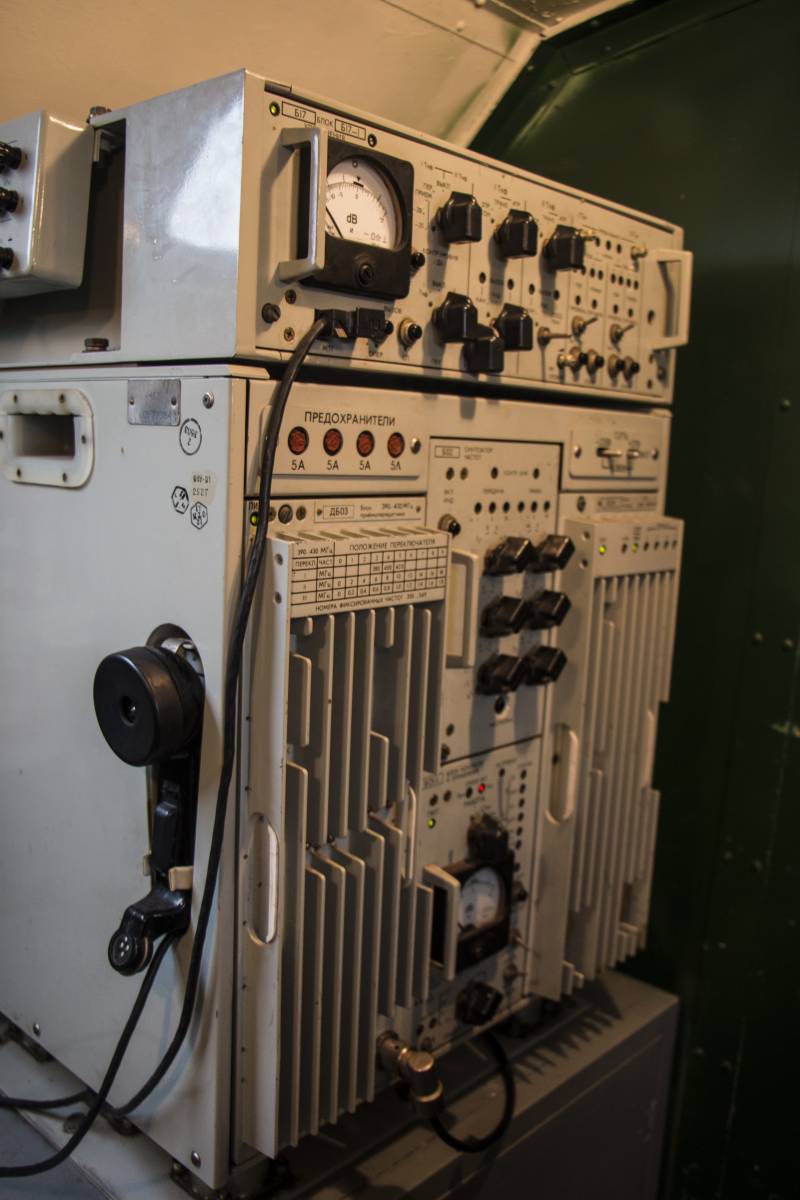 And two tables as the workplace of the station operator. 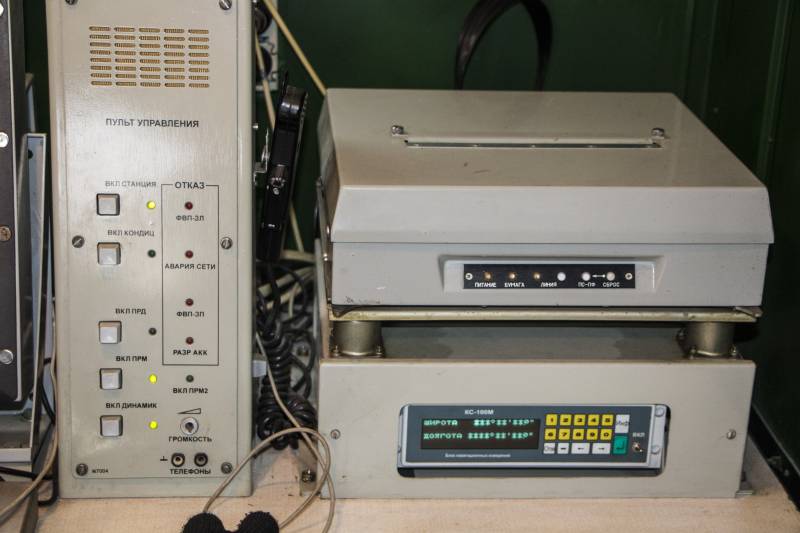 On the first straight standard set: sistemnik and printer. Printer surprised. But the thing is apparently necessary, since it registers all the victories (or misses) of the operator and dumps it on the desk to the command on paper. 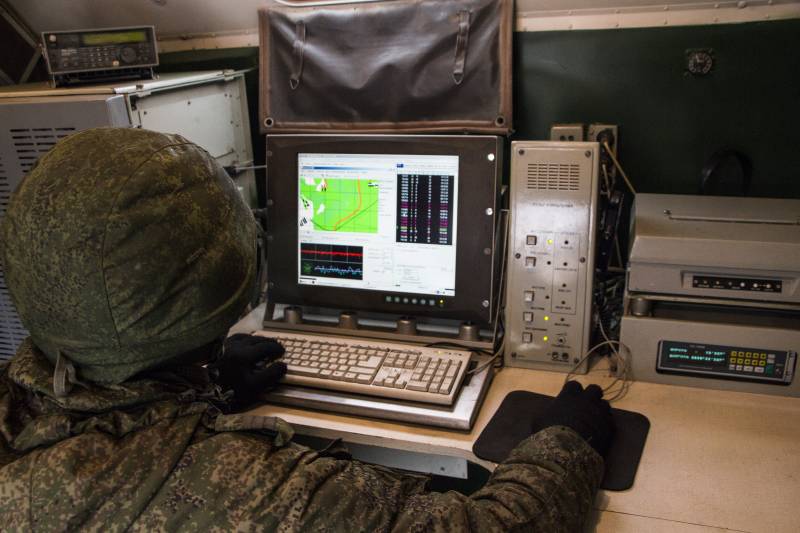 Well, the operator himself fully armed. 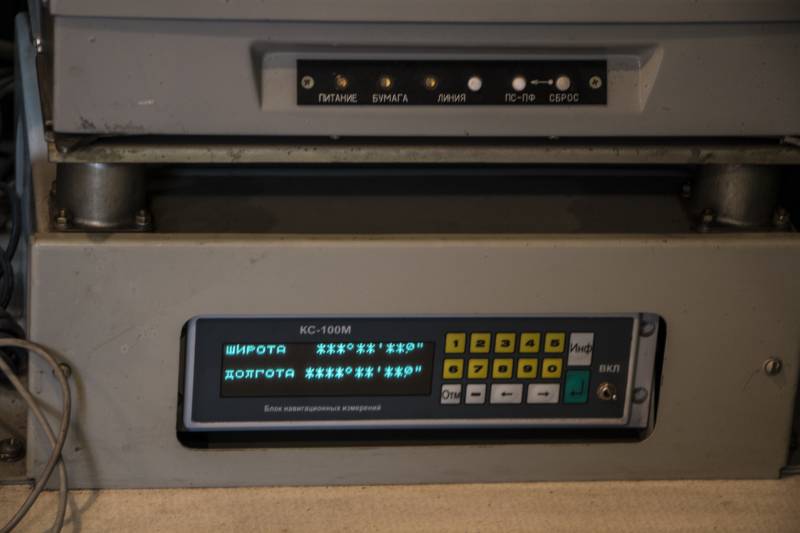 Yes, another set includes the GLONASS navigator. But since "Tit" stood meters in 100 from "Resident", the navigator showed zeros. As well as all similar devices in the district.

But the work with the rest of the equipment did not affect the neighborhood with the “Resident”. 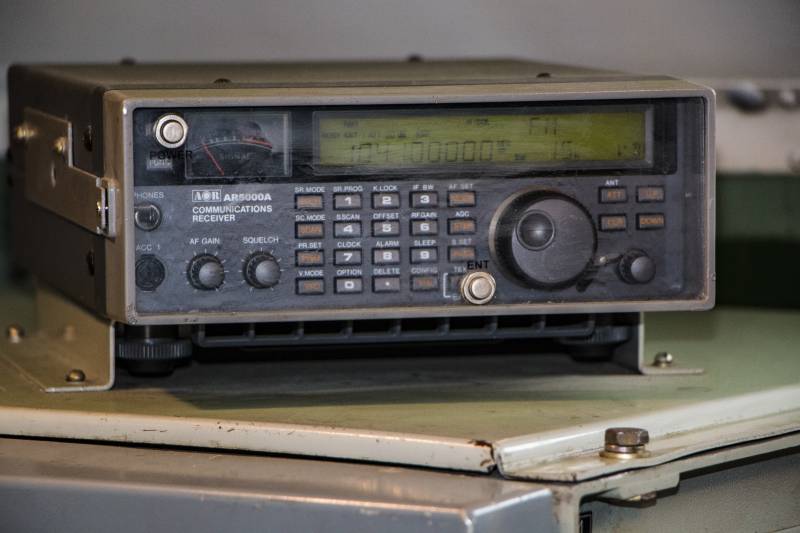 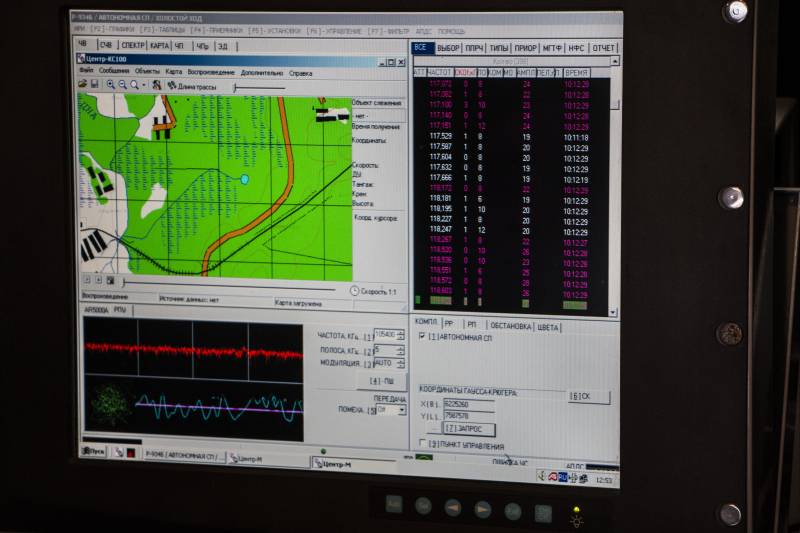 Everything worked as expected, and the task was completed.

What else can be said about "Tit"?

The calculation of the station with which I spoke, very, very high opinion of his combat vehicle. Glancing in the direction of "Krasukha", around which the rest of the correspondents crowded, the fighters, without detracting from the possibilities of the one, frankly praised their "Tit".

The arguments were very reasonable. Minimum mechanization when unfolding. If there is nothing to break or wedge, then nothing will break. Especially in disgusting field conditions in the form of snow, rain, or, for example, wind and sand.

"Krasuha" is a rapier. A very small angle of working capture and suppression. "Tit" is a cudgel that can stun the range for all 360 degrees and for the entire depth. At once. Moreover, the range of work at "Tit" is no less.

Of course, every normal sandpiper praises its swamp. One can argue for a long time that it is better that the aircraft radar was cut down or that it was completely deprived of its connection with the point of guidance, reconnaissance aircraft, airplanes of its group and dispatchers.

As in an amicable way, both are better at once. And even without bread. In a sense, you can not “plow” the “Resident”, so that at least on a cellular phone the pilots can report the cataclysm that has befallen them. Before a completely reasonable ejection or forced landing.

In general, the guys were looking forward to travel for the P-330BMV. Expecting new impressions and new features from the new station. It is possible that in the near future we will get to know the new APS coming into service of the radio-electronic troops.

Ctrl Enter
Noticed a mistake Highlight text and press. Ctrl + Enter
We are
Dome over the Ministry of DefenseHow can the Russian army "blind" the enemy
3 comments
Information
Dear reader, to leave comments on the publication, you must to register.