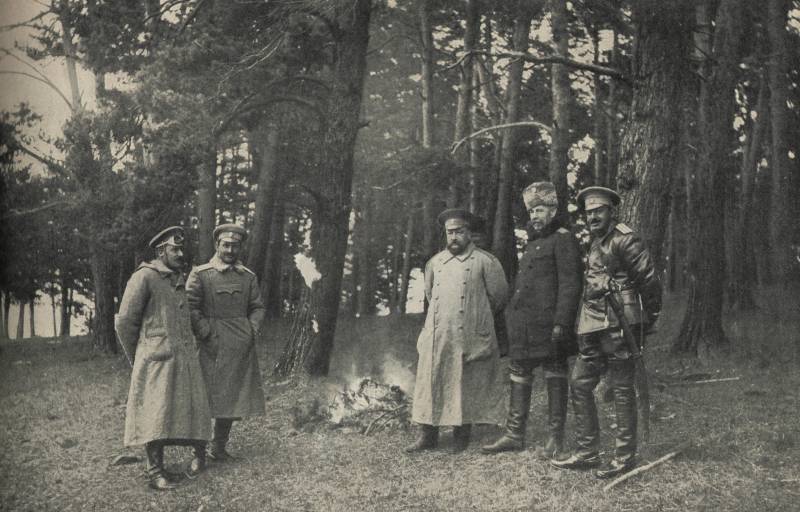 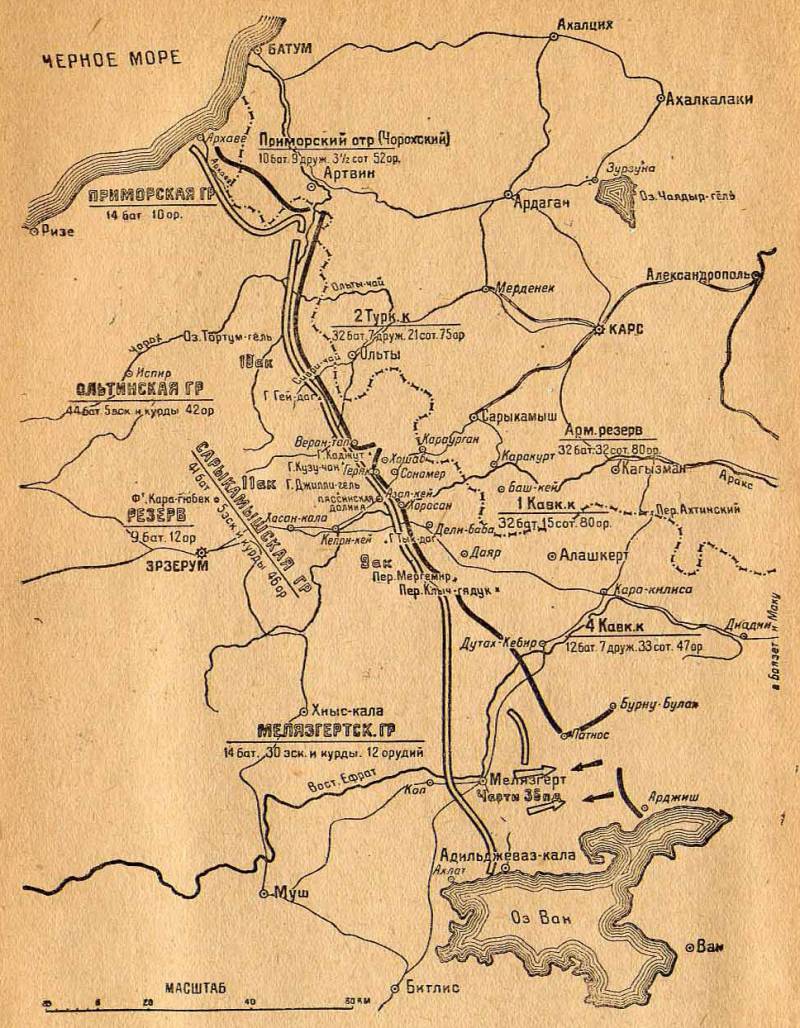 4-I Caucasian Infantry Division went to the enemy to the rear, and 04. 01. 1916. The Turks began to retreat to Erzerum. Having made a difficult transition through the mountains, on January 7, the Russians managed to reach the ridge of the Virgin-slaughterhouse. And February 3 fortress, considered impregnable, was taken.

In the Erzerum operation, the Russians captured over 20000 Turkish soldiers and officers, captured over 450 guns. The Turkish 3 Army, having lost more than half of the composition and almost all the artillery, was defeated.

Erzerum operation was carefully thought out and correctly implemented. British experts noted that the only army that could win in such difficult conditions was Russian. The key to success was the power of the Caucasian army and the strategic and organizational skills of General Yudenich [19]. Taking the position of Virgo-Boyne, considered impregnable, was a feat that surprised the allies of Russia and left a painful impression in Berlin [20]. The Turks lost the largest operational base at the junction of the most important roads - as a result, the coherence and solidity of the entire Turkish front were destroyed. [21].

The fall of Erzerum required an urgent transfer by the Turkish command of reinforcements to the Caucasian theater of war from other fronts - and the situation for the British troops in Mesopotamia and in the Suez Canal area was alleviated. In the summer of 1916 in the Caucasus theater, besides the 3 army, the Turks concentrate the 2 army transferred via the Baghdad railway. 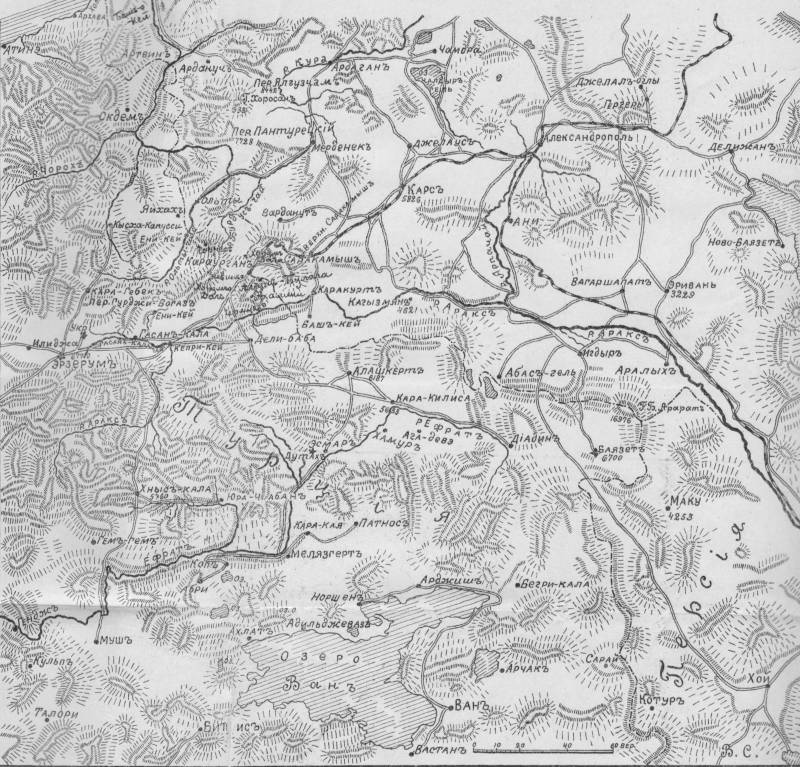 Operational actions of the Primorsky detachment with the support of the forces of the Black Sea fleet in the Trebizond operation 23. 01. - 05. 04. - the standard combined operation of the ground forces with the support of the fleet. 21. 02. a landing was landed in the rear of the Turkish troops, and 24. 02. was taken by Rize. On April 5, the Russians entered Trapezund, after Erzurum, the most important communication center of the Turkish troops and an important administrative point.

In Erzincan operation 18. 05. - 20. 07. Erzincan, the most important transportation hub, fell into Russian hands. And in the Ognot operation 21. 07. - 29. 08., Despite the superiority of the enemy, the troops of the Caucasian army defeated the 2 army, capturing the city of Mush. In the last operation, 3 Russian Corps was opposed by Turkish 4, Russian troops lost about 20000 people, Turkish - about 60000 people.

By the end of this campaign, the Caucasian Army operating in the theater of operations had overfulfilled all the tasks facing it, and the Transcaucasus was secured from enemy invasion on the whole huge front. After the fall of Erzerum, the Turkish government begins to look for a way to a separate peace. 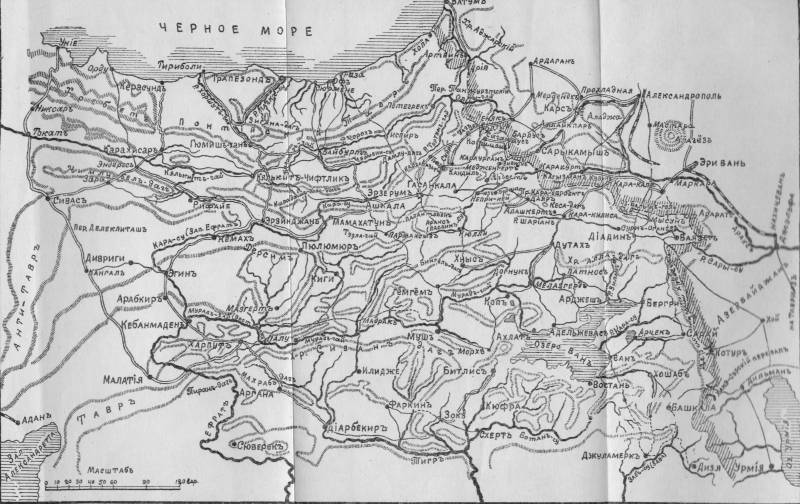 The Caucasian army fed the German-Austrian front, actively interacting with the allies. Army operations are the standard of excellence and the embodiment of the Suvorov principles of warfare. In the Caucasian theater in 1916, one Russian army defeated two Turkish forces.

If we briefly touch the losses of the enemy on the examined theaters in 1916, then the following should be noted.

In the Baltic-Belorussian theater of operations, German troops lost about 100000 people (only the Naroch operation, Baranavichy and the Mitava operation cost them 40000, 40000 and 3500 people, respectively).

The greatest losses were incurred by the enemy in the Galician and Romanian theater. During the battles with the South-Western Front, the Germans were forced to transfer (in addition to their troops already concentrated on the Galician TVD) in June-November, Russian-Romanian front units of the 34 infantry divisions that suffered heavy losses (for example, A. von Linsingen’s army only in May, lost more than 82000 people - 51% of its composition). In total, during the Offensive of the South-Western Front, the Austro-German troops suffered a total loss of more than a million people (only prisoners by November 1 - up to 9000 officers and 408000 soldiers). Western historians, considering the Brusilov offensive to be the biggest victory of the Entente 1916 of the year, lead to higher numbers. So, D. Keegan believes that in these battles 400000 Austrians were captured and 600000 Austrians were killed and wounded. German troops opposing the offensive of the South-Western Front, lost 350000 people [23].

The losses of the South-Western Front during the entire 1916 campaign were most severe - only from the beginning of the Brusilov breakthrough (22 in May) to 30, they amounted to half a million soldiers and officers (62000 killed and wounded from injuries, 377000 wounded and sick, around 60000) missing [25]). Total losses of the Russian army for the operation - up to a million fighters [26].

The losses of the Turks in the Caucasian theater in 1916 were more than 100000 people. As we noted, only during the Erzerum operation more than 20000 Turks were captured. In the Erzindzhan operation, troops of the Caucasian army captured 17000 prisoners (many Turkish companies left 20 — 25 fighters and the 3-i army, having lost combat capability, could not combine their efforts with the actions of the newly arrived 2 army transferred to the Caucasian theater of operations in order to reverse operational strategic situation). The Turkish armies were defeated in turn - during the Ognot operation 2, the army was also defeated and lost about 60000 (from the original 81000) man.

As a result, by the end of the year only 3 remained in the 78 army, and the 2 battalion remained in the 64 (the total strength of the 309 battalions was previously). Army reduced by more than half [27]. But in their ranks joined the 126 battalions (14 infantry divisions), previously participated in the Dardanelles operation: 10 in the 2 army, and 4 became part of the 3. The divisions of the Dardanelles veterans, distinguished by their high fighting spirit and having a positive combat experience, were milled in the Caucasian theater of operations, without hitting Mesopotamia and Syria.

16 infantry divisions of the Turks were recreated after their destruction in the Caucasian theater of operations (including 5 divisions - twice). In 1916, the battles were destroyed in the battles: in the 3 Army, 9 divisions, and in the 2 Army, 4 divisions.

All Eastern Front theaters performed important functions.
The Baltic-Byelorussian theater of military operations took over the bulk of the German formations on the Russian front, the Galician theater of war performed a strategic attack task, and the Romanian and Caucasus theater of operations solved the most important coalition tasks.

The 1916 campaign allowed the Entente to seize the strategic initiative - and, above all, thanks to the efforts of the Russian army in the field. 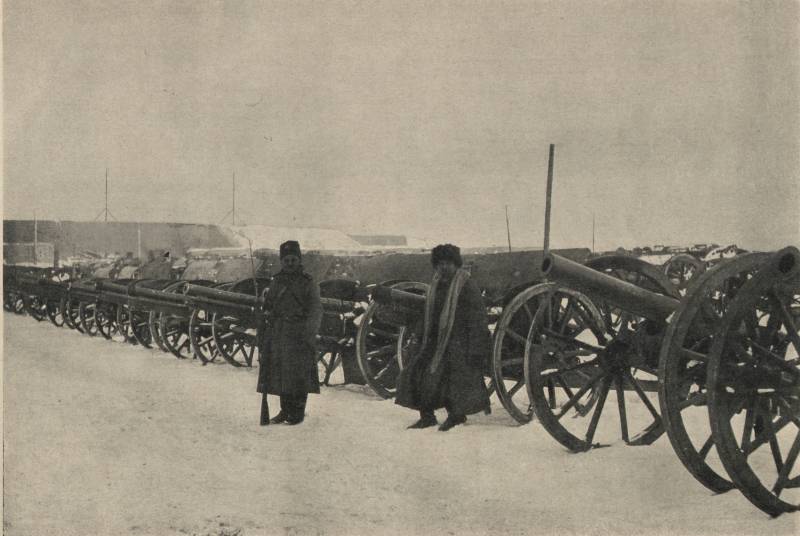 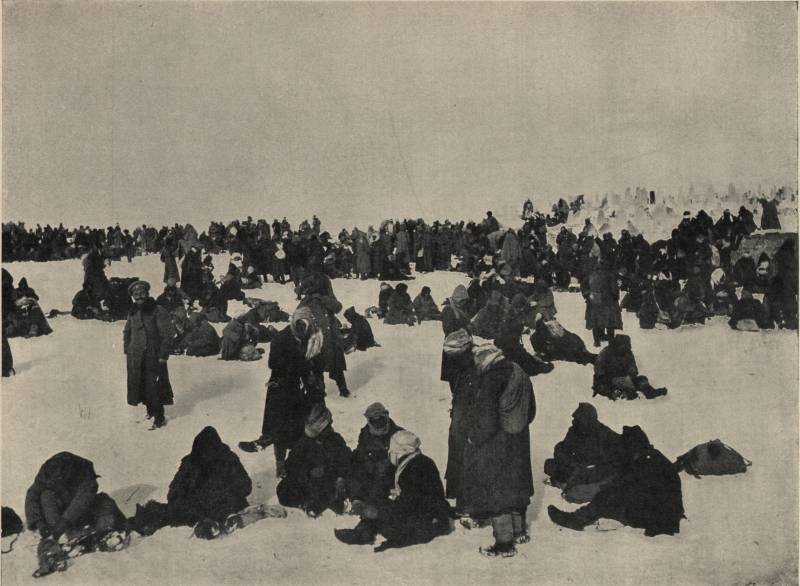 Trophies of the Erzerum operation. Pictures of war