Central to the 1916 campaign was the offensive of the Southwestern Front, which began on May 22. Traditionally, the Galician theater of war was the main theater of operations of the Eastern Front of the First World War.

The timing of the attack was shifted because of the need to provide urgent assistance to an ally - Italy.

The experience of a positional war recognized it necessary to break through the enemy front in one direction - concentrating for this a maximum of troops and artillery. This made it possible to better operate with available reserves and technical resources. But the tragedy of the “meat grinders” of the positional period of the world war stemmed from the fact that the enemy had guessed about the place of the breakthrough — the artillery preparation region and the tightened reserves. The effect of surprise was lost, and the enemy, in turn, pulled up reserves in a threatened area. Having breached the enemy defenses, the attacker was forced to pull up his reserves, ammunition and move around in a “lunar landscape” of the terrain plowed by artillery, which sharply reduced the mobility of the troops that had broken through (even more so if there was no army mechanization). At the same time, defending from the depth of his defense (that is, with an intact infrastructure), he transferred (more quickly) his strength and resources - eventually closing the breakthrough. There was a hopeless race for the attack: he was trying to push reserves through the throat of a breakthrough, while the defender was pulling reserves on untouched roads. Of course, the forces of the parties soon balanced and the offensive faded. Such was the essence of the positional impasse.

The commander-in-chief of the cavalry, A. A. Brusilov, from the South-Western Front ordered the enemy positions to be broken through on the 4 (army) sectors - this made it possible to disperse the attention and forces of the enemy, depriving the latter of the opportunity to fully maneuver reserves. Artillery preparation in 4 points did not allow to establish the direction of the main attack. Moreover, in each army there were several shock corps sites. 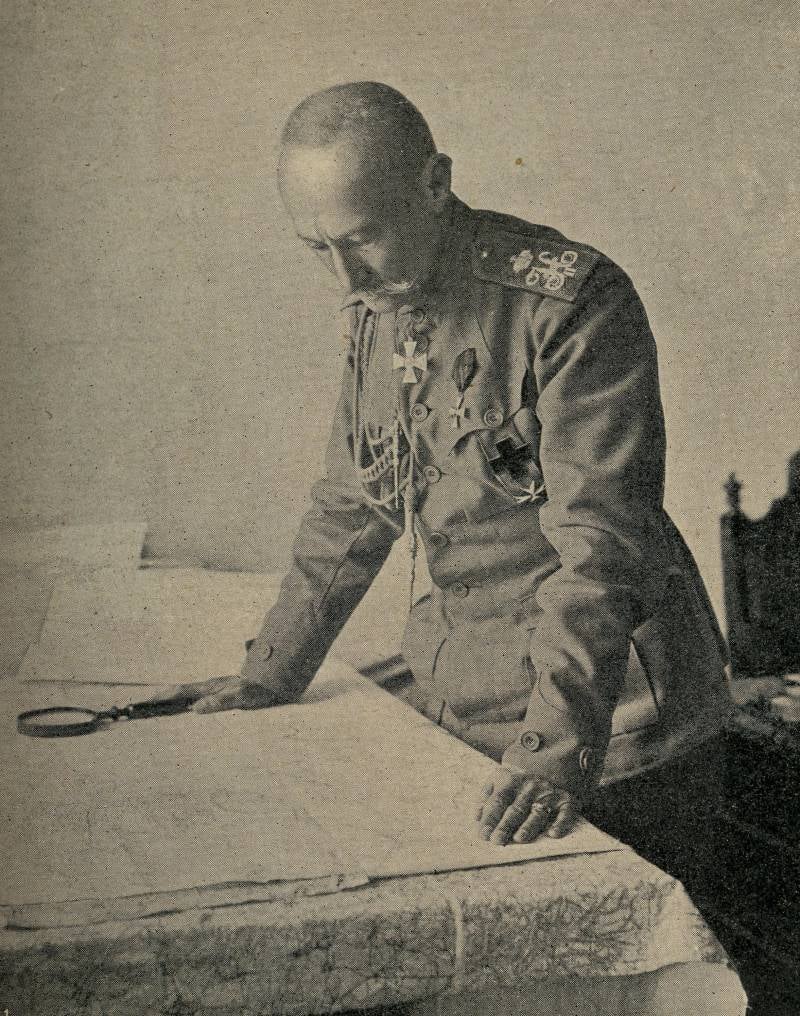 Cavalry General A. A. Brusilov

The 22 May artillery roar of the Southwestern Front marked the beginning of the Brusilovsky breakthrough. At the 1 stage of the offensive, the front delivered 4 main and 7 auxiliary strikes. The armies carried out the Yazlovetsk, Lutsk, Sopanov, Dobronoutsk operations. Before the 8 of June, the main line of attack of the 2 Army was Lvov, but actions were also developed in the direction of Kovel - to interact with the Western Front (the beginning of the offensive was postponed).

From 3 June, 11-I and 8-I armies repelled the enemy’s counterstrike. By the tenth of June, the 9-I army forced the river. Prut, having mastered Chernivtsi, continuing the pursuit of the enemy. 6 June its connections came to the p. Gray

11 June The 3 army was transferred to the front, and the commander ordered the 3 and 8 armies to capture the Gorodok-Manevichi area. The armies broke through the enemy defenses, inflicting defeat on the enemy, and on June 24 was given the task of seizing Covel. Although their offensive was then suspended, the 3 and 8 armies inflicted a series of defeats on the German forces.

June 11 left-flank armies of the front (7-I and 9-I) were ordered to continue the attack on Stanislavov and Galich, and the central (11-I army) was to hold positions. 17 - June 20 The Germans launched a counterstrike on the 8 and 9 armies, but with heavy losses were repulsed. 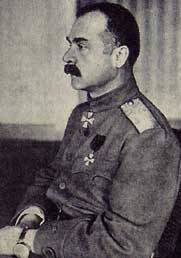 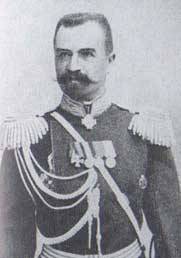 The second stage of the Offensive began on June 22. The command of the enemy was very alarmed. E. von Ludendorff noted the Russian attack east of Lutsk, in the bend of Styry - it was a complete success. The Austrian front was broken through at several points. The German troops who came to help also found themselves in a grave situation - and moved away from Stokhod. This was one of the strongest crises on the Eastern Front. [12]. Russian 7-I army attacked Brzezana - Monasterzhisk. 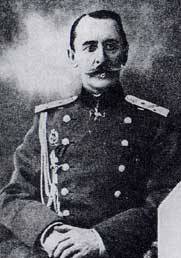 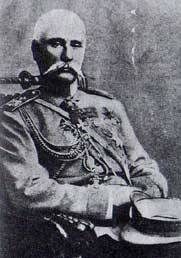 From June 26, delivering the main attack is already the task of the Southwestern Front: in the Kovel direction with the prospect of moving to Brest - Pruzhany. The third stage of the Offensive began. A. A. Brusilov received troops from the Strategic Reserve Reserve - the Guards Detachment and the 4 SibAK (from the Northern Front - also the 3 AK). The formed group of the cavalry general VM Bezobrav (Special Army) occupied the area between the 3 and 8 armies. The enemy was shot down from positions in the areas of Tristen and Selets, but failed to reach Kovel. Opponent, providing fierce resistance, pulled large reserves. 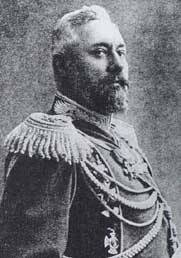 8 of the army should have captured Vladimir-Volynsky, 7 and 9 - Stanislavov-Galich frontier, and 11 - to attack Lviv and Brody.

Meanwhile, the German command, bringing up to the Offensive of the South-Western Front to the 20 divisions (from other sectors of the Russian Front, from France and Macedonia), began to form a strike group in the Kovel region. Embarked on the transfer of troops sent to the Italian front, and the Austrians.

Active actions took place on the theater and in July. The 7 Army in late July dealt a heavy blow to the South German Army near Zbarazh. July 30, the Special and 3 armies operating on the Kovel direction were transferred to the Western Front.

On August 18, the armies of the front launched a new offensive: the 8 in the direction of Vladimir-Volynsky, the 11 in the Brzezany, the 7 in supported the neighbors, and the 9 in the offensive on Galich and Marmarosh Sighet. With large losses, the August operation did not bring the desired results. But the 9-I army overcame the Wooded Carpathians, and the 7-I army defeated the South German army on p. Golden Linden and Rotten Linden. Russian troops liberated the cities of Galich, Brody and Stanislav.

In August, battles were fought with varying success on the r. Stokhod. M. Hoffman recorded in the diary the fact of heavy fighting and the concern of the German command, trying to "scrape together" the reserves in an environment of constantly changing situation. [13]. A. A. Brusilov, who considered the Kovel line to be more important and responded to the strategic goals of the entire campaign (by the combined efforts of the South-Western (8 Army) and Western (3 Army) fronts crushed significant enemy forces in a strategically important area) Lutsk. 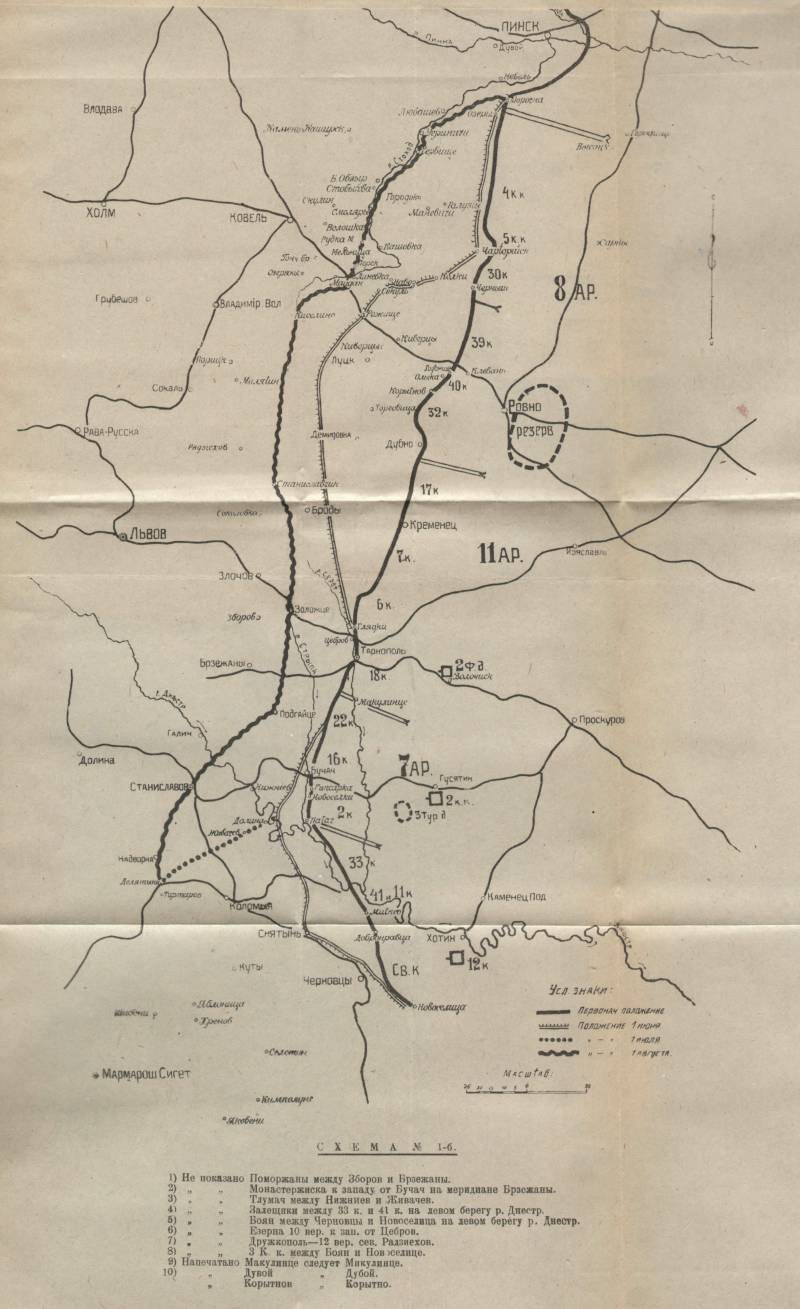 In September-October, combat activity on the north and south fronts of the theater began to fade, and the front stabilized along the r. Stokhod - Zolochev - Galich - Stanislavov - Vorokhta. Despite the fact that the Stavka shifted the brunt of the main strike to the South-West lane, the moment was missed and protracted bloody battles began.

The offensive was the largest achievement of Russian military art - opening a new form of positional breakthrough, the most successful for its time, indicated a way out of the positional impasse. The direction of the main attack - on Lutsk - led to the most painful consequences for Austro-Hungarians. It led to a major defeat of the Austro-German troops in Galicia and Bukovina, and the defeat of the Austrian 4 and 7 armies forced the enemy command to suspend the attack in Trentino and affected the situation near Verdun [14].

The offensive on a huge front from Lutsk to the Dniester almost led to the collapse of the Austro-German front and saved the Italians from imminent catastrophe [15].

Galician theater was central during the campaign. It was milled main mass of the compounds of the Austro-Hungarian army, pulled German reserves. The offensive of the South-Western Front marked the final transition of the strategic initiative to the Entente countries.

After Romania’s not very successful entry into the war, Russia had to bail out a new ally. Already during the 1916 Offensive. The 9 Army served the interests of the new operational direction. Romania urgently needed the support of Russian troops - by mid-November the position of the Romanian army was disastrous.

E. von Ludendorff, speaking of the victories of the Germanic weapons during this period, he noted that victory in Romania became possible only due to the absence of Russian troops [16]. This led to the formation of a new theater. Initially, the left flank of the South-Western Front was extended - along the Romanian-Transylvanian border. Replacing the Romanian troops in this area by the Russians allowed the ally’s command to free up additional forces [17]. But the Romanian government also asked for direct assistance from the troops - in particular, to send several corps for the defense of Bucharest [18]. Help was provided.

Russian formations (originally - F. A. Keller's equestrian group and the 47 th army corps, and then the 4 th and 4 th Siberian army corps and several divisions), restraining the pressure of troops A. von Mackensen, covered the withdrawal of the Romanian troops. The Russian 4 Army (3 Army and Cavalry Corps) appeared - an opponent of the German 9 (first 7 infantry divisions), Danube and Austrian 1 (8 infantry and 3 cavalry divisions) The enemy pumped the theater of troops with troops - for example, the German 9 Army was reinforced by the 3 infantry and cavalry divisions. 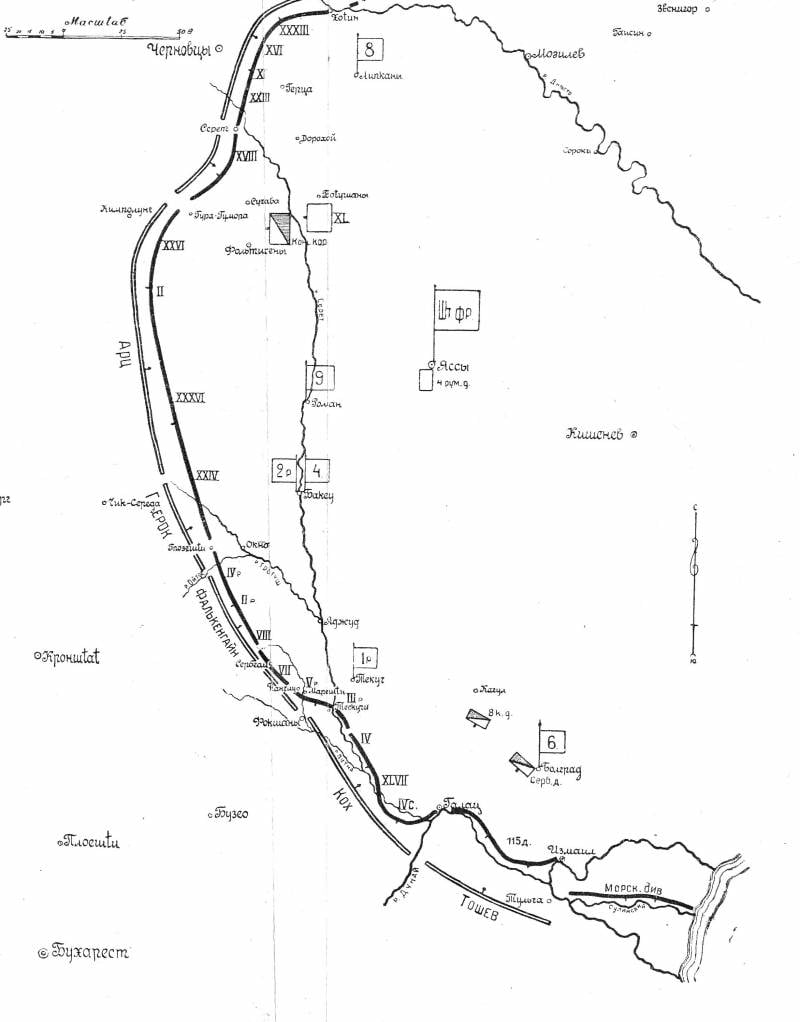 7 schema. Romanian theater of operations by January 1917 - the strength of the Russian army in the field. Strategic essay. Romanian front. M., 1922

The Russian troops in the new theater were reanimated by the Romanian front, rescued the Allied army, and even though the new theater was holding off a quarter of the Russian army, he pulled back the considerable forces of all 4 powers of the German bloc. 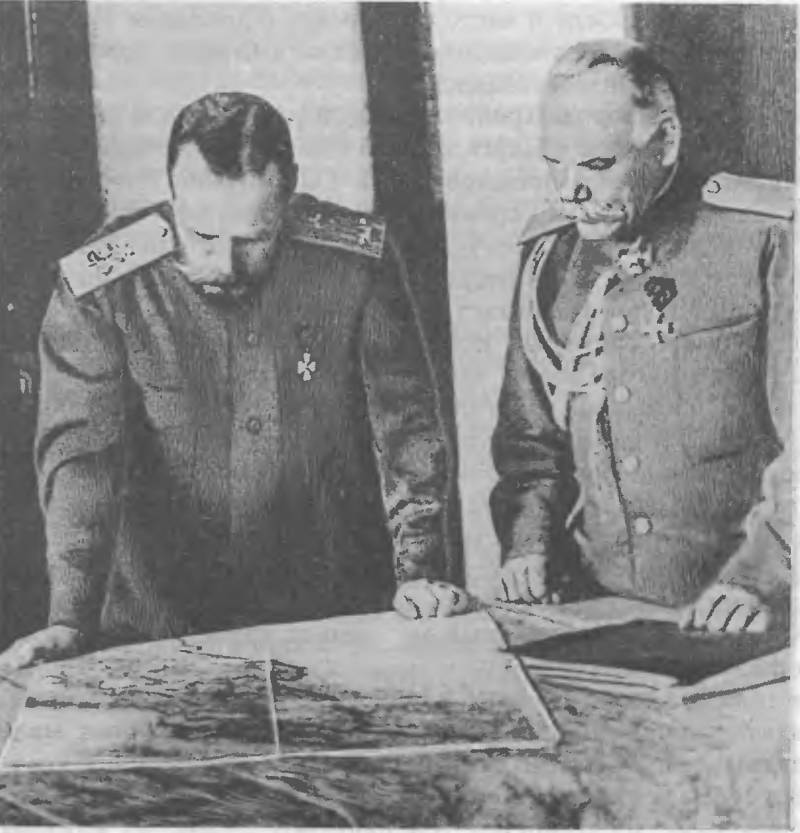 Strategic leadership of the Russian army in the 1916 campaign: Supreme Commander, Emperor Nicholas II and Chief of Staff of the Headquarters Adjutant-General M. V. Alekseev.