November 3 2017
41
October 27 Parliament of Catalonia approved the results of the October 1 referendum and proclaimed the independence of the Catalan Republic. Spain’s Prime Minister Mariano Rahoy immediately introduced 155 to the Spanish Constitution article and removed the Catalan General’s President Carles Puçdemon and all of his government from power, and dissolved the separatist parliament. Catalan independence lasted as long as two days, and Puchdemon fled to Brussels, calling from there "for democratic resistance." Catalonia was transferred under the external control of Spain in the person of Deputy Prime Minister de Santamaría. 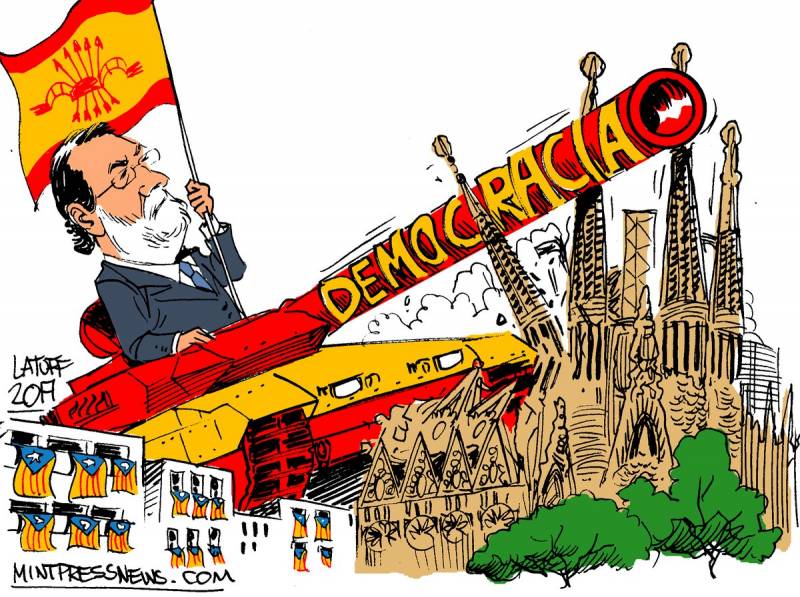 What was all this about? Barcelona peacefully proclaimed independence, confirming it with demonstrations of its supporters, Madrid peacefully suppressed it, taking its demonstrators to the streets. In general, it resembles the works of artists-actionists, only of epic proportions, it is a kind of political actionism. Raise the flag of the Catalan Republic, and wait for when and how it will break the Spanish police - that's all independence. A fair-day exhibitionist Pavlensky for nothing in Paris burnt the door to the bank, if only in Barcelona. For such a performance, he would probably have become a hero there, though, despite whose door he set on fire.

Why was the proclamation of independence of Catalonia, if no one was going to seriously defend? Did the X-NUMX days of bucket talk to Raho to initiate a dialogue in order to pretend to be a victim? Or simply democracy in Europe has collapsed so much that it has become part of postmodern art. Yes, there were broken heads during the referendum, but not more than in other accidents or on the football lists of the fans. Contemporary art permits self-harm in acceptable sizes, to take at least an actionist Pavlensky ...

All this was to be expected. There were no visible prospects for supporting the independence of Catalonia from the outside, and, most importantly, there was no evidence that the Catalans themselves would defend it. Europe is against, America is against, and tourists were also against. All supported Mariano Rajoy, only urged not to beat Carles Pucdemon much. To demonstrate “the force of law, not the law of force,” as Donald Tusk, President of the European Parliament, said.

Official Madrid did not use force in Barcelona to Puigdemona and his associates. However, it is still not clear whether they have committed a crime, or not? To arrest them or not? Will this great political spectacle be held on a peaceful path?

Observers believe that Washington's harsh statements in support of Madrid pushed him to use force against the Catalan separatists. On the Yugoslavian way. Given the US commitment to a policy of double standards, that is, a big lie, this can not be ruled out. President Trump warmly welcomed Brexit, he remains silent about Catalonia. In the expert community, the US has long been talking about the non-viability of the European Union, and here Catalonia seems to confirm their conclusions.

Generally, in Catalonia for the first time in stories political propaganda attempt to achieve independence! While the nations shed for this river of blood. The closest and European analogy is the separation of Yugoslavia, which Europe supported, lied about democracy and immediately recognized the new Yugoslav republics in the blood of the country's collapse.

In Catalonia, the Yugoslav lie of Europe has been uncovered. The European Union is directly responsible for the two-day “independence of Catalonia” - this is the result of Brussels’s political-actionist strategy of blurring the borders in Europe and building European identity, diminishing the role of states and reducing them to the regions. Barcelona seemed to believe in this policy, and now the casal of Catalonia is destroying the entire building of the Brussels democracy: Madrid will hold extraordinary elections in Catalonia on December 21, and the Catalan pro-independence parties can again win them and everything will happen again?

Our experts, discussing Catalonia, roll into vulgar Marxism with its “economic man”, who care only for his animal needs, which in many ways destroyed the USSR. They argue: the Catalans do not have serious economic reasons for discontent, and independence, obviously, will worsen their economic situation. So again the old argument with biblical analytics comes up: "Man does not live by bread alone!"

What are the rights of modern man: the bread is one, or does he have only one bread? The answer to this question can give Catalonia. By the way, Europe in the Catalan question showed that it is inferior in democracy to the late USSR, which was the only peacefully letting its Union republics into independent sailing.

Since the European Union is trying to launch Russia along the Yugoslav way with its “Euro-Associations”, the incident of Catalonia in Russia is, of course, beneficial, and it should be played out as a kind of retaliation. Russia cannot play it politically today, but it can provide moral support to the fighters for the independence of Catalonia with its media. Because Catalonia revealed European fake democracy, as Trump revealed the American fake media and their "democracy." Because Spanish phantoms patrol the sky on our borders in the Baltic States.

Thanks to the Catalan precedent, it becomes obvious to all that Western democratic values ​​are a myth, beads and mirrors for the new Indians, a lie for export for independent peoples. Catalonia has shown that police batons and Brussels-based demagogues are central to European democracy. The Spanish-Catalan party is still far from completion, the Pandora’s box is just open ...

Ctrl Enter
Noticed oshЫbku Highlight text and press. Ctrl + Enter
We are
Complete Catalan PuchedonCatalonia: the beginning of the "parade of sovereignties" or a fight of elites for privileges?
Military Reviewin Yandex News
Military Reviewin Google News
41 comment
Information
Dear reader, to leave comments on the publication, you must to register.