More than 2,2 thousand units of military equipment will arrive in the Southern Military District at the end of the year.

November 2 2017
18
More than 2,2 thousand units of military and special equipment for various types and types of troops will go to the army units of the Southern Military District until the end of the year. This was announced at a meeting on Thursday by the district commander, Colonel-General Alexander Dvornikov. 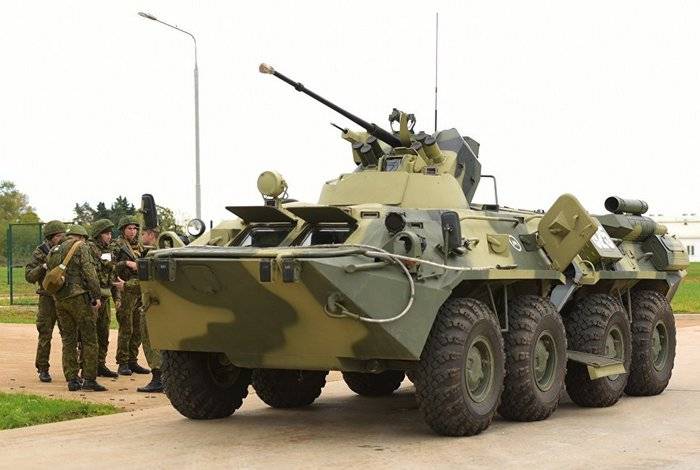 By the end of this year, the troops of the Southern Military District should receive more than 2,2 thousand units of military equipment, including about 120 tanks T-72, more than 110 BMP-3 infantry fighting vehicles, about 30 BTR-82AM armored personnel carriers
- his district press service quotes him.

In addition, around the 20 Tornado-S multiple rocket launcher systems, one set of Bal and Bastion coastal missile systems and the Pantsir-S self-propelled anti-aircraft missile and gun complex will be delivered.

Janitor clarified that currently more than one thousand units of modern weapons and the latest models of military and special equipment for various types and types of troops have been delivered to the units of the district. Among them - about 300 units of armored vehicles, 250 vehicles, more than 30 units of equipment of radiochimbi protection, about 100 units of communication equipment. The naval component of the district was replenished with four ships and two auxiliary vessels, reports TASS
Ctrl Enter
Noticed oshЫbku Highlight text and press. Ctrl + Enter
We are
General with Syrian experience. The head of the military operation in Syria was appointed commander of the Southern Military DistrictInnovation Day of the Southern Military District: BTR-82AM armored personnel carrier
18 comments
Information
Dear reader, to leave comments on the publication, you must to register.