Test drive BMP-3: "Popmeh" at the helm of the famous car

November 5 2017
39
The model can hardly be called a novelty: it was put on production by Kurganmashzavod as early as 1987, and more than once successfully participated in international tenders. For the test drive, they provided us with the BMP-3 - a particularly famous car: it took part in parades and demonstrations in front of specialists and the public. 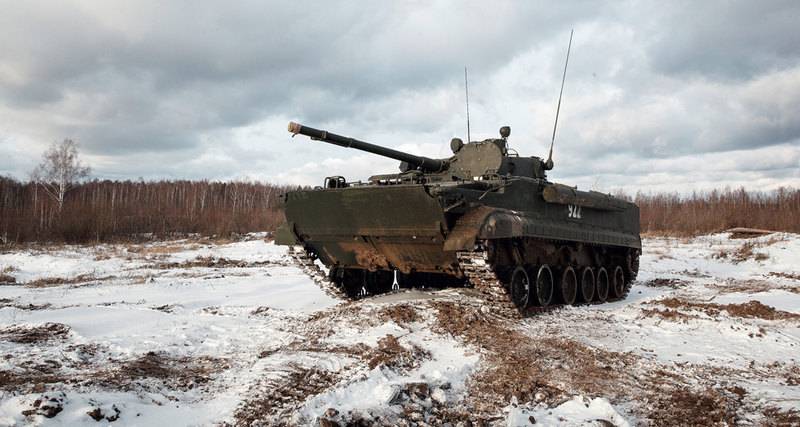 Despite many years of success in the market, the car remains unique in its class: starting from the previous BMP-2 hit, the developers radically changed the layout. V-shaped 10-cylinder engine placed on tank manners, over the rear axle. This allowed for better balancing and visibility for the driver and provide additional protection for the landing.

In the immediate vicinity, the BMP looks taller and more massive due to the defiantly upturned nose and high ground clearance, visually balanced by the sidelines extending towards the back. The low-profile tower above the roof creates a feeling of power. Capable of turning all 360 degrees, it carries an 100-mm cannon, an 30-mm automatic cannon and an 7,62-mm machine gun coupled to them tightly, and two triguns grenade launchers of the “Tucha” smoke curtain system, which are rigidly connected in a single mask. 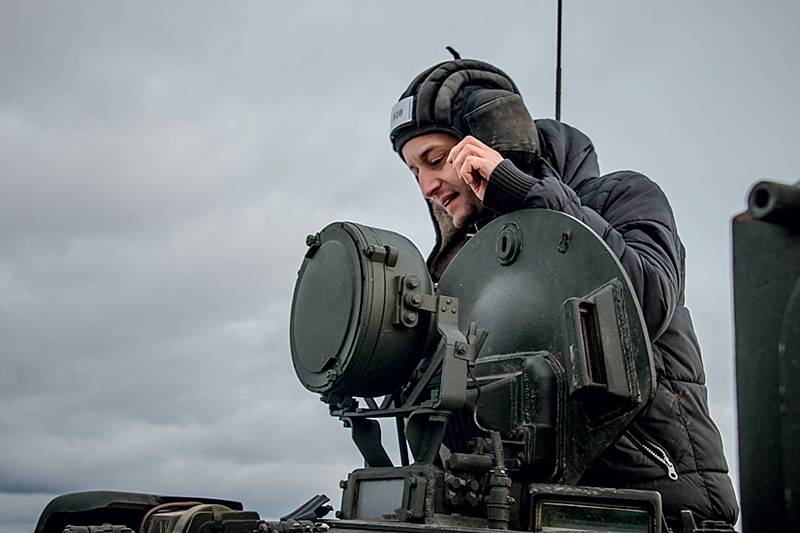 BMP-3 is in service with Russia, the United Arab Emirates, Kuwait, Saudi Arabia, South Korea and other countries. For those who value special comfort in the performance of their tasks, the following versions are supplied: commander (BMP-3K), repair and evacuation (BREM-L "Beglyanka"), reconnaissance (BRM-3K "Rys") and others.

None of the machines of this class can boast such armament: a 100-mm cannon that is stabilized in two planes can also contend with the armor of a serious tank. “And we can cover the space with a length of 100 m with a curtain,” adds BMP-3 mechanic-driver, deputy commander of a motorized rifle guard company, senior lieutenant Peter Galaburda, “in fact, a whole platoon of three cars.” The front side of the tower reinforced invoice armor, which, however, does not spoil the contours of the upper part of the body. 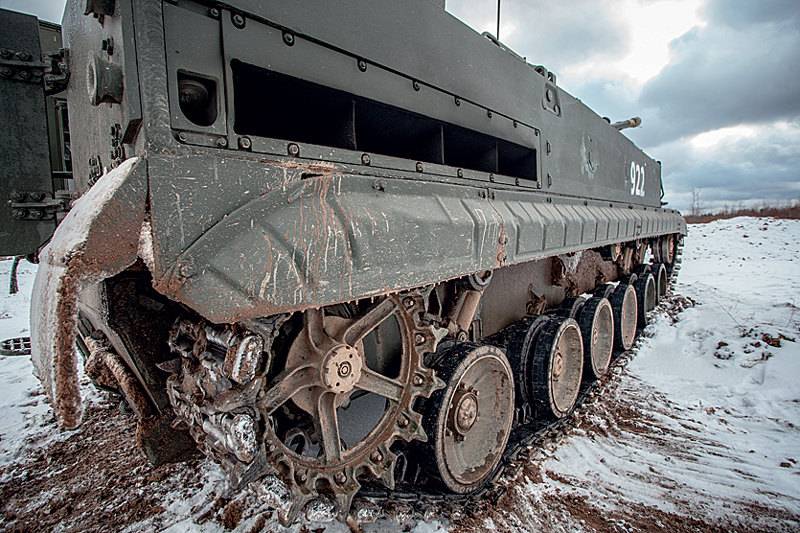 About aerodynamics developers cared last: 500 hp "Under the hood" and without that allow the 19-ton car to develop about 90 km / h on the highway and to 10 km / h afloat. The engine can run on both gasoline and kerosene, although diesel fuel is regularly used. It does not shine with economy and consumes about 100 L on 100 km of run, however the 600-liter tank is enough to go to work, to the country and return back without refueling. 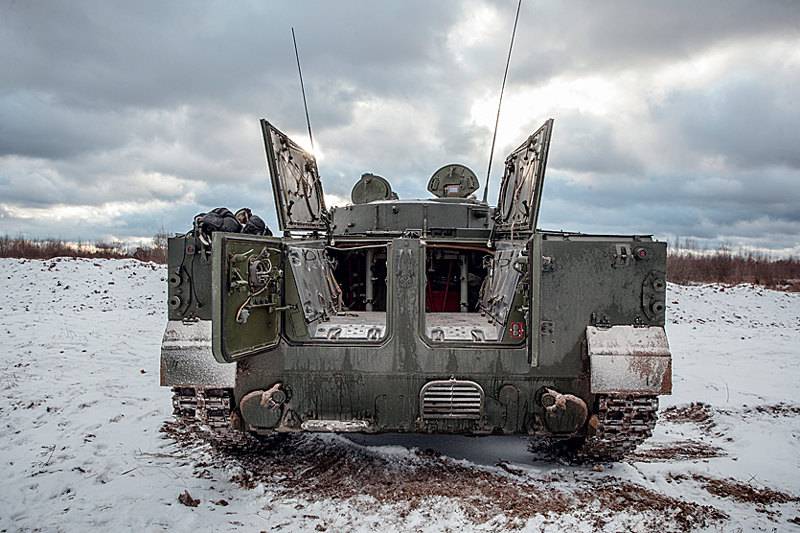 “In order even to operate a tank at a basic level, one must learn for a long time,” Peter Galaburda does not hide his pride. “But believe me, you will master the BMP-3 in a couple of minutes.” In fact, the semi-automatic hydromechanical transmission (four front and two rear speeds) allows you not to be distracted by the gear shift and concentrate on driving with the help of a motorcycle-type steering wheel. On it, by the way, there is also a button that allows you to instantly go to a maneuverable turn on the spot.

The first thing that attracts attention is the fantastic acceleration of the car. We did not manage to get data about the acceleration from the spot, but the sensations are hardly deceiving here: one push of the pedal - and the whole armored mass pulls away like a beast ready for throwing. “It was the case, we were competing on the level ground, at the sprint distance, - our BMP-3 against the T-72 and the BTR,” recalls the senior lieutenant. - We came first, broke away into several buildings. In fact, the BTR engine is not so agile, and although the conveyor can gain great speed, it does not start as quickly as the BMP-3. 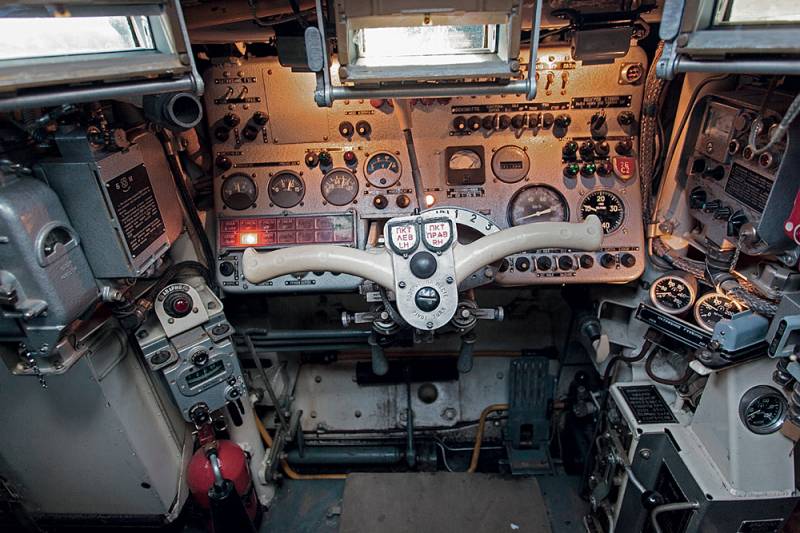 The fuel tank moved under the front "hood", but safety did not have to be sacrificed: the secret porous material that fills the tank from the inside eliminates the detonation of fuel, even with a direct hit. “In the instructions, he appears simply as a“ compactor, ”says Senior Lieutenant Peter Galaburd. - To the touch something similar to polyfoam ".

The tracked vehicle’s passability is beyond praise. According to the specification, the BMP is able to overcome a ditch to a depth of 2,2 m and a rise to 30 degrees, taking walls of almost a meter height. “The tension of the tracks is controlled separately, and, if necessary, the driver can tighten them without getting out,” says Peter Galaburda. “The indications of many sensors, from engine temperature to oil level, are reduced to a single“ Accident ”light bulb: it will prompt you immediately if something happens, you can stop and look.”

Interior decoration is not different premium, and the passengers should not wait for silence. The automatic loader, located in the center part rotating together with the tower, works with a special crash. If necessary, shooting from the main 100-millimeter cannon can be fought with laser-guided anti-tank missiles, but it will have to be manually charged. 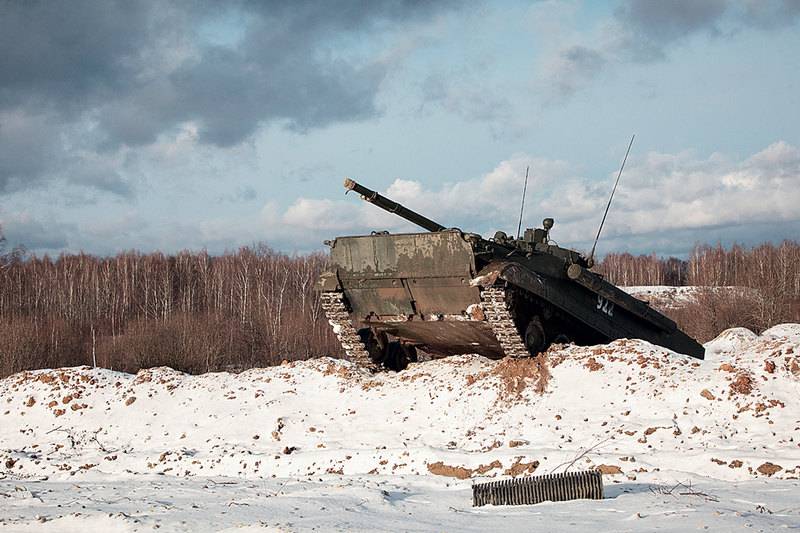 Regular place of the driver is located in the front, on the sides of it - the place of machine gunners who can fire from two course machine guns. The turret has the operator’s gunner’s and the crew’s commander’s seats, and another five people are in the rear of the cabin. The review of passengers is severely limited, which during movement and wild shaking creates noticeable inconveniences and requires the habit of dizziness. In the cold you can use the stove, and export versions supplied to Arab countries are equipped with air conditioning. However, the promising Kurganets-25 tracked platform, which the Kurganmashzavod developers presented not so long ago, should become much more comfortable. “This is the car of tomorrow,” says Peter Galaburda, who happened to drive the Kurgan at the Victory Parade. “Everything is digital, a bunch of touch screens, and comfort is at a new level.” It remains to wait for a new test drive.

Ctrl Enter
Noticed a mistake Highlight text and press. Ctrl + Enter
We are
Test drive BMP-3: "Popmeh" at the helm of the famous carIron fist of the Red Army. Motorized and tank divisions
39 comments
Information
Dear reader, to leave comments on the publication, you must to register.