For the first time: unknown variants of the flamethrower "Sunpinek" based on T-80 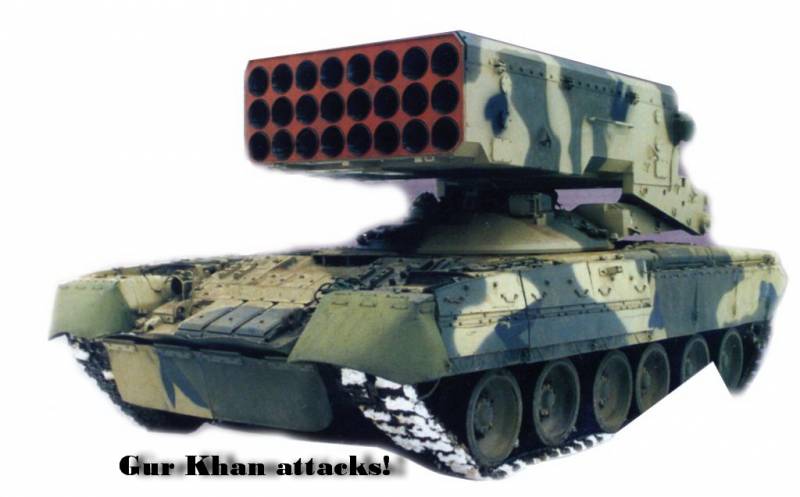 "Sunshine". The name of this, somewhat exotic, weapons now almost everyone knows. The heavy flamethrower system TOC-1A is rightfully considered to be one of the most deadly weapons of the army of the Russian Federation, lit up in Iraq and Syria, it is bought by Azerbaijan, Kazakhstan and Algeria. But very few people know that the "Solntsep", adopted to supply the troops of RCBZ by the order of the Minister of Defense No. XXUMX of 445, could have been completely different!

From the very beginning, the creation of TOC was shrouded in a dense veil of secrecy. For a long time, only vague rumors circulated about the work begun back in the mid-1970s. Until now, due to the lack of open access to documents, it is not known for certain why, having passed state tests and recommended for adoption in 1980, the system remained in prototypes for about 20 years. At the same time, in 1988-89, two TOS-1 combat vehicles, called very “fun” - “Pinocchio” - using the OCD encrypted index, took part in the hostilities in Afghanistan, although they were still prototypes. The second appearance on the stage of “Pinocchio” was made 10 years later - in 1999-2000. Then President Putin ordered the "wet" of Chechen terrorists "in the toilet." The army took to the visor and to the aid of tankers with artillerymen, called on “chemists - arsonists” - flamethrower units of the radiation, chemical and biological defense forces. In 2000, during the storming of the village of Komsomolskoye, the TOS appeared in all their fire-breathing beauty before the cameras of the journalists. Hiding the presence of such a technique no longer made sense. TOS-1 was declassified and began to be shown at exhibitions (in fairness, we note that the first publication on TOS was in the Military Parade magazine for March-April 1998). At the same time, its modernization began. In fact, by the year 2000, it was out of date. The TOC included the MLRS combat vehicle on the chassis tank T-72A, Transport-loading machine on the chassis of the KRAZ-255B car and a special uncontrolled rocket of volume-detonating action. 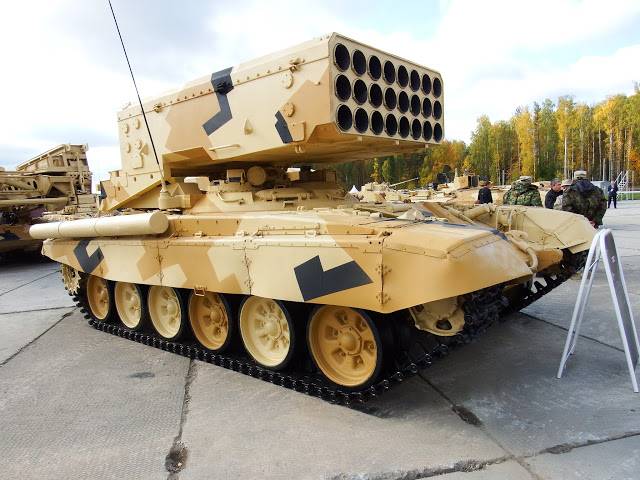 In turn, the combat vehicle was a converted outdated tank without a turret, instead of which the launcher was installed as a turntable with outboard brackets, on which a transport-launch container with 30 th guiding launch tubes for NURS was fixed through the axles of the trunnions and support brackets. Targeting the launcher on the target in the horizontal and vertical planes is produced by power tracking drives from the SLA, consisting of a sight, a laser rangefinder, a ballistic computer and a roll sensor. However, as shortcomings of the machine, the military noted the lack of automation of data entry in the MSA launcher - the input was mostly manual; insufficient reliability of the drives (in the control system of the turntable stopper there is no safety net for leakage of working fluid from the rod end of the brake hydraulic cylinder, there is no reliable locking of the platform relative to the chassis); the irrational use of the reserved space of instruments and actuators, including the horizontal guidance drive and turntable hydraulic supports, was noted; as well as low efficiency during launches.

Another major drawback was considered to be not sufficiently high system efficiency when using projectiles of other types, since the MLRS Combat vehicle was developed to use shells of a specific type and purpose, and when using other, especially heavier ones, the accuracy of hitting the target sharply decreased. Identified during trial operation, the shortcomings needed to be urgently corrected. In addition to improving the combat vehicle, the tasks were set to create more efficient projectiles, as well as to create a new transport-loading vehicle. KrAZ production remained in Ukraine, and in order to unify and ensure the same mobility, the military wanted to get a TZM on the same tank chassis as the combat vehicle. It was planned that for each BM two TZMki would be attached. The functions of the head developer for the modernization of TOC, remained at the Design Bureau of Transport Engineering, Omsk. And here, the most interesting began ...

Wanting to keep the work on the T-80U tank, the production of which had ceased by that time, the Omsk designers somehow managed to break through the use of the chassis of this particular gas turbine tank in the technical specifications for TOS modernization. And this is despite the fact that in the leadership of the Ministry of Defense, the "eighty dozens" began to look askance already from the time of the First Chechen Company - it is no secret to anyone that for the second time T-80 was simply not allowed into Chechnya.

Another interesting innovation was the requirement to equip the BMTOC with defensive armament as part of the 30mm automatic cannon and course machine gun, caliber 7,62mm. The main weapon still had to remain thermobaric NURS caliber 220mm. For him, it was planned to increase the mass of equipment with explosives by almost a quarter - from 73 to 90 kg, while simultaneously increasing the firing range from 2,7-3 to 5-7km.

However, the number of launchers was reduced from 30 to 24. For what reasons - still everyone is guessing. They also called a decrease in mass-dimensional characteristics, an increase in survivability (?), The elimination of the large dispersion that allegedly took place in salvo firing. For certain - is still unknown. The system that was upgraded in this way was to receive the TOC-1M index. 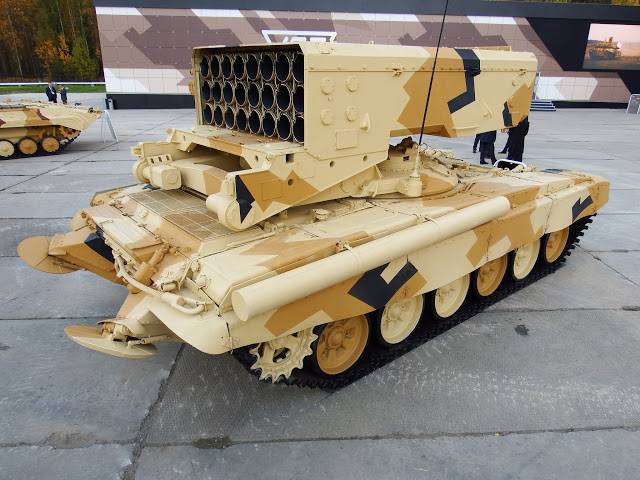 In the course of the work, first of all I had to abandon the plans to install defensive weapons. From a machine gun course, located on a fender (but because there is nowhere else) little sense. There was no place to install an automatic gun — wherever you plug — it prevents the transport and launch container for NURS — it was impossible to provide even the slightest acceptable shelling angles.

To drive the turntable, instead of a hydraulic motor, a standard electric drive of the base tank was used, various sensors were added to the MSA, and the degree of automation was increased. 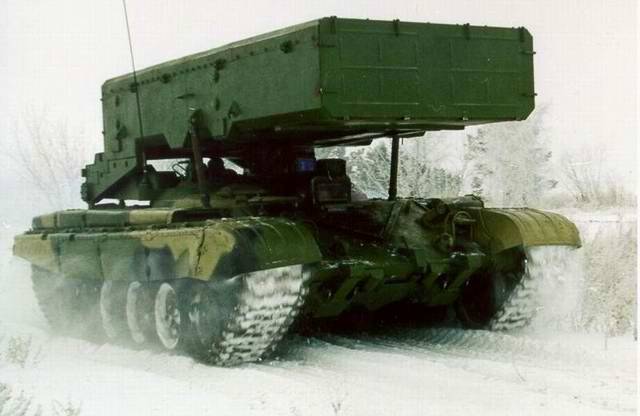 Developed several variants of the transport-launch container, with the possibility of using projectiles with a variable warhead, having solved the problem of shifting the center of mass of the combat vehicle and increasing the inertial moments, manifested during movement due to the loading of high-mass NURSs. The center of mass of the TLC was moved forward beyond the center of mass of the tank chassis and is located on the condition of ensuring smooth running of the BM MLRS, inherent to the base tank, subject to loading with the heaviest projectiles. In theory, it sounds nice, but in practice it didn’t work out quite well.

Frankly speaking, the T-80U chassis did not pull this load - the front rollers and shock absorbers were overloaded. The ideal solution would be to extend the chassis by one roller. Everyone remembers the tank "Black Eagle"? That same multipurpose armored tracked chassis was also offered for TOC. In general, KBTM has developed and patented a whole range of different GMMs on it. In principle, such a modernization of the chassis could take place, in the case of continuing work on the subject of GTE. 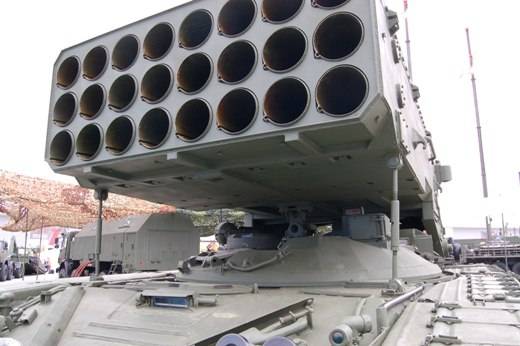 At the beginning of 2000-x, after bankruptcy and looting of Omsktransmash, it became clear that the release of T-80U could not be resumed there. But the modernization of the T-80B and BV - it was a very real way if the Defense Ministry was interested in tanks with GTE. And I must say that such an interest in principle was - among the military there were many supporters of gas turbine tanks, trite, they had no money. The Ministry of Defense in the person of the GABTU, as it could, supported the design bureau with orders for various OCDs, but there was no more money ... Who knows if Armatu, T-90М, T-90Б72 would have had India’s order for T-3С , or would Russia forever be deleted from the list of tank-producing powers?

One way or another, but to continue working on heavier and longer shells, the WPK had to be installed on the usual T-72A chassis. The choice, oddly enough, was predetermined by its “oakness” - its suspension was more rigid and withstand more significant loads. However, the real shooting, and, most importantly, riding, put an end to the longer and heavier NURSah. The results were unsatisfactory and precisely because of the lack of a suitable chassis. Lengthen the projectile without any
consequences for the carrier was possible only on 40 cm, increasing its mass from 173 to 217 kg. That was enough to conduct firing at a distance of up to 6 km, but there was no significant increase in the NURS action.

In this version, the launcher was tested on the T-80U chassis. However, when firing, in spite of the special measures taken, including design measures, there was another drawback to the chassis with the CCD - the engine surging due to the ingress of gases from the launching rockets and the clouds of dust and dirt raised by them. Thus, the new launcher with 24 guides was prescribed on the “good old” T-72. It was in such a "Sunshine" under the designation TOC-XNUMHA and was accepted for supply by the army. 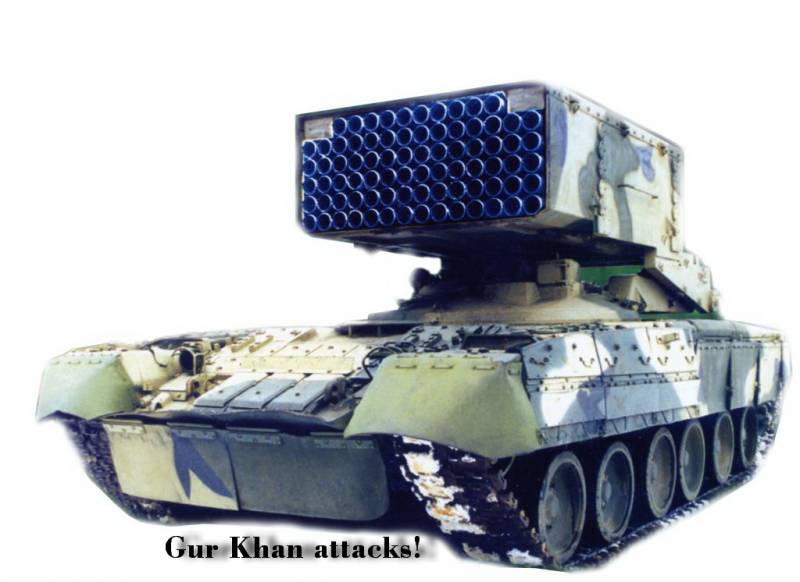 But there was another option. Target action tried to increase through the use of a large number of missiles, but a smaller caliber. For this, a 122mm caliber projectile was developed, made, of course, on the basis of the projectile of the legendary Grad. A corresponding launcher was also created, the TPC of which could immediately contain 80 of such NURSs. It was also installed on the T-80U chassis. Passed the test, but then they did not go further. Why? Again unknown.

In 2011, the TOC-1А was once again upgraded - the launcher remained unchanged, and the T-90С tank was used as a chassis. Such cars until now were exclusively for export. As an export platform for TZM, they returned to the wheeled chassis, this time on the KAMAZ-63501 chassis of the Mustang family. 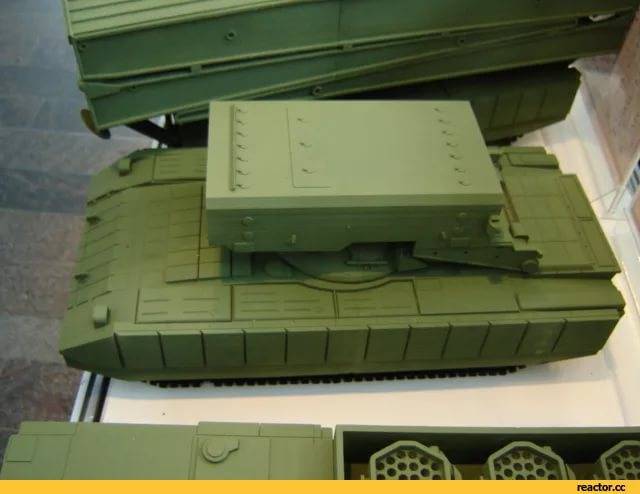 As for the Russian Army, the work on improving the heavy flame-thrower system continues. KBTM, now part of the NPK Uralvagonzavod JSC, proposes to use the new Armata heavy tracked platform. Its use will make it possible to return to the idea of ​​“long” missiles and, accordingly, longer TPK. The TOS heavy flamethrower fighting system without any problems BM-2 in the form of a layout and advertising brochure was demonstrated in a "closed" mode at the exhibition "Day of Innovations in the Defense Ministry of the Russian Federation" in 2013 year. 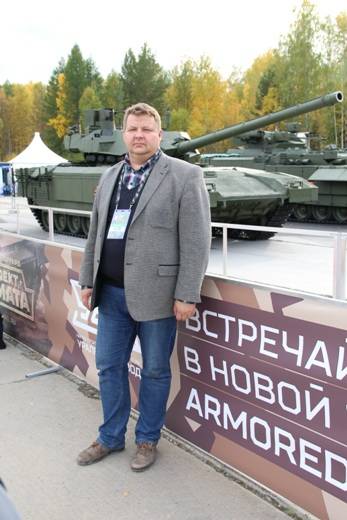