November 4 2017
20
Exactly 500 years ago, the Reformation began, splitting the Catholic Church and becoming one of the most important events in stories Of Europe. For the Reformation stretched a long series of bloody conflicts that radically changed the entire Western world. Russia located in the east had a chance to play its own role in this, and from a very unexpected side. 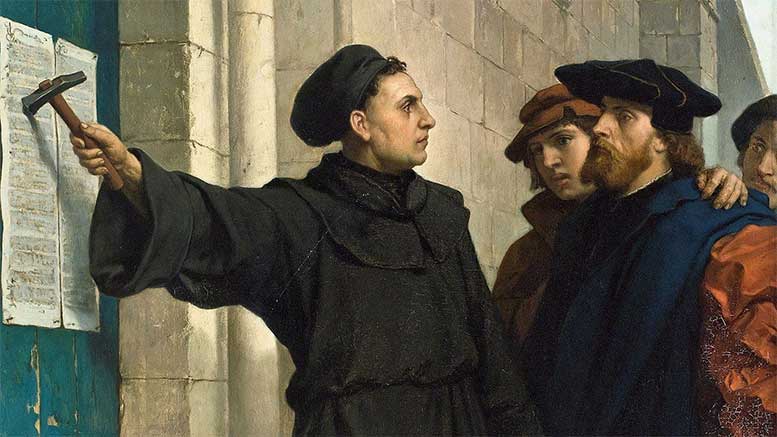 It is well known that the Reformation was started by the Augustinian monk Martin Luther with the spread of “95 theses”, which, according to legend, he nailed to the gate of the church in Wittenberg. The historical truth is somewhat more boring than this beautiful image — Luther sent his theses aimed at “cleansing” the Church (as the theologian himself understood it), to the Bishop of Brandenburg and the Archbishop of Mainz.

However, talking about the Reformation should not begin with Luther, who took his theological ideas not from the “ceiling”, but from 1379, when Oxford professor and theologian John Wyclif wrote essays that the absolute power and authority of the pope does not correspond to the spirit of the Gospel, and people should save their souls not with the help of the Church, but with the help of the Bible. That is why he translated the New Testament into English, and three years later reached the sacraments of the Church. In particular, speaking against the dogma of the transfiguration of the gifts, according to which the bread and wine during the sacrament are transformed into the body and blood of Jesus Christ.

Twenty years later these ideas and compositions inspired the Czech priest Jan Hus, who became the leader of the national liberation uprising. Despite the fact that, in the end, Gus was burnt as a heretic, his ideas proved to be very tenacious, and the Czech resentment of the pope eventually led to the nominally Catholic Czech Republic being the most atheistic country in Europe.

As for Luther’s “enlightenment”, the most important factor was that he was a member of the Augustinian order. It was Blessed Augustine who once laid the foundations of the “doctrine of predestination,” diminishing the factor of free will of man — as a result, this doctrine became one of the main ones in Protestantism. Paradoxically, the same Augustine laid the foundations of Catholicism, setting the prerequisites for the "filioque" - the dogma of the Trinity, which in 1054 divided the single Christian Church into Catholics and Orthodox.

But back to Luther. Another “point of no return” was the visit of a young preacher to Rome in 1511. Contemporaries claim that he "was shocked by the mores of the clergy reigning in Rome." But you need to understand who exactly then headed the Catholics. It was Pope Julius II - a person, frankly, an outstanding, fully devoted himself to politics and the centralization of power. It is to him that the Vatican owes its corps to the Swiss Guards, who in the times of Julius II were a full-fledged papal army. The pontiff did not hesitate to command this army personally, being directly present on the battlefields.

These worldly affairs did not in the best way affect the moral character of the clergy. In addition, the political intrigues and military campaigns of Julius II demanded money, and he earned money, bestowing everything with new tribute to "church peasants and the land," including in Luther's homeland.

In 1513, Julius II died, becoming the first father, whose body was embalmed. Leo X ascended the throne, he was Giovanni Medici - a pontiff, who had no holy dignity before being elected. It was an even more odious person than his warlike predecessor. In fact, Leo X behaved like a purely secular ruler with an irrepressible burden of entertainment. Balls, theaters, orgies and other “dear to the heart of the pontiff” joy took on such a scale that soon the treasury of Rome was completely devastated. According to some reports, the new pope spent twice as much in a year as the income of the Roman Church. The tribute in her favor was constantly growing, but the waste on the papal throne lacked that.

In October, 1517, Leo X, issued a bullet for the sale of indulgences in order to “assist in the construction of the church of Sts. Peter and the salvation of the souls of Christendom. " This world-famous cathedral was erected back in 1506, but the Pope, as already said, managed to squander all the resources. It’s hard not to see a kind of irony. In due time, Christ told the Apostle Peter: “And I’m saying a verb to you, Thou art the Peter, and on this stone I will build My church, and the gates of hell will not prevail against it.” In practice, it was precisely because of the construction of the main temple in honor of its “main” apostle that the Catholics underwent one of the largest schisms in their history.

Luther’s cup of patience was overwhelmed by the fact that the “excessive holiness” of Catholic saints, which accumulates in the Church, was declared the basis for a commercial approach to sins. For its part, the Church can “distribute” this “excessive holiness” to everyone who wishes so that they, for example, do not fall into purgatory. In parallel, Leo X approved the creation of Catholic banks, which, among other things, gave money to grow. In general, the degree of hypocrisy was so high that Luther could not remain silent.

Together with the indulgences, he “threw out” from dogmacy both the very understanding of Christian holiness, and the veneration of icons, and the church hierarchy, and the mystery of sacraments, leaving sola Scriptura - “only Scripture” and a fair share of anti-Semitism, but this is another story.

The Reformation led to the Thirty Years' War, to global upheavals in Europe, to cardinal changes in the Western world, as well as to the counter-reformation with its most severe persecutions against Protestants. And Russia played a rather interesting role in this.

The first Lutherans came to the Russian kingdom as German prisoners. Already in 1550, Ivan the Terrible turned to the Danish king to send him a book printer. The choice fell on Hans Bockbinder, who brought with him not only the Bible, but also books describing Lutheran theology. So the first Lutheran-Orthodox dialogue on religion was held. Another thing is that the Russian clergy did not appreciate the Lutheran dogma, and Maxim Grek wrote a treatise “Against Lutherans - a word about the worship of the Holy Icons” on this occasion.

He did not appreciate the teachings of the former Augustinian monk and the Patriarch of Constantinople Joasaph II, to whom the Lutheran delegation arrived in 1573. However, the hierarch of the Ecumenical Church evaded controversy, asking no longer to write him about the doctrine, but to write "about friendship."

Despite the rejection of Lutheranism by the Orthodox, Ivan the Terrible gave the go-ahead for the construction of the first Lutheran church in Russia, and by the end of the reign of Mikhail Romanov, there were already more than 1,000 Lutheran families in Moscow.

Many researchers note that under Ivan the Terrible, under Boris Godunov, and with the first Romanov Protestants, Russia lived better than in any other European country.

It is necessary to make a reservation that the Lutherans, on pain of death, were forbidden to missionaries among the Orthodox and to convert them to their faith. But the history of the Reformation and the Lutheran - this is including part of the history of Russia, so the present anniversary for our country is not quite a stranger.

The dialogue between the Lutherans of various denominations (such is the fate of the Protestant churches - to constantly break up into newer and newer trends) continues to this day. The Orthodox do not shy away from such discussions either. It is clear that between “Russians” and “Germans” (at one time these words were used in Russia as synonymous with Orthodox and Lutherans) there is a huge amount of canonical and dogmatic disagreements, but nothing prevents them from conducting a dialogue, for example, in the social or cultural sphere. And even hope for more.

“Usually, when Lutherans talk about attempts at interchurch dialogue with Orthodox churches, first of all they recall the words of Luther himself, said at the 1519 Leipzig dispute about the“ Greek Christians of the past millennium, who were not under the authority of the Roman high priest, ”the Lutheran and Lancer specialist told the newspaper LOOK History of Lutheranism Viktor Sukhotin. - The first attempts at contact with Orthodoxy were made during the life of Luther through the community of the Venetian Greeks, but were unsuccessful. In the 1559 year, a year before his death, the successor of Luther, Philip Melanchthon, passed through Orthodox deacon Dimitri to Wittenberg a letter to Patriarch of Constantinople Joasaph II “The Magnificent” to Wittenberg. There was no reaction from Constantinople, and the next contact between the churches took place only in 1573. Despite the failure of that correspondence, it was of great importance both for Lutheran and Orthodox dogma - and neither among the Orthodox, nor the Lutherans, leading the interchurch dialogue today, the position of the patriarch and the Tübingen theologians is not considered the final gap between the churches. ”

Ctrl Enter
Noticed oshЫbku Highlight text and press. Ctrl + Enter
We are
Chernobyl notebook. Part of 3Wars for Faith and the Peace of Westphalia: Lessons for Eurasia
Military Reviewin Yandex News
Military Reviewin Google News
20 comments
Information
Dear reader, to leave comments on the publication, you must to register.