November 4 2017
45
“Special rubber stick” or PR-Tonfa is the simplest, most effective and ancient device used by the police. Esquire tells how Russian PPS officers are related to Japanese samurai. 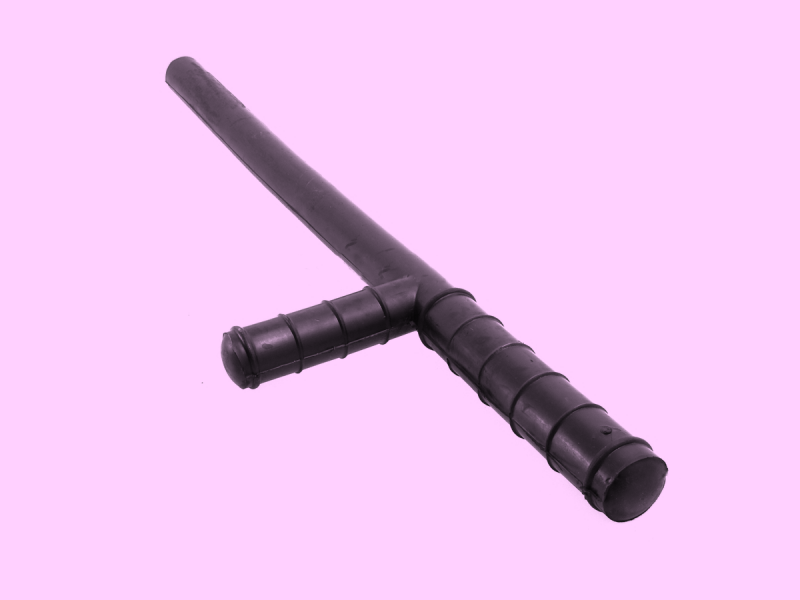 The tradition of banishing rebelliousness with the help of a baton appeared at the dawn of human society. There is nothing easier than to take and beat out an opponent with a stick or a bone of a lesser curtain: even chimpanzees own such techniques. Analogs of truncheons were invented repeatedly by carriers of different cultures and in very different eras. New Zealand Maori figured out the relationship with the help of jade measure, the ancient Russian princes from the chronicles and the epic warriors - with the help of clubs, Irish gentlemen with thick blackthorn reeds - with Shillai.

But the current type of baton was most strongly influenced by the Japanese, who from the Middle Ages had a whole set of batons for all occasions: bokken, kanabo, konaybo, neybo and jutte - weapon, known since the XVII century. For example, jutte looked like a short piece of armature with a handle and a rectangular hook and quickly helped pacify criminals without shedding blood, blocking sword blows (the sword often broke from a blade strike on a metal rod), and the hook hooked on the enemy’s clothes.

The pioneer of police self-defense, the son of Japanese émigrés Robert Koga, who was born in 1930 in San Francisco, already experienced adolescence in his teens. After the attack on Pearl Harbor, the American government feared a large-scale offensive on the west coast. On contrived reasons, such as preventing the transfer of data to enemy ships of Japanese immigrants in California, were detained and sent to concentration camps. 12-year-old Bob, along with his parents and 120, thousands of other Japanese went to an internment camp. The atmosphere in the barracks of the wilderness of the state of Utah was hostile compared to the serene settlements of East Bay: the teenager had to learn to stand up for himself. To fight off the local camp gangs, Koga began to master judo.

After the war, the family returned to a modest peaceful life and settled in Chicago, where Bob continued to practice judo in the high school gym. In 1949, he enlisted in the US Air Force and was seconded to a military base in Japan, then he fell on the Korean War and was wounded. He returned to the States of Koga in 1953 as an experienced and respected warrior, and in 1955 he began to serve in the Los Angeles police, later becoming one of the first Asian Americans as an officer.

The appearance of Bob Koga, charisma and the ability to disable any dangerous scoundrel without the use of weapons immediately opened the door to the department of morals. Soon the Californian samurai realized that his colleagues did not have the proper skills of self-defense - the three of them could not drag the big man into the car, do not disdain to use brass knuckles and just grab the Colts.

Gradually, he began to formulate ideas that would later become the basis of the new Koga-Koga-Jutsu system. Since 1961, Robert Koga began teaching self-defense at the Los Angeles Police Academy. Besides the fact that Koga adapted to real conditions the techniques of judo, jujutsu and free-style wrestling, he introduced a smooth wooden stick called the “Koga club” to the combat technique. A new baton, according to the idea of ​​Koga, was needed to equalize the strength and repel the attack (including knife blows). His technique of handling a baton included hitting and poking, blocks, knocking down techniques, and Koga taught mainly to beat his hands and feet, completely eliminating blows to the neck and head. This allowed the policeman to keep the enemy at a safe distance and arrest him without causing serious injuries. The new weapon gradually replaced the bits of the Billy Club, created back in the UK's 1829 year as part of the program of Robert Peel, the founder of the conservative party. In 1970, Koga's sensei founded a whole self-defense institute, and Koga-jutsu eventually became the basis for many modern police combat techniques.

True, Koga's club was soon replaced by a new one with a double handle. Its counterpart dangles on the belt of Russian faculty members. With all its appearance, the new stick resembles tonfa - the traditional wooden weapon of warriors from the island of Okinawa who practiced the martial art of Kobudo. As a result of the ban on carrying weapons, the islanders used any economic objects. For example, nunchucks are a tool for threshing rice. And in this t-shaped baton the silhouette of a lever from a millstone, which milled rice into flour, is guessed. The Okinawa peasants fought with two tonfs: one hand squeezed the side grip so that the stick lay along the elbow - a semblance of a shield was formed, which reflected even the blows of a sword, and the second hand could strike.

Maybe in 1971, police officer Lon Anderson from New Hampshire didn’t know about Okinawan weapons, or maybe he was secretly obsessed with him, but he officially named a piece of chair leg with a piece of crossbar, which he once used in a street fight, as a prototype of his invention while still a teenager. After three years of working with Paul Starrett of the local armory company Monadnock Corporation in 1974, he revealed to the world the first model Prosecutor PR-24 (protect & restrain - “protection and deterrence”, 24 - length in inches). A new baton was put into service in his native New Hampshire, then in Los Angeles, and then in other states. Thanks to Bruce Lee's films in America, the era of the craze for martial arts began, and the exotic club, from which it breathed the spirit of karate and kung-fu, quickly gained popularity.

Today, the police t-shaped baton almost completely supplanted counterparts in the police forces of all countries of the world, including the Ministry of Internal Affairs of Russia. With proper training, tonfa is much more effective than a stick stick. But the design and material for the manufacture of PR-24 has been changed countless times: the first plastic compound was deformed in the sun, so the material was improved; then new metal parts on the handle disappeared, then folding tonfa were invented, which with a sharp wave lengthened by almost two times. But the essence remained the same.

In most countries, the police mainly use polycarbonate batons, but in Russia they have not taken root - rubber is more commonly used here - for example, PR-Tonfa and PR-Taran, (except for Siberia and those areas where rubber because of frost may simply crack from impact). It turns out that the Russian batons are the softest in the world.