Modernization of tanks Leopard 2 of the Danish army


In 2000, Denmark acquired from the Federal Republic of Germany for its ground forces 54 tank Leopard-2 manufactured by Kraus-Maffei Wegmann (KMW) in A4 modification. By 2002, they were brought to the requirements of national standards at the enterprises of the Danish defense industry, and then in 2002-2005. upgraded to version A5 by KMW. Moreover, the main areas of work included:

• reinforcement of crew and tank passive protection;
• increase the survivability of the chassis and the power of the machine, in accordance with the increase in weight while strengthening the reservation;
• improving the ergonomics of the working environment of the combat compartment;
• introduction of modular design and an open system architecture and software to ensure subsequent upgrades. 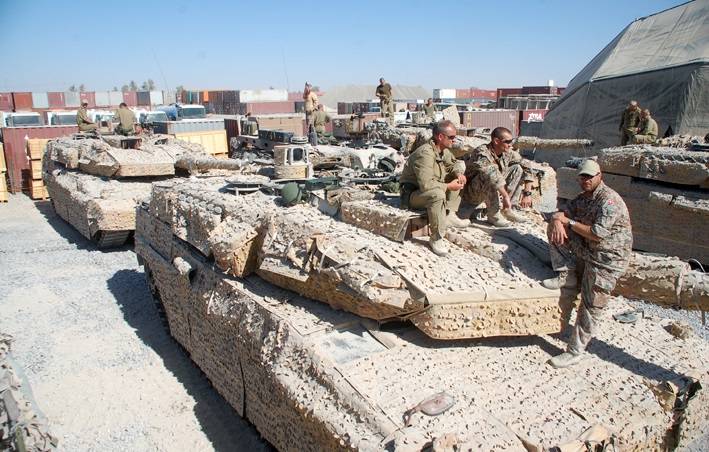 From November 2007, a platoon of Leopard-2 tanks of this particular modification operated as part of the Danish contingent in Afghanistan, where the first actual combat experience of using this type of tank was acquired, including the first cases of combat damage and losses. 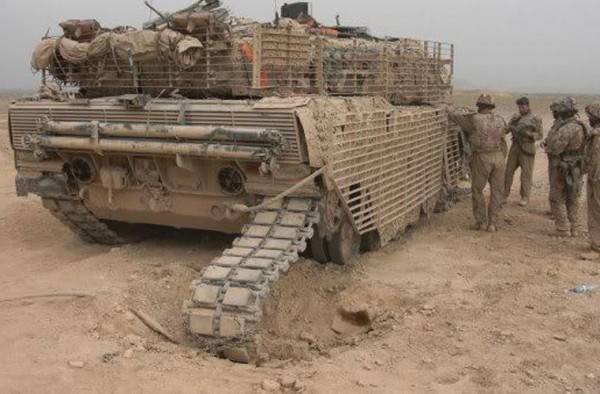 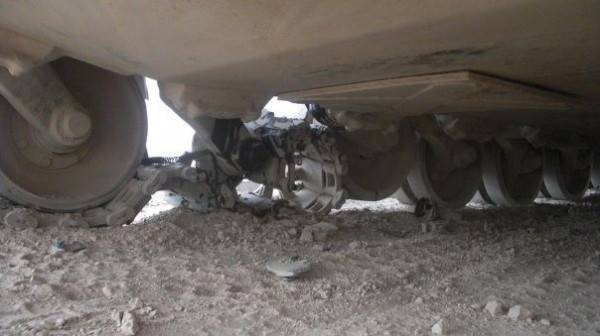 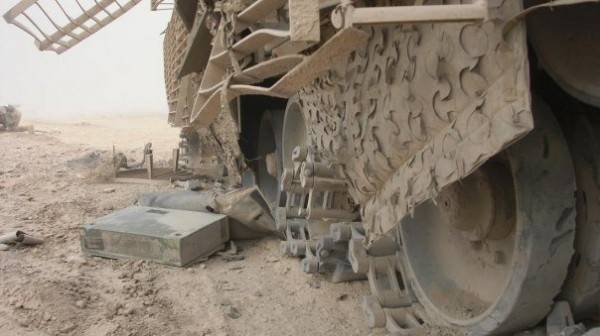 The first Leopard hit the 26 February February 2008, but the crew was not injured and managed to bring the car to the location of the unit, where it was later repaired. When a mine exploded another Danish tank 25 on July 2008, the driver Oberconstable Jasper Gilbert PEDERSEN died, but this Leopard was also restored. Subsequently, several MBTs suffered from IEDs, with the result that a total of five cars of this type were recognized as non-repairable. 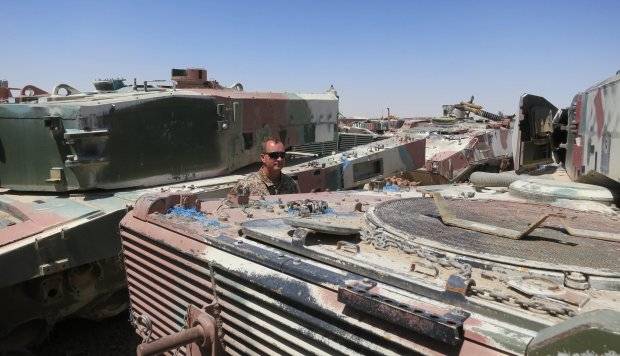 How they were taken to Denmark - separate and presentable история, but everything has been told there for a long time, and now we are interested in something else.

Based on the combat experience gained in Afghanistan, they identified a range of problematic issues that need to be resolved. Therefore, in the 2013, Denmark began to conduct a phased modernization of 405 units of the main ground combat equipment of the ground forces, including the 16 MBT Leopard-2.

At first, all major efforts were focused on the integration of modern tactical communications equipment (hærens taktiske kommunikationsnetværk - HTK). As part of this program, it was planned to carry out a full transition from analog to digital communications, navigation management of the automated battle management system (BMS) of the SitaWare Frontline type to 2015. 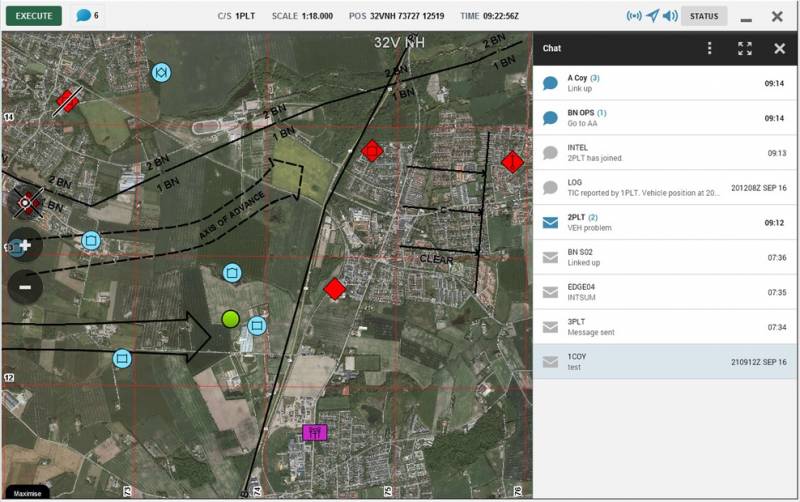 ASUB "SitaUea Frontline" is part of the software package (software), which meets the latest standards and is fully compatible with similar systems of the Allies in NATO and "Nordefko", which simplifies the installation and upgrading of software. The software package consists of two main applications:

• control system for onboard detection, communication and control facilities. ensuring their effective collaboration in a single information space.

Among the important user features of the CUBA City Frontline ASUB, its developers include:

1) High frequency update location of friendly forces.
2) Optimized tactical communications.
3) Radio support with and without Internet Protocol.
4) Optimized for displaying information on small-sized displays.
5) The small amount of processor memory required to install and run the software.
6) Easy to change settings when installed on various types of equipment.

In September, 2017 of the year completed debugging of the CUBA Front Line XUBS version of the 2.0 on the first three BMPs of the CV-90 1 th 1 mechanized company of the Life Guard battalion © SitaWare

But this topic goes very far aside, those who wish can see the details here, and we will return to our Leopards. For them, in addition to electronics, the upgrade package included several other major areas of work. The Fm MO of Denmark (Forsvarsministeriets Materiel- og Indkøbsstyrelse - FMI) Material and Technical Service worked on a prototype tank until the middle of 2015, then rolled it out for testing. 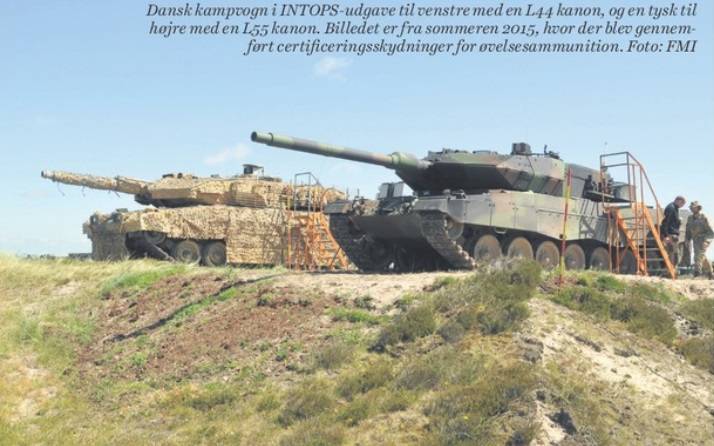 It was planned that the first Danish "Leopard-2А5" of the new modification would come to the armament of the NE of the country by the end of 2016, and all the 16 units of tanks planned for modernization will be ready within 18 months after signing the contract. The final cost of the works according to the calculations of the FMI specialists was several tens of millions of crowns, and the modernization of all 405 units of the military equipment of the North Denmark would cost the military budget of several hundreds of millions of crowns.

Meanwhile, the active movement in the world did not stop, giving specialists invaluable food for thought. An analysis of military operations in Ukraine and the Middle East confirmed that MBT is still one of the most important components of the ground forces, thanks to firepower and mobility with a fairly high degree of protection, and in the medium term, their role in armed conflicts will not diminish.

The experience of combat use of MBT of the type "Leopard-2" in military conflicts in Afghanistan and Syria by the armed forces of Denmark, Canada, Norway and Turkey, allows military experts to state that, despite all the identified shortcomings, this military equipment as a whole will meet its requirements even in for several decades. However, for this "Leopards" clearly need to be modernized. And while in Norway painfully reasoned and argued loudly whether the game was worth the candle, the Danes did not stop there.

Before the end of 2016, they decide on the need for a more extensive upgrade of 38 tanks, including 16, already equipped with new ASUB, and also 22 from the original version. In March, 2016, the FM service announced a tender for the production of the first prototype with funding for research and development in the amount of 68,6 million crowns (9,8 million dollars). In November, the government of the country allocated 2016 million kroons (598 million dollars) for these purposes to 85,5.

In the framework of the main program
on all 38 OBT "Leopard-2" will be installed:

1. new thermal sights for the commander and gunner;
2. high-performance climate control system in the tower;
3. an auxiliary diesel generator in the nadgusenichnaya shelf to provide electricity to the parking lot without starting the main engine;
4. side grating screens to protect against shaped projectiles;
5. air conditioning system in the department of management;
6. reinforced suspension for increased machine weight;
7. additional mine protection hull;
8. camouflage kit for frontal projection of the body;
9. front-view thermal imaging camera for the driver;
10. the upgraded 120-mm gun L44 and the new gun L55A1 - for 16 machines of special configuration (see below);
11. tactical communication system equipment and automatic control system. 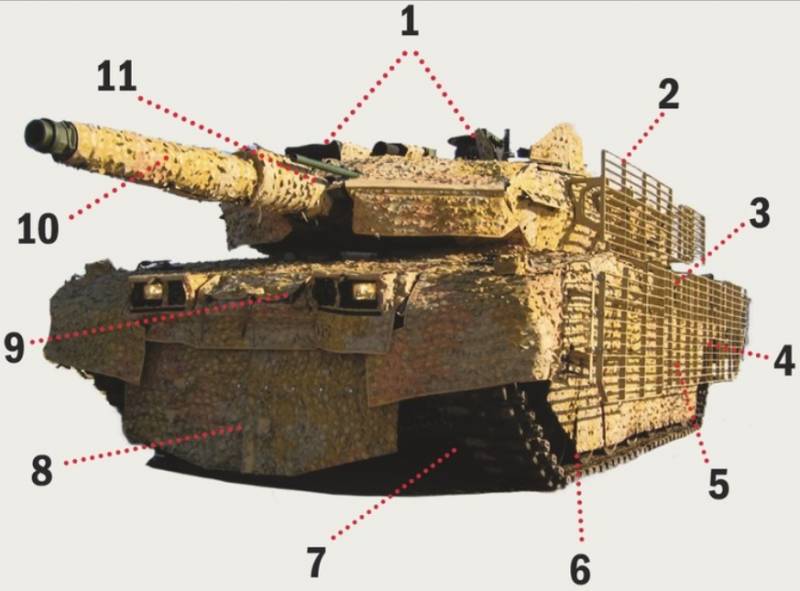 And do not ask me where and why this or that arrow in the picture looks - everyone can offend an artist, he sees it - as in the original source.

Additional changes
It is planned to add to the design of 16 machines based on the experience of the use of "Leopards" in Afghanistan, including:

12. additional booking of surveillance devices on the roof of the tower;
13. outdoor baskets of increased volume for movable property and spare parts;
14. additional fuel tank;
15. external control panel with emergency stop button - when the mechanical drive died in July of the 2008, the control over the vehicle was lost and it was hardly restored;
16. screen-diffusers on the exhaust pipes of the engine to reduce the visibility of the machine in the IR range;
17. additional air compressor;
18. Anti-cumulative screens of increased area to protect the chassis;
19. camouflage set for side projections of the body;
20. new automatic fire extinguishing system;
21. armored box with a telephone set in the aft part of the tank for communication of the commander of the interacting infantry unit with the crew of the tank, especially when fighting in the village (previously a similar system was installed on the Danish Leopard 1, but then such useful experience was safely forgotten);
22. regular turret installation for a machine gun above the loader hatch - in the previous modifications only the possibility of temporary fastening was provided;
23. a wire cutter in the front of the tower to prevent damage to the outer parts and crew members in the hatches when operating in urban environments. 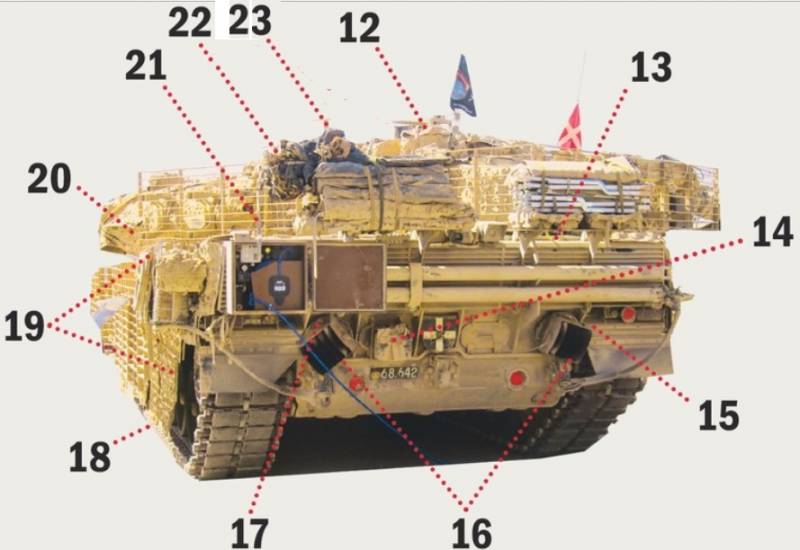 You can compare the view from the stern before and after the upgrade.

For those who have little hint at the location of the front view camera of the mechanical drive and wire cutter, I can offer a few more photos from the prototype tests in Afghanistan. At the same time, evaluate nowhere separately the announced installation of a sun umbrella over the hatches of the tower. For some time, such an additional option in a hot climate has been highly desirable among many Europeans. The same sometimes sin the Israelites. But the Americans and the Russians have never seemed to notice anything of the kind. 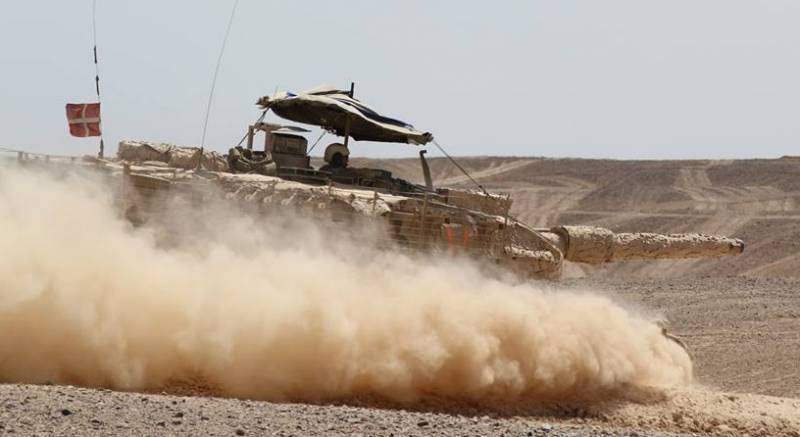 The bulk of the work is planned to be performed at KMW enterprises. The return of the upgraded equipment from Germany to the ground forces is expected in 2019-2021. The total cost of the program is $ 119,7 million, excluding the costs of preliminary R & D.

It is alleged that upon completion of all the work of the machine will not only meet the standard "Leopard-2А7", but also surpass this modification of the German machine in certain indicators.

At the same time, the MBT mass will increase by five tons, and the maximum speed will drop to 60 km / h. But the command of the SV of Denmark hopes that despite this, after the modernization, their “Leopards” will largely retain their combat potential and remain the main combat unit of the tank units of the ground forces until the 2035 of the year.