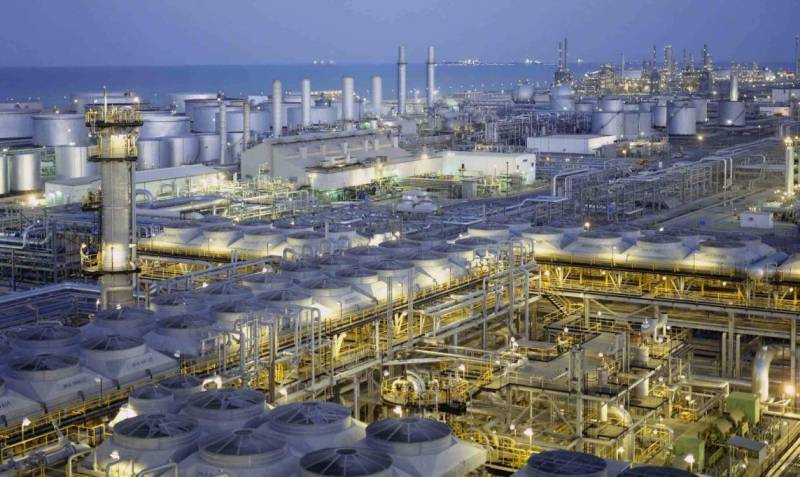 Saudi Aramco is an oil company established in 1933 as a result of a concession agreement between the government of Saudi Arabia and the American company Standard Oil of California. The original name is California-Arabian Standard Oil Company; With 1944, the company became the Arabian American Oil Company.

In 1950, King Abdulaziz Ibn Saud threatened to nationalize oil in the country, thereby forcing the American partner to agree on the division of profits for 50 / 50. The company's headquarters was moved from New York to Saudi Arabia (Dhahran). In the 1973 year, after the American support of Israel during the Yom Kippur War, the government of Saudi Arabia acquired 25% of the company's shares, having increased its share to 1974% by 60. Finally, in 1980, the company at 100 percent became owned by the government of Saudi Arabia. In November, 1988, the company was given a new name - Saudi Arabian Oil Company (or Saudi Aramco). It is the largest company in Saudi Arabia, the foundation of the entire Saudi economy and financial system. Until recently, 90 percent of the company's profits went to the state budget.

Saudi Aramco is a non-public company, it has no shares traded on the market, and it does not publish financial statements. This somewhat complicates the assessment of the company, however, no one has any doubt that Saudi Aramco is the world's largest oil company. It owns more than 100 oil and oil and gas fields in Saudi Arabia with reserves of at least 264 billion barrels of oil, which is estimated at about a quarter of the world's proven reserves of this raw material. There is no comprehensive picture of the company's production volumes, data are available only for some years. So, in 2013, Saudi Aramco produced 3,4 billion barrels of crude oil. According to experts, the annual production of oil and gas in a single equivalent is approximately twice as large for the Saudi company as the largest American company Exxon Mobil. It is noteworthy that Saudi Aramco never figures in the ratings of the world's largest oil-producing companies, because it does not publish such financial indicators as profits, turnover, assets and market capitalization. Therefore, the first lines of the ratings are occupied by American ExxonMobil and Chevron, Chinese Sinopec and PetroChina, Anglo-Dutch Royal Dutch Shell, British BP, French Total. However, everyone is well aware that these leaders of the world oil business are dwarfs in the background of Saudi Aramco. It has branches, joint ventures and subsidiaries in China, Japan, the Philippines, the Republic of Korea, Singapore, the United Arab Emirates, the United States and the United Kingdom. There is a fleet of supertankers.

A real sensation was the statement made by Saudi Aramco’s management at the beginning of 2016 about plans to privatize a part of the company through an IPO procedure (offering shares for sale in the stock market). A number of official representatives of the government of Saudi Arabia declare that the privatization proceeds of Saudi Aramco will be mainly used for the development of the company itself. Today, the company is mainly engaged in the extraction and export of crude oil, and Saudi Aramco needs to be turned into a diversified company with deep processing of hydrocarbons; The money raised will be used to create facilities for the production of petroleum products and a wide range of petrochemicals.

Another version of the reasons for privatization - the money from the partial sale of Saudi Aramco will go to the formation of a national sovereign fund. It is said about plans to make it the world's largest sovereign fund in the amount of 2 trillion. dollars to finance a large-scale program to diversify the Saudi economy. The country should prepare in advance for the completion of the “oil age”, move away from mono-product (oil) specialization. In Saudi Arabia, really hard work is underway to create such a program. Recently, the first conference “Investment Initiative of the Future” ended in Riyadh, at which the representatives of Saudi Arabia announced some parameters of a future program of restructuring their economies. Diversification will be carried out not only at the expense of the restructuring of the economy in the country, but also due to the acquisition of assets by Saudi Arabia abroad.

Saudi Aramco shares are expected to be up for sale, equivalent to approximately 5 to the company's interest. To understand how much it will be in absolute terms, we need an estimate of the possible market value of the company. Almost the next day after the announcement of the possible sale of a part of the company (it was January 2016), a sensational assessment by an independent oil analyst Mohammed Al-Sabbana, who had previously worked as a senior adviser to the Saudi Ministry of Petroleum, appeared in the world media. He valued the company at 10.000.000.000.000 (ten trillion) US dollars. For comparison, I note that the capitalization of the largest American oil company ExxonMobil in 2016 in the year barely exceeded 350 billion dollars. Later, however, the sensational foam in the estimates began to disappear. Began to be called more reasonable numbers, often 2 trillion. This meant that Saudi Arabia would be able to gain from the sale of 5% of the company an amount approximately equal to 100 billion dollars. The company's main advantage is not even the current record volume of oil production, but Saudi Aramco’s hydrocarbon reserves. None of the people involved in the ratings of the world oil business is even close to the Saudi company.

Currently, Riyadh is clarifying and verifying data on hydrocarbon reserves in fields owned by Saudi Aramco. Carefully preparing financial statements in those formats that are necessary for the public offering of shares. The company is being restructured, its organizational structure and management is being optimized. Finally, an important step has been taken, such as reducing corporate income taxes. Traditionally, the tax rate was equal to 90%, this year it is set at 50%, which roughly corresponds to the level of taxation of the leading Western oil companies. Lowering the tax rate raises dividends and makes the company more attractive in terms of investment.

The leadership of Saudi Arabia conducted negotiations with potential exchange platforms where Saudi Aramco shares could be placed. The main contenders were considered stock exchanges in New York and London. Between them, even began a fight for the right to carry out an operation. Riyadh has become skillful enough to play on this competition, bargaining over the commission for placement.

However, since the beginning of this year, the market value estimates of Saudi Aramco began to decline unexpectedly. Estimates of the company's capitalization began to appear, equal to 1,5 trillion. dollars, then - 1 trillion The consulting company Wood Mackenzie estimated Saudi Aramco in general at 400 billion dollars, which brought it closer to the American ExxonMobil. Suddenly, Western consultants talked about the need to "discount" the price of a Saudi company, since it is state-owned, and on stock markets, securities of all state issuers, by definition, must be sold with a "discount". They say the same Saudi Aramco today has a tax rate of 50% profit, and tomorrow the government as the owner of the company will again return to the 90% rate with one stroke of the pen. In addition, there was a fear that oil prices in the coming years will be low, and Saudi Aramco will not be able to give greater profits. However, all this does not explain in any way why, for the year of evaluation, the Saudi company sank so hard.

Experts believe the reason for this is the pressure of Washington on Riyadh on the issue, which can be partly called oil, and partly currency. Washington’s pressure, in turn, is a reaction to the pressure that China has on Riyadh, which seeks Saudi Aramco to supply it with oil not for dollars, but for yuan. China today has become the world's largest oil importer, pushing the United States to second place. At the same time, China is the main buyer of Saudi oil, and it does not want to pay more for black gold with American currency. A number of oil exporters to China have already made a partial or full transition to calculations in yuan. This, above all, Nigeria and Iran. More recently, Russia has begun to supply oil to China for yuan (so far, however, their share is insignificant).

Saudi Arabia, however, being dependent on the United States, has so far refused to accept RMB calculations. True, such a refusal costs her dearly: China is gradually replacing it with other suppliers. Until recently, the Saudis ranked first in the supply of oil to China, now Russia has pushed them to second place. If things continue this way, Saudi Aramco could lose the Chinese market altogether.

Riyadh was between the hammer and the anvil. It is hard to even imagine what kind of blows could befall Saudi Arabia from across the Atlantic if it sells at least one barrel of oil for Chinese currency. After all, it will be a direct challenge to the petrodollar, which was born in Saudi Arabia in the 70 of the twentieth century after the negotiations of Henry Kissinger and King Faisal.

Washington strictly warns Riyadh to refrain from an ill-considered move to replace the dollar with the yuan in trade with China. This will be an example for other participants in the oil market (oil can be traded for rubles, rupees, rials, etc.). And tomorrow the epidemic of transition to national currencies may spread to other commodity markets. By the way, Beijing this year begins trading on its commodity exchanges with oil futures denominated in RMB, and declares that this is only the first step.

Surrounded by the president of the United States, there are already proposals to block the placement of Saudi Aramco shares on the New York Stock Exchange. There are signs of an organized short game in relation to the Saudi oil company. Under these conditions, Riyadh announced the postponement of shares to a more distant time. However, the situation itself will not resolve, Saudi Arabia will still have to make a choice between the dollar and the yuan.

Intensifying pressure on Riyadh, Beijing at the same time suggested that Saudis buy Saudi Aramco’s 5 percent directly without using the common stock placement ritual on Western stock markets. And I am ready to pay for this “fair” price (approximately 100 billion dollars). The Chinese authorities have already announced that they are forming a consortium of energy and financial companies, as well as the Sovereign Fund of China in order to buy a “piece” of a Saudi company. According to Chinese media, this consortium is ready to become anchor investor in Saudi Aramco.

Beijing's win-win move in a chess game with Washington neutralizes the US threat to disrupt the sale of Saudi Aramco and at the same time pushes Riyadh to make a decision to switch over to yuan in the trade of Saudi oil.

Intrigue in the triangle Beijing - Riyadh - Washington takes a serious character, but war can replace the game. That is why the Saudi king visited Moscow in early October.

Ctrl Enter
Noticed oshЫbku Highlight text and press. Ctrl + Enter
We are
The keys to the world are in the hands of RussiaList of destroyed the largest and most high-tech enterprises
Military Reviewin Yandex News
Military Reviewin Google News
9 comments
Information
Dear reader, to leave comments on the publication, you must to register.