November 3 2017
37
Some Russian projects in the field of underwater fleet they face certain problems that hinder timely and full implementation of all existing plans. Failures and successes in this area attract the attention of specialists and the public. In addition, Russian projects are of interest to foreign experts.


October 28: The National Interest published a new article by Sebastian Robin, entitled “Why Our New Stealth Submarines Have a Big Problem” (“Why the new Russian“ subtle ”big problem). As the name implies, the material from the headings The Buzz and Security is devoted to the peculiarities and problems of the development of Russian submarines.

The author begins his article with a reminder of recent Russian media reports. Shortly before its publication, the Russian press announced the plans of the Ministry of Defense, which envisage the construction of two Lada-type submarines (project 677). Thus, as S. Roblin reminds, the construction of two new ships will start approximately two decades after the laying of the St. Petersburg head submarine. 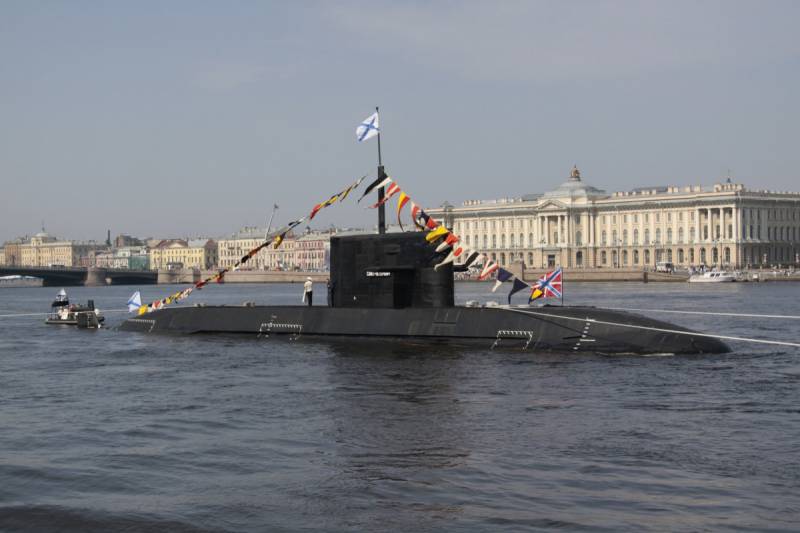 It is noted that in some publications on the new plans of the military department there is a delicate reservation. According to these reports, the new submarines of the 677 project will not receive an air-independent power plant (VNEU) and will be equipped with "traditional" diesel-electric systems. However, it is VNEU that is the key component of the non-nuclear submarine of the new generation.

The author recalls that a nuclear submarine can be several times more expensive than a diesel-electric ship, but it differs from it in lower noise, higher speed and unlimited navigation in a submerged position. Submarines with diesel engines, in turn, are noisier, and also require regular ascent, which leads to known risks.

Despite certain technical drawbacks, the majority of the fleets, having limited financial capabilities, operate precisely the diesel-electric submarines, both independently and as an addition to nuclear submarines. As for the relatively small range of action in a submerged position, it is not a big problem when solving the task of protecting coastal waters.

However, the development of non-nuclear submarines continues. In the nineties and two thousand years, promising air-independent power plants were introduced in the new projects, significantly increasing the capabilities of technology. Boats with such equipment can remain under water for days and weeks, although the speed of the underwater course is noticeably reduced. The main manufacturers of submarines with VNEU are Germany, France, Sweden, Japan and China. These countries are rearming their fleets, as well as building submarines for export.

S. Robin recalls that a large number of diesel-electric submarines were always present in the Russian Navy. As a consequence, it made sense to develop its own VNEU for promising submarines. In 1997, the construction of the St. Petersburg submarine of the Lada project 677 began at the Admiralty Shipyards. In the 2005 and 2006, the ships of the same type were laid, the Kronstadt and Sevastopol (later renamed the “Great Luke”).

The Lada project was supposed to be the fourth “generation” of successful submarines of the 877 “Halibus” and 636 “Varshavyanka” projects. According to the three existing projects of this family about fifty submarines were built for the fleets of Russia, China, Vietnam, Poland, Algeria and Iran. Modernized versions of such boats, built on projects 636 and 636.3, are among the quietest submarines. According to some reports, in terms of noise, 636.3 type submarines can be compared with modernized versions of atomic Los Angeles.

In December, the 2015 of the Rostov-on-Don submarine of the 636.3 project became the first representative of the Russian submarine fleet after World War II to use its weapon against the real goal. She performed a missile attack on objects in Syria.

S. Roblin points out that the authors of the Lada project 677 at one time promised to make the new submarine twice as loud as compared to Varshavyanka. The lead ship of this type, "St. Petersburg", was launched in 2004 year, but still retains the status of the test bench. This boat is smaller than the submarines of the 877 / 636 project: it has a length of 67 m with a displacement of 1765 t. Unlike the vast majority of post-war boats of the Soviet Union and Russia, it was built according to a single-hull scheme. The ship is operated by a crew of 35 people. There are eight 533-mm torpedo tubes with 18 torpedoes or missiles on board.

Other characteristic features of St. Petersburg are the Lyra hydroacoustic complex, the Litiy combat information and control system, electromagnetic radiation detection equipment, the Molniya anti-hydroacoustic coating and a seven-blade propeller with means for removing eddies.

The key innovation of the 677 project was an air-independent power plant. According to Russian press reports, such a VNEU was supposed to extract hydrogen from diesel fuel, further used by other equipment. As stated, such a scheme has certain advantages over alternative solutions, such as a Stirling engine or hydrogen fuel cells. It differs from them by less noise, due to the absence of moving parts, as well as greater safety, provided by the rejection of the need to store flammable gases. The author points out that the latter factor is of particular importance, since in recent decades fires on Soviet and Russian boats have repeatedly led to tragic consequences.

The Chinese naval forces include several Yuan-type submarines equipped with a VNEU based on a Stirling engine. At the same time, Beijing announced its desire to acquire four Russian Lada. Also in the past, the Admiralty Shipyards pointed to the possibility of serial construction of a simplified non-nuclear submarine of the Amur-950 project. Among other things, such a submarine differed in displacement less than 1 thousand tons and crew, reduced to 21 person. This project attracted the attention of Morocco. In addition, it was offered to India as part of the Project 75I program.

Nevertheless, reminds the author of The National Interest, the submarine "St. Petersburg" did not cope with the tests. In November 2011 of the year, the Russian edition of Izvestia reported on certain problems. So, it turned out that the D-49 type generators used in conjunction with the main engine power 2700 hp, do not show the desired characteristics. They gave out only half of the required power. A number of other systems were also missing: torpedoes and sonar equipment were still under development. The construction of the new 677 ships has been halted. In this case, as reported, the two new buildings received most of the required equipment.

Later, Navy Commander-in-Chief Admiral Vladimir Vysotsky criticized the current state of the Lada project. He noted that in terms of energy, the most modern submarine can be compared only with ships of the Great Patriotic War, and therefore it is hardly necessary for someone.

In 2013, the ITAR-TASS edition announced the resumption of work under the 677 project. However, S. Robin thinks that actions speak more than words. For example, during the same period, the Ministry of Defense ordered six VELS of the Varshavyanka project 636.3 to re-equip the Pacific Fleet. Most experts considered this order a confirmation that Russia could not create the desired air-independent power plant. The reasons for this could be related to a lack of funding or a well-known trend, which is to announce new projects that were not destined to be implemented.

Russian officials regularly raised the topic of the VNEU and discussed the advantages of submarines with such equipment. However, over the past few years, the main financial flow has been spent on building multi-purpose nuclear submarines of the 885 Yasen project and strategic missile carriers of the Borey 955 project.

In 2014, the Russian Ministry of Defense updated plans for the “fourth generation” of non-nuclear submarines. Now it was proposed to create the required ships in the framework of the Kalina project, which provided for the use of the VNEU. Most of the information about the requirements for this project has remained secret, but some of the data is still published. It became known that a fully equipped submarine "Kalina" will be able to remain under water for up to 25 days. In this case, its power plant will be built on a modular principle. It was assumed that initially the ships will receive traditional diesel-electric systems, and then - after the completion of the relevant project - they will be replaced with air-independent ones.

Some reports mentioned that the project of the VNEU for the Kalina submarines is already being developed, but other sources did not share this optimism. According to their data, a full-fledged power unit of a fundamentally new type will appear only at the beginning of the next decade.

The author of The National Interest recalls other proposals in the field of non-nuclear submarines. So, earlier Russian experts talked about the possibility of using high-capacity lithium-ion batteries. However, to date, no country has introduced such equipment on their submarines. Japan and South Korea came close to solving this problem, but still did not cope with it to the end.

Anyway, the construction of non-nuclear submarines of the 677 "Lada" project will be continued. Submarines "Kronstadt" and "Great Luke", despite all the difficulties, will be completed. Their launch is scheduled for 2019 and 2021 years, respectively. In this case, the submarines will not receive an air-independent power plant and will be equipped with "traditional" diesel engines. The continuation of the construction of the second and third series of boats was announced last year.

In June, 2017 Navy Commander Admiral Vladimir Korolev again touched upon the plans of the military department regarding the development of diesel-electric and non-nuclear submarines. According to him, in the future two more Lads will be laid. The fourth and fifth submarines of the 677 project can receive both a diesel-electric and an air-independent energy installation. Such aspects of the project will depend on the achievements of the industry, namely the availability of ready-made VNEU, suitable for use in practice.

According to Sebastian Roblin, diesel-electric submarines "Kronstadt" received a power plant, built on the basis of mastered units. Its main elements are two diesel generator power 1250 HP. In addition, the main motor is used DL-42 horsepower 5500. Such equipment is now being installed in the new "Varshavyanka". Apparently, the next two submarines will receive this or that new equipment. For example, it may be an anti-hydroacoustic coating "Lightning". It will be able to reduce the noise of the boat, equipped with not the quietest power plant.


The article “Why Russia's New 'Stealth' Submarines Have a Big Problem”:
http://nationalinterest.org/blog/why-russias-new-stealth-submarines-have-big-problem-22941