March 31 2012
13
The first Soviet nuclear submarine "Leninsky Komsomol" experienced during its military service a great triumph, as well as a great tragedy. Moreover, this tragedy did not become available to the general public either in 1967 or in the period of perestroika, and there are few of us today who know about it.


The decision to start designing a nuclear submarine in the Soviet Union was made at the beginning of the 50s. Stalin himself 12 September 1952 of the year signed a decree "On the design and construction of the object 627". The birth of the firstborn of the domestic nuclear shipbuilding took place in an atmosphere of deep secrecy. The chief designer was V. N. Peregudov, since 1953, the project was led by S. A. Bazilevsky. Meanwhile, in 1954, the Americans released their first Nautilus submarine. 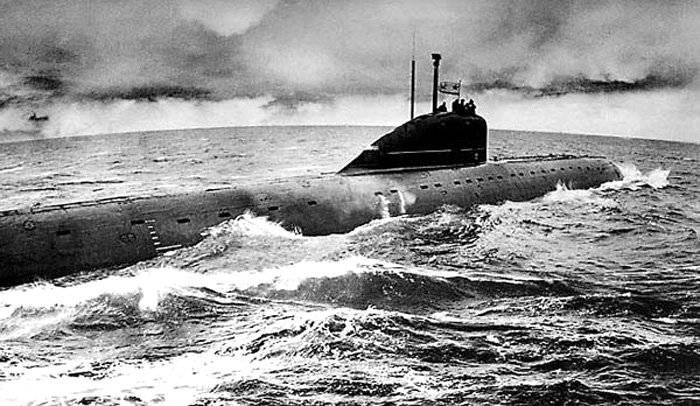 Initially, the Soviet nuclear submarine had the name K-3, with the American "Nautilus" it had nothing in common. Housing K-3 was designed from scratch, the main emphasis was placed on the quality of the underwater stroke. The boat turned out to be faster than the “Nautilus”, with a pressurized water reactor.

At first, the developers planned to use a single thermonuclear torpedo on the submarine to attack enemy naval bases, capable of hitting a target at a distance of 50 kilometers. However, by this time the British and Americans had already established anti-submarine frontiers at a distance of 100 kilometers from the coast. A commission was established that decided that the country needed a submarine capable of destroying ships in the seas and oceans, but for this there must be more than one torpedo. It is necessary to have a large stock of torpedoes with nuclear warheads on board the boat. Thus, the construction task K-3 corrected, and the hull of the submarine had to be redone.

The first domestic nuclear-powered icebreaker was laid on 24 on September 1955 of the year in Severodvinsk. The whole country took part in the construction of K-3, although it did not even suspect it. A special steel was developed at the Moscow plant, which allowed diving to the depth that was unthinkable in those years - 300 meters. Reactors were manufactured at Gorky, and steam turbine units were manufactured at the Leningrad Kirov Plant. The submarine commander in the same year was appointed the captain of the 1 rank L. G. Osipenko. Getting into the number of the first officers of the nuclear boat was as prestigious as getting into the cosmonaut squad. For the first time, the 9 of October 1957 of the year was launched on the submarine.

In those years, in the West, no one believed that a nuclear submarine fleet could be built in a war-torn Soviet Union. The American Nautilus crossed the North Pole still 3 August 1958 of the year. Since then, the Soviet Union was in the zone of reach of missiles, which at any time could be launched from American submarines in the Arctic. Therefore, when K-1962 reached the pole in 3, it was a shock for other states, especially for the USA. There is information that Alain Dulles, who led the CIA at the time, even lost his post because he did not know anything about the Soviet sailors' march to the North Pole. Then the USSR was able to prove to the whole world that he was still capable of much.

In the summer of 1962, K-3 was no longer the only nuclear submarine in the country's Navy. Other ships could have traveled to the Arctic, especially since the Troika was already battered by this time. Being the leading specimen, it was subjected to all sorts of tests, and the limiting regimes of all devices, first of all, the reactor, steam generators, and turbines were tested on it. In addition, being designed in a great hurry, the boat was constantly in need of repair, finishing work and alterations. There was literally no living space on the steam generators - solid, overcooked and muffled tubes.

Why, then, the Soviet authorities, knowing about the almost emergency condition of K-3, still sent the boat to such an important campaign for the country? The answer is quite obvious: choosing between technology and people, we mainly hope for the latter. Therefore, during the march to the North Pole, the maintenance of the boat in working condition was provided mainly by a qualified crew who carried out complex repairs on their own.

He commanded K-3 during a trip to the Arctic Lev Mikhailovich Zhiltsov. Together with his crew he walked under the ice directly to the “top of the head” of the Earth. At that time there was no detailed map with isobaths of depths and marks of underwater peaks, that is, the boat moved blindly and aloud. A huge thick layer of ice over the submarine reflected the noises of its own propellers, giving rise to auditory illusions, the acoustics working under impossible conditions. And then, one day, they felt that the depth under the keel had sharply decreased.

After receiving an alarming report, the residents ordered a little up to the top and reduce the speed of the boat. Experts have carefully studied the echogram, so was discovered a giant underwater ridge at the bottom of the Arctic Ocean. This was the largest geographical discovery of the 20 century, after the Northern Earth, mapped in 1913 year. The discovered underwater ridge was named after the famous hydrographer Jacob Gakkel.

The Soviet nuclear submarine K-3, which was later renamed Leninsky Komsomol, crossed the North Pole point on July 17 of the year 1962 in 6 minutes and 50 seconds in July. The crew of the ship, jokingly, suggested that the midshipman-helmsman slightly move away from the course so as not to bend the "earth axis". Lev Zhiltsov later recalled that the thickness of the ice in those places was approximately 10 meters. The boat was driven close to the surface, and when they noticed wormwood, they immediately surfaced. The nose of the submarine then froze at the very edge of the ice, from all sides K-25 was trapped by endless snow. According to the submarine commander, there was such silence around that it even rang in the ears. 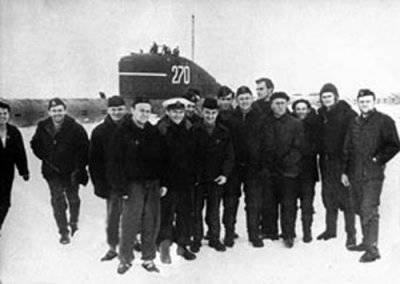 The national flag was solemnly hoisted on the highest hummocks, and the crew of the troika was fired ashore. The moment of vigorous submariners fun is captured on a multitude of shots. It is noteworthy that before the boat went on a hike, the officers of the special security department checked the ship for the presence of cameras, it was strictly forbidden to take pictures. But who knows the boat and the secret places better than the submariners? Back to the base were in full swing.

About five years later, the nuclear-powered ship "Leninsky Komsomol" was sent on a combat watch to the Mediterranean Sea. The assistant commander of the submarine, captain-lieutenant Alexander Leskov said that this decision was initially erroneous: the last years the crew mainly attended various events: party and Komsomol congresses, no combat training and going to sea. And then immediately - a long hike. The crew of the ship was also assembled in a hurry, since according to the plan for another patrol, the K-11 had to go to the Mediterranean Sea, however, she found a serious malfunction.

Leskov was appointed assistant captain two days before the ship’s release on duty, Yuri Stepanov was appointed commander a month before sailing. All the days of the patrol on 80, something was constantly going wrong: first technical problems, then one of the crew members died. An order was received to surface and transfer the body to one of the Soviet ships that were nearby. The nuclear-powered ship was declassified, it was necessary to return to the base. When the submarine was in the Norwegian Sea, a terrible tragedy occurred.
On that day, September 8, Alexander Leskov was in charge of the command post at the central post. In 01 hour 52 minutes, a signal was received on the communications console. The assistant commander clicked the tumbler and asked: "Who causes the Central?". Then he let go of the switch, and terrible screams of people burning alive sounded in the room. For many years, then he dreamed at night these cries.

As it turned out, in the nose torpedo compartment ignited vapors of flammable hydraulics. The fire spread rapidly. The 39 people in the first and second compartment burned down in a matter of minutes. A little more and the whole torpedo ammunition would explode. The situation was saved by the commander of the second compartment, captain-lieutenant Anatoly Malyar, who, before he died, managed to slam the hatch from the inside, thus preventing the further spread of fire. The commander of the nuclear-powered boat, Stepanov, gave the order to equalize the pressure with the emergency compartments, as the TNT explodes while simultaneously increasing the pressure and temperature. The crew members put on their gas masks, and Captain Leskov opened the Klinket with exhaust ventilation. Immediately on the central post burst black smoke with poisonous gases.

Stepanov lost consciousness, Leskov took command. He managed to give a signal the fleet about the accident on the submarine and conduct an emergency ascent. At two in the morning, the surviving crew left the central post and climbed the bridge. Submarine surfaced, and then under its own power returned to the base.

The commission formed on the coast at first recognized the actions of the crew as heroic. All sailors, including the dead, were presented to the award. The cause of ignition in the torpedo compartment was a breakthrough of one of the hydraulics system units: instead of a red copper gasket, there was a primitive washer cut from a paronite and not designed for pressure drops. Apparently, someone during the factory repair changed the gasket. Over time, the sealer was liquefied, and an oil breakthrough occurred, which immediately ignited.

However, a month later, the commander-in-chief of the Navy, S. Gorshkov, stated that the accident was caused by the crew. The results of the first commission were annulled and a second, obviously biased, was appointed, which suddenly found a lighter on the watch desk. Thus, the entire surviving crew of heroes turned into criminals. It turns out that they not only unjustly accused the sailors of K-3, but also outraged the memory of their fallen comrades. 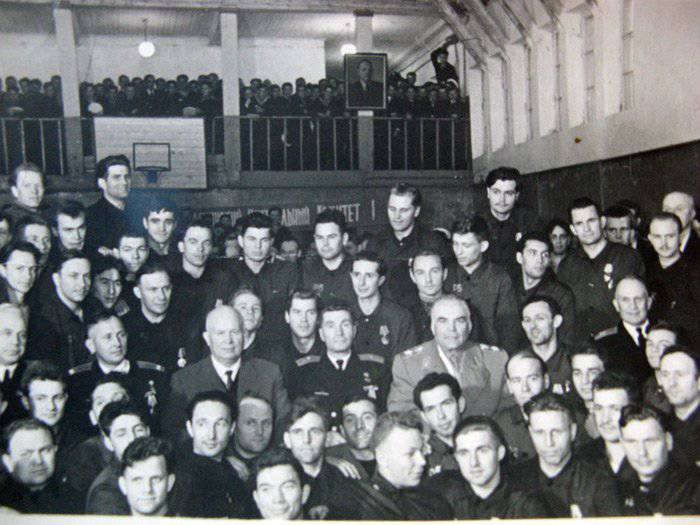 The following 30 years tried to achieve the truth of the participants in the tragedy, where they did not write to which authorities they did not apply. In the presidential administration, the sailors were told that rehabilitation and rewarding can be carried out only by the commander-in-chief of the Navy. In the meantime, one after another, the submariners passed away, surviving more than seventy years.

And recently, the resolution of President Dmitry Medvedev helped to restore the good name of the crew of the nuclear-powered ship “Leninsky Komsomolets”. The headquarters of the Navy demanded archival documents, personal files of the crew members. As a result, the main technical department acknowledged that the accident occurred through no fault of the divers. After only 45 years, they waited for justice.

Leskov A. Ya. At the beginning of the accident fainted and woke up after 5 days after his delivery to the hospital on the shore. He was rescued by the surviving crew members of K-3.
(Sent to the editors of the reader "IN" 11.01.2014 g.).