A fish that saved an entire city: a monument to hamsa was opened in Novorossiysk

November 3 2017
42
The inconspicuous small fish Hamsa for Novorossiysk is not just a inhabitant of the Black Sea, but a real symbol of the city, and most importantly a savior from starvation, a second bread. Every year, during fishing season in Novorossiysk, as mushrooms after rain, Khamsov tents appear, selling salted fish and never losing money. But, unfortunately, the younger generation, growing in an atmosphere of popularization of chess-like rolls, is not so familiar with the fact that it was the unsightly Hamsa who saved tens of thousands of lives during the famine of both the Civil War and the Great Patriotic War.


The civil war went through a bloody ax all over Russia. Hunger is a favorite ally of such tragedies. Being in a desperate situation, the new government in Novorossiysk turned its gaze to the sea. After all, it was not necessary to expect fast and sufficient for the life of the city food supplies from the continental Kuban, many villages of which were simply burned. And in the rocky soils of the Black Sea it is easier to grow grapes than potatoes in sufficient quantities. And you will not be full of grapes.

Before the Civil War, the hamsa’s catch was tens of thousands of poods, which means it’s time to return to the sea. In the 1920 year, the thinned fishing fleet did not even reach the 10 thousands, but even this modest catch saved lives. By the year 1940, the annual catch of the Black Sea Khamsa finally reached 20 by thousands of pounds.

Against the backdrop of the harsh Novorossiysk autumn

And then the war broke out again, this time, the Great Patriotic War. As you know, wartime forced the fishermen to quit their craft and take up weapon. The same was true of fishing vessels. Nearly the entire peace fleet got under the gun, from fairly modern trawlers to old low-speed lugues. For example, entered into history “Mackerel”, armed with the installation of the RS “Katyusha”, is famous for wiping out the artillery battery on the Cape of Love in the occupied part of Novorossiysk. At the same time the “Mackerel” itself was a simple wooden schooner.

Thus, the vessels remaining in service were ancient and unsafe to operate. It’s like the Black Sea has become deadly because of German submarines, Schnellbots, aviation and mines, it was not enough. But the Black Sea coast was almost divorced from the whole country, therefore, to supply food to the civilian population and the army, fish was needed at all costs. It became hamsa, and sometimes dolphins, which is really sad. 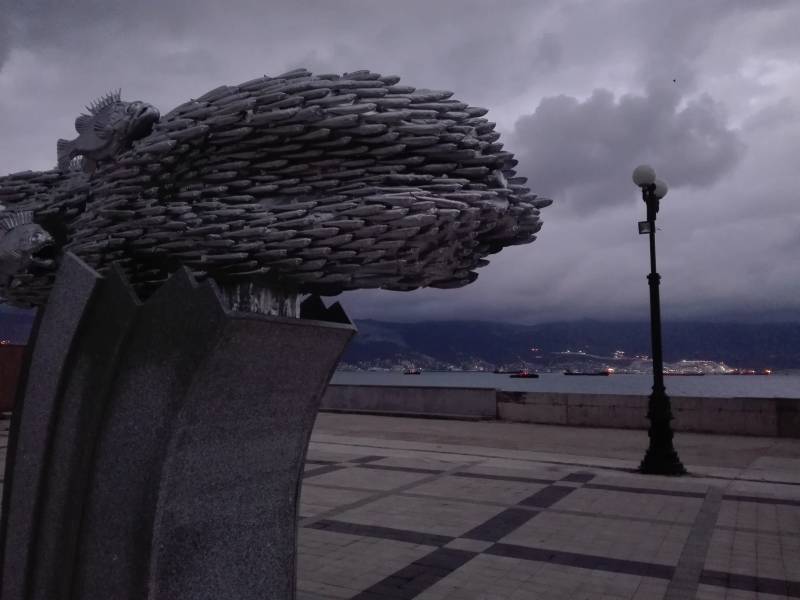 And immediately after the liberation of Novorossiysk, a completely ruined city, in 1943, Black Sea fishermen managed to exceed the catch plan 4 times! In the desperate hours of the approaching famine, even camouflage nets were used for fishing. However, already in 1944, the catch of hamsa approached 25 thousand centners. This was partly a consequence of the decline in fishing activity. fleet during the fighting.

And finally, in Novorossiysk, on the embankment of Admiral Serebryakov, they unveiled a monument to this wonderful fish. The very idea to perpetuate the gratitude of the Novorossiysk Black Sea Hamsa has long been in sight. For the first time, the townspeople who survived the war talked about this and rebuilt the city. Their table was unthinkable without hamsa, and since the feeling of gratitude was then disproportionately more valuable than now, citizens and veterans repeatedly suggested creating a monument to a small fish.

But the city authorities, who rather took care of how they look from the regional capital and from Moscow in the eyes of their bosses, could not understand why they needed a monument to some fish in the city of the military glory of Little Earth. And most importantly, they could not even imagine how they would explain the essence of the installation of such a monument to their high authorities. After all, this very bosses hardly experienced a post-war famine in a seaside city, and it is also unlikely that it is able to realize that this part of the history of the city. And some citizens, especially older ones, generally believe that the fish made a kind of contribution to the defeat of Nazi Germany. 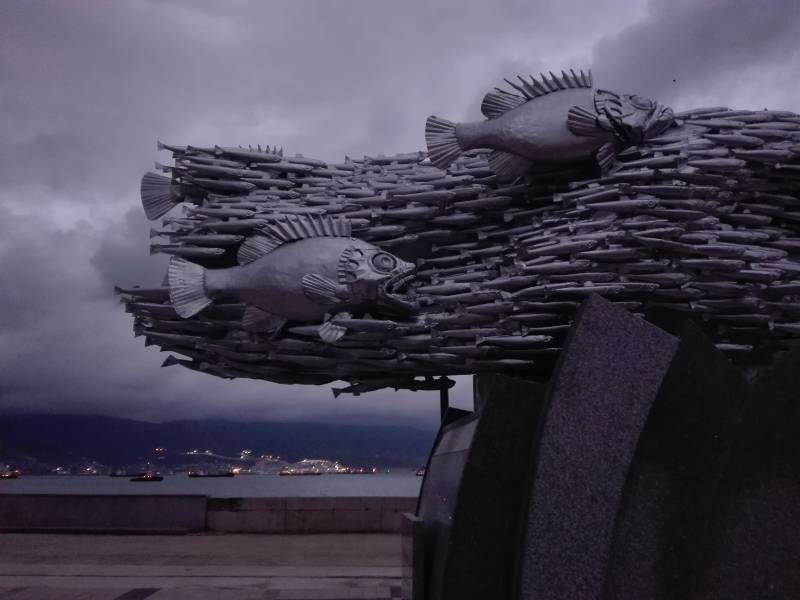 The monument seems to be a silver fish strayed into a flock, driven by a pair of large ruffs, as it seemed to the author. The whole composition is set on a pedestal, a bit like a wave. However, not without a spoon of tar.

First, the monument contains many small details. This attracted some citizens from the genetically hopeless subspecies, who with the help of wire cutters began to disassemble small metal fish for souvenirs.

Secondly, the organizational question and the very announcement of the discovery was somewhat ineptly resolved. Messages about the opening of the monument alternated with messages about the transfer date due to unavailability, then the pedestal, then the site itself. 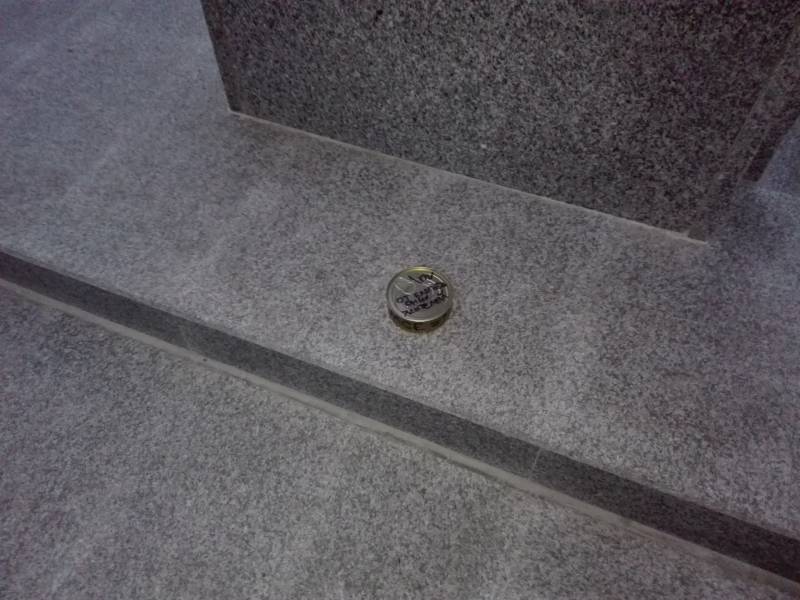 Whether a joke, or sentimentality - a jar of fish with the signature "from grateful inhabitants"

Thirdly, unfortunately, the fruits of modern education gave their shoots, and they did find their own home-grown critics who do not understand that this monument is a tangible reminder of the history of war and peace. That this is not a funny attraction, but a tangible story, so that the next generation does not suddenly blink, that the city was saved by a restaurant for the quick delivery of rolls and pizza. And in case of a delay during the bombing, the order is free ... Given the trend, there is such a danger. To those who say, why not to erect a monument to heroic fishermen, who showed the wonders of the sea craft in those conditions, I’ll note that there is such a monument in Novorossiysk on the Cape of Love, built back in the USSR. 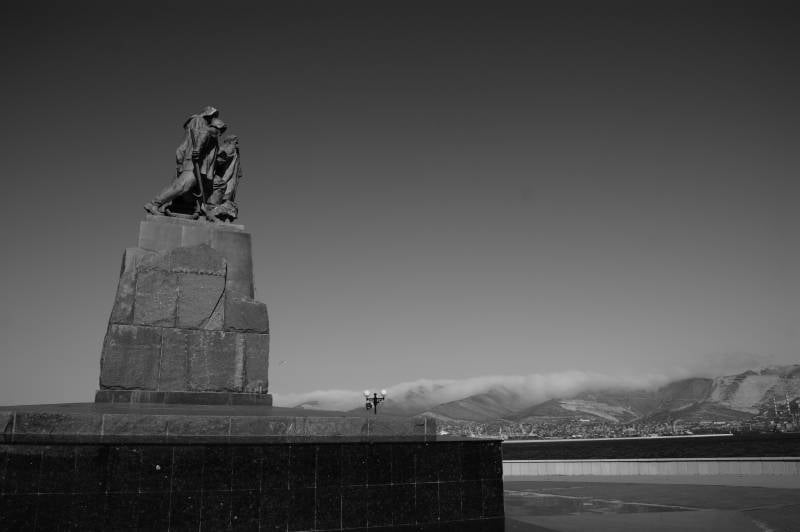 And, fourthly, it would be even more pleasant if city officials paid more attention (yes there is more, at least some) to all the monuments of the city, and not occasionally. They last distinguished themselves by the fact that they simply wanted to demolish the monument to the Red Army built by sculptor Alexander Kamper at their own expense on one of the slopes of Mount Koldun. But more about that next time.

Ctrl Enter
Noticed oshЫbku Highlight text and press. Ctrl + Enter
We are
Reports from the militia of New Russia for 27-28 September 2014 of the yearResults of the week. "Well, do not change me because of every idiot!"
42 comments
Information
Dear reader, to leave comments on the publication, you must to register.