The affair of Hitler lives: a report from hell 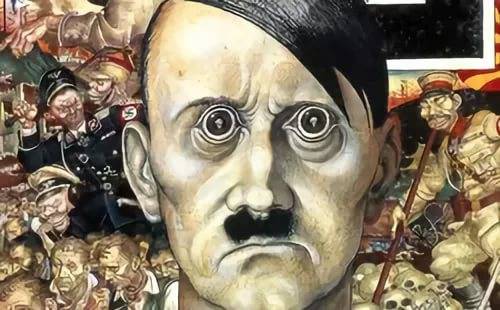 The other day in the imperial Reich Chancellery in Purgatory a landmark meeting was held.

“My Führer, my Führer,” Goering screamed in fright, then, “honestly, I’m not guilty ...”

- Shut up, idiot, - Hitler screamed, - I have not forgotten how you betrayed me in the spring of 45! Why the hell did I humiliate myself for thirty years in front of His Majesty Satan to get you out of the boiling tar and transfer you here to the Reich Chancellery, eh? Are you a little hellish torture? Here, look at Rosenberg and Himmler - they are not for nothing that they eat their own bread! Rosenberg completely fulfilled the task set by me in the great book “Mein Kampf” - the Soviet Union was disintegrated, the living space in the East is being freed ...

Ukrainians successfully destroy each other thanks to our true glorious Aryan Barack Obama, who in 2014, successfully conceived and implemented a coup d'état there ... Schellenberg and Canaris managed to break up the industry in Ukraine so well that in 41 did not dream neither the Wehrmacht nor your praised Luftwaffe! And Goebbels? This is generally a master of super class !!! His thesis about the Russian threat to the occupation of Europe is simply brilliant !!! A video about the heroic forest brothers on the NATO website would have done the honor of Die Dieche Wochenscha itself !!! And what are his ideas about the movement of Ukraine in the EU and the upcoming success of the reforms with a total reduction in wages and pensions, eh? I repeat again and again: you are a dummy, yes, yes, a dummy, Goring!

Hitler struggled fiercely with his fist on a giant table covered with green cloth and ran around the room. His adjutants, Schmundt and Klupke, standing near the entrance, turned as idols, behind the Fuhrer. From the edge of the table where Himmler was sitting, there was a mocking stifled chuckle.

“And Himmler,” continued Hitler, “this is a true master of his craft !!!” He managed to put things so that now the population of Ukraine per year is reduced by half a million people, you understand, you are an idiot fat! And Latvians, Estonians and Lithuanians will disappear altogether in a few decades ... All of them sincerely believe in the atrocities of the Stalinist regime, in which their numbers increased ....

That you do not even Auschwitz and Majdanek, combined, stupid! Is it clear or not? - indignantly spat the Fuhrer to the side, but hit the collar of Goering. Saliva immediately began to boil and burned through the cloth.

“My fy-rrrr,” Goering began, stammering, convulsively twirling his thick neck because of unbearable pain, “it's not me, it's all Borman ... It's all he ...”

“Ahhhhh,” the Führer screamed hysterically, stomping his legs and shaking his head, “shut your mouth, stupid hog, otherwise I’m ordering Schmundt to send you to the pan for three hundred years!” (with these words, the black velvet-silk sparkling tail of the adjutant readily stretched out) ...

Goering fell to his knees.

“Only not this, only not this, my Führer,” he cried, frantically wiping away the tears that rolled down the fat cheeks.

“So, you fat idiot, I ordered you to adequately award the President of Ukraine, Petro Poroshenko, for his devotion to our Nazi ideals.” He, together with the director of the Institute of National Remembrance Vyatrovich under the leadership of our agent Kurt Walker, did an excellent job on complete falsification. stories. A significant part of Ukrainians are now sincerely convinced that the 300 years were under Russian occupation, and Bandera and Shukhevych continuously and Greekly fought with the Wehrmacht !!! And how beautiful our torchlight processions in Kiev ... And what did you do?

“My Führer,” Goring said with relief, shivering, “my Führer, I assigned Poroshenko another military rank ...”

“You are a complete idiot,” Hitler shouted, “you assigned the title of“ corporal ”and awarded Poroshenko with a simple Iron Cross, although he is worthy of a Knight with oak leaves !!!

“But, my Führer,” the Reichsmarshal tried to object, “he has a different nation ... I was afraid that everyone would start to say“ there’s only Jews around ... ”

“Stop the flogging, Goering,” the Führer exclaimed, calming down.

“Obviously, of course, of course, my Führer,” Goring muttered, turning humbly on his knees for Hitler who was constantly running.

“Hm,” said Hitler, in satisfaction, “so ... Canaris, report on the situation in the United States ...”

“My Führer,” began the admiral, taking a pointer and approaching the globe, “must state with satisfaction, based on objective intelligence data, that in the USA, as you predicted, the Fourth Reich was successfully created. Americans sincerely believed that they are one chosen nation of God and are called to lead the world. Under the pretext of introducing democracy, as recommended by Dr. Goebbels, they arrange provocations wherever possible. The Gestapo division in the person of the Central Intelligence Agency successfully created the IG *, whose task is to guide our "new order" in the Middle East, in Europe and the subsequent destruction of Russia. Special merits in this historical process belong to the US Congress. He clearly performs not only all the instructions of the Reich Minister propaganda of Dr. Goebbels, but also actively takes the initiative. In particular, he is trying to strangle the Russian with sanctions, to organize the hungry blockade of Russia and make it one big Leningrad ...

“Josef, my friend,” said the Führer affectionately, approaching the place where Goebbels was sitting, “you again and again prove me your infinite loyalty, just like in April 45, I think it will be a well-deserved reward for you the abolition of all hellish torture for a millennium and the issuance of fifty grams of water after the meeting!

“Gentlemen, I think that the US Congress fully deserves to be accepted as a full member of our Hitler Youth,” Hitler declared, stroking his magnificent sheepdog Blondie on the head, “we will still be on the Volga ... And you, Goering, I warn: get down to business, you are on the verge of the last lap of the netherworld, Goering, you hear, you brainless ass!

- My Fuhrer, I will do everything I can! I swear, my Führer - stretched out and unsuccessfully trying to pull in a huge belly, snapped Goering, sighing with relief ... I will provide congressmen tomorrow with brown shorts and drums!

No one knew that the Russian resident shepherd dog Blondi, under the guise of which the experienced Soviet intelligence officer Stirlitz, aka Maxim Isaev, had already managed to inform the Kremlin.

* IG - an organization banned in the Russian Federation

Ctrl Enter
Noticed a mistake Highlight text and press. Ctrl + Enter
We are
"Points" over ÜValentin Falin: West and Russia in the XX century: connection of times
31 comment
Information
Dear reader, to leave comments on the publication, you must to register.