The strategy of extensive theaters

November 7 2017
27
The Polish "ledge", "balcony", "bag" - all these are the names of a part of the territory of the Kingdom of Poland that was part of the Russian Empire and influenced both the specifics of the strategic deployment and the operations of the 1914-1915 campaigns.


In the summer of 1915, after the end of the Gorlitsk operation, the Austro-German troops began to implement the "Summer Strategic Cannes" - and the Russian troops were forced to begin the Great Retreat. The retreat was carried out according to a single strategic plan, while Russian troops launched effective counterattacks. The main reason for the strategic retreat was the need to level the front and correctly evacuate the Advanced Theater — not to allow the army located in central Poland to be locked into a strategic "boiler". We wrote about the strategic pullback as a type of maneuver in the article on VO https://topwar.ru/125527-manevr-manevr-podavay.html 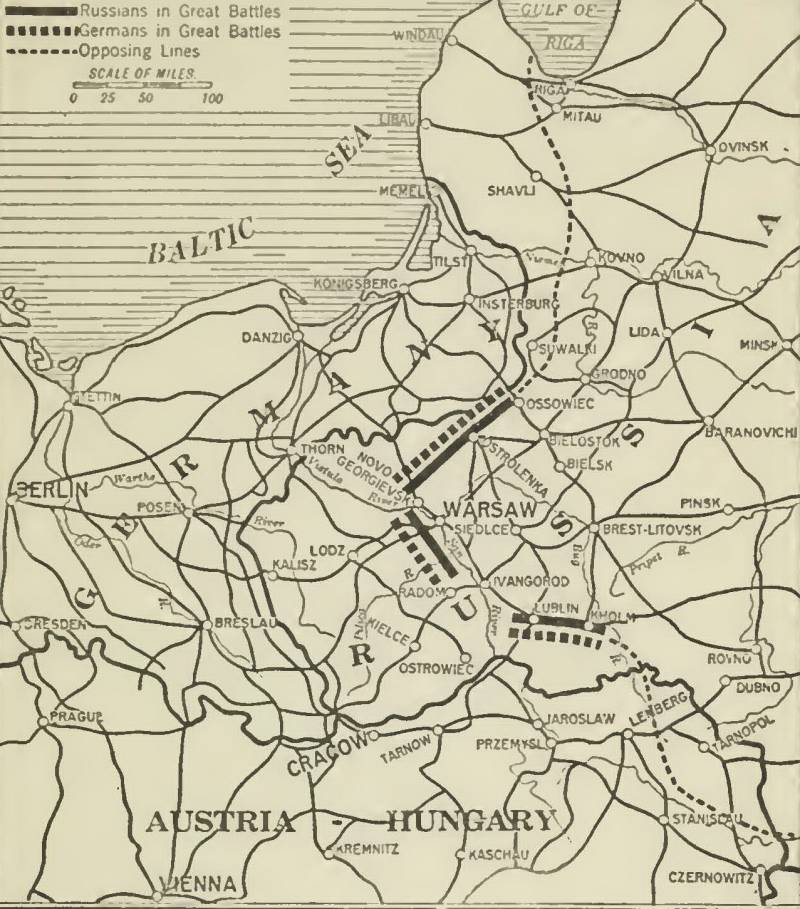 Abandoning the “Polish Balcony” and retreating to the new frontiers in the summer and autumn of 1915, what is this: a strategic failure or leveling of the front?

We had a chance to get acquainted with a very interesting article by Lieutenant-General of the Russian Army Vyacheslav Borisov under the title "The Strategy of Extensive Theaters". The article, in which the military specialist offers his vision of the strategy on the Russian front of the First World War, was published in the journal "War and Peace", published in Berlin (1924 G.N. 16. C. 11 - 19). 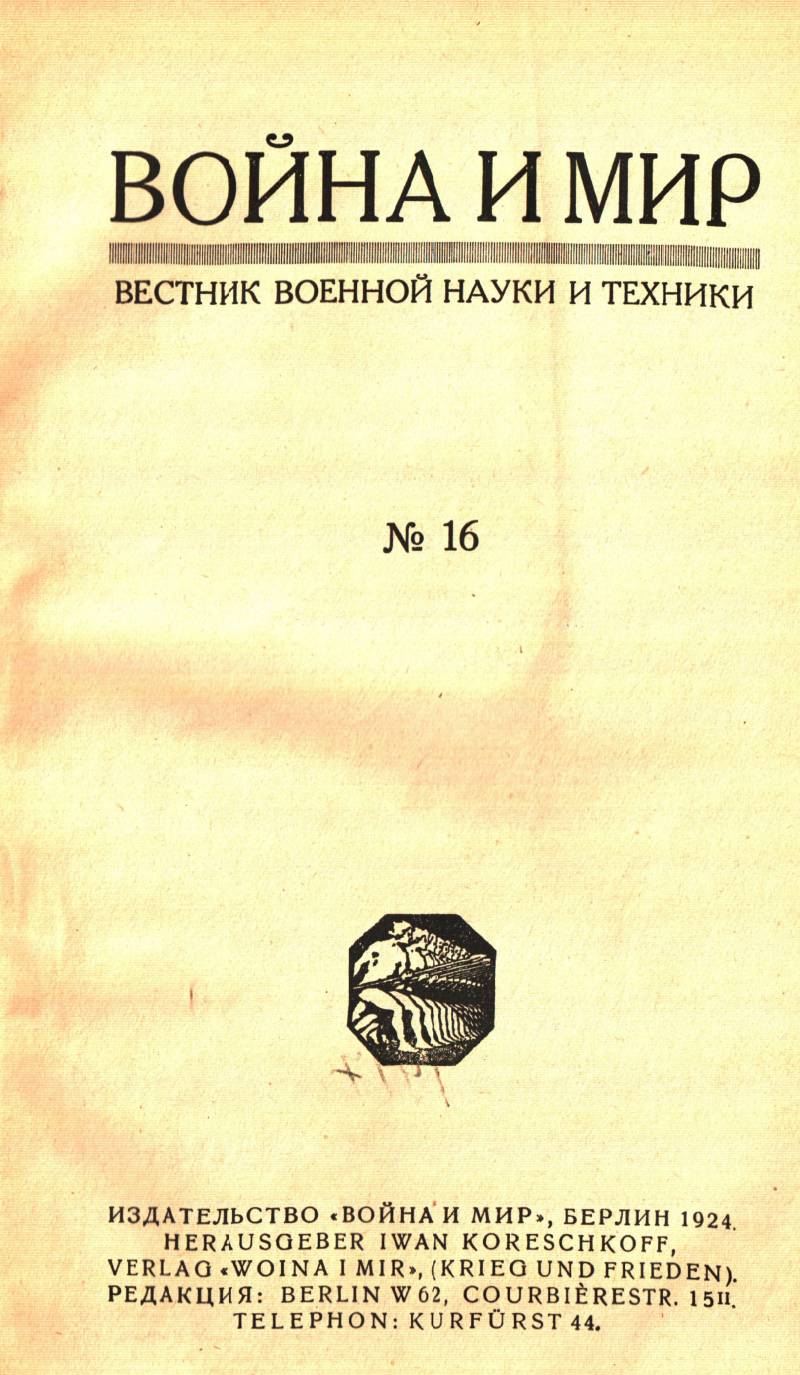 Il 3. Magazine cover, in which the article of V.E. Borisov is published.

Analyzing the pre-war strategic planning of the Russian Empire, V.E. Borisov notes that in 1914, the Russian and French general staff relied on the conclusions of the German military doctrine, and in 1914, “we were not guided by the strategy for our own, Russian theater: we deployed the army as if they intended to quickly go through Belgium, although the German march, in space, was no longer than Samsonovsky from Lomza to Tannenberg. The Germans went to the decisive point of their theater, and we, having made the same leap as the Germans, found ourselves at the bottom of our wide ditch. ” [WITH. 11].

Describing the Russian strategy in the initial period of the war, the general writes: “Our strategy, at least for the main mass of our forces (18 corps of 25), i.e. for the south-western front of the gene. Alekseev, should be divided into two periods: before 21 / 8 September 1914 and after. On this day, we finally and categorically learned about the lack of artillery shells in our country ... In the first period, before 21 / 8 in September, 1914 g ... we, believing in the power of firearms weapons, in the possibility of its full use (cartridges in abundance), having a wealth of experience of the Japanese-Russian war, and taking advantage of the features of its vast theater, could do a lot ...
... the first period of the war, we started on foreign models. On all fronts, we sought an unrestrained offensive, forgetting about the strength and benefits of defense. Why not let the Austrians break about her? We forgot about the vastness of our theater, allowing us not to be particularly embarrassed by the distance in 500 kilometers.
... in the end result, 11 strong enclosures went to a narrow front in 60 km (Zholkiev-Mykolaev). Already 30 / 17 August 1914 g., With the inclusion in the South-Western Front Guard and XVIII Corps, gene. Alekseev considered our main attack in the direction of Lublin - the mouth of the Sana River secured success, and transferred the front headquarters to Lukov. At the same time (but later realized 6 Sep / 24 Aug.) It was decided to transfer part of the forces to the left bank of the Vistula to move them to the side of Krakow-Breslavl. It was like a glimpse of true strategy in a vast theater. But 21 / 8 September, with the counting of shells with the report of the headquarters of the impossibility of us to give to replenish the loss of 400 marching mouth ... these glimpses of the strategists were suppressed ... " [WITH. 13-15].

In the second period of the strategy, the general notes, they had to relearn themselves under the blows of the enemy. He writes: “Of course, if we, on our territory, made mistakes against the nature of our theater, then the enemy made these mistakes more often. On our front, he acted as on his own, narrow and not deep. In the battle of Lodz, in November 1914, Ludendorff initially correctly marked a mass strike on our excessively long and inflexible front. But the strategy of the deep theater demanded a greater penetration depth, to Warsaw and into it. Then the consequences of the German victory would be great. They also turned more likely to our victory: we restored our front, and only the lack of shells made us stop and then dig in. The same mistake was made by the Germans in a battle in the August forest (February 1915) ... ”[S. 15-16].

What would happen if the Naroch operation succeeded in March 1916? - asks V.E. Borisov. The need for an offensive "over exhausted terrain, with finally destroyed communication routes that are unrecoverable due to lack of material resources; then to stand on the new front, having in front of itself a well-equipped railways B. Prussia, whence the Germans, having brought up troops from Belgium, could always suddenly strike at us; in the rear we would have a complete ruin. In addition, the transfer of a fortified line to a new place would cause us enormous material costs. And what would we win in a strategic sense? Nothing but a strip of terrain in 300 km deep. With an operation in France, this would mean that the Germans were cleansing not only French, but also Belgian territory, but nothing for us. ” [WITH. 17-18].

The author quite rightly concludes that the main goal of the attack was: “What was then the real goal of the Postavy strike? ... attach the Germans to our front and distract them from the French " [WITH. 18].

V.E. Borisov formulates extremely interesting conclusions concerning the strategy of vast theaters - that is, the strategy preferred for use on the Russian front:
“I. The vastness of the theater allows for strategic deployment into the depths of the country (our plan for 1908) and to begin operations when the enemy’s intention is fully clarified.
Ii. If ... the French theater allowed for greater flexibility in the transportation plan for concentration, then our theater allows it to an even greater degree.
Iii. Extensive theater, subject to an accurate study of its network of railways and the network currently at the disposal of the enemy, allows for such regroupings of forces by railways that are very risky for a small theater.
Iv. It allows, with the defense, to keep only the main operational directions (plan 1812 g. And Alekseev on 1917 g.).
V. Allows you to let the enemy inland until they deplete their offensive force (Napoleon in 1812, the Germans in 1915).
Vi. The conversion of the country before its front into the desert (Ludendorff in 1914 during the retreat from the Vistula to Silesia; the Alberich plan of Ludendorff in 1917) is fully applicable.
VII. Difficulty for the enemy, even with victories, to achieve a solution: the depth of the theater does not create a crisis for the defeated (Ludendorff speaks about this a little after each victory on the Russian front).
Viii. Breakthroughs (Sventsyany - Deep in September 1915), detours, coverage only get local meaning.
Ix. The air force, as an extraordinarily facilitating reconnaissance, the destruction of rare, and therefore very vital centers, receive great importance.
X. Huge distances create an exceptional value in car application. ” [WITH. 19].

General V.Ye. Borisov was convinced that the main strategy that Russia should have been guided by in all wars is its natural “Strategy of vast theaters”. So maybe he is right?

Ctrl Enter
Noticed a mistake Highlight text and press. Ctrl + Enter
We are
The action “Military service under the contract is your choice!” In Rostov-on-Don: future contract servicemen, exhibitions and “Russian Knights”Reports from the militia of New Russia for 2 September 2014 of the year
27 comments
Information
Dear reader, to leave comments on the publication, you must to register.