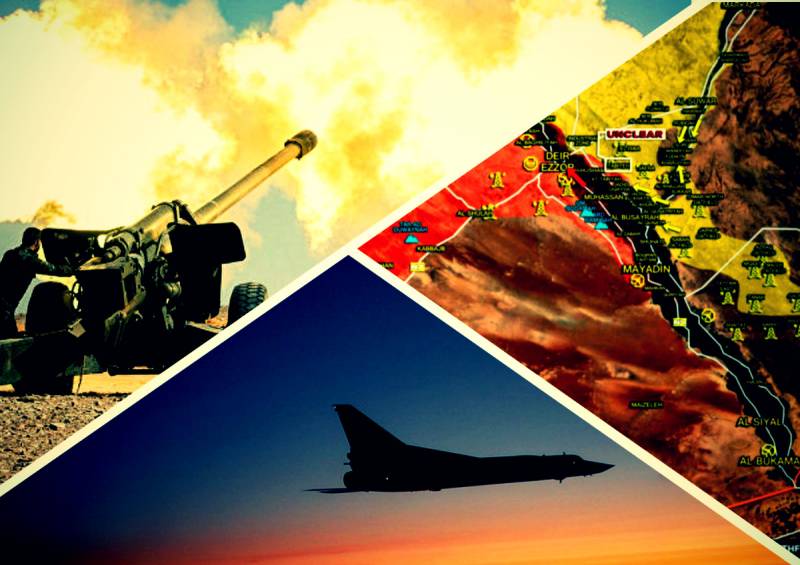 Every day, the horizon of a global military-political junction at several local and regional theaters of operations is clearly visible, where the interests of the “Western axis” with its imperial ways and the Russian Federation, which on well-justified grounds of a superpower with sound strategic ambitions, clash states and peoples from the comprehensive absorption of an anti-Russian militarization ideology that carries blood and grief and destruction, regardless of whether What kind of dressing ”is the“ democratization ”of the new victim country? Undoubtedly, Donbass and South Ukraine can be considered the most “explosive” and unpredictable pre-escalation conditional TVDs, where Kiev, on the orders of the “big uncles” from the Pentagon and dragging Volcker, is preparing to launch another act of military aggression against the LDNR and subversive activities in the Republic of Crimea.

Indicators of such a gloomy development of events are the sabotage committed by 31 of October against the nodes of electricity and gas supply in the settlements in the vicinity of Alushta, as well as a multiple increase in the number of shelling of Donetsk and Luhansk People's Republics. Obviously, these events are only the harbinger of the chaos that will erupt immediately on the eve of the presidential company 2018. It is during this period that the West will make numerous attempts to maximize the operational and strategic situation in the Donbas, in Transnistria and directly in Russia itself; and our main task is active proactive actions, which we will discuss in the following analytical reviews. Today we will return to the final phase of the Syrian company, where in the coming days there will be a fierce clash for the extreme southern Syrian stronghold of ISIL - the strategically important city of Abu Kemal.

Over the past two weeks, constantly updated information on the operational situation on the distant approaches to the city of Abu Kemal has not left the first positions for a second. news feeds of the most famous Russian, American and European news TV channels, as well as with enviable consistency appeared in the news sections of hundreds of military analytical publications. Such a lively interest in this area is not accidental. Immediately after the operational crossing of the Euphrates with access to its eastern bank in the Deir ez-Zor region, which was accompanied by fierce fire resistance from the IS and Kurdish YPG / YPJ units, as well as the liberation of a significant part of the city from pseudo-caliphate formations, the command of the Syrian Arab Army and the command the Russian group of forces in the SAR began to develop an offensive operation in the southern operational direction. At the same time, in connection with the probable difficulties of supplying the offensive "backbone" of the CAA with fuel, spare parts, provisions and fuels and lubricants by means of ground transport, it was decided to conduct an offensive "throw" along the western bank of the Euphrates River (on the eastern bank of the Euphrates, the CAA established limited control only on a small area territory around Deir ez-Zor).

During the offensive operation of the CAA assault units under the command of General Hassan Suheil, by October 15 and 2017, Meyadin and his environs were quickly and successfully liberated, and the southward attack continued. Moreover, the island of Saqr, on the r. Euphrates At this time, the “Syrian Democratic Forces” (SDF), represented mainly by Kurdish self-defense units, did not waste time in vain, and with the support of the Special Operations Forces and the USMC, which have direct channels of communication with ISIL, almost without resistance from the terrorists were able to take control of Al-Omar, the largest oil field in the republic, after which the SDS grouping continued the march towards the cities of Haraij and Khadzhin.

While the Kurdish units that had agreed with the terrorists had the opportunity to overcome several kilometers a day, the Syrian army units on the west bank of the Euphrates were literally bogged down in battles with the IG, the main fortifications of which are currently concentrated in a dense network of settlements around the cities of Al-Quray (Dar An-Nasrani, Wadi al-Havr and Al-Asharah). As a result, we have a not very pleasant operational tactical picture, where full forces and Washington-supported SDFs (in terms of an offensive on the southern IT) were able to outpace the exhausted CAA units by about 25 - 35 km. To see the fact of the arrangements between the SDF / US and ISIS is quite easy: you just need to look at the regularly updated maps of the Syrian theater of operations on the syria.liveuamap.com resource on October 24 and November November 1. Here you can see that in just a week the Kurds passed about 40 km, while the CAA did not pass and 10 - 15 km.

Also, 24 in October, 2017, the CAA units resumed offensive operations from Humaim in the eastern direction, thereby making the Western coalition understand that the CAA had a new strategic goal - the Syrian border town of Abu Kemal. After just 4 of the day, October 28, an international coalition led by the United States decided to act in advance. Ofpred coalition Colonel Ryan Dillon immediately announced an active offensive operation on the same city. It was from this moment that the active “race” began to establish control over Abu Kemal. The main official argument of the Americans and the SDF regarding the start of the operation was the presence in the southern city of the last and most important command and staff unit of the pseudo-caliphate in the SAR, the Syrian Arab Army is guided by a similar fact. Nevertheless, the real goals of establishing control over this city are much deeper. It is the party that will be the first to enter Abu Kemal that will later be able to more confidently dictate its conditions during the further redistribution of the republic’s territory. What is this about?

It would seem that the Al-Omar Kurds and the Americans skillfully and practically without loss received their own “juicy piece of tenderloin” in the form of an oil field. What they may need in Abu Kemal. We look at the map. The city is located on the west bank of the Euphrates River (on the territory controlled by the largest ISIS bridgehead currently, stretching from the banks of the Euphrates to the eastern part of the province of Homs). Currently, the SDF have many times more opportunities to advance the Syrian army in the attack on Abu Kemal (all the same channels of agreements between the US and the IG will be used). As long as the last strongholds of the resistance of the pseudochaliphate bought by the Americans restrain the CAA in the Al-Asharah region and east of Humaim, the Kurds with the Americans can force the Euphrates and take Abu Kemal without a fight. After that, the SDF / USA will have at its disposal vast territories of the Deir-ez-Zor and Homs provinces up to the eastern approaches to the city of Es-Sukhne. Here, the States can go on the usual tactical trick: by bribing and providing a calm life to the command link of the IS, to engage the terrorists in “punching up” the tactical “corridor” from Es-Sukhne in the direction of the territory controlled by the American KMP around At-Tanf military base.

Strange as it may sound, but having received all the necessary anti-tank and artillery weapons from the US, the terrorists, with possible Kurdish support, will only have to penetrate the 55-kilometer “corridor” in the south-western direction. After this, Washington can, with a calm conscience, “chop off” all the southern regions of the Syrian Arab Republic, including the Syrian-Jordanian and Syrian-Iraqi sections of the border. The fact is that the advanced assault units of the Syrian army and Hezbollah are currently concentrated south of Meyadin and in the area of ​​the settlement of Bactal, from where the capture into the tactical "ticks" of Abu Kemal takes place, while the sector of the front line in Es-Sukhne is not saturated with the proper number of defensive strongholds, which in the end can lead to a “breakthrough”.

To prevent the above scenario from becoming a reality, from yesterday, long-range Tu-22M3 long-range bombers escorted by super-maneuverable multi-purpose Su-30SM fighter planes, as well as 3M14K Caliber strategic cruise missiles launched 533 began to be actively used against ISIL fortifications north and west of Abu Kemal. mm torpedo tubes of a diesel-electric submarine B-268 "Veliky Novgorod" (pr. 636.3 "Varshavyanka"), which is in service with the Black Sea fleet. The importance of taking Abu Kemal can be clearly seen in the incredibly rapid change in the tactical situation both in the Baktal region and near Al-Asharah, where everything finally got off the ground thanks to the brilliant operation developed by General Suheil to oust the militants from the Euphrates; such speed was not observed even during the assault on Deir ez-Zor.

Ctrl Enter
Noticed a mistake Highlight text and press. Ctrl + Enter
We are
Russia and LDNR are driven into a hopeless situation! The first fruits of the “Belgrade meeting” and praises of “special status”Syria: Americans scare themselves, and Asma Asad buys chairs
49 comments
Information
Dear reader, to leave comments on the publication, you must to register.