War without rules: Poroshenko against Washington 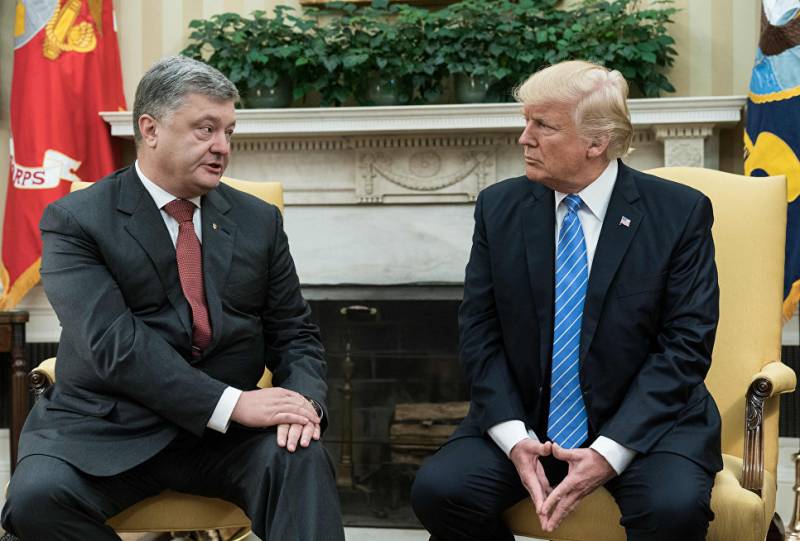 Today we see how former allies, and now sworn "friends", Poroshenko's Kiev regime and Washington clashed in a desperate fight for control of Ukraine. Many will wonder how so? After all, Donald Trump and Petro Poroshenko, meet and embrace and swear to eternal friendship. But so often in politics. Trump and Putin, too, embrace and talk about friendship, and yet, this does not stop them wherever they can fight against each other ...

In recent days in Ukraine there have been very important political events, the main meaning of which remained behind the scenes. And that's what happened. Petro Poroshenko decided to destroy the pro-American project "MihoMaydan" by force. And he did it with the full consent of Moscow and the overwhelming majority of local elites. How did it happen that after only three years the Americans need to re-conquer Ukraine?

Ukrainian problems of the USA 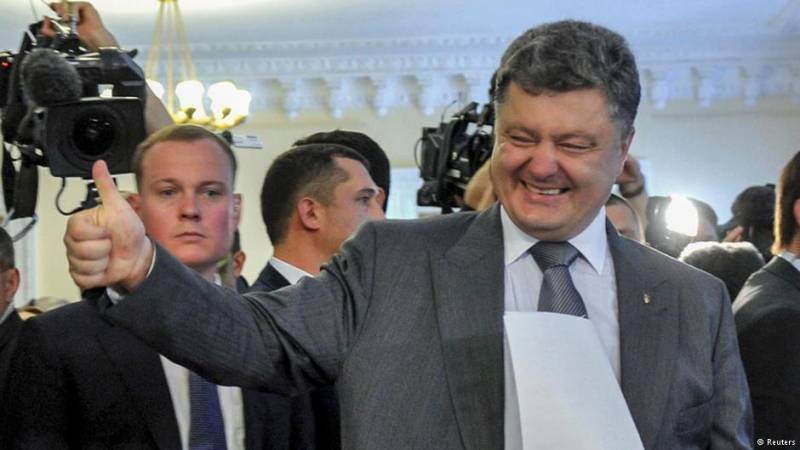 The United States began to lose influence in Ukraine on the second day after the election of the fifth president of this country, that is, 26 in May 2014. As soon as Peter Adekseevich received the coveted mace, he immediately began to revive the regime that had just been demolished by the Maidan. The first and most important obstacle for him was the undivided American domination in Ukraine. Kiev elites are accustomed to parasitize on the contradictions between the great powers. They, in turn, sold their loyalty, now to one or the other, while invariably reserving the right to plunder the territory of Ukraine. As long as the Soviet legacy was large, it was enough for both maintaining the state and stuffing it with the elite of its own pockets. But sooner or later, the legacy of the “damned” regime should have ended and, ironically, this moment coincided with the victory of the next pro-European Maidan.

True, it must be added here that the Maydanovites themselves tried hard to speed up the onset of this event.

So, money in Ukraine has already become lacking for everything, and someone’s appetites should have been reduced. Ukrainian elites offered Western sponsors to uncover wallets and add the necessary amount from there.

Moreover, everyone understood that Kiev lends this money for good.

Americans did not like this situation immediately and they put forward a counter offer that they say "freebies can not be eternal and need to be true patriots", and therefore the Ukrainian elite need to moderate their appetites. At least half.

For representatives of the Novoukrainian power, the concept of “patriotism” somehow did not correspond at all to the concept of “sacrifice”, and therefore the American “brothers”, who just brought the next “most democratic regime” to power, were not understood at the beginning, and then sent.

In turn, the Americans also understood what trap they had landed in Ukraine. On the one hand, it was a pity to quit it, but on the other hand, it was expensive to feed her. And therefore, in the depths of the State Department a cunning plan was invented. Incorporate into the Ukrainian elites the “healthy young forces” that can defeat corruption in the country and lead it to a bright future.

That is, it will be returned to Washington’s full and unconditional control. 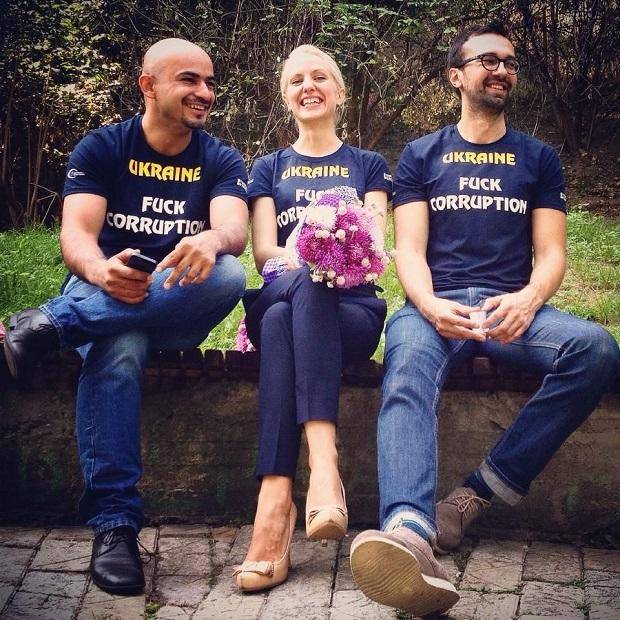 For some strange and one George Soros understandable logic, among these "chosen ones" there were very often his "pupils", such as Mustafa Nayem, Sergey Leshchenko, Sveta Zalischuk and others. And to steer with all this new "Ruh" should proven and reliable loaf Miho Saakashvili.

The Ukrainian elite could not tolerate such encroachment on their sovereign rights. Therefore, the time has come for the great “reformer” Peter I of Ukraine to show who is the boss in the house.

At first, he was able to completely discredit the strongly "patriotic" and much more strongly tied to the Washington "Narodny Front". Just over the year, he “multiplied by zero” his once-high rating, and took away his premier chair. Then, in turn, he began striking the Ukrainian oligarchs (Kolomoisky, Akhmetov, and others). His most important achievement, 2015, was the seizure of control over the General Prosecutor's Office of Ukraine. First, he sat down with his godfather, Viktor Shokin, in the chair of the Prosecutor General, and then replaced him with a drinking companion, Yuriy Lutsenko. At the same time, he slowed down as much as possible the creation by the Americans of the power bodies that were parallel and completely under their control.

By the way, Shoshin’s resignation was used by Poroshenko to completely clean the General Prosecutor’s Office of Ukraine from the remnants of American influence in it. Together with the godfather, the American protégé David Sakvarelidze also left its walls. 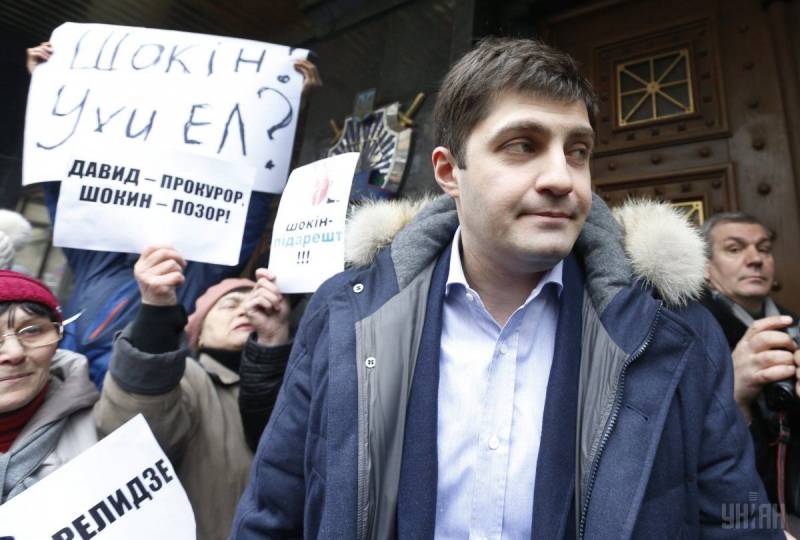 With great difficulty (and providing many billions of dollars) for 2015-16 years, Washington was able to push through the creation in Ukraine of the NABU (National Anti-Corruption Bureau of Ukraine) and SAPU (Special Anti-Corruption Prosecutor's Office of Ukraine). Nevertheless, Petro Poroshenko and his team managed to sabotage their work for more than a year (all competitions for the position could not be held). And he managed to block the creation in Ukraine of the third most important pro-American power unit, the Anti-Corruption Court, without which the first two (NABU and SAPU), in fact, were unable to fulfill their main mission, to become a punishing sword for all anti-American forces in Ukraine. All the cases that lead “Americans” against objectionable to them Ukrainian officials, today are falling apart in the courts controlled by Poroshenko. 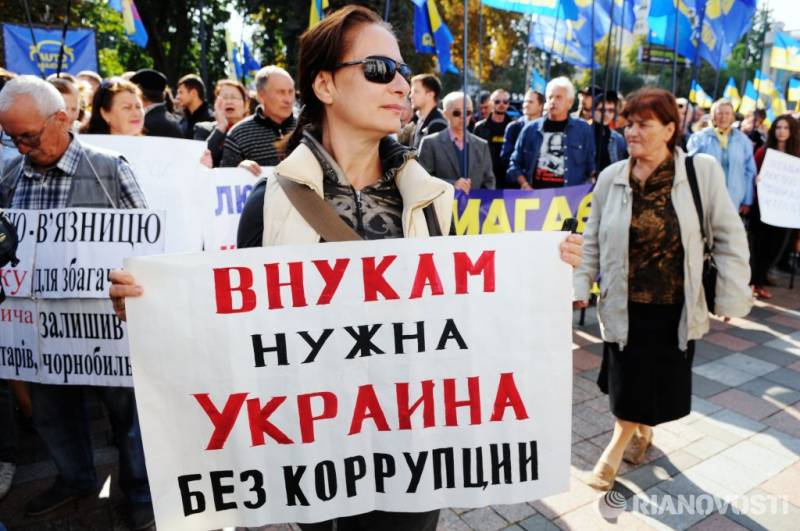 And that is exactly why Maidan Saakashvili marked the creation of a new court as one of the main demands for the authorities, and it was in the form in which the Americans want to see him.

This was the Rubicon, which Poroshenko could not pass. As soon as the United States would get into its own hands the anti-corruption court, any official of Ukraine, including the president, would be completely in their power. Poroshenko’s entire three-year struggle against American influence in the country would have gone down the drain. And then it is time for Vladimir Putin to hook the carp ...

Moscow clearly understood the problems of the Ukrainian elite and were not averse to helping her get rid of the dense guardianship of the United States. Russia understood that the contradictions of interests would sooner or later lead the former allies to confrontation. And we must pay tribute to her, she brought this day as she could. At the same time, already in 2014, it was clear that it would not be the “pro-Russian” opposition of any kind that would fight against the Americans, but the Ukrainian official “pro-American” power that was strong and hungry for money.

At the same time, it was precisely the pro-Western course of the new government in Kiev that was very useful for Moscow, which, after losing 2013-14, required a break and a regrouping of forces.

While President Poroshenko embarked on all grave and completely discredited the Western vector of development of the country in the eyes of the population, Russia was preparing a toolkit that could help it in the future to regain control over Ukraine lost 25 years ago.


At firstit was necessary to deprive Kiev of any possible economic instruments of pressure on Moscow in the future. Already by 2020, this stage with the construction of bypass gas pipelines will be completed, and the sanctions that have been in effect by this point will allow Russia to rebuild Russia's trade flows for several years, so that Ukraine, even if it really wants, will not be able to influence the Russian economy.

Secondly, it was necessary to prepare a platform for over-pulling the Ukrainian elites to their side. That is, to create for them a spare airfield, where she will be able to shelter the honestly stolen from the revenge of the Americans.

Washington can at any time not only start a prosecution against any Ukrainian official abroad, but also take it to the bottom, as it was once shown to all dull “Ukrainians” using the example of former Prime Minister of Ukraine Pavel Lazarenko.

And such an airfield is almost created in China, and by 2020, Ukrainian officials and businessmen will have a choice that many will not fail to take advantage of.

In order to have time to prepare all this, it was necessary to provide official Kiev with resources so that the Kiev regime suddenly did not collapse ahead of time and thereby spoil the whole combination. Many have already forgotten, but Moscow, to the surprise of many of its fellow citizens at that time, provided Kiev with gas in 2014. And, in fact, for free. It was Putin who supplied Poroshenko’s regime with coal from 2015 of the year (and so far). 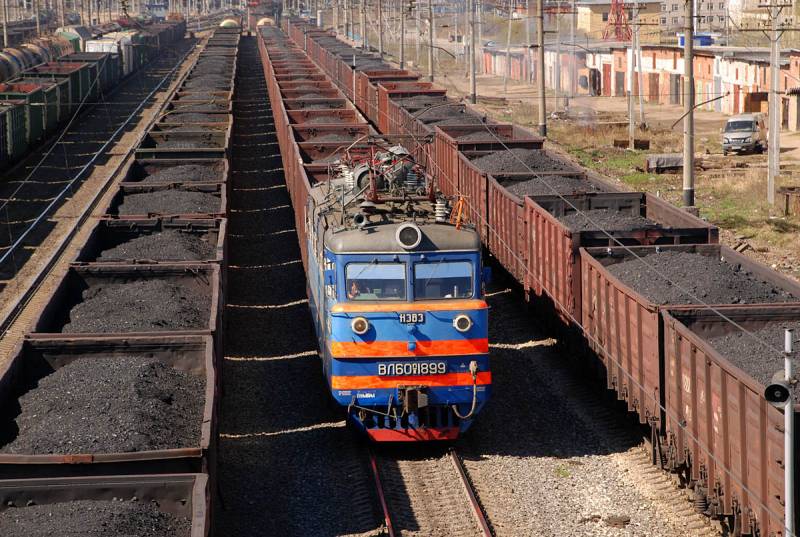 It was Russia that pumped more than 2 billion dollars in 2016 into the weakened economy of Ukraine. Moscow provided the, gave se. The same scarce Russian freight cars in Ukraine, before 2017, more than a quarter of the entire fleet ran.

Washington saw it all, but could do almost nothing. By the end of 2015, Barack Obama had become a “lame duck” at his home, and his main goal was to ensure the transfer of power to Hillary Clinton. The topic of Ukraine in the American agenda, one of the most important, at first became simply important, and then third-rate. And the internal political bedlam, which began in the United States after the elections in November 2016, became for Moscow just a gift of fate. By the time, like Donald Trump's hands reached Ukraine (summer 2017 of the year), the situation on its territory has changed dramatically. Official Kiev, despite the ongoing Russophobic rhetoric, was completely Moscow “under the thumb.”

Yes, for only one law “on education”, Petro Poroshenko should be given the title of Hero of Russia. This document resulted in the creation of a real western front against Kiev, which today hampers it much more than all the VSN corps combined.

Why did the Americans staged "MihoMaydan"

So, by the time Donald Trump was able to start solving the Ukrainian problem, a lot was missed for the Americans. From the former 100% control over Kiev there were only memories. Russia was almost ready to return to Ukraine, and the US lost most of its tools, which previously allowed them to control any Ukrainian regime.

Also, by the summer of 2017, it became clear that Petro Poroshenko, who had sharply strengthened over three years, was not going to give power for good (still). 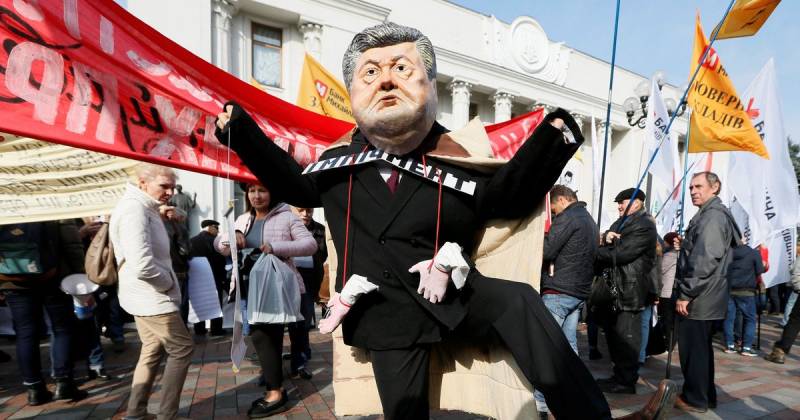 Mikhail Saakashvili’s return to Ukraine and an attempt to sway the Kiev regime is essentially a game for all-Americans. Attempting to seize the initiative from once their "bitch sons."

So, the clash between the Ukrainian "pro-Americans" and the regime of Petro Poroshenko was inevitable. All the logic of the events of recent years led them to him. Washington needs, by all means, to shake the throne of Petro Poroshenko, and they try as best they can. Today, the struggle has escalated to the extent that the United States went to the outright twisting of the hands of Ukrainian officials. The arrest of the son of Interior Minister Arsen Avakov, this is a warning to his father to stop and think again, and the terrorist acts in the Crimea, so untimely for Kiev, are very similar to the provocation of Washington.

We continue to follow the situation in Ukraine. It is already obvious that the time of relative calm in its territory has passed. There are two very awkward years ahead of us, after which events can turn around just at amazing speed and in a completely unexpected direction.

Ctrl Enter
Noticed a mistake Highlight text and press. Ctrl + Enter
We are
Situational analysis of the death of the MH17 flight (Malaysian Boeing 777), made on the basis of engineering analysis from 15.08.2014Results of the week. "God forbid to see Russian revolt, senseless and merciless!"
29 comments
Information
Dear reader, to leave comments on the publication, you must to register.