It's time to be baptized until thunder. About the Russian-Ukrainian border

November 2 2017
140
I wonder how much we will pretend that all people are brothers? How many we will come up with versions of technological accidents and manifestations of the aggressiveness of individuals? The people are good, the state is bad. People are not guilty that they have such a state. We are Russian. We have to love everyone. We should be the last to share. Even when we are thrown into the muck of shit and watered our homeland. 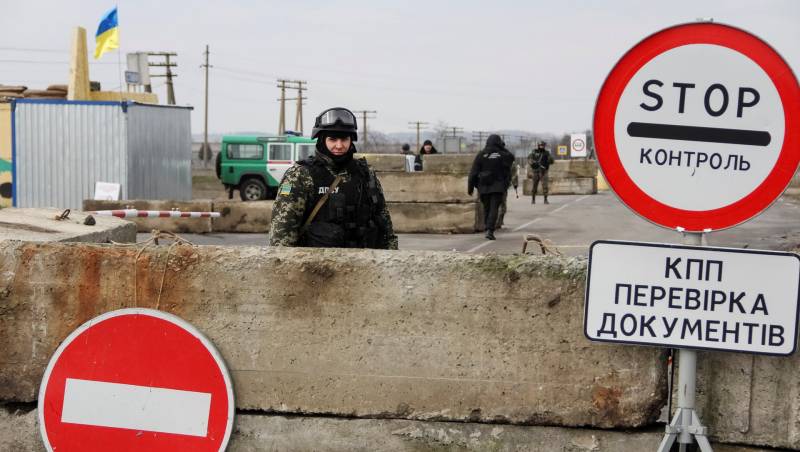 The topic of this article has been brewing for a long time. Like a boil. Moreover, our understanding of the Ukrainian processes is somewhat more thoughtful and benevolent than that of the majority of Russians. For many reasons.

So, Crimea was subjected to a terrorist attack. Whatever our official bodies say and write about, the facts speak precisely about this. Gas pipelines, power transmission towers ... Familiar handwriting? Isn't it true, we once wrote about this? And also in the area. According to the logic, we will wait for the next “accident” at any water supply station. We also wrote about the channel ...

We will not analyze these "accidents" today. Most of the readers have already studied this topic for a long time, as well as they almost studied the causes of these “accidents”. Fortunately, the Internet provides such an opportunity for the rapid dissemination of information that it becomes difficult to hide something. Even the special services.

Today we are about something else. Could the specialists really stand up to the terrorists in Crimea? Yes, and in other border areas of Russia? And maybe not in the border ...

Those who have ever been on the Russian-Ukrainian border, understand perfectly what is at stake. Look at the obvious. On the same spit in the face. Compare how Ukrainians go to the “aggressor country” and how Russians do it.

Have you ever seen a Ukrainian international passport on the border? Did not see? Right. For Ukrainians, Russia is not abroad. And try to go to Ukraine with a civil passport ...

It is clear that now some particularly good readers will begin to exaggerate the topic of border areas. There are supposedly treaties ... Well, hereinafter referred to. And there will be about mercy and "people are not guilty."

We agree. And the Russians in the Crimea to blame? Or does mercy not already apply to them? But the thing is that the rules of passage with a civil passport apply to all Ukrainians. Regardless of the place of residence.

How is the Ukrainian Russian border? "Hello. Where are you going? - To relatives in ..."

Then you can call any city, any street. Anyway, no one will check. Our border guards do not have such a base. Yes, and the task of monitoring who entered them no one puts. The simplest procedure.

And what happens when the Russians cross the border? At first glance, about the same. With the exception of a mandatory passport. But in fact? But in fact, in any computer border guards connected database "Peacemaker", "200 Cargo" and "Terrorist."

The very bases about the illegality of which everyone has been talking for so long and persistently. And we, and Europeans, and Americans.

Who does not know, the “Separator” system is already working, when you can compare a person's photo with the “Peacekeeper” base right from the phone.

The dog barks, the wind blows, and the caravan moves on. The bases are! And work. See the Ukrainian media. There periodically "float" messages about the detention of "separatists" who fought in the Donbas. Do you think this is a good job SBU? A person who may not be related to the republics, was there for some personal matters, but through the efforts of Svidomo fell into one of these bases, the SBU was under arrest and hard pressure.

Do you think that many will not break and do not confess all mortal sins? You know, in Ukraine, even a new type of business has appeared. “Redeem yourself from the Peacemaker database. The prices are still divine. From a thousand dollars.

But back to the Crimean terrorist attacks.

With the control system on the border, which I wrote about above, is it possible for specialists to really control the coming Ukrainians? Do not prohibit entry, but to control? Any schoolchild knows that the work of the security agencies depends largely on intelligence. From contact with local people. From those who are embedded in supervised organizations and groups. Alas...

But what do we have today? We have a situation where the management of these organizations and groups is carried out directly. No complicated schemes for the delivery of directives and setting tasks. No complicated delivery schemes weapons and ammunition. No need even scouts and saboteurs send. It is enough to send instructors who, under the brand of rest in the Crimea, calmly “drag up” a terrorist for one operation.

In the intelligence of Ukraine work "Soviet" intelligence. Those who studied in Soviet universities, mastered the specialty by the Soviet methods and perfectly understand the specifics of the work. They know not only how to organize the operation, but also how to leave after the act. Moreover, they have long been "kept on a leash" by extremists. The leash is different, from money to relatives in Ukraine, but it is there. And the option "we will take you to the Ukrainian territory" works.

The idea that was voiced by our border guards on the construction of a “wall” on the border with Ukraine should be implemented as soon as possible. I knowingly took the word wall in quotes. By this term, I mean equipping the border with the most modern and best technical means. There are such means and opportunities. I do not know about the mouse, but the hare or some hog can be seen clearly.

So maybe it's time to "respond mirror"? On the border? Having brought for the sake of security the joy of the citizens of Ukraine?

By the way, for those who pity the poor Ukrainians, who are forced to go to Russia for the last money to go shopping or for part-time work.

See Ukrainian railway tickets purchase sites. Prices for these same tickets for travel around the country. And for those who looked, I will give additional information. Travel by minibus from Kharkov to the nearest checkpoint costs 85 hryvnia. A reserved seat from Kiev to Kharkov - 150. So the poor do not ride to us on an ongoing basis.

Maybe we can become a foreign country for Ukrainians? And start with a passport. Even to invent nothing. Mirror response to the actions of the Ukrainian government. Can establish databases on participants of anti-terrorist operation, members of extremist organizations, the Ukrainian nationalists? Why is this still not done?

If now someone tells me that such work is underway, I would advise you to watch any Ukrainian social network. Even those who participated in the events in Odessa, quietly come to Moscow, St. Petersburg, to any city in Russia. And the photo spread. Not to mention the participants of the ATO from the punitive battalions.

The fact that today there are a lot of Ukrainian refugees in Russian cities is a fact. As a fact, the fact that for some reason the majority of these refugees do not really rush to work in factories. There is no queue of Ukrainian specialists in front of the gates of these enterprises. But for some money they live. The body must be fed, watered, clothed, shoes. Yes, and you have to pay for the apartment. Maybe it's worth checking the income of these refugees?

It is clear that for the majority of those whom Russia has sheltered, such measures are offensive. These are normal people who, for various reasons, were forced to leave home and leave. This is a difficult step.

But, if you are really a refugee, if you really want to just live, raise children, work, then go ahead. Three years ago, Russia proved that it is merciful and kind. But those "who carries his stone in his bosom" we must catch. I think the Ukrainians will understand the need for this step.

The situation on the Russian-Ukrainian border, let's say, raises concerns. Terrorist attacks in Crimea is a warning. Panic is not worth it. But to pretend that we are deeply on the drum the situation, stupid. Today at stake is the lives of Russians.

Who will guarantee that tomorrow, with the same “accident”, one of the employees or just passers-by will not die? Or are we going to act again according to the old Russian proverb? "Until the thunder clap, the peasant does not cross himself"? It's time to be baptized before the onset of thunderstorms.

And the Ukrainians, if anything, will understand and appreciate. How we understand their current problems. And this will be the best evidence of fraternal relations. Well, who does not understand - so there are a lot of proverbs about how a horse will feel if someone is thrown out of a cart.

Ctrl Enter
Noticed a mistake Highlight text and press. Ctrl + Enter
We are
Situational analysis of the death of the MH17 flight (Malaysian Boeing 777), made on the basis of engineering analysis from 15.08.2014Results of the week. “In our cooperative, the board is always agreed”
140 comments
Information
Dear reader, to leave comments on the publication, you must to register.