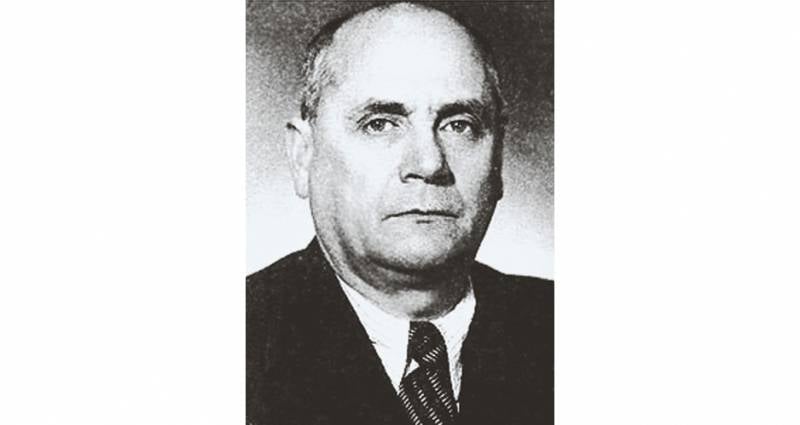 He met the Great Patriotic War, already being the national commissioner for construction. Less than ten days after the start of the war, the State Defense Committee received a letter from Ginsburg, in which he sought the consent of the State Defense Committee to create on the basis of existing trusts and other organizations special building and assembly parts - OSMCH, which would be entrusted with the implementation of urgent government tasks the deployment of evacuated factories, the construction of new enterprises and defensive lines, as well as the forced restoration of war-affected facilities. “Being highly mobile organizations by nature, the OSMCH could be relocated from one construction site to another, as needed,” Ginzburg emphasized. “All their activities should be based on strict military discipline and efficiency.” The GKO members unanimously supported the People's Commissar.

If we take the network of construction and installation organizations as 100 percent, then it turns out that since 8 July 1941, less than one tenth of the enterprises in the industry were outside the Ginzburg subordinates. The main role in ensuring the functioning of the military-industrial complex of the USSR was played by about a hundred OSMCH. Each consisted of about four thousand builders and installers who possessed the required skills and abilities. Of course, no matter how qualified they are, it is impossible to completely exclude the inclusion of workers' battalions in the TROE. This happened more than once or twice, but still rarely enough.

The first direction in which the DEMO was noted, is the movement of the productive forces of giant in quantitative parameters. The entire cycle consistently included the dismantling of the plant, the installation of the necessary equipment at the final evacuation point and the turnkey delivery of the object in order to start working immediately. The second direction is the construction of new facilities in the rear zone. The third is the return to life of all that was destroyed by the war.

The People’s Commissariat led by Ginzburg was in the Urals. And this is no coincidence. In the rivalry of the military-industrial complex, the decisive word was for the Soviet Urals and the German Ruhr. And the People's Commissar did everything to defeat the Urals. What installers and builders subordinate to Ginzburg did there, even for experienced specialists it seemed fantastic. So, in just two and a half months, the Chebarkul Metallurgical Plant was built. The basic equipment used was the Elektrostal plant, evacuated from the city of the same name. With the launch of the plant, an end was put to the catastrophic lack of stampings of crankshafts and connecting rods for the needs of the military aviation.

A truly great event was the appearance on the industrial map of the Urals of the Chelyabinsk Pipe Rolling Plant. And here the period from the beginning of construction to the delivery of the most important in-plant facilities was several times shorter compared to world practice. But this is an open-hearth shop, two tube rolling mills, one more for the production of pump-compressor pipes ... It is shaken by the indicator of average monthly productivity per worker. It was equal to 12 tons of designs. In today's Russia - three times less.

Under the close supervision of the People's Commissar, blast furnace No. 5 was built at the Magnitogorsk Iron and Steel Works (MMK). The works were completed at the height of the offensive phase of the Battle of Stalingrad. With the beginning of a radical change in the war, MMK declared itself as one of the main suppliers of armored steel for the needs of the Red Army, making an integral part of the production process sheet rolling.

Builders needed a little more than six months for a blast furnace No. 2 bis to appear at the Chusovsky Metallurgical Plant (ChMZ), which allowed three-fold increase in pig iron smelting. With ChMZ straight to tank factories supplied quality armor plate. Thanks to the dedicated work of the builders, the production areas quickly expanded, which allowed expanding the assortment. A fundamentally new product contributed to the reliable operation of barrelless field rocket artillery systems, increasing the effectiveness of anti-tank guns.


The Commissar’s hand was felt not only in the Urals, but throughout the whole country. He confirmed the reputation of an outstanding leader and where the front was at hand. For example, the question of supplying fuel to Leningrad was acute. Transportation of fuel in the usual way was virtually eliminated, and an unprecedented decision was made - to lay a gas pipeline along the bottom of Lake Ladoga. Construction and installation work took only 50 days.

Even before the radical change in the course of the Great Patriotic War, the People's Commissar could record re-evacuation, restoration of a number of the most important objects that were part of the national-economic complex. The most significant were the mines of the Moscow coal basin, the Stupino Metallurgical Plant, the Elektrostal Heavy Machine Building Plant. This period is marked primarily by the success in the restoration of facilities in Stalingrad. Then Ginzburg successfully solved the tasks of reconstruction of the Gorky Automobile Plant, a group of Yaroslavl enterprises of the rubber and rubber industry.

After the Battle of Kursk, the People's Commissar promptly resolves issues in the Ukrainian direction. Before the war, there was the backbone of the industrial enterprises of the USSR Commissariat of Construction, and Ginzburg is trying to get the same enterprises to work at full capacity as soon as possible. Commissar in the thick of things. And he heads not from Moscow, but from the capital of Donbass, the city of Stalino. Then there was the Zaporozhye industrial site, the Dnieper.

Many years later, Ginzburg recalled: “The war continued, demanding tremendous exertion, but we understood that we had to work on the construction tomorrow. During the years of the Patriotic War, builders performed a large and responsible work. The success was achieved largely due to the fact that we bravely broke with many conservative methods in construction, that the advanced technical thought of our engineering personnel persistently sought and found new solutions that helped us overcome the difficulties of wartime. ”

Semyon Ginzburg was repeatedly involved in the military construction industry after the Great Patriotic War. Especially in 1946 – 1947, when he served as Minister of Construction of the USSR military and naval enterprises.

Ginzburg merits before the Fatherland were highly appreciated by the state. His chest was decorated with the Order of Lenin (five), the October Revolution, the Red Banner of Labor (two), Friendship of Peoples. The recognition of the scientific community was reflected in the election of a full member of the Academy of Construction and Architecture of the USSR. Semyon Zakharovich left 15's life on May 1993 of the year, buried in the Novodevichy cemetery.

Ctrl Enter
Noticed a mistake Highlight text and press. Ctrl + Enter
We are
100 anniversary of the birth of Nobel laureate in physics Vitaly GinzburgDiplomats of the People's Commissariat of Defense: on the eve and during the war
10 comments
Information
Dear reader, to leave comments on the publication, you must to register.