Deportation of naked Germans from Czechoslovakia 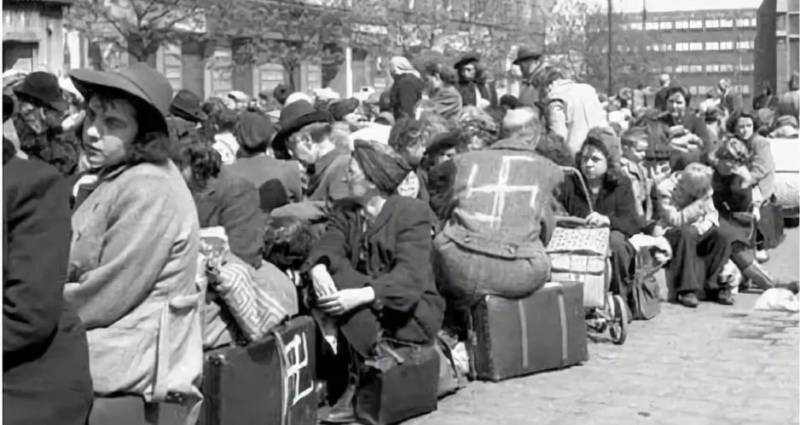 In recent decades, the theme “Soviet soldiers raped one hundred million German women” has become so popular that it is even inconvenient to ask how these Red Army men had enough time and effort with such a tense sexual schedule also to take Berlin. And the description of the Soviet deportations of the forties of the last century has long become a familiar propaganda tool.

One of the most zealous denunciators of deportations in the USSR is the Czechs. At the same time, they very much don’t like to remember how they deported themselves. In the 1938-1939, Czechoslovakia surrendered without a fight was dismembered, the Czech Republic became a protectorate of Bohemia and Moravia. Throughout the Second World War, the Czech people worked hard on making weapons for the nazi army. The Czechs made airplanes, armored vehicles, small arms, ammunition with national thoroughness. No one ever tried to count how many deaths of the Red Army and Western Allies were made by skilled Czech hands.

A small part of the Czechs of military age fought together with the Red Army and the allies, but the overwhelming majority regularly worked for Hitler. Even the British-organized liquidation of Hitler's viceroy Heydrich in 1942 and the subsequent mass executions of the inhabitants of the village of Lidice could not destroy the touching symbiosis of Czech gunsmiths and the Wehrmacht.

And after the defeat of Germany, the Czechs felt like a "victorious people" and engaged in ethnic cleansing - the expulsion of millions of Germans from the territories in which they lived for centuries. Diligence in this matter and a certain Czech “zest” in the technology of ethnic cleansing put the Soviet commanders in the border German cities in a difficult position:

“My commandant's office is located right on the Czech border,” the commandant begins. “Every day I am driven across the border by a crowd of naked people.” I put them in the basement for now. It is impossible that they run like this through the streets, and I don’t have anything to wear them with.

There is laughter in the hall. General Bogdanov asks:
- How is it - naked?
“Very simple,” the commandant replies. - Absolutely naked. In the buff. It's embarrassing to even look.
“I don’t understand anything,” looks at the general with the other members of the presidium. - Explain in more detail. Where do these naked people come from?
The commandant explains: - Germans from Czechoslovakia. Their Czechs undress on the border naked, and then driven in this form to me across the border. They say: "You came here naked, naked and come back." Sudeten Germans. Their Potsdam Treaty resettled in Germany. For the Czechs, this is a joke, but for me it's a problem ...

In the end, a solution was found: as the clothes, the Soviet commandant's offices issued bags of holes for the head to the Germans expelled by the Czechs. Nevertheless, the deported Germans did not become naked ...

A description of naked deportations is not “Soviet propaganda.” In the USSR, it was impossible to recall such tricks of the Czechs. They were brothers in the socialist camp. The fact that such a deportation in the Czechoslovak style, is written in his book “Song of the winner”, a former Soviet officer of the occupying administration in Germany, who ran to the Americans, Gregory Klimov.

Of course, the Czechs stripped naked to victims of ethnic cleansing, not out of love for nudism, but out of traditional frugality.

The medical instructor, Nadezhda Pavlovna Timofte (Osukhovskaya), ending the war in Czechoslovakia, recalled how the Czechs and Germans addressed them on the eve of the deportation: “For example, they trimmed the tracks on the Germans on their heads to distinguish them all at once. In the shops they were served in the span of just an hour. They took them to different jobs. And once I personally saw how Germans were harnessed into a cart instead of horses, and the Czech drove them ... "

Perhaps even naked deportation was not so terrible for the Germans after using them instead of horses. Yet for them ended the period of Czech lawlessness ...

Ctrl Enter
Noticed a mistake Highlight text and press. Ctrl + Enter
We are
America vs England. Part of 11. “Ukraine is the way to the empire”Diplomats of the People's Commissariat of Defense: on the eve and during the war
103 comments
Information
Dear reader, to leave comments on the publication, you must to register.