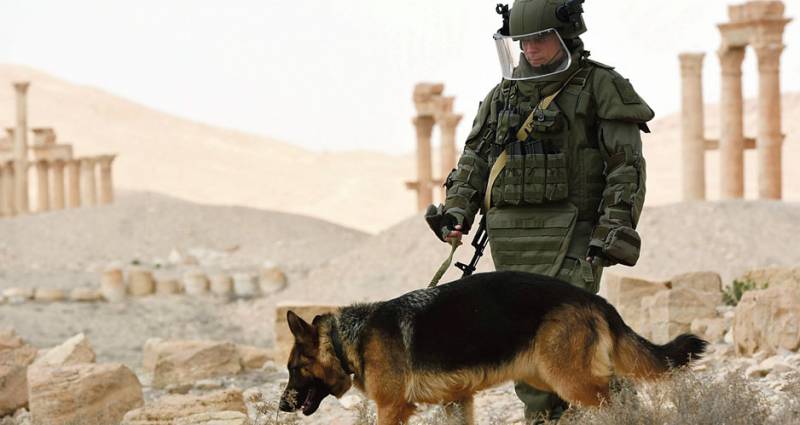 As a result of the bombing of mines in Syria, hundreds of soldiers and civilians were mutilated. The list of losses is growing almost daily. October 18 Major General of the Republican Guard Issam Zahreddin was mortally wounded. His car hit a land mine in the province of Deir ez-Zor. But Russian servicemen and advisers performing military duty in SAR manage to emerge victorious in a mine war.

Their knowledge and skills accumulated not only in Syria, but also in other hot spots, including in the North Caucasus, are unique. At the heart of the Russian school of mine and anti-sabotage combat in combat conditions, extensive experience with explosives, bookmarks and land mines. After all, for each of the "surprises" - the handwriting and methods of a particular action movie, which is identified and immediately recorded in a special card file.

An opened bookmark, a neutralized charge is the result of constant confrontation between the Russian and Western schools of mining and demining. Militants are insidious and cunning in the installation of booby traps. They are trained in military affairs, using the most modern achievements. For example, they put explosive devices in the hulls, which are not detected by mine detectors, or even trained dogs. Therefore, it is not only about the highest professionalism of our engineers, but also about the latest Russian means of mine clearance and protection.
The head of the engineering troops of the Armed Forces of the Russian Federation, Lieutenant-General Yuri Stavitsky states: “In the means of defense, we have stepped far enough and occupy, I think, the leading positions in the world. This was shown by Syria, where we did not suffer mine losses. ”

Many wanted to go through the school of neutralizing explosive objects and countering improvised explosive devices themselves, to see in practice the peculiarities of training specialists in the International Mine Action Center of the Armed Forces of the Russian Federation. Huge interest in the search tools that are used in carrying out tasks for demining, equipment sappers. The guests were convinced that the most important thing is to be able to apply these tools in a comprehensive manner, which greatly increases the efficiency of work.

Take the Syrian Palmyra. The demining squad commanded by Valery Ovdienko, while working in the historical center of the city, not only the newest means of protection, modern systems for searching for explosive objects, but also unmanned aerial vehicles and mobile robotic complexes (RTK) were used to increase safety.

The action of the multifunctional RTK "Uran-6" happened to be seen at the testing ground near Moscow. A self-contained, tracked vehicle is remotely controlled from a safe distance. Even with the undermining of a robot on a serious mine, the operator remains unharmed.
Together with Uran-6, the radar device for subsurface sensing OKO-2 and other means of detecting explosive objects showed themselves well in Syria. But the technique was used in harsh climatic conditions with great intensity.

One of the peculiarities of the conflict in Syria is the set of self-made ammunition and non-recoverable ammunition. Their use by terrorists in crowded places, as well as disguise as household items, even children's toys, create a particular danger primarily to civilians. 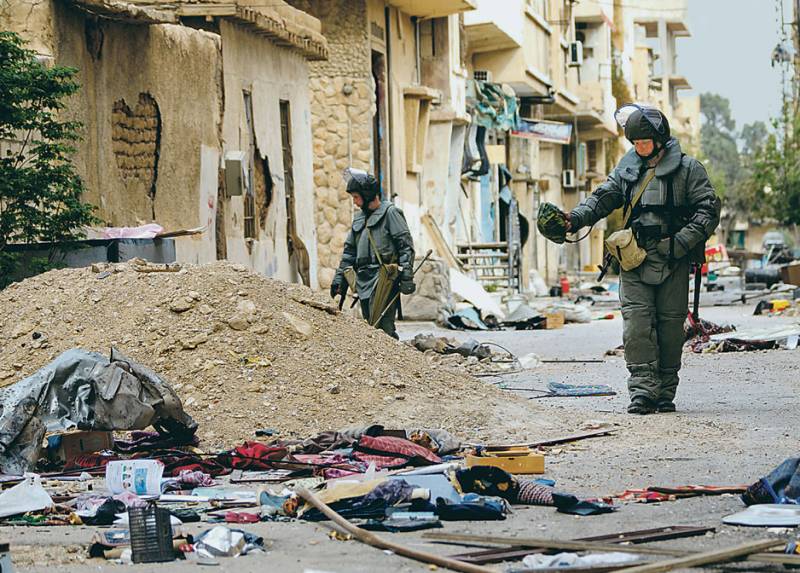 “Specificity is in the widespread industrial production of IEDs, as well as their active use by gangs, in particular, for conducting combat operations in urban environments,” says Igor Mikhailik, head of the International Mine Action Center of the Russian Armed Forces. According to him, a significant part consists of land mines, ammunition based on gas cylinders used as missiles. For equipment used explosives both industrial and homemade production. This creates additional difficulties and danger during detection and neutralization.

A huge amount of ammunition fired from improvised mortars and multiple launch rocket systems of various calibers did not work, so they were disposed of in specially prepared places. For combat operations in urban environments, jihadists also use home-made grenades of various types, as a rule, pre-prepared forms are filled with C-4 plastic substance. And for the conduct of the attacks, large-scale production of large metal-bomb mines with explosives based on ammonium nitrate and kerosene was organized.

Analysis of the actions of the IS militants suggests that the manufacture of improvised explosive devices, mines and rockets was organized by them in workshops using machine tools from captured enterprises. Usually, the work was carried out under the control of mine-blasting specialists trained in training camps of illegal armed groups. That is, this is the already established system of recruitment, training and the use of militants both on the front lines and in the rear.

The discovered shahid belts are distinguished by detonators and explosive devices. There are radio-controlled products with switches on the infrared and unloading sensors. There are belts with an areal closure of the type "Garland". This once again speaks of the cynicism of the commanders of terrorist groups, who do not even allow the thought of the return of a suicide bomber alive. In such a way only one way. If the fighter does not decide to press the button himself, the team will go to the explosive device by radio.

Aleppo consists of one and a half hundred blocks and has no single plan. For the old areas characterized by unsystematic, dense, solid buildings. Many streets, narrow and winding, end in dead ends. Here, terrorist groups fought with government troops, mining sewage tunnels, buildings, sections of streets. That is, almost everything, so the clearing of such places is carried out with the utmost care. Due to underground structures requiring verification, the scope of work is increasing. The normal functioning of the search tools is hampered by the large clogging of city streets by fragments of ammunition. In addition, the cleaning of the area from explosive objects has to be conducted next to the monuments of cultural heritage that are under the protection of UNESCO. For example, in Aleppo, in the old city, a large number of IEDs were found to be non-recoverable. Russian sappers at risk to their lives destroyed them while observing measures to protect the civilian population, or neutralized them so as not to destroy vital or historically valuable objects. Sometimes it was done under fire.

Russian engineering units have to take into account even the nature of the soil. The terrain in the area of ​​Palmyra is a clayey desert with an upper layer of soil, as a rule, quite dense. Self-made explosive devices on it and along paved roads are easy to detect. Therefore, the militants have moved to the manufacture of camouflage enclosures, the use of household items, children's toys. Such dangerous objects, as well as ammunition installed on the non-recoverability, were either neutralized on the spot, or, if possible, transported to a safe distance for further destruction.

The demining team of the International Mine Action Center of the Armed Forces of the Russian Federation in 2016 – 2017 performed the task of clearing explosive objects in the areas of the architectural and historical complex, the residential part and the airport of Palmyra twice. 2339 hectares of territory checked, cleared, 219 kilometers of roads, 10 476 buildings and structures, 24 065 explosive objects, including 1062 IEDs, were found and destroyed.

More than 36 thousands of “gifts” were discovered and destroyed during the clearance of Aleppo. They cleaned about three thousand hectares of territory, 945 kilometers of roads, about five thousand buildings and structures.

According to the leadership of the engineering troops, our most serious partners and assistants in mine clearance issues are colleagues from the PRC, Iran, Serbia. They are also the most interested in developing cooperation with Russia on this specific problem.

But in reality, only Syrian and Russian sappers work in the SAR. Although Russia is ready to interact with everyone. To this end, serious negotiations with the UN. Indeed, after peace comes to Syria, and it is inevitable, the work for sappers will not be less. On the contrary, it will be very much. Therefore, today the first, main goal is the exchange of information collected in Russia and other countries on mine clearance issues. The second task is to promote the International Mine Action Center to the security market.
Our sappers have a huge combat experience. There is something to teach others than to share. This is a great humanitarian mission.

At present, experts from Armenia have already completed a training course at the International Mine Action Center of the Armed Forces of the Russian Federation. Currently, military personnel from Belarus, Kazakhstan, Tajikistan are gaining experience here. Applications were filed by nine more countries whose representatives want to learn how to demine from the best in their field. So for the near future everything is painted. Sooner or later they will express a desire to adopt the Russian experience and their European colleagues, because we have one task - to render not only Syria, but also all the countries affected by IG actions the necessary assistance, to save the lives of hundreds of thousands of civilians.