Sergey Chernyakhovsky: Creating a monument to "victims of political repression" is a controversial idea

November 2 2017
61
If someone believed that the monument to the “victims of political repression” would serve to establish consensus in the society, he is not well aware of the real state of affairs.


Creating a monument to the victims of political repression is in itself a politically controversial undertaking.

And because the victims were different - and who was guilty, and who is innocent - the question is more than unexplained and separate.

And because not all of society wants to condemn repression as such. 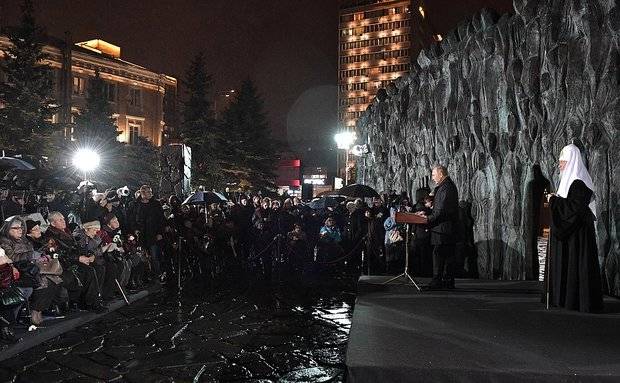 The opening ceremony of the memorial to the victims of political repression "The Wall of Sorrow". Photo from kremlin.ru

That is, a monument of this kind is a definite formal victory of one political force over another political force. Moreover, the first force in society has the support of 10-20%, the second - from 35 to 60%.

The first group imposed its will not only the second - the whole country, which this undertaking was absolutely not fascinated. And she imposed it not at the expense of her authority, but at the expense of supporting the authorities, who this time openly sided with the obvious minority against a clear majority.

This undertaking is anti-democratic - but it is also dangerous for the country. If someone believed that the construction of such a memorial would serve as a statement of consent in the country and society - he is clearly ill-imagined about the real state of affairs. Because this memorial confirms the position of one side - and rejects the position of the other.

The naive assertions that “in what, in what, but everybody agrees in condemning Stalin’s repressions” are more than naive. Even this is not true, although, of course, political repressions are condemned by a significantly larger number of people than those who condemn Stalin: 8% are fully ready to accept his criminal, partially 18%. The rest one way or another do not support this statement.

From this point of view, Putin, having arrived at the opening of the “memorial to the victims” and said literally: “This terrible past cannot be erased from the national memory and, all the more, it cannot be justified by any higher so-called benefits of the people .... There can be no justification for these crimes. Political repressions have become a tragedy for our entire people, for the whole of society, a cruel blow to our people, their roots, culture, and self-consciousness. The consequences we feel so far. Our duty is to prevent oblivion. The memory itself, the clarity and unambiguity of the position, assessments in relation to these dark events serve as a powerful warning against their repetition, ”he stated in solidarity with the majority. And pushed away from himself only a minority.

According to this year’s Levadov data, the number of those who justify repressions is 25%. No Excuses - 39%.

Only, firstly, on the eve of the presidential election, it was better not to do it - and at least to keep a distance, stand over the fight. Of course, he will win the election anyway - but the question is not that today. The question is in the conditions of confrontation with arrogant and aggressive geopolitical competitors to demonstrate the maximum unity of the country and the maximum support for it as a national leader.

Putin tried, as it were, to soften this “blow to his own ones”, saying in the end: “Yes, we and our descendants should remember the tragedy of repression, the reasons that gave rise to them. But this does not mean to call for a note of accounts. You can not push society to the dangerous confrontation line again. Now it is important for all of us to rely on the values ​​of trust and stability. Only on this basis can we solve the tasks facing the society and the country, Russia, which we have one. ”

Only by saying absolutely correct words about the inadmissibility of confrontation, the value of trust and stability - he himself struck a blow at these beginnings, pushing society towards a new confrontation.

The line is not made. And if failed - it is not the finish, but a new starting one. Instead of closing the old standoff, Putin unwittingly gave a signal to the new. His words, said at the opening of the memorial, will not become a consensus public opinion: one part of society will not agree with the fact that it is necessary to “forgive”, the other - that it is necessary to “condemn”.

Some, intoxicated by the support they received in words of condemnation, will declare that it is impossible to forgive. Others, offended by the same words, will not be satisfied with a declaration of forgiveness - and will demand satisfaction for an insult. The fight will flare up again.

And who is actually the majority here, and who is a minority, this is a separate question.

Here are the numbers in the dynamics: 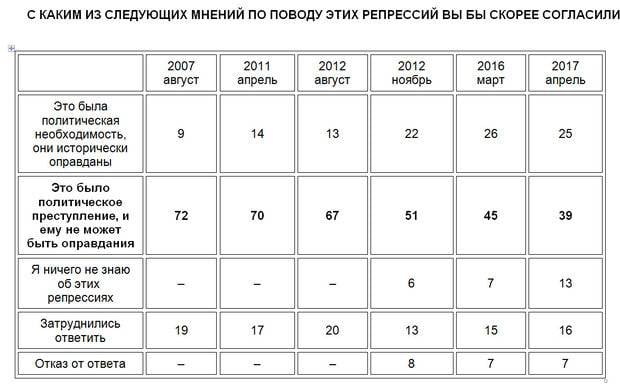 The first one and a half times less than the second - but a quarter of the population, "calling for repression" - is more than solid.

However, more is important. For ten years, the number of “acquitted" has almost tripled - from 9%. During the same time, the number of condemning ones fell almost twice.

But in general there is already another question: why is not more and more those who positively assess Stalin, but those who do not want to condemn repression.

And here there are two answers:

First - just society is tired of the impunity of real criminals - from economic to political. It is immoral to talk about the condemnation of Stalin, not condemning Gorbachev and Yeltsin. And they have no moral right to condemn 30-40, those who are guilty of the tragedy of “perestroika” and “reforms of 90”, as well as those who did not directly and publicly recognize the destruction of the USSR and the policy of 90.

Second. In a society in the period of information terror of the end of 80-90-ies. the perception of the word “repression” was imposed as an analogue of the words “punishment of the innocent”.

But “repression” as a concept is “reciprocal suppression”. The political repression carried out by the state is only its essential and obligatory function: the suppression of resistance to its policy. Implementation of repression is the responsibility of the state.

This does not mean the suppression of the opposition - as long as the latter remains the opposition, rather than becoming a force seeking to destroy this socio-political system.

Where the state refuses to perform its repressive functions, where it ceases to suppress its opponents, it ceases to exist. A politician's refusal of repression is already a crime, because, as can be seen from the example of Yanukovych and Gorbachev, this refusal leads to the death of hundreds of thousands and millions of people. The state, strictly speaking, is necessary in order to carry out repression.

And that is why the topic of “condemnation of repression” is so important. For those who put the task of the destruction of a state.

The theme of “condemnation of Stalinist repression” was raised at the end of the 80s. precisely in order to deprive the immune systems of a state of will, to deprive it of its ability to protect the country and society.

Formally, condemning repressions appeal to the tragedy of the death of the innocent - and condemn them. In fact, they paralyze the ability of a country and a state to protect itself. They deprive the state of the ability to remove from its path groups opposing national interests. Deprive the majority of the country to protect their interests.

Many will disagree, but if a country (any country) wants to develop further and be protected from the pressure of external geopolitical forces, it must recognize a simple and natural thing: repression is the responsibility of the state and the elite, refusal of repression and condemnation of repression is a crime before people and the state.

Ctrl Enter
Noticed oshЫbku Highlight text and press. Ctrl + Enter
We are
About Stalin and KhrushchevWhat you didn't want to know about England
Military Reviewin Yandex News
Military Reviewin Google News
61 comment
Information
Dear reader, to leave comments on the publication, you must to register.