November 4 2017
188
Since 2005, in Russia, 4 November is annually celebrated one of the main public holidays - National Unity Day.


The statesmen, choosing the day for the celebration, tried to kill two birds with one stone - to keep the November holiday and at the same time try to distance themselves from another November date. This, of course, is about 7 November - as the date of the October Revolution, from which almost a century passed.

The task of the official authorities when choosing a holiday is quite understandable: the authorities solved the issue in such a way as to make an attempt to achieve reconciliation in the country against the background of a significant social split related to the revolutionary day and the very attitude of various sectors of society towards the October revolution as a historical fact.

Actually confirmed the desire to achieve reconciliation in the country and Russian President Vladimir Putin. Speaking at a meeting of the Council for the development of civic and human rights, the head of state said the following:
I hope that this date will be perceived by our society as summing up the dramatic events that have divided the country and the people, will become a symbol of overcoming this split, a symbol of mutual forgiveness and acceptance of the national stories as it is: with its great victories and tragic pages.

That is, National Unity Day - 4 of November, but hope is placed on November 7 - as a kind of cut-off, after which a certain internal click should occur in society and the attitude to the events of the 100-year-old will long cease to cause heated debate.

For obvious reasons, no intra-social click to a one-time reconciliation on such a sensitive question will lead, and therefore it is possible to expect it, of course, but does it make sense? The only thing that can somehow bring about overcoming a split in the sphere of assessments of a revolution is time. And how much of it still has to go so that the historical “revolutionary” topic is discussed without clenching fists - only God knows. A whole century was not enough ...

What's up with the new holiday - the Day of National Unity? By and large, there is not enough time for him to become truly unifying. And is it a matter of time, or is the reason another? Perhaps the reason is exactly the one for which this day was supposed to set off November 7. Too close in the calendar are these dates, so that we all began to clearly separate them from each other.

Everyone understands that these dates in the calendar and events describe something different, and that between these events are more than three centuries, but the dates are estimated from the point of view of today's day. And on a grand scale to celebrate national unity against the background of the events of four hundred years ago, so it turns out, the people are not used to. And here is a purely psychological aspect. Most Russians, according to recent polls, consider the main figures of the 1611-1612 people's militia to be the heroes of the Fatherland. 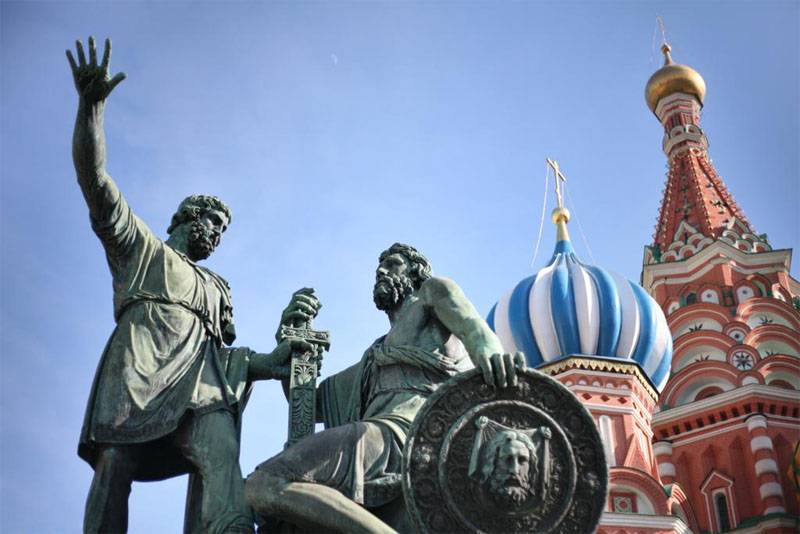 With this, no one is going to argue. Glorious page history. Day of Military Glory. But very long ago it was so that she could truly stir up the soul and minds in today's day. So the person is arranged. Psychology does not give and is unlikely to give real depth to the holiday. Well, except unity on the background in order to poke the Poles with their noses, each time asserting about the Soviet “occupation, in the history in which Russia at one time was under the occupation of Poland. But, firstly, not all Poles are “Matserevichi” to “poke their noses”, secondly, we are not the kind of people to gloat and keep in memory where we could constantly poke our noses.

Perhaps this is our main unity. We are not accustomed to poking around in dirty laundry, not accustomed to live not according to conscience. Let it be inappropriate for the modern world. Let the pragmatist, cold calculation be necessary. But such is our spiritual organization. Those are united and different from many others. That laid the foundation of the Russian (in the broadest understanding of this term) world, which is built, but it is still very difficult to build.

What does the holiday mean, which still calls for a new one, in its essence? Not so much, of course, about the victory over the Poles. The thing is that in a difficult time the Russian people can and is ready to rally, ready to confront the enemy selflessly. The holiday is intended to give a consolidation point for the multinational and multi-faith people of Russia. Russians and Tatars, Ingush and Buryats, Ossetians and Ukrainians, Kalmyks and Mari - a great many peoples and nationalities. This is our wealth, this is the essence of the Day of National Unity. And let the historical occasion itself, chosen for the appointment date, took place as much as more than 400 years ago, but, by and large, everything is in our hands today. After all, it is not necessary to send the essence of the holiday to a specific event in history. Especially since there are as many interpretations in the history of interpretations as there are historians ... It is important to build Russia's modern, tradition-based, warm-heartedness and diligence inherent in each of us. Against this background, it is important to understand that we are citizens of a great country. And love for it cannot be determined by a purely personal attitude to each historical epoch. Epochs are different - the Motherland is one.

Ctrl Enter
Noticed a mistake Highlight text and press. Ctrl + Enter
We are
Results of the week. “In our cooperative, the board is always agreed”Strangulation: the context, conduct and consequences of the American naval blockade of China
188 comments
Information
Dear reader, to leave comments on the publication, you must to register.