Combat robot "Nerekhta" will be adopted

November 2 2017
27
The Russian defense industry develops and tests new robotic complexes of various types and for various purposes. According to the test results, new equipment is sent for revision or receives a recommendation for adoption. With the positive results this year, the necessary checks of the Nerekhta complex, which will now have to go into service and go to the troops, have come to an end.


On October 30, the Interfax news agency published several interesting statements by the head of the innovation research department of the Directorate General for Research Activities of the Ministry of Defense, Colonel Oleg Pomazuev. The representative of the military department spoke about current work in the field of combat robotic complexes, and also announced news perspective project "Nerekhta". According to him, the product of the latter type has successfully coped with the tests and now has to go to the troops.

Colonel O. Pomazuev said that in the summer of this year, a number of new types of combat robots were tested at the Alabino training ground near Moscow. One of the participants in these events was the Nerekhta complex. A special track was prepared at the site, where the presented samples could demonstrate their capabilities in the field of mobility, overcoming obstacles, including water ones. In addition, at the site, robots used standard weapons and showed their fighting qualities.

As reported before the start of testing, after such events, scheduled for July of this year, the Ministry of Defense had to examine the real possibilities of promising technology and make its decision. According to the results of tests, promising robotic complexes could enter service. According to previous official statements, it was planned to test the systems “Nerekhta”, “Companion” and “Uran-9” at the test site in Alabino.

In general, "Nerekhta" and other modern samples have shown themselves well in the course of recent tests. The head of the innovative research department also noted that in a number of indicators compact robotic complexes are superior to existing habitable combat vehicles used by the ground forces. The main result of the comparative tests will be the adoption of the Nerekhta complex. The corresponding order will appear soon.

O. Pomazuev asserts that the Nerekhta robotic complex will be used by troops as they are. The armed forces receive new systems of this kind, designed to solve various tasks. Robots are designed for reconnaissance, bomb disposal, fire fighting, etc. In the foreseeable future, such a technique is supposed to be entrusted with conducting storms or percussion operations. One of the means for such work, apparently, will be the Nerekhta complex.

The representative of the Ministry of Defense noted the positive results of the recent tests of "Nerekhta", and also announced that the complex would soon be accepted into service. However, he did not specify the timing of the appearance of the relevant order, and did not announce the start time of mass production and deliveries of finished equipment. The number of robots planned for the order is also not named. It is known that the complex "Nerekhta" may include machines for different purposes, but this aspect was left without comment. However, even without such details, the latest news in the context of the development of robotic tools looks extremely interesting.

The project of multipurpose combat robotic complex "Nerekhta" is a joint development of the Plant them. Degtyarev (Kovrov) and the Foundation for Advanced Study. The aim of the project was to create a universal remotely controlled tracked platform with a set of interchangeable modules for various purposes. With the help of this technique, it was proposed to reconnoiter, transport small loads or attack the enemy. Work on the new project started back in 2013, and soon the general public became aware of its existence.

In the spring of 2015, data on the overall appearance of a promising robot was published. In addition, then the need for testing and fine-tuning equipment with the parallel development of some new components and assemblies was indicated. In the middle of autumn of the same year, the modified prototypes of the complex were demonstrated at the exhibition “Innovation Day of the Ministry of Defense”. At the event visitors were shown immediately two prototypes that received equipment of different types.

The complex "Nerekhta", according to official data, consists of several main components. The first is a remote control. It includes devices for monitoring the operation of systems, radio equipment, a monitor for outputting a video signal, etc. The console has a small size that allows you to carry it by the operator or transport it on any available transport. 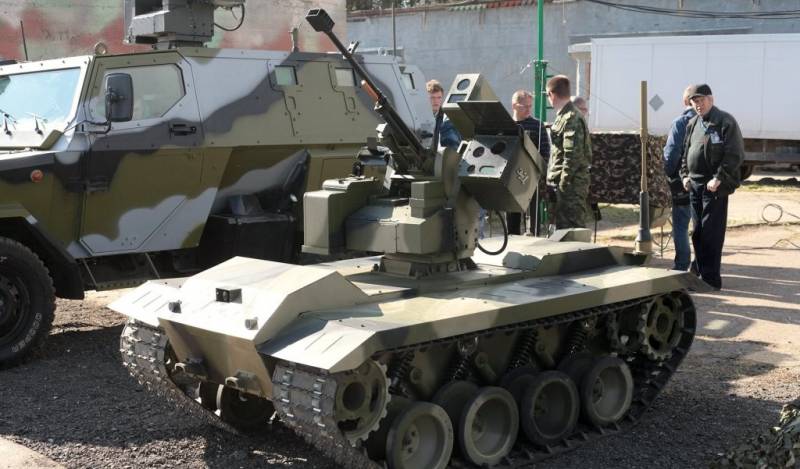 The main element of the robot is a universal platform on a tracked chassis. It is a compact armored vehicle with its own power plant, transmission and chassis, equipped with communication and control devices. A housing with a reduced cross section that reduces the visibility of the robot may have 5 class protection. In the upper part of the case there are fastenings for mounting target equipment chosen by the customer. Along the perimeter of the car are installed video cameras designed for driving and tracking the surrounding space.

Inside the hull is a hybrid power plant, which allows to use an internal combustion engine or an electric motor for movement. There is a tracked undercarriage with four support rollers on an individual suspension, placed on each side. The drive wheels of the pinching gear are located in the front of the hull, the guides are in the aft.

The simplest modification of the Nerekhta robot is a transport one. In this case, the cargo platform and some other equipment are installed on the universal platform. In particular, it is possible to use a winch or a crane with a remote control. In this configuration, the machine can transport cargoes, independently carrying out their loading, as well as solve other auxiliary tasks.

For obvious reasons, the most famous was the combat version of “Nerekhta”. Such a robot is equipped with a remotely controlled combat module. The latter is a platform with its own pointing drives and a set of required equipment. The module can have a PKT machine gun in caliber 7,62 mm, large-caliber CORD or an automatic AG-30M grenade launcher. It was previously stated that a new machine gun could be developed specifically for the robotic complex. The possibility of equipping the “Nerekhta” with a missile system was also mentioned.

On one rocking device with weapons an optoelectronic unit is installed. To search for targets, the operator is offered to use “traditional” means in the form of a video camera, a thermal imager and a laser range finder. Data from these devices are transmitted via radio to the operator’s console. Airborne devices ensure shelling targets in all directions horizontally with elevation angles from -20 ° to + 60 °.

Also in the framework of the project "Nerekhta" was proposed so-called. artillery intelligence module. In this case, a large protected unit with advanced optical-electronic means is installed on the track platform. During the observation, the optics can be extended upwards using the existing telescopic mast. With such equipment, the robot is able to observe objects at ranges up to 5 km by day or 4 km at night. Data on detected targets can be transmitted to various consumers.

The curb weight of the platform without special equipment reaches 1 t. Load capacity - 500 kg. The chassis can reach speeds of up to 30-32 km / h. The working radius is limited by the characteristics of the communication systems. According to published data, the car can be removed from the operator only 3 km.

Previously, the industry demonstrated the capabilities of the newest robotic complex. In the course of such a show, a group of robots “Nerekhta” with different equipment attacked a conventional enemy with joint efforts. At the same time, a machine with an artillery reconnaissance module timely detected the target and issued a target designation to the robot with the combat module. The joint efforts of the two machines conditional enemy was detected, fired and destroyed. 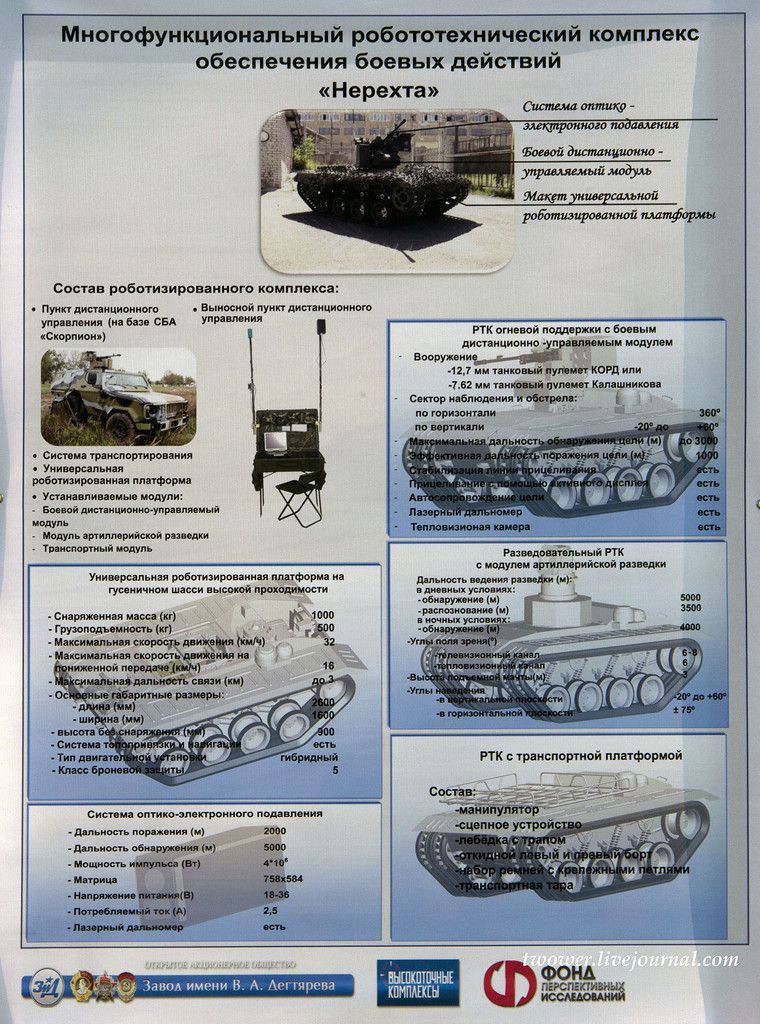 Already during the first public demonstration, the authors of the project “Nerekhta” talked about their plans and future work. It was argued that in the very near future the robotic complex would be sent for tests, during which it would have to show all its capabilities and interest the customer. At the same time at that time there were certain difficulties of a specific nature.

At the beginning of 2016, reports appeared in the press about the imminent start of testing robots in the interests of the Ministry of Defense. Unnamed media sources claimed that the project developers and potential customers faced some difficulties. A prospective sample was required to fit into the existing structure of the ground forces, so that the desired results could be obtained. Such works, as noted, were associated with certain difficulties.

According to later reports, the Nerekhta robotic complex was brought to the training ground for the necessary checks. A few months ago, after completing part of the tests, it was announced that the new checks would start soon. For the summer, joint testing of several equipment samples was planned. Now the robots had to not only show themselves at their best, but also compete with other equipment. According to the announced plans, after comparative tests, the military were going to resolve the issue of adopting equipment for armament.

As the head of the innovative research department of the General Directorate for Research and Development activities rightly noted, at present the bulk of new robots for the army is designed to solve auxiliary tasks. Nevertheless, the situation is gradually changing, and in the near future, the armed forces will receive promising remote-controlled equipment with their own weapons. The presence of modular systems for various purposes will further increase the potential of the Nerekhta robotic complex in the context of expanding the capabilities of the troops.

After several years of development work, testing and development, one of the first domestic combat robots was able to reach the stage of adoption. The direction of robotic complexes not only develops, but also gives real results, contributing to the re-equipment and modernization of the army.

Ctrl Enter
Noticed oshЫbku Highlight text and press. Ctrl + Enter
We are
Fighting robots in future wars: expert conclusionsThe project of the robotic complex "Nerekhta"
27 comments
Information
Dear reader, to leave comments on the publication, you must to register.