November 2 2017
24
In accordance with existing plans, in the foreseeable future, a new type of military transport aircraft, developed as part of the ATSS project, will have to enter the air forces. At one time, the process of creating such a technique was dragged out pretty much, but by now the main problems have been solved, and in the near future the necessary technical documentation should appear. Just the other day aviation industry announced plans for the ATSS project.


On the last day of October, the TASS news agency published a lengthy interview with a representative of the Aviation Complex named after S.V. Ilyushin. The journalist of the publication spoke with Igor Bevzyuk, who heads the work on the topic “Medium-scale military transport aircraft”, and received a number of very interesting information. As it turned out, by now the project has managed to move forward and soon the work will be transferred to a new stage, bringing the moment of adoption of the technology into operation.

I. Bevziuk recalled that the idea of ​​creating a medium transport aircraft for the Air Force, capable of replacing the outdated An-12 and other similar techniques, appeared at the turn of the eighties and nineties. At that time, the company "Ilyushin" conducted a theoretical study of a promising project, but this work stopped. Due to certain reasons, it was not possible to get fundamental advantages over the existing or alternative equipment, because of which the project was stopped. 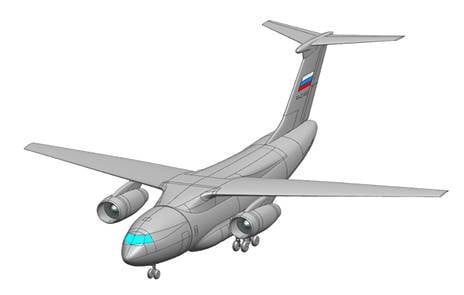 The proposed appearance of the aircraft SVTS / IL-276

In the future, alternative development projects of an average transport worker developed by other organizations were developed. However, at the beginning of the last decade, the Russian industry again had to return to the IL aircraft. In addition, the Indian side showed its interest in such a project. According to the results of fairly long-term joint work, Russia and India formed requirements for a promising aircraft called MTA or MTS (Multipurpose Transport Aircraft). In the future, there were some difficulties of a technical nature, because of which the work actually stopped. However, according to I. Bevziuk, the Indian side has not yet documented the refusal of such a project.

Despite these events, the Russian Air Force continued to experience the need for medium military transport aircraft capable of replacing the existing An-12 with a terminating resource. In 2014, the aviation complex to them. Ilyushin proposed the Russian Ministry of Defense to expand work under the SVTS program. At the same time, in the requirements for technology it was planned to take into account only the needs of the Russian customer, excluding any Indian influence. Soon it was decided in principle to develop a new project.

Reportedly, preliminary design work on the subject of SVTS was carried out by the designer on an initiative basis. In addition, the Ministry of Defense and the Ministry of Industry and Trade agreed on a draft tactical and technical specifications for such an aircraft. However, the approval and approval process is not yet complete. Completion of this stage of the program will allow to continue the work with obtaining the desired results.

It is noted that at the moment a promising military transport aircraft has no official designation. The project of the machine being developed under the SVTS program is still working, IL-276. Later, in accordance with the decision of the customer, this name may become official or change. Anyway, the official designation of the future of the aircraft has not yet been determined.

I. Bevziuk described the plans of the Ilyushin company for the near future and distant future. In December, it is expected to begin the conceptual design of the new aircraft. The design work will take several next years. Not later than the start of 2023, the design, preparation for production and construction of the first prototype will be completed. The first flight of the prototype is scheduled for the first quarter of the 2023. The necessary checks are expected to be completed in 2025, and in 2026, troops will be able to receive the first serial SVTS.

To optimize the basic processes at the development stage, modern methods and design tools are used. Used CAD systems. In addition, already from the stage of preliminary design it is proposed to take into account the technological aspects of the project, logistics, operation and maintenance, etc. Also, special attention is paid to the financial side of the project. Both the entire project as a whole and its individual components must correspond to a given cost price. One of the ways to solve such problems is the timely correction of identified deficiencies.

Earlier, representatives of the aviation industry described the possible appearance of the future "Medium Military Transport Aircraft", thanks to which it was already possible to draw up a rather detailed picture. In the latest TASS publication, the available data is refined and supplemented with some new details. From this it follows that the main technical features of the future aircraft have already been determined and are unlikely to change in the future.

According to official data, the project SVTS / IL-276 provides for the construction of a single-body high-flying plane with a T-shaped tail unit. From the point of view of the overall layout and aerodynamic appearance of the new aircraft will resemble existing machines of its class. Under the wing, two turbojet engines with the required characteristics will be installed on the pylons.

As told the representative of the aviation complex to them. S.V. Ilyushin, the first version of the SVTS project, provides for the use of the existing PS-90-76 engine, currently being installed on the upgraded IL-76. This engine has the necessary characteristics, and also reduces the risks of a technical nature. In the future, however, it is planned to replace PS-90А-76 engines with newer PS-14 products with different parameters. As soon as the new engines confirm their characteristics, they will be installed on production aircraft.

A military transport aircraft of a new type should receive a large cargo and passenger cabin. The dimensions of the payload compartment were determined taking into account the requirements of the armed forces and, in general, correspond to the characteristics of the Il-76 production vehicles. The cross section of the cabin does not change in comparison with the latter, while the length will be slightly reduced. According to previously published data, IL-276 will be able to take on board up to 20 t payload.

Depending on the configuration of the cargo compartment and the additional equipment used, it will have to transport goods, equipment or people. The presence of a tail ramp will provide the possibility of loading and unloading on the ground, as well as the parachute landing of cargo or people.

Earlier it was claimed that due to the smaller size and reduced in comparison with the IL-76 characteristics, the new SVTS will be able to transport a significant part of the existing cargo of the armed forces with significant savings. Thus, he will be able to take on all the tasks of the existing An-12, as well as partially “replace” the larger and heavier IL-76, which to a certain extent will increase the efficiency of the military transport aviation of aerospace forces.

The SVTS program provides for obtaining cruising flight speed at the level of 800 km / h. In terms of speed characteristics, the new IL-276 will be significantly ahead of the existing An-12, which will give known advantages. Practical range with maximum load should reach 2000 km; distillation - exceed 7 thousand. Km.

The design of the chassis and take-off and landing characteristics are determined in accordance with the requirements for the operation of equipment at various aerodromes. In particular, the aircraft will be able to work on unprepared and unpaved runways.

Mock-up of the MTA / MTS aircraft demonstrated in the past

According to already known data and a recent interview with the project manager, the SVTS aircraft will be equipped with airborne defenses. How exactly it is proposed to protect it from possible threats - not specified. Apparently, for the defense will be used electronic warfare. It is also possible to use the cannon fodder traditional for domestic transport workers.

I. Bevziuk in his recent interview noted that the SVTS / IL-276 aircraft is considered, first of all, as a transport vehicle. At the same time, it will actually become a platform that can be used for various purposes. Probably in the future there may be a draft aircraft tanker on the basis of the original military transport vehicles.

To date, the developers have chosen the future builder of new technology. An experienced and serial "Medium military transport aircraft" will be built in the workshops of the Aviastar-SP enterprise in Ulyanovsk. This plant has already mastered the production of IL-76МД-90А serial heavy machines, and in the foreseeable future its product range will be replenished with promising average IL-276.

There are already certain plans in terms of the volume of serial construction. As stated earlier, during the first years of production, the industry would have to transfer to the customer several dozen serial SVTS aircraft. At first, the main task of mass production will be the replacement of obsolete An-12 machines, the operation of which is completed in connection with the development of a resource. According to known data, a little more than a hundred of such aircraft are currently being operated in Russia, and all of them will need replacing in the medium term. The number of available An-12 allows you to submit approximate order volumes for SVTS / IL-276, designed to replace them.

After the complete replacement of obsolete aircraft, the mass production of promising technology may continue. According to experts, medium military transport aircraft of the type developed by Ilyushin may be of interest to commercial customers from our country and foreign countries. The demand for such equipment is great, and the domestic industry can expect to receive new contracts.

Reports of recent years about the project "Medium Military Transport Aircraft" are a cause for optimism. The development of the project, whose roots go back to the end of the eighties, was seriously delayed, and so far it has not been able to produce the desired results. However, the need for a middle-class transporter remained, which led to another attempt to create such a machine. According to recent data, to date, this project is close to the start of preliminary design.

The design and development work on the SVTS will be completed in the first half of the twenties, and in the middle of the decade the development company plans to transfer the first production aircraft to the customer in the person of the Ministry of Defense. Thus, even if several decades after the start of work, the armed forces will still be able to obtain the required equipment and use it to replace outdated machines with a developed resource.