November 2 2017
41
The standoff of armor and projectile is eternal. Naturally, at the dawn of civilization and the emergence of military art as such, this confrontation was much simpler and more mundane, but its very principle remained unchanged. If earlier to the primitive cold arms, spears and clubs were opposed by wooden shields and leather armor, then in the 20th century, manufacturers of shells and artillery did everything to achieve superiority over the new multi-ton metal “monsters” facing the battlefields.


In 1943, during the battles in North Africa, Allied forces first became acquainted with German heavy a tank The Tiger, and later after landing in Italy and Normandy, also encountered numerous German Panthers. The meeting with German tanks - representatives of the cat family - made a strong impression on American and English generals. German armored vehicles surpassed the Allied armored vehicles in many respects and could calmly hit it from a fairly large distance. At the same time, the strong reservation of the Tigers and Panthers in the frontal projection made them very difficult targets for both the tanks and the Allied anti-tank guns. The problem was that the new German tanks began to meet the Allies in fairly large quantities. It was impossible to ignore this state of affairs.

In parallel with this, the US military got acquainted closer with the German anti-tank guns, which did an excellent job with allied armored vehicles at all combat distances in almost any conditions. Especially Americans were impressed by the German 88-mm anti-tank guns Pak-43 / 41 and Pak-43. Naturally, the US military wanted to have something similar and approximate in combat characteristics and in their units. 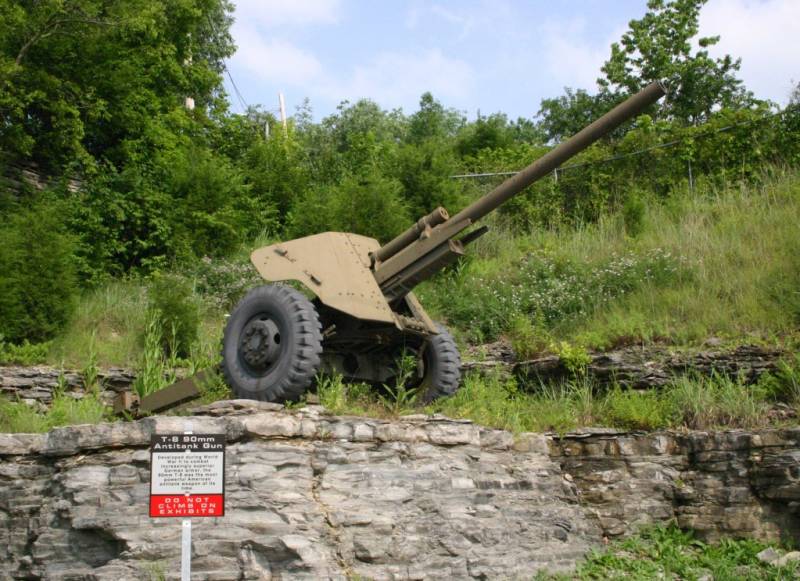 90 mm anti-tank gun T8
In fairness it should be noted that the Allies realized that they had real problems with the defeat of German armored vehicles much earlier than the landing in Normandy. Already at the end of 1942, reports on the fact that new German tanks with enhanced armor were resistant to the most common anti-tank gun in the parts of the 57-mm began to fall on the table of the American and British generals. The US Army widely used the M57 1 anti-tank gun, which was a modification of the famous English 6 gun.

Designing a new anti-tank gun began with an eye to the German experience with their famous 88-mm anti-aircraft gun, which also turned out to be an excellent anti-tank weapon. The Americans had their own counterpart - a good 90-mm M1 anti-aircraft gun, which they decided to combine with the recoil mechanism of the 105-mm howitzer M2-1. A new anti-tank gun received the designation T8, and the carriage used with it - T5. At the same time, there were certain problems with the gun carriage. During the tests, it turned out that it had serious shortcomings, which, in particular, were manifested during the transportation of the tool on the road. A lengthy process of processing followed, which led to the appearance of the T5E2 gun carriage, which was classified as a limited standard weapon.

But this design did not satisfy the military, and after additional tests at the Aberdeen Proving Ground was rejected. As a result, work on the creation of a new anti-tank gun, to put it mildly, dragged on. They began at the end of 1942, and ended only in 1944. In total, three prototype T8 anti-tank guns were built. In this case, an order was even received for a production batch of 400 guns, which was never completed. One of the prototype guns in February 1945 of the year hit the front and took part in the final battles of World War II.

105-mm T8 anti-tank gun on the T17 carriage in transport mode
At the same time, at the beginning of 1945, the Americans once again revised their concept regarding anti-tank artillery. It was decided to abandon the 90-mm anti-tank gun in favor of an even larger caliber gun. This was due to the need to effectively deal with the German heavy tank Panzerkampfwagen VI Ausf. B (Royal Tiger) and Panzerjäger Tiger Ausf tank destroyer created on its base. B (Jagdtigr). For a confident fight with them, the capabilities of 90-mm guns were considered by Americans to be insufficient, while for use in the Pacific theater of war, the capabilities of the gun were excessive. Numerous American 37-mm and 57-mm anti-tank guns could also fight with Japanese tanks.

So at the very end of the war in the United States began work on the creation of 105-mm anti-tank guns. They started back in October 1944. In addition to the appearance of the "Royal Tigers" from the Germans, the work on the creation of the gun also spurred the capture of the German 88-mm anti-tank guns Pak-43 / 41 in France. The new gun was definitely developed with an eye on the German trophies, which was reflected even in the appearance of the new American anti-tank gun, which, having changed the caliber, did not change its name and was also designated as Т8.

At the same time, the Americans definitely outdid the Germans not only with caliber, but also with the mass of their guns. The weight of the 105-mm anti-tank gun Т8 is American 8 (short) tons or in terms of the metric system of measures approximately 7250 kg. For anti-tank guns - this is very important. For example, the same German 88-mm anti-tank gun Рak-43 / 41 in a combat position weighed 4400 kg, which already caused problems with its use. To transport the German cannon, a specialized powerful tractor was needed, which did not eliminate the problems with transporting the gun on weak soils and off-road. The gun and tractor were vulnerable on the march and deployed in a combat position. In addition, it was very difficult to deploy, if necessary, for example, during an enemy flank attack. 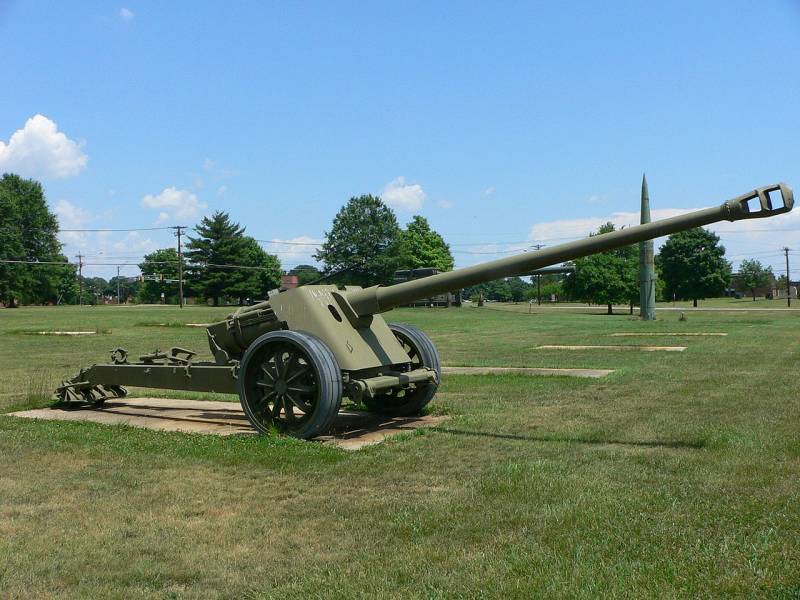 In total, the United States managed to create two such anti-tank guns, which reached the testing stage only by February of the 1946 year. By that time, the Second World War had already ended, and the Cold War had not yet flared up with the force to give life to this American “miracle weapon”. As a result, the project to create 105-mm anti-tank gun was closed. Today, one of these anti-tank guns can be seen in the exposition of the tank and artillery museum at the Aberdeen range in Maryland.

Ctrl Enter
Noticed oshЫbku Highlight text and press. Ctrl + Enter
We are
Protection and booking systems. Challenges, opportunities and trendsArmored Vehicles Market in the Middle East in 2005-2012 and forecast for 2013-2016
Military Reviewin Yandex News
Military Reviewin Google News
41 comment
Information
Dear reader, to leave comments on the publication, you must to register.