In the Russian Federation, an attack unmanned helicopter "Skymak-3001"

November 1 2017
26
The Ministry of Defense in the near future will begin testing an unmanned attack helicopter "Skymak-3001", created by the NGO "aviation system "in conjunction with the Flight Research Institute. M.M. Gromov, reported News. 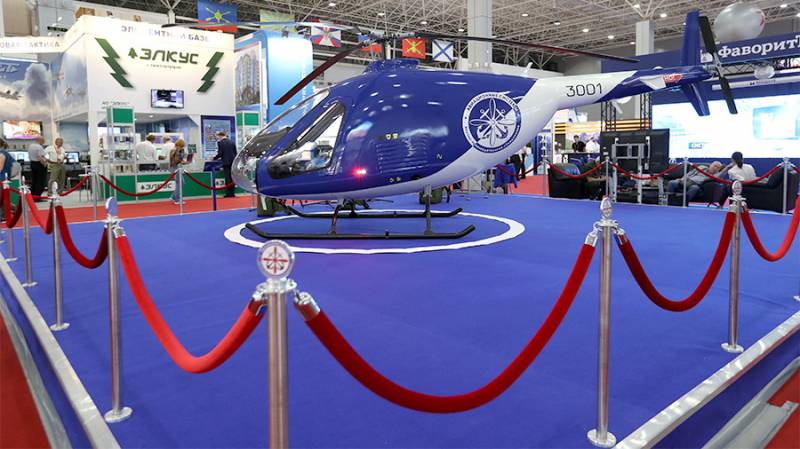 The military department told the newspaper that "the helicopter is already included in the list of promising aircraft unmanned systems." The decision to adopt it will be taken on the basis of test results.

According to the designer of the machine, Vyacheslav Krasnozhen, currently there is a technological assembly of four copies of the helicopter.

In six months, joint flight tests with the Ministry of Defense will begin. We position the car as a helicopter of primary flight training of cadets of helicopter schools. But in the interests of the military department, it can also be used for other purposes, including in the unmanned version,
said Krasnozhen.

“The machine weighs 800 kg and can carry a load of 500 kg to 175 km. In the movement of the helicopter leads domestic piston engine KB "Istra". Unlike most helicopter engines, it does not run on aviation kerosene or special imported 100LL fuel, but on regular 92 gasoline. At the same time, the helicopter has a speed of 200 km / h, it can be in the air up to 4 hours, and is capable of rising to a height of up to 6 thousand meters, ”the material says.

The editor of the UAV.ru industry journal Denis Fedutinov noted that “the abundance of helicopter-type UAV systems appearing on the market should not be misleading by a false sense of market saturation in the corresponding class of unmanned systems.” According to him, “a significant part of such devices does not even apply to flying prototypes and is set up for the marketing effect in order to attract investment in development”.

The most famous commercially available helicopter type UAV, currently in use, is the American FireScout. Based on the existing experience of its operation in the interests of the US military, as well as on expectations of further development of this subject, other countries are also working on the creation of a helicopter-type UAV,
told the expert.

The most interesting project in this area today is China. At the Tianjin helicopter cabin a new combat drone of the helicopter type AV500W was presented, the completion of which is scheduled for the end of the year. The helicopter has a takeoff weight of 450 kg, a payload mass of 145 kg, a range of 220 km, and a speed of 145 km / h. It can carry guided missiles FT-8D, based on the HJ-8 ATGM, as well as adjustable mini-bombs and free-fall bombs.

Ctrl Enter
Noticed a mistake Highlight text and press. Ctrl + Enter
We are
Project Boeing-Sikorsky RAH-66 Comanche Scouting and Shock Helicopter closed
26 comments
Information
Dear reader, to leave comments on the publication, you must to register.