Scientists against myths or how to get the "Bronze Reptiloid"

The great Confucius once said that teaching without thinking is useless, but thinking without teaching is dangerous. And it is clear why. A set of information without thinking about them has no value. But it's silly to think if you don't have information on the problem. But what if you own a limited amount of information and build your reasoning on the basis of incomplete knowledge? Then, then it is quite possible to say about such people that he sleeps and has a dream. After all, in a dream, our brain also functions and sometimes even quite well, let us remember at least the same Mendeleev with his table, and many others. But still, where, as often as we see, in a dream something is completely different, rather nonsense than reality, an unprecedented combination of experienced impressions. 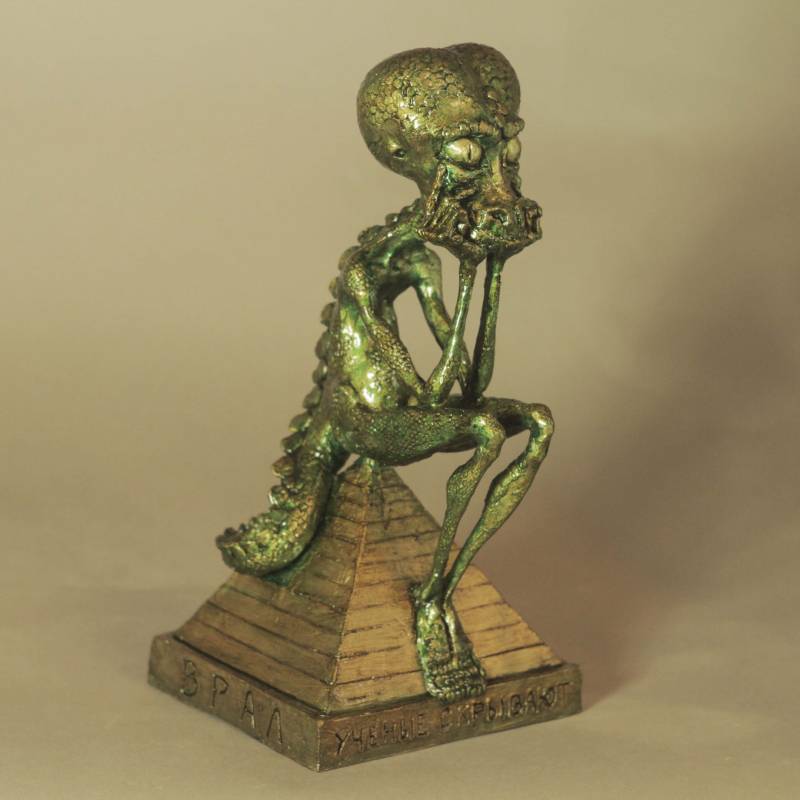 In a dream, a person does not think exactly, he is captured by the game of his own imagination, but just as he can be captured by the attractive images of his imagination, arising from incomplete knowledge. So, Alexander Kazantsev, by his youth, came up with an electromagnetic gun, made her model and even made his way to reception with Sergo Ordzhonikidze. “You’re looking for all the upholstery on the walls,” he said after shooting a nail at the wall and immediately ordered to help the young inventor. And what should I say? “Go, young man and learn!” Because at that time such a tool could not really be created. Even problems with him today, and already in the 30-s, it was only good for the novel “Burning Island”. 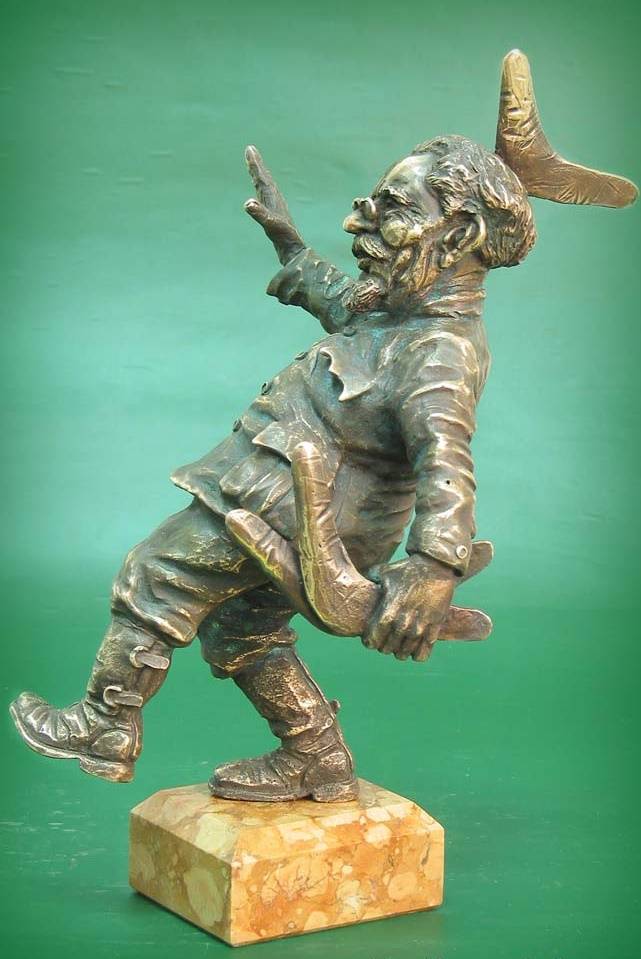 I am working now on the textbook “PR-design and PR-promotion”, and this information “fell” into the topic. There will be a chapter - “PR-promotion with the help of bronze and silver. But it is bad that there will be no pictures. But ... they can be placed here and clearly show that the "netlenka" of bronze and silver attracts attention and, accordingly, arouses interest in the object of awarding. I would give this sculpture of the Penza sculptor Igor Zeynalov as a sign of high achievements to our ... politicians. To not be arrogant! After all, Trotsky also achieved a lot of things ...

Today it's kind of worse. Knowledge is acquired very easily. But their volume has increased many times. Therefore, the work of mastering them is difficult. And as you know, there is nothing more contrary to human nature than hard work. Spend years reading many books? What for? When you can read just one book! Explore all 104 Egyptian pyramids? Not enough time or money. So let's see just one, but more. 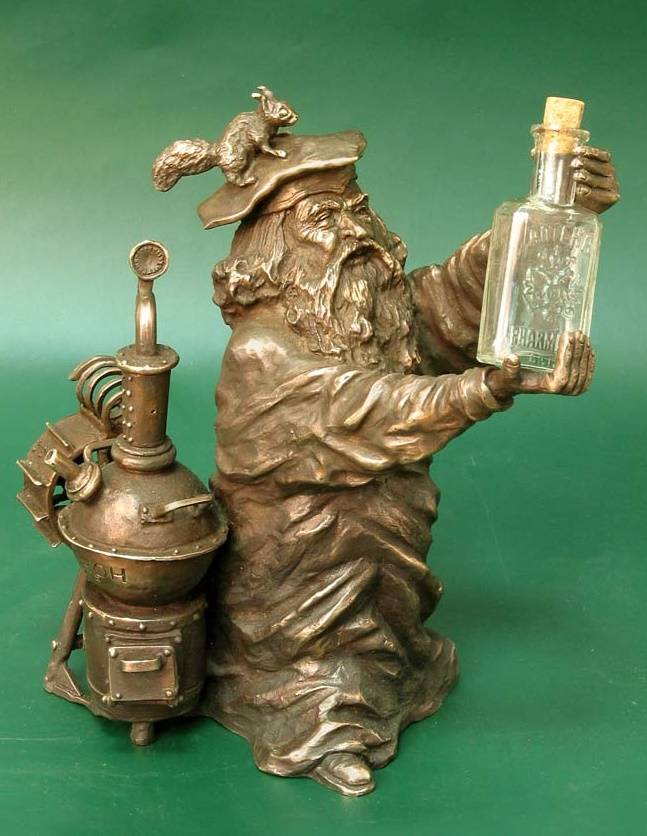 For achievements in the field of chemistry, you can present here such a Mendeleev!

Considering the slab in the tomb in the pyramid at the temple in Palenque? So after all it is necessary to fly to Mexico 13 hours. Troublesome, and expensive, and most importantly - for what, when everything is on the Internet. And there are two types of images. One banal, another interesting. It remains to choose. And if you choose “interesting,” you save both time and energy, but then you have to admit and then assert that this is an image of an astronaut in a rocket, and everything else is nothing but an attempt by bad scientists to hide the truth. And then it turns out that there are people in your environment who have never heard of anything like that, so even your incomplete knowledge is the same for them as the Academy of Sciences. It is clear that it is pleasant to feel a sense of self-worth, as well as attention to one’s own person. There is such a thing as exhibitionism, but there is also an intellectual exhibitionism, and what can I do in the Internet age - nothing! 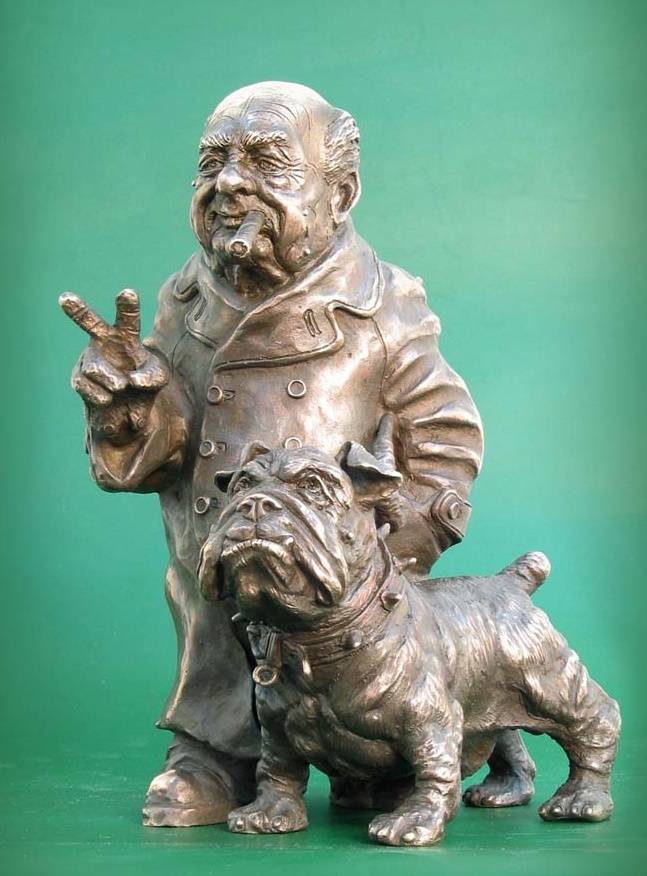 And this Churchill is also a politician, but only a beginner!

When the Chinese want to wish you the worst, they say: what would you live in times of change! Because traditions break, culture dies, and a new one appears, but it breaks out very slowly. Let's take a bit of this: a century, as sociologists say, is the life of three generations. Moreover, these three generations were supposed to live in conditions of stability. That is, if serfdom in Russia was abolished in the 1861 year, this meant that only by 1961 could the complete replacement of the feudal paternalistic consciousness and its characteristic culture occur. What happened? The 1917 revolution of the year was made by the children of yesterday’s slaves and ... what kind of consciousness and culture did they have and what did they bring to the cities during industrialization? 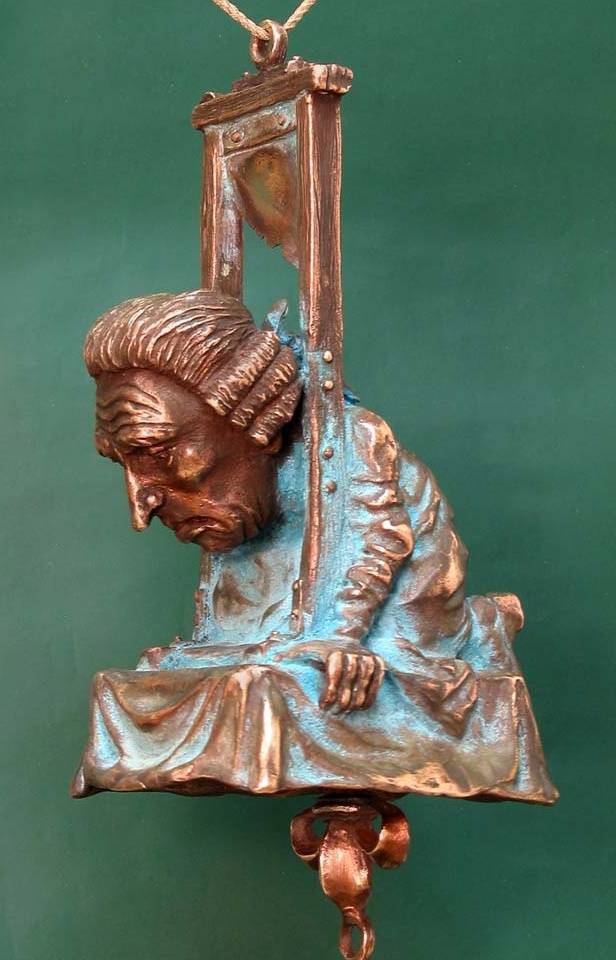 And this is Robespierre Bell. "For whom the Bell Tolls? He calls you! ”

So it’s not surprising that there is a rift in the closets and wobbling in the minds. Today in Russia, the psychological climate is the same as in Russia at the beginning of the century and ... the same distrust of official science, the same “searches” for deep roots, “ultimate truth”. And the same flowering of pseudoscience. Become very popular stories about all sorts of secret societies ruling the world, because the average man in the middle mind is just incomprehensible how his world could be broken, just yesterday it was so durable and reliable. So, “digging the Black Sea” against this general background of such fabrications is just nothing more than an insignificant particular. It is difficult to resist this, because there are always more fools than people who are truly literate and reasonable.

Today, within the framework of the forum “Scientists Against Myths - 5”, which was organized by the portal Anthropogenesis.ru and the Evolution Foundation, a solemn ceremony was held to award the creators of the most popular pseudoscientific theories with the title of academician of the Prudent Academy Pseudonauk and the original prize, made in the form sculptures of a sad but very cute reptiloid.

The Vrunicheskaya Academy of Pseudo-Lazhnauk or VRLA is a project of the anthropogenesis.ru research and educational portal and the Evolution Foundation. This “prestigious” organization, whose members are by choice people who “have made an outstanding contribution to Russian pseudoscience”. Well, the election of candidates for academicians is the responsibility of readers of popular science electronic resources by means of Internet voting. In this case, the nomination of one or another LIE can anyone. Moreover, neither the personality of the scientist himself, nor his research topics have any significance: they can be businessmen, and writers, and parapsychologists, and HIV dissidents, people with advanced degrees, and just those who spread pseudo-scientific ideas. All have the same chance of "success." 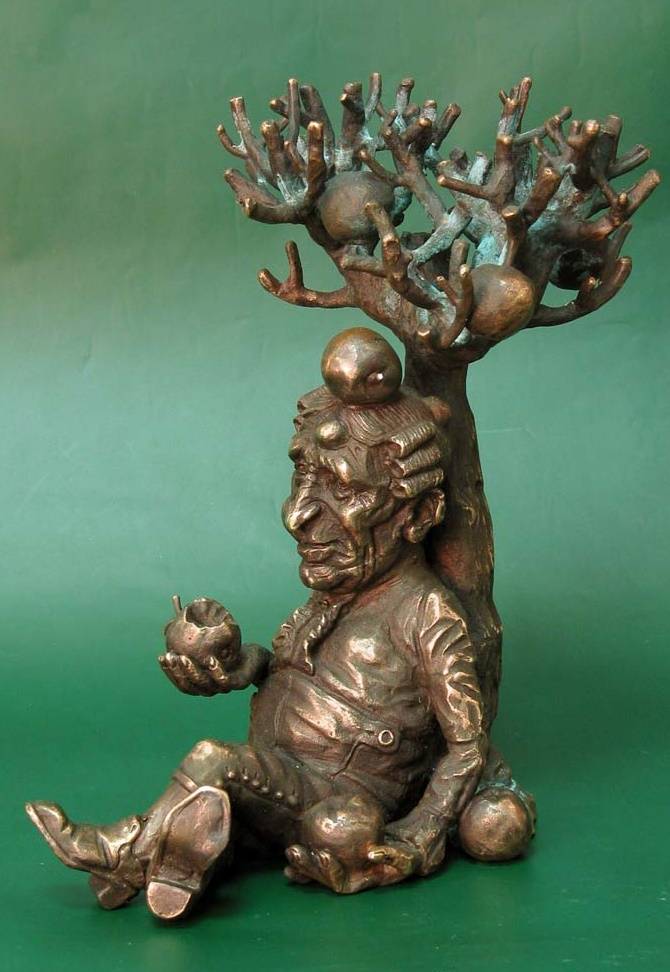 This, of course, is a prize for physicists!

The procedure for awarding the title of academic pseudoscience consists of several stages. In the semifinal, candidates are put forward in specially created groups in popular social networks, for example, Vkontak and Facebook. Then the jury, which includes the portal organizers and invited experts, selects the most popular candidates in the number of 10 people, and votes for the finalist. The election of an academician takes place at a ceremony in the framework of the forum "Scientists against myths." The finalists, who received the second and third places, are awarded the title “Corresponding Member of VRLA”, and the main winner is awarded a diploma from the Honorary Academician of the Vrunicheskoy Academy Lzhenauk and the main prize of the forum - the “Sad Reptiloid” statuette. Its design was developed by a talented sculptor Nikita Makletsov, and it depicts a thoughtful alien reptiloid sitting on the top of the Egyptian pyramid, on the basis of which the inscription “Scientists cheat” was made. 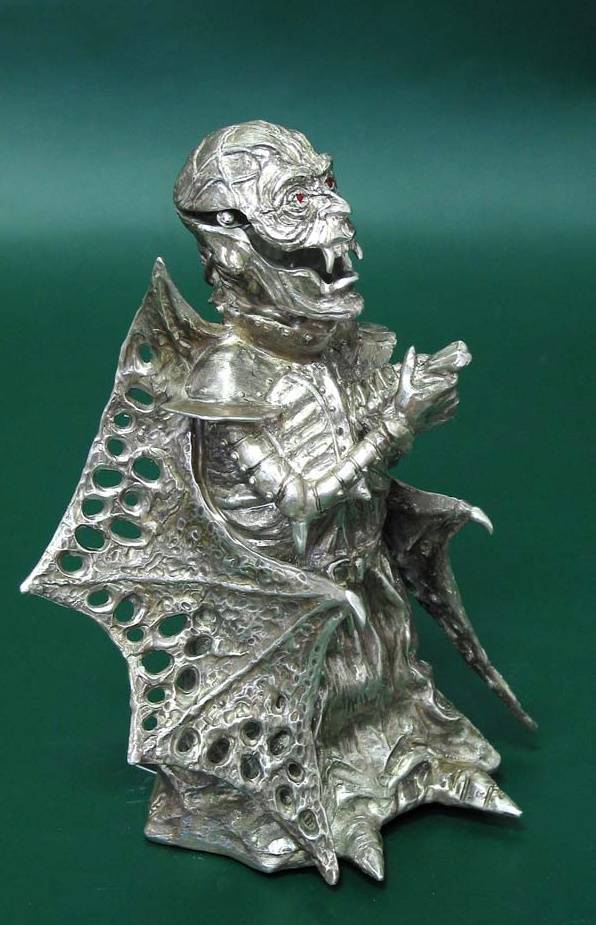 This is what Dracula does not know anyone and offer. But handsome dog!

Why and where such a design and explanation is not particularly required. After all, today we all know that without the help of the green-skinned scaly aliens from space, the Egyptians could not build the pyramids.

The first presentation of the award “Honorary Academic VRLA” took place in 2016 year. Then the corresponding members of the LEG were declared satirical writer Mikhail Zadornov (in the nomination for the love of the etymology of the Russian word), and of course Anatoly Fomenko, author of the pseudo-historical fundamental work “New Chronology”. Well, the winner, who was awarded the title of academician, was Irina Yermakova, the main activist of the Russian anti-GMO movement, who claims that the genetically modified products were actually created by an alien civilization to the people. Ernst Muldashev, Igor Prokopenko, Valery Chudinov and a number of other equally prominent supporters of various pseudoscientific theories also appeared in the top ten of the semi-finalists. 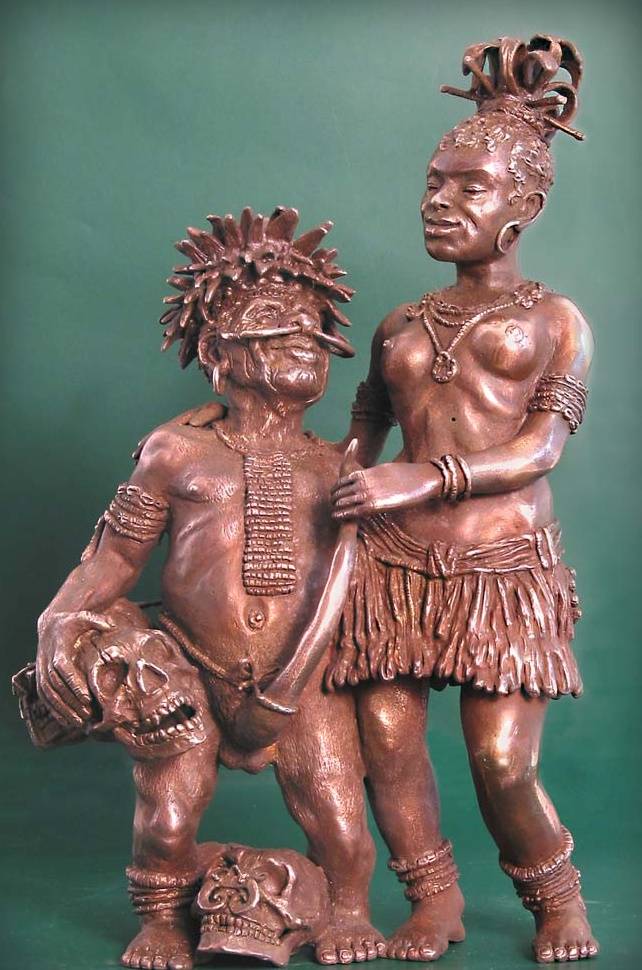 "Sweet couple". Again, who is to serve? Is that at the corporate condom manufacturers?

And just recently, namely 21 on October 2017, the regular forum "Scientists Against Myths - 5" was held, where the titles of the "Vorunicheskoy Academy of Sciences" were awarded for the second time. The jury included Stanislav Drobyshevsky - Russian anthropologist and popularizer of science, television and radio host Ivan Zatevakhin, astrophysicist Boris Stern and several others. The jury gave lectures exposing the false and pseudoscientific theories that are multiplying today like mushrooms after rain. It was told about the secrets of Caucasian dolmens, myths, wound around the culture of ancient Babylon, and the UN expert on the assessment of environmental change Nikolai Dronin gave a report on the "global climatology conspiracy." According to the results of the vote, Grigory Alfeyev (Metropolitan Hilarion) received the title of “Honorary Academician of VRLA” with the award of “Reptiloid” for his “invaluable contribution to the introduction of theology into the Russian education system” and even more so - in 2016 he headed the Joint Thesis Council on Theology . Last year’s candidate, Igor Prokopenko, deputy general director of the REN TV channel, author and producer of a number of high-profile projects, also reached the final. Olga Kovekh, the main ideologist of HIV-dissident groups, who refused to recognize HIV, viral hepatitis, the Ebola virus, as well as the benefit of vaccination, became the finalist No. XXUMX. 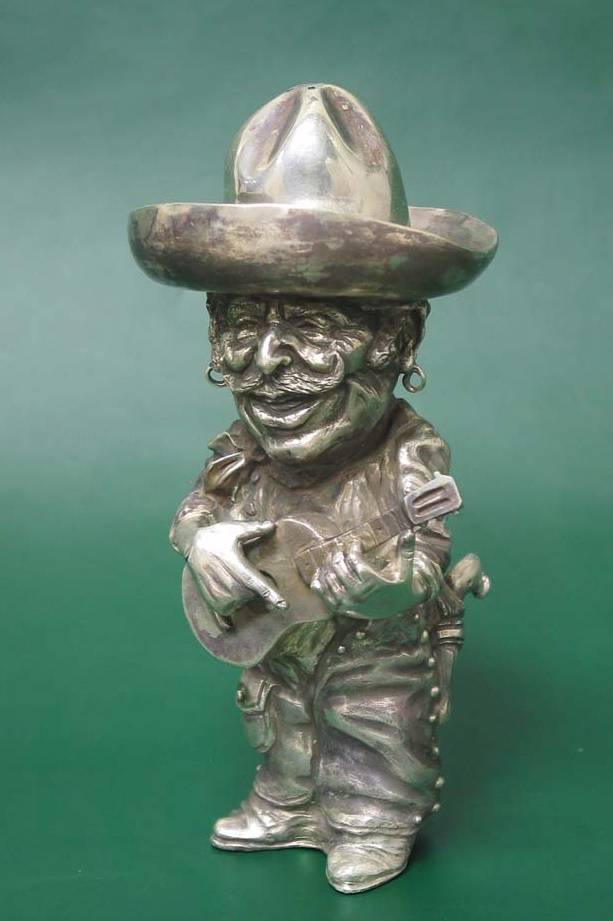 Ready prize for all lovers of musical folklore!

So at least in this way, but the scientific community and all sensible Russians celebrate the heroes of “trade in dope for the people.” However, first of all our common mentality is to blame for this, it’s not for nothing that Pushkin in his tragedy Boris Godunov wrote “And she feeds on fables!” “She” is a mob, and despite all the revolutions and changes we have, unfortunately still missing. The cultural level and the degree of consistency of our fellow citizens will change, and the demand for all these science subversors will dissipate like the morning mist under the sun! 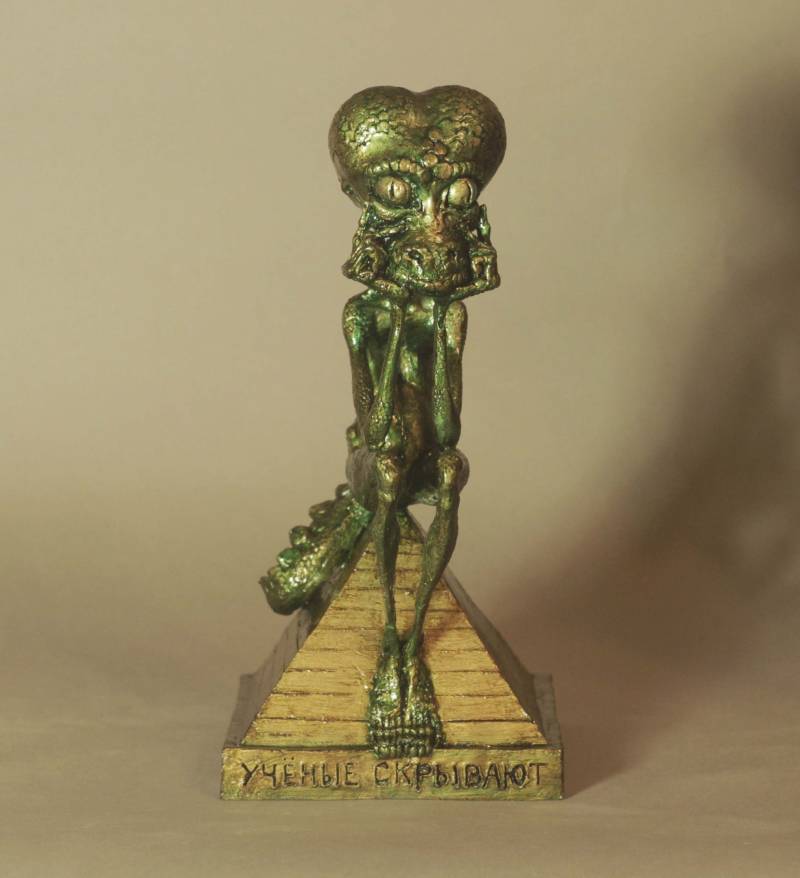 P.S. But still, remember that all this is not written "just like that." "And at gunpoint." In fact, scientists are really hiding everything and that is exactly how they are cracking down on everyone who brings them to clean water. Oh, oh, oh, oh!

Ctrl Enter
Noticed a mistake Highlight text and press. Ctrl + Enter
We are
Chernobyl notebook. Part of 3The hunt for the Blackbird
129 comments
Information
Dear reader, to leave comments on the publication, you must to register.