November 2 2017
22
The news, sad for the Kiev authorities, came from Tallinn, Estonia. The annual assembly with the participation of the heads of the foreign affairs agencies of the Eastern Partnership countries and a civil society conference took place here last Thursday. As part of these events, the agenda of the Eastern Partnership Summit of Heads of State, which will be held on November 24 in Brussels, was shaped, in particular. As a result of the discussion that took place, the so-called “Marshall Plan”, which provides for a program of financial assistance to Ukraine for the restoration of its economy, was not included. This was reported by the newspaper "European truth." 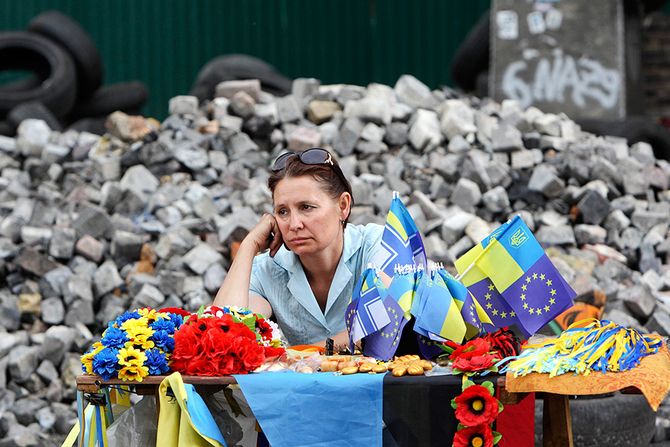 Lithuanian initiative has pissed off an EU official

The newspaper refers to the words of the European Commissioner for Enlargement and the Neighborhood Policy of Johannes Hahn. In Tallinn, Khan received the project “New European Plan for Ukraine” developed by the Lithuanian Seimas at the 2017-2020 in Tallinn from the Foreign Minister of Lithuania Linas Linkyavichus. The offer of the Lithuanians provides for the financing by the European Union of “modernization and economic development” of Ukraine in the amount of 5 billion euros per year.

Lithuanians are worn with this plan since early spring. They even began to call him in everyday life very ambitiously - “Marshall Plan” - by analogy with the American project of post-war economic recovery in Germany. According to experts, the self-interest of Vilnius, for which Russophobia has become the meaning of national policy, is to create a powerful outpost of the struggle against Russia in Ukraine.

The Lithuanian “Marshall Plan” for Ukraine caused frank irritation with the European Commissioner. As the “European Truth” noted, Khan “expressed doubt about the need for it (the“ New European Plan for Ukraine ”- ed.) For a country whose level of confidence in institutions is so low.” From this, the newspaper concludes: “The idea to hold a Marshall Plan donor conference for Ukraine at the beginning of next year, most likely, also lost its meaning.”

Johannes Hahn, meanwhile, remarked, “in a sense, the“ Marshall Plan ”is already in effect for Ukraine,” which is true. The first mention of such a plan dates back to the time of the reign of President Viktor Yushchenko. In 2007, a group of Ukrainian and Western politicians, officials, public figures was formed, which set a goal to develop a program of reforms designed to bring Ukraine out of the zone of economic cooperation with the countries of Eurasia.

In February 2008, the initiative group submitted its development (they were also designated as the “Marshall Plan for Ukraine”) for consideration by the US Agency for International Development and the Committee on Foreign Policy of the US Congress. Here the plan is stuck for a long time and this is why. The fact is that by that time the United States had already seriously invested in Ukraine. Through the programs of the US State Department and various funds, the support and development of community organizations and civil society structures were funded.

The plan of the initiative group repeated all this in a literal sense and was supplemented only by proposals to reform the system of educational institutions for children who lost their parents and support the development of small business through the provision of microcredits. Most likely, spending on these programs was not included in the plans of Washington officials and congressmen.

After the incident Maidan there were several private initiatives, positioned as the “Marshall Plan for Ukraine”, but all of them did not receive adequate support and further development. Because the International Monetary Fund and the World Bank are already involved.

These institutions of Western influence and their curators have their own vision of transformations in Ukraine and their instruments of coercion to the economic and social development of the country according to a Western model. Did not stay away from Ukraine and the European Union. Khan recalled this: "We have committed ourselves to provide 12,8 billion euros for reforms."

The result of the efforts of all these guardians about the future of Ukraine was the state debt that grew to 76,5 billion. The country has slipped into 80-place for the attractiveness of the business. In addition, she received a trade imbalance of the order of 500-700 million dollars. That is, in the international trade system Ukraine now consumes more than it produces. To cover this imbalance, Kiev borrows funds in the West.

The Lithuanian proposals, unlike other similar plans, are remarkable in that they are aimed exclusively at the modernization and restoration of the economy of Ukraine. Behind this lies the unpleasant recognition of the Baltic border fronts for Kiev, that the new post-mayor power has destroyed the country's economy. After all, so that Poroshenko’s propagandists do not broadcast there, 90% of the territory of Ukraine is outside the combat zone. There is no way to justify the devastation of war.

Having broken away (as it was conceived by the initiators of the strictly pro-Western orientation of the country) from Eurasia, Ukraine suffered significant losses. They are reflected in different numbers. Take, for example, ferrous metallurgy. It has always been an important export industry. On it, the Kiev authorities thought to enter Europe. Did not work out.

The Europeans did not need the products of Ukrainian metallurgists. The blockade in the Donbas has also broken fragile ties with Eurasia. As a result, this year the production volume of the Ukrainian ferrous metallurgy is only half of the highest 2006 performance of the year. Even in comparison with last year, the decline in production in this sector of the Ukrainian economy is estimated from 12 to 14%.

This is a common case. There are many private ones. Here is one of them. One of these days the Nikolaev shipbuilding plant stopped work. Company accounts are arrested. Only in terms of wages, the plant owed more than 58 million hryvnias. No funds to conduct production activities.

The reason for stopping the work was explained by the press service of the NHS: “The lack of state support for the strategic shipbuilding enterprise of the country makes it impossible not only to bring it out of crisis, but also threatens its functioning as a whole” The plant overwhelmed the maintenance of the unfinished rocket cruiser “Ukraine”, which had been planted at the Nikolaev shipyard more than a year ago 33.

The authorities in Kiev promised to compensate for these costs. Then I decided to remove the weapons from the ship, and sell the rest (for scrap) and pay damages. Later it turned out that the disposal of an unfinished ship requires new facilities, but they are not. After that, the bankruptcy of the oldest shipyard, founded in the eighteenth century, became almost inevitable.

On the eve of this sad event, the head of the trade union committee of shipbuilders in the local online publication “My City” announced the collective's intention to seek help from German Chancellor Angela Merkel and Pope Francis. Out of desperation, the Nikolaev poor fellows did not even realize that the industrial potential of Ukraine was not at all interesting for Europe.

As can be seen from the association agreement with the European Union, Europeans view Ukrainians only as buyers of their industrial goods. From Ukraine, they are ready to take only agricultural products, and, extremely low processing. Well, if it is just a grain of wheat, corn or sunflower seeds.

With these seeds, a special история. Ukraine is now exporting billions of sunflower oil. The geography of deliveries - from Iran to Algeria, including the countries of Eurasia. With Europe more difficult. Ukrainian oil is traditionally bought by Italians. The rest are ready to take only sunflower seeds (Brussels insists on this requirement), depriving Ukrainians of even such a penny processing.

The attitude of European officials to Ukraine, as their raw materials appendage, initially did not realize the Lithuanian initiative to modernize and restore the Ukrainian economy. It should be added to this that in Vilnius they simply do not realize the scale of the collapsed in Ukraine and its real potential.

This is for Lithuania 5 billion dollars - money. In Kiev, other appetites. Suffice it to recall how, in 2013, the Yanukovych cabinet swallowed 3 billion dollars in a Russian loan, and the economy did not even notice. At the beginning of the year, the need of Ukraine for finance to restore industrial potential was assessed by the Germans. Analysts from the CDU then agreed on the amount of 100 billion dollars.

Experts consider it clearly insufficient. Still, the fall in Ukraine’s gross national product turned out to be more than serious (from $ 173 billion in 2013 to $ 93 billion in 2016). To restore the Ukrainian economy, it will take twice as much money as the Germans counted. There are no people willing to give such money either in Europe or across the ocean. True, the West is not ready to push Ukraine away from Ukraine. It was not by chance that the European Commissioner Khan, having calmed down after the first shock, softened his rhetoric.

“It is not beneficial for us that our neighbors are poorer than European citizens,” Khan said later, “we want the Ukrainians to have the same level of well-being and prosperity. This contributes to democratic development and makes the country's market attractive. ” Khan even expressed his willingness to give Ukraine money, "but not without conditions."

The European Commissioner did not specify what amount can be discussed, but he demanded to ensure unconditional implementation of the agreements reached between Brussels and Kiev. The list of such agreements is large. But there is no place in it for an agreement on the restoration and modernization of the industrial potential of Ukraine. This problem does not bother Europe at all.

Ctrl Enter
Noticed oshЫbku Highlight text and press. Ctrl + Enter
We are
EU: For Ukraine, the Marshall Plan is already in forceList of CIA-funded Russian public organizations
22 comments
Information
Dear reader, to leave comments on the publication, you must to register.