November 1 2017
9
The CAA and VKS RF neutralized dozens of militants in Hama, a number of Deir ez-Zor neighborhoods were cleaned of terrorists from terrorists, reports FAN with reference to Syrian sources. 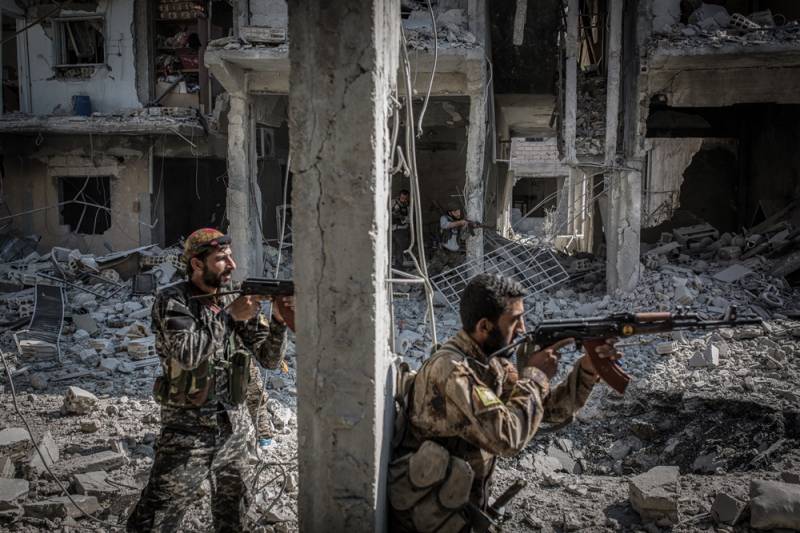 In the province of Damascus, the confrontation between the Syrian Arab Army (CAA) and radical groups continued for a day. Government forces are launching rocket fire against fortified opposition groups in the Jobar, Ain Tarma and Beit Naim areas. Militants fired mortar shelling of Al-Amin city of Damascus, 13 civilians were injured. Several shells fell in the Al-Abbasin area, damaging the urban infrastructure.

The Syrian Arab Army (CAA) continued to conduct shelling of fortified militants of radical anti-government forces south of the city of Aleppo. 1,7 tons of humanitarian aid from Russia were delivered to Abu Macbara, Aleppo province. Residents of the settlement received food and essential items. In addition, Russian doctors assisted 156 to local residents, including 89 children.

The Syrian army continued to attack the positions of the IG terrorists (grouping is prohibited in the Russian Federation) in the area of ​​the T-2 station in the south of Deir ez-Zor province. Under the cover of the Russian Aerospace Forces, the troops advanced seven kilometers to Abu Kemal, clearing the territory from the IG on their way. There were clashes in the very administrative center of the region. The Syrian army, with the support of its allies, liberated the area of ​​Rasaf, Al-Kanamat quarter and the territory of the old airport from radical Islamists. The Islamists suffered significant losses in technology and manpower.

The Russian submarine Velikiy Novgorod carried out the launch of Caliber missiles from the Mediterranean waters at key IG facilities in the Deir ez-Zor province. As a result of the strike, control points, an IG weapons depot in the area of ​​the city of Abu Kemal, as well as a fortified area, in which a large number of militants were at the time of launch, were destroyed.

The Western coalition sent a batch of construction equipment to Raqqa, which will be used in clearing rubble. Civic Council of the city said that the restoration of infrastructure will begin within a week. Recall that as a result of the actions of the Kurdish militia and the bombing of the coalition air forces led by the United States, about 80 percent of Raqqi turned into ruins.

The Syrian army, with the support of the Russian Aerospace Forces, destroyed a group of militants near the village of Al-Shahkhatiya in the north-east of Hama province. The settlement passed under the control of the CAA and the Allied forces. Later it was reported that new territories north of Rasm al-Sari and Rasm al-Sawan had passed under the control of the Syrian army. Also in the east of the province, the Syrian army, under the cover of the Russian Aerospace Forces, established control over the settlements of Jabb al-Jamlan and Rasm Mayal. Syrian military found warehouses weapons and ammunition groups IG. In addition, the position of Islamists in the vicinity of the Al-Houash settlement in the Sahl al-Gab valley was under the fire of government forces.