"Typhoon" will pop up from the sky: disclosed the characteristics of the newest Russian armored car for the Airborne Forces

November 1 2017
23
At the Interpolitech exhibition in October, the newest Russian armored car, the Typhoon Airborne Forces, was presented. However, he was not accompanied by any information about the technical characteristics. About how this unique car was created and what it is capable of, the site of the TV channel “Star” was told by the candidate of military sciences Sergey Suvorov. 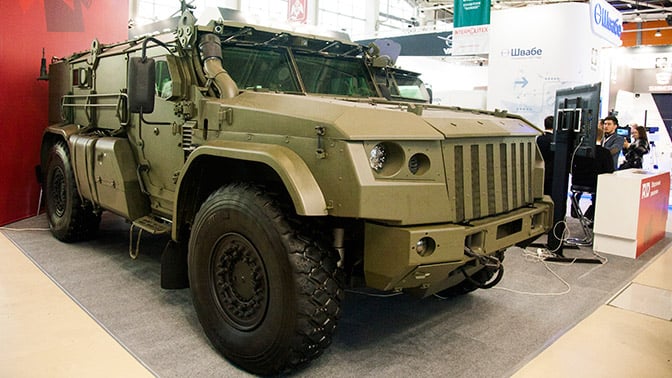 In December 2015, the commander of the Airborne Forces (Airborne Forces) Colonel-General Vladimir Shamanov announced that the Typhoon design and development work was open to the Airborne Forces. As part of this work, it was planned to create an armored vehicle with a wheel formula 4х4 with a capacity of six to eight people and a total mass of the order of 11 t.

Read the full article on the site "Star" - "Typhoon" will pop up from the sky: disclosed the characteristics of the newest Russian armored car for the Airborne Forces
Ctrl Enter
Noticed oshЫbku Highlight text and press. Ctrl + Enter
We are
A great interview with Sergey Lavrov: about Ukraine, Obama and IranWhat you didn't want to know about England
Military Reviewin Yandex News
Military Reviewin Google News
23 comments
Information
Dear reader, to leave comments on the publication, you must to register.