Self-determination up to extermination The liberation movement is conducted according to the instructions of the metropolis. 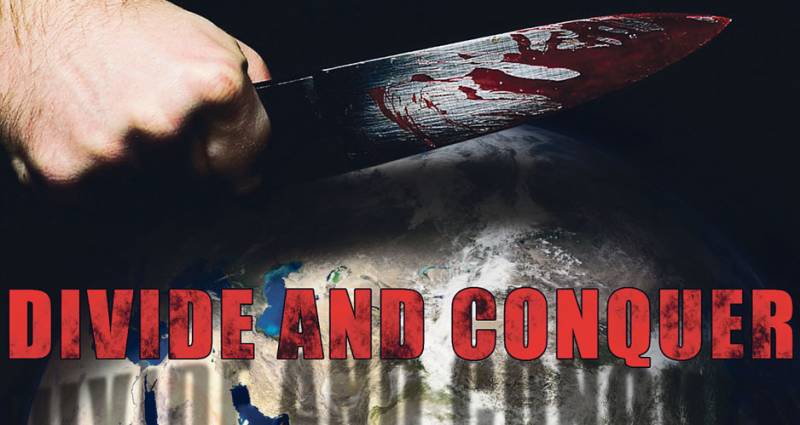 After World War II, the cause of most conflicts in the world was the struggle for independence from the colonial regimes of the West and Japan. With the achievement of formal independence, new states received a different kind of imperialist domination - the neo-colonial regime, in which the United States and its European allies imposed economic exploitation on their vassals.

With the emergence of the unipolar global domination of the United States following the collapse of the USSR, the West established hegemony over Eastern European countries. Some were fragmented and divided, and then new dwarf states were placed in submission to NATO.

The pursuit of a unipolar empire launched a series of wars and ethnic conflicts in the Middle East, Eastern Europe, the Balkans, the Baltic states, North Africa, Asia and Western Europe. These processes led to ethnic cleansing and massive crises with global refugee flows. Across the globe, the process of destruction of nation states has spread, rhetoric and a policy of self-determination replaced the class struggle as a means of achieving social justice and political freedom.

Many of the supporters of building a new empire have adopted the tactic of "divide and rule". It uses the liberal argument of “promoting and maintaining self-determination”, but no one bothered to clarify who the “self-determinants” represent and who actually turns out to be a beneficiary.

The struggle of people was divided according to group, regional, religious, cultural and ethnic characteristics. In contrast, “central” governments struggle to preserve “national unity” in order to quell uprisings in the regions.

One of the most striking aspects of the process of globalization and the development of nations is uneven and co-development.
The imperialist states concentrate industry, commerce and banking, while the neo-colonized countries remain resource-oriented, export-oriented enclaves tied to assembly plants. The government and the administrative apparatus, including the armed forces, the police and tax departments, are concentrated there in economically unproductive central cities, and the politically weak, but wealth-producing regions are subject to economic exploitation, marginalization and depletion.
This uneven and joint development at the international and national level led to an increase in class, anti-imperialist and regional struggle. Where class struggle weakened, ethnic leaders and movements gained more political weight.

On nationalism, the view is twofold. In one version, Western-backed national movements are working to weaken anti-imperialist regimes. In the other, secular, broad-based nationalist movements are struggling to achieve political independence, seeking to defeat the imperialist forces and their local supporters, who are often ethnic or religious minorities oriented to rent-seeking for the supreme rulers.
Empire-states have always had a clear idea about the nature of different types of nationalism and about whose interests each of these types serves. Empires support those nationalist manifestations that undermine anti-imperialist movements, regimes, and regions. And they always oppose nationalist movements, in which leadership in the face of the working class is strong.

Imperial Albion - the United Kingdom - massively destroyed and starved millions of people who opposed his rule in Asia (India, Burma, Malaya and China), in Africa (South Africa, Kenya, Nigeria, etc.) and in Europe (Ireland) . At the same time, the British imperialists encouraged regional conflicts by arming the Muslims so that they would fight the Hindus, and the Sikhs to fight the Muslims. They formed various religious, ethnic, and linguistic groups to conduct combat operations throughout the Indian subcontinent, in Burma and Malaya. Similarly, Britain encouraged conflicts between religious and secular nationalist and conservative groups throughout the Middle East.

The imperialist powers always use the divide-and-conquer strategy. In this case, they label the opponents backward and authoritarian. But to their protégés, they assign the titles of freedom fighters, who, they claim, are in the process of transition to Western democratic values.

However, the strategically important question is how the imperialist states determine which type of self-determination to support and which to suppress. And when it is necessary to change political approaches. Today’s allies in the Western press are called democrats, but tomorrow, if they act against the interests of the imperialists, they may be credited with the role of enemies of freedom and supporters of authoritarianism.

In contrast to the imperialist practice of transition to overwhelming and dominant regimes, as well as to separatist movements, most of the left in the bulk support any movement for self-determination and hang all opposing labels as oppressors. As a result, the left and the imperialists may end up at the same time in the campaign for regime change. Left-wing libertarians conceal their idealism, hanging on the imperialist powers hypocrites label and using the term "double standard." This accusation is ridiculous, because the main principle of the adoption of decisions concerning the imperialists support or suppress self-determination of the next movement based on class and imperialist interests. In other words, when self-determination serves the interests of the empire, it receives support. Specific examples are the myths about "Kurds, deprived of statehood" and about "Ukrainian liberation."

In the twentieth century the Kurds - the citizens of Iraq, Turkey, Syria and Iran - have tried to achieve self-determination, and fought against the established nation-states in the name of ethnic liberation. In the case of Iraq in 90, the Kurds sponsored, armed, financed and defended the United States and Israel to weaken and divide the secular-nationalist Iraqi Republic. And the Kurds, with the support of the United States, have organized regional conflicts within Turkey, and recently and within Syria, in order to defeat the independent government of Bashar Assad. Left-wing Kurds cynically call their imperialist allies, including the Israelis, progressive colonialists.

In short, the Kurds are now in the interests of the US and Israel. They provide mercenaries, access to military bases, listening and spying points and other resources in the newly “liberated (and subjected to ethnic cleansing) country” in order to strengthen US imperialism, which their “combat commanders” have chosen as the dominant partner. Is their struggle a national liberation or are they puppet mercenaries serving the empire?

In Ukraine, the United States welcomed the process of self-determination, organizing a violent coup d'état to overthrow the legitimately elected government, which sought independence from NATO. The States supported this coup in the open, financed and trained the fascist gangsters, who set themselves the goal of expelling and repressing ethnic Russians and Russian-speakers, especially in the Donbas and Crimea. Their goal was to locate NATO bases on the border with Russia.

The predominantly Russian-speaking people of Crimea opposed the coup and exercised their right to self-determination by voting for reunification with Russia. Similarly, the industrial Donbass region declared autonomy opposing oppressive and absolutely corrupt regime, the introduction of the United States.

The violent coup d'etat in Kiev, sponsored by the United States and the European Union, was an arrogant form of imperialist annexation. At the same time a peaceful vote in the Crimea and the armed realization of the right to self-determination in eastern Ukraine is a response from the progressive anti-imperialist forces. When their project to transform the Eastern Ukraine and Crimea into a launching pad for aggression against Moscow fell, the USA and the EU condemned the response as "Russian colonization."

In western China — in Tibet and Xinjiang — separatist groups have been setting up armed uprisings for many decades. And although they declared independence from one and all, their feudal lords - they are also militant commanders - were always hostile to the positive results of the Chinese revolution, including the abolition of slavery in Tibet, the ban on opium trade, the end of bribery and the spread of universal education to Muslim regions And although the West advertises the Dalai Lama as a peace-loving saint who gives banal speeches to enthusiastic crowds, he never condemned a single US genocidal war against his Buddhist co-religionists in Vietnam, Korea and other countries. A well-funded scheme, including pro-Tibetan and pro-Ugur western celebrities and the “victims” they protect, shows what the relationship between the Dalai Lama and his imperial patrons really are.

After World War II, Yugoslavia, liberated by communist partisans from the power of Nazi collaborators, planned to become a peaceful, independent country with a multi-ethnic society. But in 90, with the help of an open military intervention by NATO, the experiment to create a multinational socialist state in Europe was destroyed. After a mass ethnic cleansing of the non-Albanian population, a tiny state was created - a NATO-Kosovo puppet. It fell under the control of internationally recognized terrorists, white slave owners and drug dealers, vassals of the United States, Hashim Thaci and his bandits from the Kosovo Liberation Army.

Ctrl Enter
Noticed a mistake Highlight text and press. Ctrl + Enter
We are
The structure of world dominationMilitary reform as an integral part of the security concept of the Russian Federation: Systematic dynamic assessment
10 comments
Information
Dear reader, to leave comments on the publication, you must to register.