November 2 2017
16
Washington has notified Moscow of the start of the US Global Nuclear Thunder drills. By the recent US and NATO nuclear maneuvers in Europe, the Pentagon did not attract such attention. What is the purpose of testing the US atomic arsenal, in what condition is this arsenal, and what are the Washington strategy most afraid of? 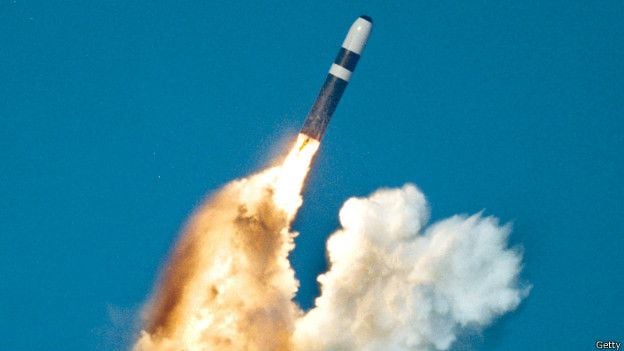 The “Global Thunder” scenario provides for “various strategic threats” for the USA and uses all the possibilities of STRATCOM. During the maneuvers, the US Army will work out the actions of space forces, surveillance and reconnaissance systems, global strike systems and missile defense systems, as well as “cyber capabilities”. "These exercises provide an opportunity for STRATCOM and its units to prepare for the prevention and, if necessary, repelment of a military attack on the United States, using forces at the direction of the president," RIA quoted "News»A statement by a representative of the US Strategic Command.

“Such events are held in America without real launches of intercontinental ballistic missiles and are in the nature of command and staff training. The system of running control, bringing signals to the executors, units and formations in whose hands there are strategic nuclear forces (SNF) are being checked, as well as the readiness of all military authorities to accomplish tasks, ”military expert, Chief Editor of Arsenal Fatherland magazine told the newspaper VZGLYAD. Victor Murakhovsky. Such an operational plan for the possible use of strategic nuclear forces and the readiness of all authorities to act in accordance with this plan is adopted annually, the expert said.

“Thunder” in America, “Noon” in Europe

STRATCOM reported: Washington warned Russia about the “Global Thunder” in accordance with the provisions of the START-3 treaty. The agreement, signed in 2011, by Dmitry Medvedev and Barack Obama, implies that the parties are obliged to notify each other about major nuclear maneuvers. At the same time, China, as a country that did not sign such an agreement, did not keep up to date.

New high-profile statements on the North Korean issue have become the backdrop for US nuclear exercises. On Monday, NATO Secretary General Jens Stoltenberg at a meeting with Japanese Foreign Minister Taro Kono stressed that the DPRK nuclear program is a threat to the whole world. Pentagon chief James Mattis, being “next door” on Saturday in Seoul, said that Washington “would never take for granted” the nuclear status of North Korea.

In turn, Moscow has recently expressed concern that more and more non-nuclear NATO countries are being involved in the exercises of the alliance with a nuclear component. This contradicts the basic articles of the Non-Proliferation Treaty, Russia's Permanent Representative to NATO, Alexander Grushko, said.

Almost immediately after the completion of the Russian Zapad-2017 exercise, in mid-October, NATO conducted Steadyfast Noon (Steadfast Noon) maneuvers in Europe to test a nuclear attack against a potential enemy. These maneuvers, unlike the current Global Thunder, in the Pentagon decided not to attract undue attention. RISI expert Sergey Yermakov noted in his comment to the newspaper VIEW:

“Americans are expanding the role of their allies in conducting nuclear operations. This time the Poles and the Czechs joined the teachings.

Moreover, the Czechs, as far as I know, were the first time involved in the immediate development of such nuclear operations — the fighters of the Czech JAS-39 Gripen Air Force were involved there. ” It is known that the exercises included maneuvers at the Kleine Brogel air bases in Belgium and Büchel Air in Germany, where the USA deployed its B61 nuclear bombs. Note that bombs of this type were adopted by the United States and NATO back in 1968 year. The US nuclear stockpile needs refreshment, according to Washington.

Not an expansion, but an arsenal upgrade

At the moment, the United States has 1411 deployed nuclear warheads (from Russia - 1765). The US has 673 operational deployed carrier of nuclear warheads. This is a "nuclear triad": intercontinental ballistic missiles, heavy bombers, ballistic missiles on submarines. Russia - 523 such media. On the whole, the United States has 820 deployed and non-deployed launchers of the “nuclear triad”, and Russia has 816.

Two weeks ago, Donald Trump refuted earlier reports that the White House intends to increase the nuclear arsenal by 10 again (allegedly because of this, Secretary of State Rex Tillerson called the US President a “dummy”). The Pentagon doesn’t really have plans to increase the volume of nuclear weapons, according to Defense News analytical portal. The publication notes: in fact, the US military can barely maintain the existing arsenal, which in some respects "almost decrepit" (the age of its contents may go back several decades).

Therefore, in the coming decades, Washington plans to spend hundreds of billions of dollars on upgrading “from top to bottom” or updating the nuclear triad, as well as their command and control systems. Congress was considering spending 1 a trillion dollars on upgrading nuclear forces.

In early November, it became known that the US Air Force wants to get at least 400 intercontinental ballistic missiles (ICBM) of a new generation, to ensure the protection of American territory from possible nuclear strikes up to 2070 year. Proposals from three companies - Northrop, Boeing and Lockheed. Discussion and replacement of ground-based ICBMs Minuteman III. The Minuteman 400 is now located in the North Dakota, Montana, Colorado, Wyoming and Nebraska mines.

Note that American strategists believe that the arsenals of potential adversaries - Russia and China - were ahead of their “Minutemen” in their development. This was indicated, in particular, by Lieutenant-General Jack Weinstein, deputy chief of staff of Strategic deterrence and integration in the field of nuclear weapons. “Solid-fuel missiles are becoming obsolete. It is necessary to improve the guidance system in order to weapon corresponded to modern combat conditions ", - quotes the lieutenant-general edition of The National Interest. However, do not underestimate the possibility of the American arsenal.

Elements of the Cold War are coming back.

"The state of the US nuclear forces is quite adequate," said military expert Viktor Murakhovsky. The interlocutor explained:

“They are in combat readiness as a ground component, I mean the 8 Army (which includes ground-based ICBMs“ Minuteman III ”) and the naval component, which is represented by nuclear submarines with ballistic missiles. The United States has minimized the role of the air component. He occupies an insignificant place among them, rather a symbolic one. ”

The US has a highly developed missile warning system, above all its space component, Murakhovsky said. They have a highly developed system of combat control of strategic nuclear forces. They constantly maintain it at a fairly high technological level, the source added.

“The recent trend is the techniques of conducting the so-called strategic operations, when both the nuclear and non-nuclear components are involved, when much attention is paid to conducting information operations,” said Sergey Ermakov, RISI expert, in turn. “What worries our country is the combination of strategic nuclear strikes with a“ fast global strike. ” These are non-nuclear forces and means that should be used to solve the same strategic tasks as nuclear ones. ” “This can seriously lower the threshold for the use of nuclear weapons and will provoke an escalation of conflicts,” he added. The Russian Defense Ministry criticized the plans of the Pentagon to create promising strike systems of an instant global strike.

“The elements of the Cold War are coming back. For example, for the B-52 bombers, a daily alert system was introduced, that is, during 24 hours after receiving an order, these aircraft must be able to perform combat missions. This is a reaction to the increase in the military potential of Russia and China, ”said Yermakov.

Russia, in turn, is conducting a substantial modernization of its strategic nuclear forces, with all components of the triad: land, submarine and air, said Viktor Murakhovsky. “However, the issue is that by the number of carriers, by the number of nuclear warheads, both the USA and Russia are limited by the treaty,” the source indicates. - The recent training conducted by the Supreme Commander showed that all components of our strategic nuclear forces are in combat readiness. And, actually, not so long ago, the commander of the strategic missile forces said that 96% of our ground-based ICBMs are constantly on alert. ”

Ctrl Enter
Noticed a mistake Highlight text and press. Ctrl + Enter
We are
Military reform as an integral part of the security concept of the Russian Federation: Systematic dynamic assessmentIs China's Nuclear Power Ally or Enemy? ("Defense News" USA)
16 comments
Information
Dear reader, to leave comments on the publication, you must to register.