Restoring Donbass. For two, but today ...

November 1 2017
22
Three and a half years after the beginning of the civil war in Ukraine, independent economists presented a fresh report on the level of economic damage caused by the armed conflict. The question in the study was asked as follows: how much money specifically needs to be invested in the Donbass today in order for it to be fully restored. For obvious reasons, the study contained an important nuance - taking into account the complete and final cessation of hostilities. That is, for analytical calculations, a model was created that considers the world in the Donbas - a hypothetical world and the model, respectively, is also hypothetical.


So, "the war is over - it is necessary to restore." How much would it cost today and where to look for resources (financial, human, other)?

Yasinovataya, northwestern, northern and western districts of Donetsk, Uglegorsk, Debaltseve, Lugansk suburbs are territories in which, according to approximate data of the authorities of the people's republics, more than 2014 of thousands of various buildings were destroyed, partially destroyed or damaged in May constructions. Among these buildings are not only high-rise residential buildings and small private households, but also educational facilities, healthcare facilities, transportation hubs, sports facilities, electricity generation facilities, coal mining, water supply, control systems,. Over 12, the buildings of schools and hospitals were actually re-arranged again - not without humanitarian aid from Russia. Moreover, they were restructured several times, taking into account the fact that the Ukrainian security forces inflicted new and new blows on the repaired objects from all available calibers. 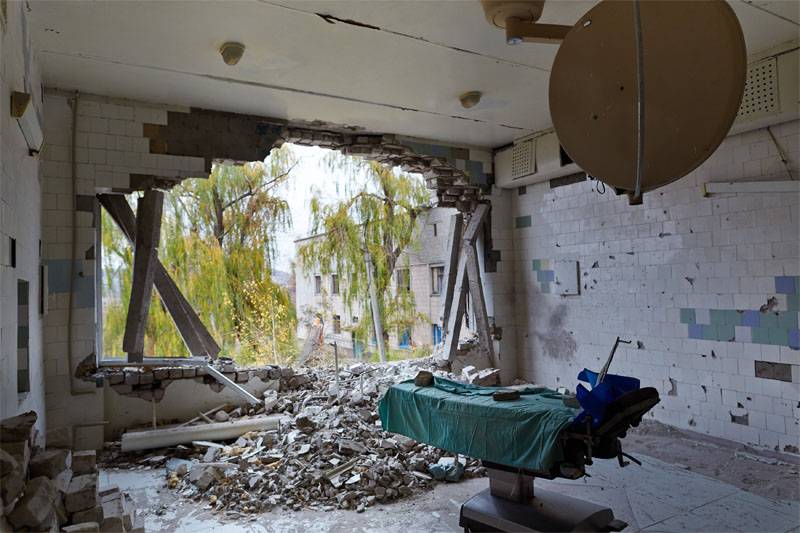 If repair and restoration work begins now, then at least Donetsk buildings and structures will need at least 40 billion rubles to restore. This is the most conservative estimate. Speaking about the situation with the total restoration of the entire destroyed infrastructure of the DPR and the LPR (including housing facilities), economists speak of the importance of at least 10-12 times more.
In other words, 400-500 billion rubles. These funds include such segments as Donetsk Airport and Donbass Arena. In particular, the construction of the aforementioned Donbass Arena, together with the entire adjacent infrastructure, at one time cost Mr. Akhmetov approximately $ 0,4 billion. At the current rate, about 24 billion rubles.

That is, up to 500 billion rubles - and this taking into account the fact that construction materials will be mainly provided “on site”. That is, their main volumes will not have to be transported from territories located hundreds of kilometers from the republics.

The lower level of investment in the restoration in the direction of "construction and repair" is declaratively defined. But the whole problem is that the restoration of Donbass today is not only a “construction” and “painting” business. Recovery, for obvious reasons, also concerns tens of thousands of jobs. For three and a half years since the beginning of the conflict, the republic's industrial production sectors have lost the lion’s share of capacity. The total exodus of the population began - in search of work. Up to 80% of qualified specialists and workers who left, they left for Russia. Over 55 thousands of jobs have been lost only in the transport and energy industries. In total, over a million people left the republics (on a permanent basis).

According to the latest estimates, the population of Donetsk and Luhansk people's republics (as of 1 in September of 2017 of the year) was about 3,5 million people. In order for the bulk of the workers who left the war to start working on the economy of Donbass again, a program is needed not just to restore industrial, transport, generating, banking and other links. A program is required to literally restart the entire regional economy. And these are dozens of enterprises, including mines, steel mills, power plants.

Restoration of one large metallurgical plant with the renewal of trade and economic ties that have been lost since the moment of the Maidan Peremoga is one billion dollars. Total investment in the full restoration of all that is lost in the industry during the war years is no less than 20 billion dollars. And this is more than 1,1 trillion rubles to those 500 billions, which were discussed above.

Subtotal - 1,6 trillion rubles. This is comparable to the annual amount of investment in the economy of such a city as, no less, Moscow.

But 1,6 trillion rubles is not the final cost figure needed to restore LDNR to the level of the pre-war period. It is not final, for the simple reason that it does not take into account the funds that have already been invested to ensure the life of the region and that are mastered to the extent of skill, talent and strength by local governing structures.

For example, building a completely new logistics to change the routes of sending Donbass coal to the same Ukraine cost and is still expensive. On the one hand, investments in transport hubs for transshipment of Donbass stone "gold" in the border areas of Russia can be viewed as investments in the Russian Federation itself, but in fact they are already investments in an integrated system that can be further developed and developed. Up to 4 billion rubles only for the creation of new transport logistics for coal.

And there is also logistics for communications and mass communications systems, banking operations, building a new system of law enforcement agencies, special services and security agencies, the organization of local government taking into account the total Ukrainian blockade of Donbass. This work in LDNR is far from being completed. It continues, and therefore the total amount clearly exceeds for 2 trillion rubles (about 35 billion dollars). What is called, if at a minimum.

Against this background, a very original expert opinion came from Ukraine — not from anyone, but from the advisor to the country's president, Alexander Paskhaver. According to adviser Petro Poroshenko, one of the problems of Donbass today, even if you find the means to restore it, is (attention!) The population of the region.

From Easterhawer's statement:
After the return of Donbas to Ukraine, it will be necessary to focus on the main problems.

One of the problems Poroshenko’s advisor calls the “problem” of the following nature:
The destructive socially ill after the war, the population will slow down the already slow process of modernization of the country.

That is, Poroshenko’s entourage a priori states that even after the “military victory”, the Donbass is a “burden for Ukraine”.

This is to the fact that such a plan is often heard in our country: they say, Moscow took a wait-and-see attitude. It will wait, they say, when Kiev itself will attend to the economic recovery of the region, and everything will be great. But Mr. Paskhaver unequivocally says: that Moscow does not get any of this for the simple reason that Kiev does not intend to restore the Donbass under any circumstances. Even under those conditions, when Moscow, God forbid, of course, she will decide to hand over the LDNR “to Kiev mercy”. Already they say that the population, you see, is “socially sick”, and therefore, Mother Ukraine will slow down.

Will the West help Ukraine rebuild the Donbass? A rhetorical question when taking into account the mentioned 35 billion dollars in the bottom line. Already, for the issuance of a lesser amount of Poroshenko by tens of times, almost Gopak is dancing in the IMF or on the lawn in front of the White House. And then 35 billion "greens". Especially since Kiev has already been lucidly explained that it has already received the “Marshall-2 plan” ... They also ask: where is the money?

There is only one conclusion in the end: the war in the Donbass needs to be slowed down with all the tools available, since it will still be necessary for Russia, the Russian taxpayer, to restore the region. Well, do not leave the ruins and scorched earth as a “monument” to the fact that the ambassadors of Russia in individual countries can sometimes break away from reality and not catch mice at all ...

And if you continue to pull the Volcker by the tail, then 2 trillion today can turn into 4, and 5, and 10 tomorrow. Note that we are only talking about economics. After all, there is also a humanitarian component - the fate of people.

Paskhaver and Peter Alekseevich washed their hands now, and therefore they will do everything to make Donbass finally come off as a really unbearable economically and truly depressed region. And they are already doing it, and hardly without prompting from partners.