October 31 2017
101
The latest English Queen Elizabeth aircraft carrier can be adopted by the Royal fleet already in December of this year. According to navaltoday.com, the largest warship in stories The British Navy entered the second (final) stage of testing.


Final tests of the aircraft carrier should have begun last week. But because of the bad weather, they were moved, and the ship left Portsmouth only on October 30. The crew and acceptance team will spend weeks in the sea 5 – 6, after which the aircraft carrier Queen Elizabeth will return to the base, where the ceremony of its acceptance into the British Navy is scheduled for December 7. 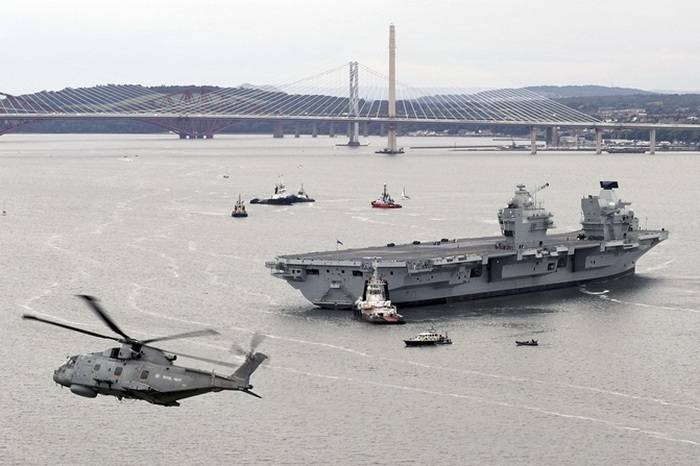 The aircraft carrier Queen Elizabeth was laid down in 2009, and on July 4, 2014, Queen Elizabeth II gave the ship its name, breaking a bottle of Scotch whiskey about it (in deference to the Scottish shipbuilders). The beginning of the sea trials was repeatedly postponed due to the failure of the contractors, however, in the British Defense Ministry they believe that the ship, as planned, will take up combat duty in the 2020 year.

The British aircraft carrier is smaller than its American "brothers"; it does not have a nuclear reactor, a catapult, and is almost three times cheaper than ships of the Gerald R. Ford type. The length of the Queen Elizabeth is 280 m, the width is 73 m, the total displacement exceeds 70 000 t. The ship can reach speeds up to 25 nodes (46 km / h), and its autonomy is 10 000 miles or almost 300 days of sailing, transmits "Warspot".

Ctrl Enter
Noticed a mistake Highlight text and press. Ctrl + Enter
We are
New British aircraft carrier completed the first stage of testingUnexpected guests in the control zone of the Pacific Fleet of Russia and the Chinese Navy. British AUG at the gates of the Great Pacific Game
101 comment
Information
Dear reader, to leave comments on the publication, you must to register.