October 31 2017
8
Indonesian Navy replenished with a new stealth frigate. According to the portal navaltoday.com, at the shipyard of PT PAL, located in the city of Surabaya, a solemn ceremony of transfer to fleet ship KRI I Gusti Ngurah Rai (tail number 332).


I Gusti Ngurah Rai - the second rocket frigate project SIGMA 10514 Perusak Kawal Rudal (PKR). The contract for its construction was signed in 2014 year, and today the ship, built with the use of technology to reduce radar visibility (stealth), officially became part of the Indonesian Navy. 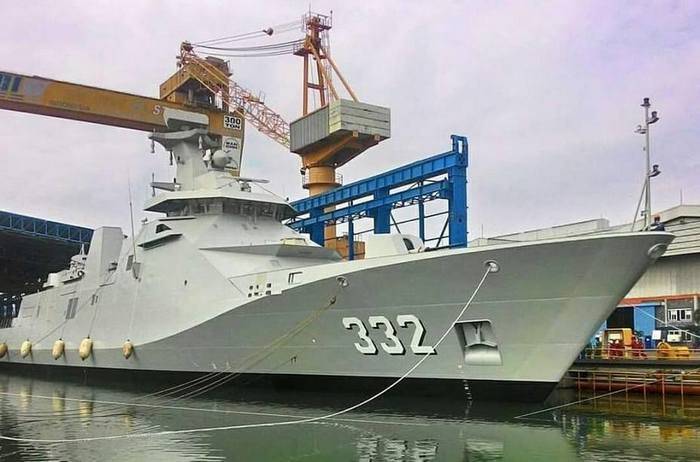 The frigate I Gusti Ngurah Rai is built on modular technology and consists of six large parts, four of which were made in Indonesia, and two - in the Netherlands. After all the hull elements had been delivered to the PT PAL Surabaya shipyard, they were put together and the ship was lowered into the water.

New frigates can be used in the open sea and deep-sea rivers. The ships have 3D radars with a detection radius of up to 250 km. Also on board SIGMA 10514 frigates are integrated electronic warfare systems, there are hangars and platforms for helicopters weighing up to 5 t.

SIGMA (Ship Integrated Geometrical Modularity Approach) corvettes were developed by the Dutch shipbuilding company Damen Schelde Naval Shipbuilding. Due to the modular design, these ships are built relatively quickly and can have different sizes and types of weapons. Thus, SIGMA 10514-type corvettes built for Indonesia are 105 m long and 14 m wide, and SIGMA 9813, purchased by the Moroccan Navy, are 98 m long and 13 m wide, transmits "Warspot"

Ctrl Enter
Noticed oshЫbku Highlight text and press. Ctrl + Enter
We are
In Indonesia, launched the frigate SigmaThe global crisis and the “yellow threat” led to the arms race of the countries of the Asia-Pacific Region. Part of 2
Military Reviewin Yandex News
Military Reviewin Google News
8 comments
Information
Dear reader, to leave comments on the publication, you must to register.