On the situation in the Rukban refugee camp (Syria). According to eyewitness 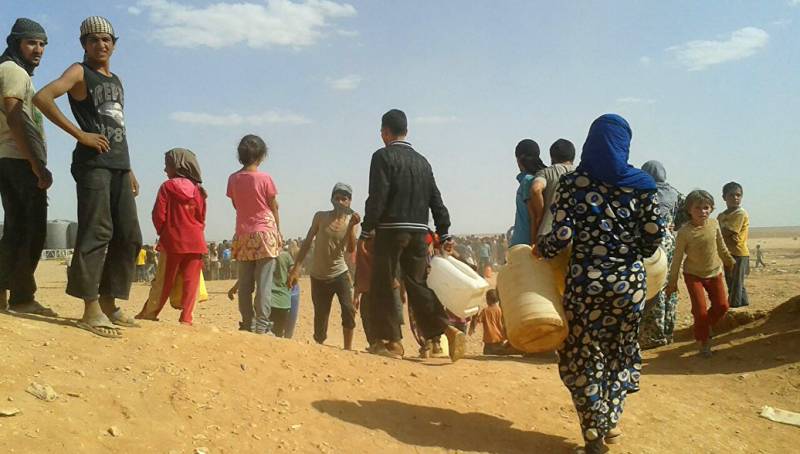 Syrian journalist Riyadh Farid Hijab publishes material on what is happening in the SAR. The material presented is devoted to the state of affairs in the so-called Rukban refugee camp and at the United States Al-Tanf military base. Riyadh was able to meet with a man who went through the “Rukban”, described as the most real filtration camp created in Syrian territory.

From the message of the Syrian journalist about this man (his name is called Mukhrez):
One day he heard about the camp “Rukban” - a place where at least you can find food. To my surprise, my interlocutor got there without any special obstacles. Through Facebook, he contacted a person who offered transportation services to this “heavenly place” on his page. And at one moment, an old Japanese SUV drove up to his house, in which several others were already sitting like Mukhrez. Upon arrival, he was immediately asked if he could use weapons and whether engaged in sports. Having received negative answers, "representatives of the camp administration" identified him to work as a trucker. What further predetermined his fate for several years ahead. For two years, he every day he cleaned cesspools and cleaned up trash of a different nature. In the tent camp there are mainly families of militants: women, children and old people. Like my interlocutor, the same "neumeyki", together with their families and friends, are engaged in all domestic issues: they cook food, clean the territory. Naturally, no one pays money. For inappropriate behavior, the guilty are punished with sleep deprivation and all sorts of physical refinements; an attempt to escape is punishable by death.

The following is a story about the Al-Tanf military base. According to the interlocutor of Riyadh, the base is intended for training militants by representatives of foreign armed forces and private military companies.

From the story:
He (Mukhrez) met his acquaintance by the name of Ahmad, who boasted that he was in the “Partisans of the Revolution” detachment and received good money for fighting against the “tyrant Asad”, putting up leaflets of the appropriate content in various cities.

It is noted that the US military are trying to do everything so that ISIS (* forbidden in the Russian Federation) defended the last stronghold of militants on the way to the Iraqi-Abu Kemal border. Now they are trying to transfer the militants to the sides of the forward parts of the CAA, moving along the Euphrates.

From the story:
It is quite logical that, with rare exceptions, few of the "moderate" wanted to go under the bullets of Assad troops and bombs of Russian aircraft. Among these was the familiar Mukhreza. Together with household waste, he had to take out several boxes with weapons, Ahmad and several of his comrades. Realizing that this is a chance to escape from the camp to my family and try to start a new life, my friend decided. Having gone on an ordinary trip to a landfill, he loaded several other people in the car apart from household garbage. After the garbage truck overcame the main roadblocks, one of the fugitives from Al-Tanf, who showed the way, got into the cabin to Mukhrez.

Riyadh reports that he managed to get away from the chase only because the camp management decided that only one truckman, who was not of particular interest, ran.

Author:
According to the materials of Riyadh Farid Hijab

Ctrl Enter
Noticed a mistake Highlight text and press. Ctrl + Enter
We are
December 2010 years. Russian March. Senseless and merciless? Notes not a Russian person
12 comments
Information
Dear reader, to leave comments on the publication, you must to register.