President Putin’s Statement on the Contract Army in Russia

October 31 2017
155
Once again, now from the mouth of the president, we learned about the upcoming abolition of conscription. Not tomorrow, not even the day after tomorrow, but the call will be canceled. Russia will fully switch to the contract army. Vladimir Putin 24 of October spoke unequivocally about this. Is it correct? Will the abolition of the appeal be able to maintain the country's defense and reduce the burden on the financial system? Or was the statement made in favor of a certain part of the “electorate” in the framework of the upcoming presidential elections in Russia? 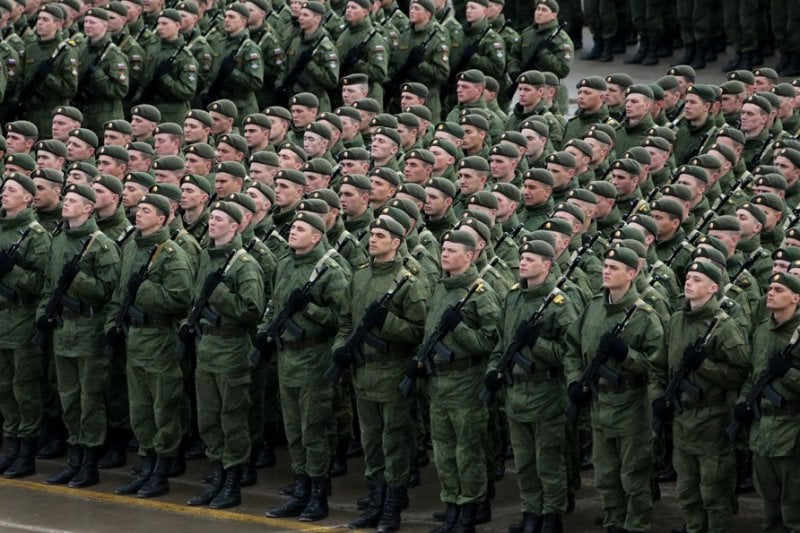 The question of a professional army is rather complicated for our country. How many arguments for and against we have already heard. And, most importantly, almost no one listens to the direct participants in the events, current officers and generals of the Russian army. Beautiful words about civil society and democracy have become the stumbling block about logic.

What today advocate a professional army? Alas, there is nothing new in this position. Remember, in the 90-ies among young people the most common opinion was: "Two years thrown out of life." And conscripts were hiding by all means from military registration boards. The police raided ambushes on the future defenders of the country. And on returning home they were looked upon as idiots. I could not "hang out", which means that either the moron or the beggar did not buy off ...

Today, at the highest level, they say that the best personnel should be protected for the development of the economy. There is nothing to do graduates in the army. For this there is a "people". Let's increase the allowance for contractors, and the "people" from the local hopelessness will go to serve. Any Vasya Pupkin from a Siberian or Far Eastern village, where to earn 20 thousand heroism a month, with a salary in 30-40 thousand, will gallop into a part at a gallop. Also, he will be entreated to be taken. Kneeling to stand.

It is clear that Muscovites or St. Petersburg for the money "can not buy." But there is also the "level of education"! It is there that the most necessary are concentrated for the development of the economy and something else there. Let them develop! Yes, and the health of these very Muscovites God offended. Every third "living corpse", according to Moscow medicine. And on the periphery live eagles! Slightly feed, that's all. Ready guardsman.

"The case of the contract army" began Yeltsin. With whom filing, I will not wang. I think most readers have their own opinions on this issue. What for? Official: to transform the Armed Forces into modern, well-trained military units. In reality: to destroy the mobilization resource preparation system developed in the USSR.

Even the first president called the deadline for the destruction of our army. By the year 2000. Thank you, pah, of course, the default of 1998. There was not enough money for this murder. But thoughts remained ... And plans remained ... And nobody canceled the first actions. Remember the 1993th? When was the first law reduced the service life for the first time? Up to 18 months in the ground forces and 24 months on navy.

So what is next? 2008 year! The dream of a soldier. A year of service, and you are superman. And those who want to get out of provincial poverty - on the contract. With all the ministers. And at Ivanov, and at Serdyukov, and at Shoigu. Today, army professionals are about 30%. About 300-350 thousand people. And in the future, the Ministry of Defense plans to bring this figure to 50%. And the rest?

President Putin is well aware that the existing system of training the army reserve does not work. What is a year of service for a modern soldier? This, sorry for the sharpness, a tour of the army for the younger student. 12 months consists of: month KMB, three months of the training unit, 8 months of real service in parts.

What, today recruits come to the service more prepared than in Soviet times? Do they have a higher level of education? Are they well trained in NVP schools? Are they very often athletes? Do they have military specialties, like chauffeurs or skydivers? And we turn this contingent for 8 months of service into a soldier?

I always find it funny when I hear an argument from supporters of a professional army that the Ministry of Defense itself refuses some of the recruits and is in favor of contract soldiers. What to do Shoigu? Under the existing situation, anyone would refuse, not that the minister, the commander of the unit. To fight with yearlings? Dismiss.

In Soviet times, when the level of training of recruits was much higher, a specialist or junior commander was trained for six months in the training unit. A simple soldier became a true soldier after a year. A year of intense training and education! Now the place of such a soldier should take a professional.

Many, especially from the category of lovers of all kinds of Wikipedia, talk about the experience of Western countries in creating professional armies. Won the Americans have such an army and are not particularly worried about their own defenses. Europeans went the same way. And, too, everything seems fine with them. Everyone does their own thing. Someone serves. Someone works.

Just what happens in the event of a real conflict? In the same Europe? How many professionals will remain in the army in a week? Month? They will be the first to go into battle. They are the first to take upon themselves the blow of all the power of the enemy. Or have we forgotten the lessons of the second world? Who started the war and who ended it. Not from politicians, from soldiers and officers. Started those who served in the army at that time. But finished the store! Moreover, look for losses by year of birth. Ending the war is no longer just storekeepers, but those who are behind 30. Twenty and slightly older beat out almost everyone at the beginning of the war.

Americans? And what tasks does the American army target? Why do Americans need such a powerful fleet and huge aircraft carriers? Why so many bases abroad? The US Army is not designed to defend its own country. This is a huge expeditionary force. The Americans firmly believe that they will be able to prevent the enemy from entering their own territory. Islander Syndrome.

And the expeditionary corps is needed from professionals. Our aircraft in Syria are also not "conscripts" staffed.

I understand people who advocate a professional army. Those whose standard of living is high enough do not want to "lose" time. Those who are timid, afraid of the difficulties of the army. Those who want to find a job more profitable, they want to quickly "accumulate experience." But I also understand that something needs to be changed in the training system of a soldier.

The restoration of initial military training in educational institutions and DOSAAF is a necessary step, but only a step. The increase in the life of the soldier is brewing. This is also an indisputable fact. Periodic fees "guerrillas" for retraining should be returned to the system. Perhaps, given the next "demographic hole", it is necessary to cancel delays from service, even for students. This practice was in the middle of 80's.

But, on the other hand, if President Putin mentions the issue of a contractual, professional army, then it is precisely this strategy of army development that our leadership chooses. Smoke without fire. And the terms of a complete transfer of the army to professional rails are not called just because the economic possibility of such an action is not clear yet. As soon as the situation with the economy stabilizes, these terms will be announced.

But how will we look if there is another conflict? The hope of a peaceful resolution of existing international disputes is the lot of civilians. The army in this matter is always pessimistic. The service is like that. Can we, while maintaining the existing situation, successfully repel the attack and start a retaliatory offensive by collecting reserves? Will we be able to maintain a professional army for the protection of dangerous areas in our territories? Questions, questions, questions ...

Ctrl Enter
Noticed a mistake Highlight text and press. Ctrl + Enter
We are
At the General Staff again, "the concept has changed"Serdyukov confused in the reforms
155 comments
Information
Dear reader, to leave comments on the publication, you must to register.