November 1 2017
9
Russian media often mention the name of Paul Craig Roberts (Paul Craig Roberts), cite him, reprint some of his articles. And yet this man deserves to be better known in Russia. Unfortunately, his books have not yet been translated into Russian. 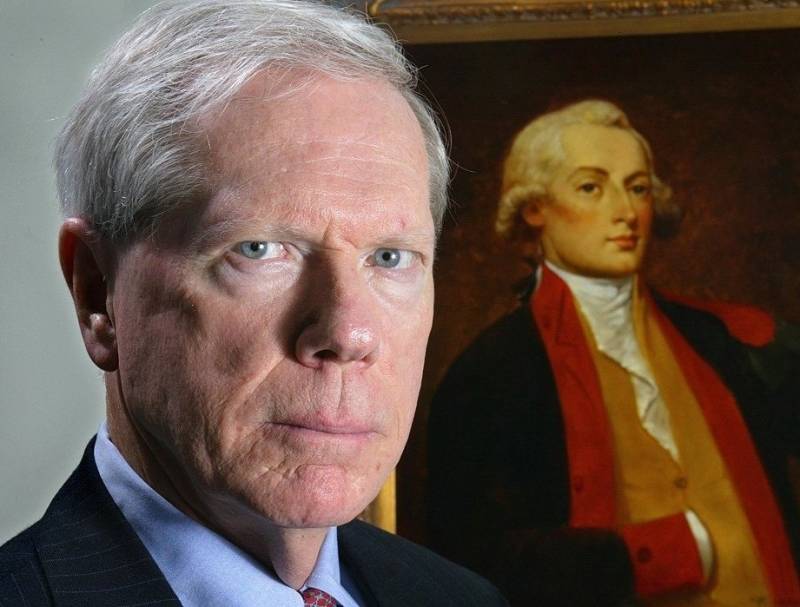 Paul Craig Roberts was born 3 on April 1939, in Atlanta, Georgia. He graduated from Virginia University, University of Oxford, Georgia Institute of Technology, has a doctoral degree.

Early began to try himself as a journalist. He collaborated with such reputable periodicals as The Wall Street Journal, Businessweek, The Washington Times, Scripps Howard News Service. At the beginning of 1970, Roberts began to publish the first books devoted to the analysis of the Soviet economy and the understanding of Marxist economic theory. From 1975 to 1978, Roberts worked in Congress, was an economic adviser to Senator Orrin Hatch (Orrin Hatch), an adviser to a member of the lower house of Jack Kemp (Jack Kemp). Kemp, along with his colleague Congressman Roth, initiated the preparation of a bill on tax incentives for the American economy. Roberts was entrusted with the development of this document. When Ronald Reagan became president of the United States, the bill, having received the support of two leading political parties, became law (The Kemp-Roth Tax Cut Act of 1981). In Russia, it is called the Tax Law to stimulate the economic revival of 1981.

Working in Congress, Paul Craig Roberts continued to collaborate with leading magazines and newspapers. In 1978-1980 was a columnist for The Wall Street Journal. At the same time, he conducted scientific work in the field of political economy (a rather rare area of ​​interest, since in most American universities political economy was replaced by economics); He was a senior fellow at the Center for Strategic and International Studies at Georgetown University.

The highlight of Roberts' career was his appointment at the beginning of 1981 to the post of Assistant Minister of Finance on economic policy.
President Ronald Reagan and then Finance Minister Donald Regan (Donald Regan) appreciated the contribution of Roberts to the formation of a new economic policy (reaganomics); The Assistant Minister was awarded the Ministry of Finance Meritorious Service Award. However, a year later, Roberts resigned and in 1982, he took the position of head of the William E. Simon Economic Policy Department at the Center for Strategic and International Studies. In 1993-1996, he is an honorary member of the Cato Institute (American research and educational organization of the libertarian trend). Until recently, remained a senior fellow at the Hoover Institution (Hoover Institution). In the 90-ies more than once entered the ratings of the best journalists in America.

At the beginning of the new century, criticism of senior American leadership intensifies in Roberts publications. The then US President George W. Bush was criticized. Claims against the president were set out in the 2005 year in the Six Point article. Roberts drew attention to the falsification of statistical data. In fact, there was no growth in the number of jobs in the economy; on the contrary, there was a withdrawal by American corporations of their industries outside the country, along with jobs. The illusion of economic activity inside the country was maintained by inflating the services sector, the real economy stagnated. Roberts stated that, contrary to official statistics, no increase in incomes of the population of America occurs, they grow only nominally, but in real terms they fall.

He also drew attention to such an unhealed wound of the American economy, as the negative balance of US trade. This “hole” was formed at the beginning of the 70s and has grown since then. Roberts emphasized that America imported 50% more than it exported, and the dollar exchange rate was artificially maintained. The depreciation of the dollar may increase as a result of the massive dumping of the American currency, which has accumulated mountains outside of America. A particular threat to America comes from China, which accounts for half of the entire US trade deficit and where the bulk of dollars accumulated. American “prosperity,” according to Roberts, is illusory, America lives in debt. At any moment, well-being can collapse.

Two years after the appearance of Six Points in America, the mortgage lending market collapsed and the financial crisis of 2007-2009 began, which spread to other countries. America has climbed out of that crisis, but all the negatives described in the Six Points remain in the American economy.

By the way, Donald Trump in his election campaign last year almost word for word repeated the provisions formulated by Roberts in the middle of the 2000-s.

Today, however, we see that the current president is not really able to fulfill any of the promises of his electoral economic program. “The owners of money” (they are the real owners of America) are not going to change the economic course of the country. Similarly, Roberts was blacklisted and excommunicated from America’s leading media.

He continued his work in the field of economic journalism in opposition media - both American and foreign. Among the Americans, CounterPunch can be mentioned, which its editors qualify as “revealing journalism from a radical perspective.” Another resource often featured by Paul Craig Roberts is the Canadian anti-globalization publication Global Research, which is led by Professor Michel Chossudovsky. Roberts has his own website, where each of the articles of this 78-year-old author testifies to his talent, amazing performance, cultural erudition (links to fiction, historical documents, scripture), proficiency in the word. And most importantly - each publication is permeated with a passionate rejection of lies, worries about the fate of America and the world, great sympathies for Russia.

The proposal-side revolution: an insider report on how politics was done in Washington // The Supply Side Revolution: (1984);

Line of new color: how quotas and privileges destroy democracy // The New Color Line: How to Destroy Democracy (1995);

The Crisis of Market Capitalism and the Economic Degradation of the West // The Failure of the Faith of the West (2012);

I confess that from the above list I managed to get acquainted only with two books.

To date, not a single book by Paul Craig Roberts has been published in Russia. This is a serious omission. In our country, his books would be no less popular than the "Confessions of an Economic Killer" by John Perkins or the "Committee of Three Hundreds" by John Coleman.

In recent years (after the financial crisis of 2007-2009), the main themes of Roberts' publications were: the permanent economic crisis in the United States; the social polarization of American society and the transformation of poverty into the mass phenomenon of American life; separatist tendencies and the threat of the collapse of the United States; criticism of the Federal Reserve System and its monetary policy; the expected collapse of the US dollar as a world currency; the destruction of the remnants of democracy and the violation of the US Constitution; increased violence and crime in America; the strongest influence of the Israeli lobby on the US political course; the transformation of the American state into the main terrorist in the world; Washington's impudent intervention in the affairs of Ukraine; the reckless nature of Washington’s economic sanctions against Russia; the legality of the return of the Crimea to Russia; the treacherous violation by the North Atlantic bloc of the agreements reached with Gorbachev at the end of the 1980s; the growing threat of a global thermonuclear war as a result of the seizure of power in America by fanatics and mentally ill people. And so on.

We can say that Paul Craig Roberts works in the genre of chronicles of modern American and world history. This unique chronicler speaks more and more openly that history can end. And the main blame for this lies with the US authorities - official and backstage.

Roberts believes that the hope remains to lay on Russia and China. Especially on Russia. With all the shortcomings of life in our country, it is Russia, according to Roberts, that can really withstand the murderous and suicidal policies of Washington.

The American “masters of discourse” infuriates the attitude of our hero towards Russia, he has already received the stamp “Kremlin agent”. However, not discouraged. At the end of last year, many American media reported a sensation: Paul Craig Roberts asked for Russian citizenship. On his website, he published an 28 on November 2016, a letter to Russian President Vladimir Putin. “The Washington Post exposed me as a Russian agent. I would like to ask you for the granting of Russian citizenship. ”

Roberts wrote that he was ready to become a "Russian agent," but he did not have "data on the level of payment for spies." At any moment, he said ironically, “The Washington Post can find out that we, along with a colleague — a KGB agent Reagan — cut taxes for the rich to make capitalism so depressing that the American people would rise and overthrow it. Well, then we fooled the left! ”Roberts expressed the hope that the Russian president would contribute in the search for a publisher who would help publish his memoirs titled“ The Life of Putin’s Puppet ”. So with his characteristic irony, Roberts reacted to the delusional accusations that he was "an agent of the Kremlin."

The Russian side responded to the appeal of Roberts to the President of the Russian Federation. Presidential spokesman Dmitry Peskov said that the Kremlin is ready to consider issuing a Russian passport to the former US Assistant Secretary of the Treasury for Economic Policy if all necessary procedures are followed.

Learning about the reaction of Moscow to his joke, Paul Craig Roberts promised to seriously consider the proposal.

Ctrl Enter
Noticed a mistake Highlight text and press. Ctrl + Enter
We are
Putin's final move, crushing the EU and NATOPaul Craig Roberts: "Gullible deception" will regret the Maidan to the end of life
9 comments
Ad