Exactly 140 years ago, 24 in October 1877 of the year, during the Russian-Turkish war, there was a battle to strengthen the Mountain Dubnyak, in which the Russians had won, but this victory went to an unreasonably high price.

The seizure of the Mountain Dubnyka was necessary to establish a complete blockade of the Turkish fortress Pleven, which the Russian command, after the failure of three attacks, decided to starve. Dubniak guarded the way of supplying food and ammunition to the fortress. It consisted of two earthen redoubts - large and small, as well as a lunette, connected by a trench with a large redoubt. The fortifications were defended by about four thousand Turkish soldiers and officers.

More than 18 thousands of bayonets and several artillery batteries were allocated to capture it. The main role in the upcoming case was to be played by the guard - the elite of the tsarist army, who had recently arrived at the theater of military operations. The operation was commanded by Adjutant General Iosif Gurko, nicknamed “General forward”, given to him for the fact that he preferred frontal attack to all types of military operations. In the same way, he decided to take Dubniak, despite the fact that similar tactics during the storming of Plevna had already turned into a series of defeats and huge losses.

Speaking to the soldiers on the eve of the battle, he said: “You guardsmen are better cared for than the rest of the army. Here is a minute to prove that you are worthy of these worries. Shoot rarely, but neatly, and when you have to go round you, make a hole in the enemy! Our "cheers" he can not stand. " And the guards proved ...

The attack was planned simultaneously from three directions in order to force the defenders to disperse forces. However, it turned out "as always": the central column, consisting of Life Grenadiers, came to its original positions before the others, came across the Turkish advanced guard and got involved in a shootout. Turks from behind the shafts of the small redoubt showered her with bullets from long-range breech-loading rifles, killing several dozen people.

The column commander, Colonel Lyubovitsky, on his own initiative, ordered the assault on the redoubt and, despite frequent fire, captured it. But at the same time, almost all the officers were beaten out in his detachment, and he himself was wounded in the leg. Nevertheless, inspired by the success Lubovitsky ordered the attack and a big redoubt, despite the lack of support from other columns. However, the Turks fought off the assault, inflicting heavy losses on the attacker. The remains of Lyubovitsky's column rolled back to a small redoubt.

Meanwhile, Major General Ellis’s right column launched a large redoubt attack from another direction. She had to walk almost a kilometer on a level “like a pool table,” according to one of the officers, a field devoid of any shelter. Because of the killing fire, the last 150 meters the soldiers could not overcome. The surviving commanders ordered them to lie down and dig in.

The situation on the left flank was even worse. where the column of General Rosenbach fell not only under Turkish bullets, but also under the fire of his own artillery, which, because of an error in aiming, covered the attackers with shrapnel. From the Russian cannons suffered great losses of the Life Guards, the Finnish regiment, which had the best rifle training in the Russian army.

Having fixed the error, the gunners moved the fire to the redoubt, but did not manage to cause him serious damage, as Gurko, who was in a hurry to finish the job before dusk, soon ordered a new assault. This time all three columns were supposed to attack synchronously, and three consecutive volleys of batteries of the left, center and right columns served as a signal for the attack.

However, for some reason, the battery of the right column fired first, although it should have fired last. Subsequently, the gunners justified themselves by taking the distant sounds of cannonade under Plevna as a volley of other batteries. The incident again brought confusion in the actions of the troops. Some shelves went ahead, others waited. Gurko had to send couriers to raise the delayed attack. At the same time, as he himself later admitted, he no longer had confidence in success.

The attack of the right and left columns was again repulsed, while the commander of the Finnish regiment, Major General Lavrov, was killed, who personally led the soldier. Only a few managed to reach the shaft of the redoubt and lie beneath it in the "blind zone". The soldiers, pointing their rifles up, began to shoot the Turks, who were trying to reach them, leaning out from behind the parapet.

Seeing that this assault did not succeed, Ghuroko, in desperation, sent his last reserve, the Life Guards Izmailovsky Regiment, into battle. Izmaylovtsy, lining up in ranks, with unfolded banners went forward under the drumbeat. Meanwhile, it was beginning to get dark and this complicated the task of the Turkish riflemen. The attackers, albeit with casualties, managed to walk to the rampart and lie beneath.

Despite the fact that the Russian soldiers closely surrounding the redoubt were much smaller than the Turks inside it, they nevertheless decided to continue the assault in the darkness. Climbing up the shaft, the Russians rushed to the bayonets. And then the unexpected happened - the Turks almost immediately began to give up. Obviously, they did not understand how small their forces were attacking. Soon the entire garrison of the redoubt, abandoning weaponraised his hands.

The saddest thing is that the losses in the capture of Mountain Dubnyk could have been avoided if the Russian command had relied not on the infantry, but on artillery. Indeed, in the Mountain Dubnyak there were no stone walls and casemates capable of withstanding high-explosive shells and mortar bombs for a long time. The commander of the Turkish garrison subsequently wrote: “We were very surprised to see that the Russians were going through, not having treated us with artillery beforehand. Meanwhile, after two or three hours of shelling from 50 – 60 guns, we would be forced to surrender without any damage for the Russians. ”

Nevertheless, the capture of Mountain Dubnyak was an important strategic success, which greatly complicated the position of the garrison of Pleven. Soon in the remaining fortress without supplies, famine began, and on November 28 (December 10 in a new style), she capitulated after an unsuccessful attempt by the Turks to break out of the encirclement. 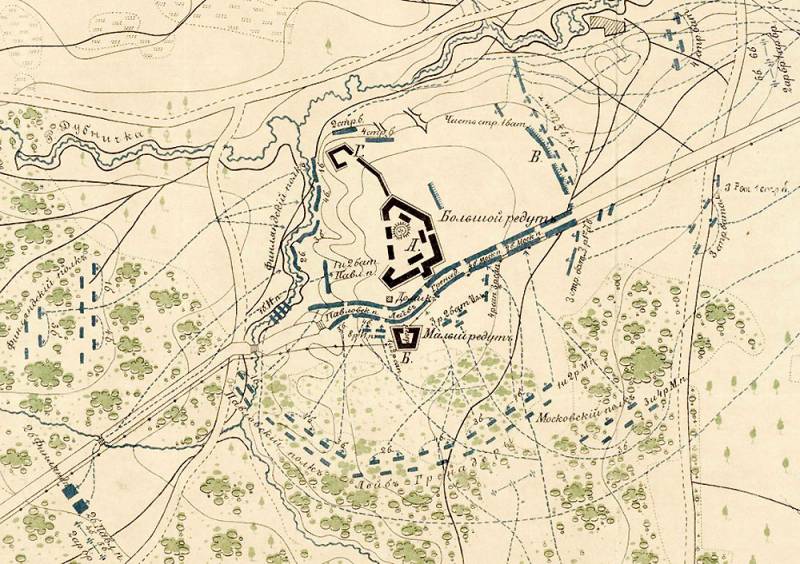 Map of the battle for Mountain Dubnyak. Shows the position of the troops before the last assault. 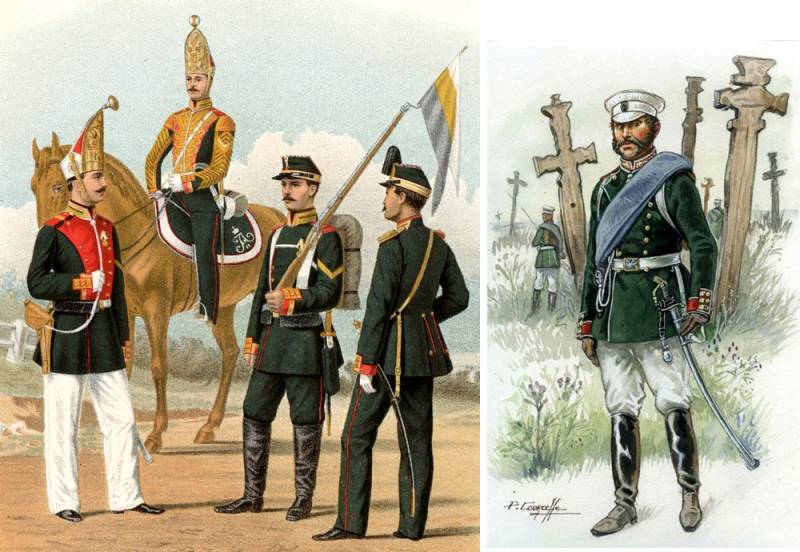 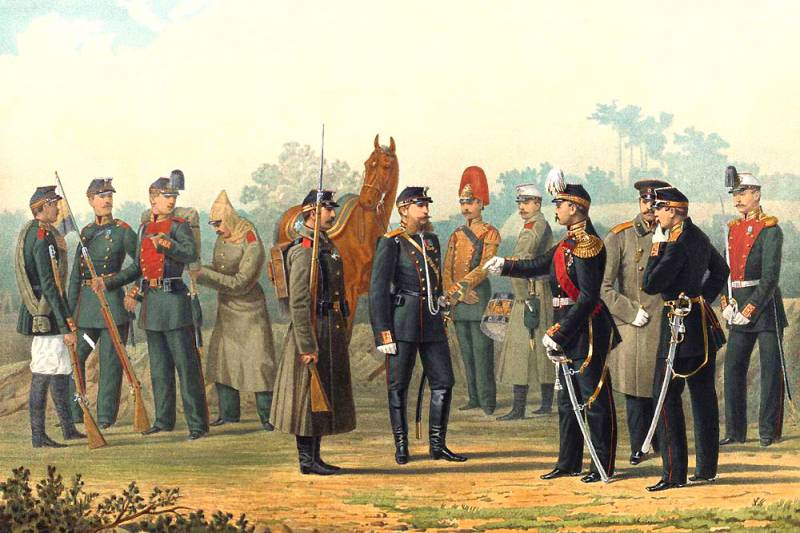 Soldiers and officers of the life guards of the Finnish regiment in ceremonial and field uniforms of the Russian-Turkish war.

Turkish Peabody-Martini breech-loading rifle. Most of the Russian soldiers who died while taking Mountain Dubnyk were killed from such rifles. 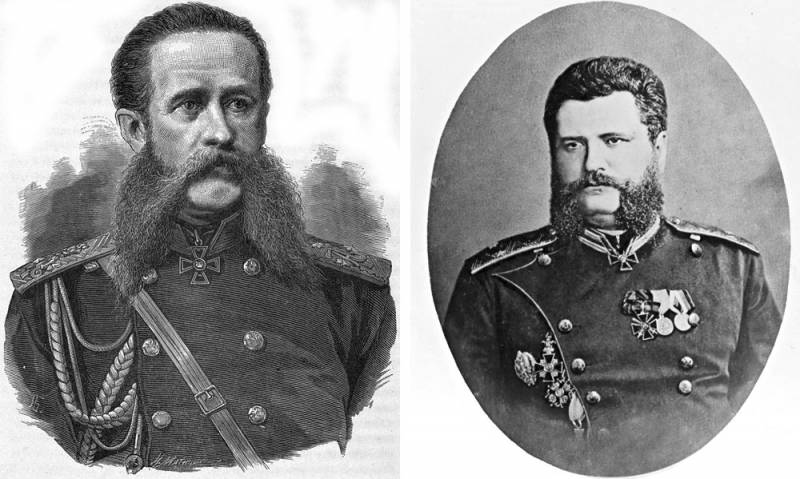 General Gurko, who commanded storming Mountain Dubnyak and died during the storming of General Lavrov. 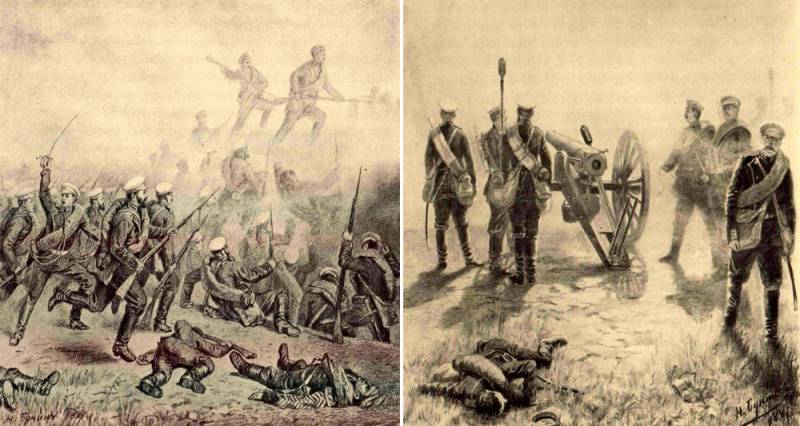 Scenes of the battle for Dubnyak Mountain. 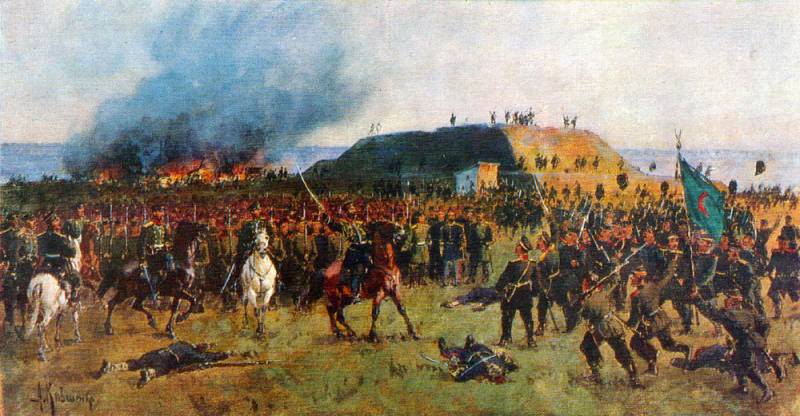 Troops with a captured Turkish banner greet General Gurko after the capture of a large redoubt. In this picture A.D. Kivshenko clearly shows that there are no traces of shelling on the fortification.

Ctrl Enter
Noticed a mistake Highlight text and press. Ctrl + Enter
We are
As Skobelev almost took PlevenHow "Leo Pleven" gave the Russian army a bloody lesson
39 comments
Information
Dear reader, to leave comments on the publication, you must to register.