October 31 2017
43
The explanatory dictionary of the Russian language may well be updated with the new term “puchdemon”. This word borrowed from Catalan in Russian would mean a person who literally proceeds to do something with “revolutionary” enthusiasm, agitates everyone to follow his example, and at the crucial moment hides “in the bushes”, at the same time declaring that he was misunderstood . Or adds that with the implementation of the plan you need to wait.


Frankly speaking, in our country there are plenty of such “puchdemones” when they say “A” and are already ready to pronounce “B”, but in the end flowery explanations begin that, they say, it’s not time to step further, you have to wait, and “ A - it was already too bold and even unjustified.

In general, “puchdemones” are people who, with fire in their eyes and tense muscles, grab a chess piece from the board, resolutely move it to another cell, but then, looking down, return back, despite the fact that they have violated an important chess rule: took - go!

Get to the point.

On the eve of the Catalan Parliament was surprised primarily by the Catalans themselves. And both those who had previously voted for independence from Spain in the referendum, and those who rejected the very idea of ​​such a referendum.

The fact is that the Catalan Legislative Assembly for two days made two reciprocal decisions. At first, the majority of parliamentarians in Barcelona voted to adopt a declaration of independence. Literally right there, the head of Catalonia, Carles Puchdemon, came out to the rostrum and announced that this decision must be immediately suspended in order to “start a dialogue with Madrid”. In the meantime, the Catalan parliamentarians went to Madrid for a “dialogue”, apparently reviewing the cadres with the actions of the visiting Spanish police, were already preparing to make a decision on self-dissolution. Attention is drawn to the fact that the deputies dissolved their own parliament on orders from Madrid, although they themselves voted for sovereignty from the kingdom. That's the logic. This is the collective “buzdemon”.

How do these measures explain the Catalan deputies themselves, who could have received the Nobel Prize for “reinforced concrete logic,” if such a prize were given? The explanation looks like this: we take into account the Balkan experience and do not want a repetition of the bloody mistakes made during the breakup of Yugoslavia. We want to break up with Madrid peacefully, so much so that he will eventually let us go ...

As an example, such an event is more than a quarter of a century old as a referendum in Slovenia. A few words about the Balkan plebiscite, which was the first sign of the collapse of Yugoslavia.

The so-called Democratic opposition of Slovenia has initiated a referendum. It was held in December 1990 by decision of the local parliament. The question then was one and sounded like this:
Should the Republic of Slovenia become an independent and sovereign state?

Then the Slovenian Assembly made a decision of this nature: the results of the referendum would be temporarily “frozen” for the implementation of the negotiation process with Belgrade. It is important to note that at that time the Yugoslav constitution itself was on the side of the Slovenes, which prescribed the right of the republics to self-determination. As a result, Slovenia has truly become an independent state virtually bloodless - which cannot be said about the subsequent fragmentation of a Balkan power called Yugoslavia.

Here, in the Catalan Parliament, when mentioning Slovenia, an important detail is tried to be overlooked: if under Yugoslavia a charge was laid for possible disintegration (that very point of the constitution on self-determination), then in “democratic” Spain with referendums “problem”. There is no hint in the basic Spanish law that Madrid can let go of someone, if he is too impatient with sovereignty. Therefore, the logic of Madrid is very simple: We are not going to violate the constitution. No recognition of independence — once, the dissolution of the Catalan parliament — two, early elections to this very parliament — three, the introduction of direct rule by the Spanish government in Catalonia — four.

Here and wash, gentlemen "puchdemona" in Catalonia. They took a piece from the board, but with the move they did not dare, and therefore everything is simple - get it, sign it. And they signed ... They themselves resigned and sent ... 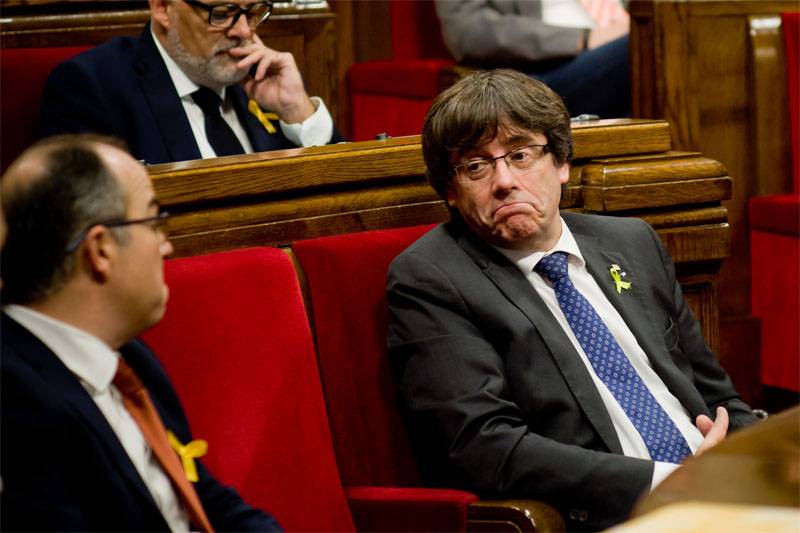 Madrid did not stop there. The Spanish Prosecutor General’s Office has filed lawsuits against Carles Puchdemon and other Catalan “revolutzonerov”. All members of the so-called Generalitat de Catalunya are accused of incitement to insurrection, encroachment on the constitution, revolt against state power and embezzlement of budget funds. And now, according to the “humane” Spanish laws, all the “comrades” from the Barcelona generality are facing a real term of up to 30 years. It is noteworthy that the Spanish Prosecutor General is not even going to use the police to arrest Pucdemon and his hesitant associates. According to the head of the Prosecutor General’s Office of Spain, members of the Catalan government must come to the authorities themselves. Let them dry crackers, so it turns out? ..

The situation for the Catalan political elite is murderous. Themselves driven into a corner, despite the fact that initially it (the top) was supported by millions of Catalans. And if you refer to any Yugoslav "experience", then in Barcelona you could well recall the decision of the international special commission, which recognized the "legitimacy" of secession of Kosovo from Serbia against the background of the existence of Serbian constitutional prohibitions. After all, it was then stated in the West that the independence of Kosovo must be recognized because of the danger to the Albanian population from Belgrade (and personally Milosevic). And if you scroll through the shots with how the Spanish police thrashed their legs and batons with Catalans during and after the referendum, how they poured them with tear gas and rubber bullets, wouldn’t the commission find the danger to the Catalans from Madrid? I would hardly have found ... But there was a chance for a “Kosovo” dispatch from Puchdemon, given the double standards actively practiced in modern Europe.

Now there is almost no chance. If earlier Catalonia was going to introduce an almost parallel economy with the advanced use of cryptocurrencies, now all these Puchdemon initiatives look like a big bubble that not only burst, but also left a frankly unpleasant smell.

Catalans simply threw. And the residents of Barcelona and the surrounding area have already begun to say that the current generality was a collective decoy of Madrid, in order to deprive Catalonia of its autonomous status once and for all.

Ctrl Enter
Noticed a mistake Highlight text and press. Ctrl + Enter
We are
Situational analysis of the death of the MH17 flight (Malaysian Boeing 777), made on the basis of engineering analysis from 15.08.2014Bashar al-Assad: In Syria, not the “revolution” that the enemies are talking about, but the revolution of the army and the people against terrorists
43 comments
Information
Dear reader, to leave comments on the publication, you must to register.