The Nationnal Interest: Why Russia, China and North Korea Should Be Afraid of the American B-21 Bomber

October 31 2017
106
Two years ago american aviation The industry has begun to create the promising strategic bomber Northrop Grumman B-21 Raider. The first car of this type will have to go to tests only after a few years, however, certain evaluations of a promising project are already being expressed, and attempts are also being made to predict further events.


October 27 The National Interest published an article by Kyle Mizokami titled “Why Russia, China and North Korea Bomber Bomber” (“Why Russia, China and North Korea should be afraid of the American B-21 bomber”). As the title shows, the publication is devoted to the latest B-21 project and the consequences of the emergence of such equipment in the context of the international military-political situation. 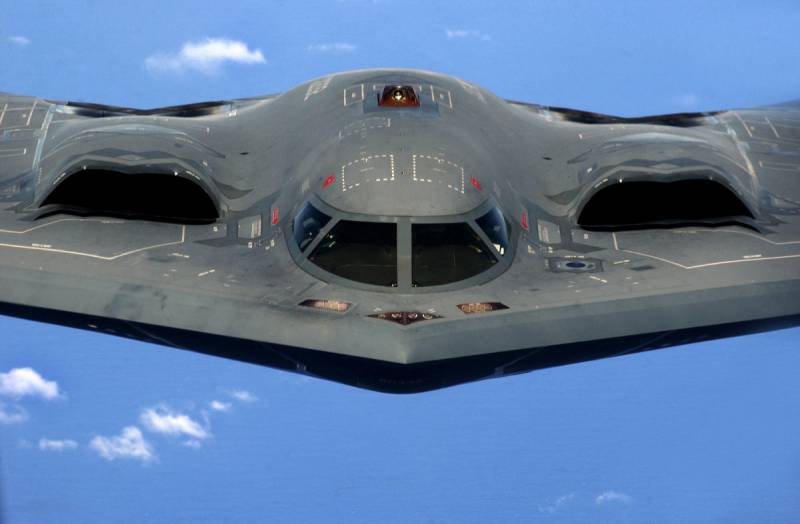 At the beginning of his article K. Mizokami recalls the events of the recent and distant past. October 27 2015, the company Northrop Grumman received a contract to develop a promising low-profile bomber B-21 Raider. However, he notes that approximately 35 years before the signing of the contract for B-21, a previous agreement of this kind was concluded, the result of which was the B-2 Spirit aircraft.

The author is forced to note that at the moment many details of the new project are shrouded in mystery. At the same time, part of the information has already been published. Having some information about the future of B-21, one can draw certain conclusions, which the American journalist suggests.

The official designation of the bomber - B-21 Raider - has a curious origin. The numbers point to the 21st century, and the additional name is reminiscent of the legendary 1942 operation of the year. During World War II, a B-25 Mitchell bomber detachment commanded by General James "Jimmy" Doolittle attacked a number of targets on the territory of the Japanese islands. Among other things, the bombs were dropped on Tokyo. Recalling Reid Doolittle, the US Air Force points to the boldness of this attack, the strategic and tactical surprise, as well as the unique length of the route overcome by the “raiders”.

As the image of the B-21 aircraft, officially published by the US Air Force, shows, the new project involves the construction of a bat-like type of flying vehicle. At the same time, the new B-21 should have a certain similarity to the existing B-2. However, the two aircraft are significantly different from each other.

K. Mizokami draws attention to the layout of the power plant. On the new bomber, the engines will be placed closer to the rudimentary fuselage, while the General Electric F118-GE-100 engines of the B-2 aircraft are located at a certain distance from the central section of the airframe. The new project involves the use of oblique air intakes instead of "serrated", used in serial equipment. In addition, the promising B-21 will receive means of cooling the jet gases of engines, designed to reduce visibility in the infrared range. Curiously, such devices were present in the early images of the future B-2, but they were not included in the final draft.

A prospective bomber looks like an existing B-2 car, and, apparently, will also be four-engine. In 2016, Pratt & Whitney was selected as a subcontractor and will have to make engines for the new B-21. Modified versions of the F-100 and F-135 turbojet engines are considered as the power plant for this aircraft. The relatively old F-100 used on the F-15 Eagle fighter jets looks like the right choice. However, instead, the customer can choose a modification of the F-135, installed on the F-35 Joint Strike Fighter fighter jets. This will allow both to obtain the required characteristics and reduce the cost of production of engines for two aircraft.

Like its predecessor, the new Northrop Grumman B-21 Raider will be a heavy strategic bomber capable of carrying nuclear and conventional weapons. If it does not differ from B-2 in size, then there is reason to believe that the payload will remain at the same level. In addition, the B-21 can store two load units. K. Mizokami believes that the aircraft can be equipped with Advanced Applications Rotary Launcher drum launchers already used on B-2 machines. Each such product carries eight rockets of one type or another.

To solve special problems, the B-21 can carry nuclear weapon. In this case, his ammunition will include cruise missiles Long-Range Stand-Off (LRSO), characterized by low visibility for the means of detecting the enemy. In addition, compatibility with B61 tactical bombs, including their latest version B61-12, will be ensured. It is possible to combine weapons of different types. In this case, LRSO missiles will be used to destroy air defense facilities and break through to the main objectives. The latter, respectively, will be destroyed by guided bombs.

In "normal" combat missions, the B-21 will be able to use a wide range of conventional ammunition. He will be able to carry a JASSM-ER cruise missile, as well as a GBU-31 Joint Directed Attack Munition guided bombs in 2 caliber thousand pounds. The author believes that in the case of non-nuclear weapons, the strategy of consistent use of missiles and bombs can be used: the first will help make the “passage” in the enemy's air defense system, and the second will fly directly to the specified targets. As an alternative, we can consider the possibility of using only bombs or only rockets in one sortie.

Also, the GBU-57A / B Massive Ordnance Penetrator bomb should enter the Raider’s nomenclature of weapons. This item weighs 30 thousand pounds (14 t), and currently it can only be carried by a B-2 bomber. Thus, in a promising project, it should be possible to use the most severe American aviation weapons that do not have a large number of carriers.

K. Mizokami points out that the air force commissioned Northrop Grumman to develop and build a bomber that uses the principles of an open software and hardware architecture. Thus, unlike previous cars in its class, the new B-21 can be more than just a bomber. The specifics and features of the required architecture should ensure the possibility of simple and quick hardware updates, as well as facilitate the integration of new tools. Thanks to this, the aircraft can be quickly and easily adapted to new missions of one kind or another.

For example, in the cargo hold, in addition to weapons, it will be possible to place surveillance devices, target designation, etc. In addition, B-21 can become a carrier of special communications equipment, unmanned aircraft complex, electronic intelligence systems or electronic warfare systems. All this will allow to solve various combat missions in a variety of conditions, including with active opposition from the enemy. In general, according to the author, the current implementation of plans in the context of an open-air equipment architecture in the future may make the B-21 the world's first multi-purpose bomber.

According to open data, the first flight of the promising strategic bomber-missile carrier Northrop Grumman B-21 Raider will take place in the middle of the next decade. In the future, the United States Air Force intends to buy at least hundreds of such aircraft. This technique will replace the existing B-52H Stratofortress and B-1B Lancer models. The possibility of building and buying two hundred new bombers is not excluded. However, the fate of the second hundred aircraft is directly related to the size of the military budget and the financial capabilities of the customer.

The author of The National Interest, making a number of assumptions about the future of B-21, recalls that there is currently no detailed information on this subject. How exactly this car will look like - experts and the public do not yet know. Now the Air Force and the developer seek to maintain secrecy and carefully protect information about it. This situation may persist over the next few years, up to the publication of official data or the first display of the finished car.

Thus - sums up Kyle Mizokami - the new B-21 Raider is temporarily dissolved in the darkness of secret military technologies, and will be released "again into the light" only when it is ready.

It should be noted that the project of the Northrop Grumman B-21 Raider strategic bomber is indeed one of the most interesting American programs of the present. The US Air Force is planning a cardinal renewal of its strategic aviation, which is supposed to be carried out with the help of technology of the most original appearance with special capabilities. For this reason, it is to be expected that interesting ideas of one kind or another will be implemented in the B-21 project.

For obvious reasons, the customer and the contractor are in no hurry to disclose all their plans and publish the technical details of the new project. Nevertheless, some fragmentary information has already become known from official and unofficial sources. In addition, an official image of the future aircraft was published, reflecting the current status of the project. However, the actual results of the project may differ markedly from those previously planned.

The lack of detailed technical and tactical information turns out to be a good basis for the emergence of various assessments. So, in his article “Why Russia, China and North Korea Should Fear America’s B-21 Bomber,” the author of The National Interest is trying to predict what kind of power plant a promising machine will receive. In addition, he presented an exemplary range of weapons suitable for use by Raider aircraft. Did K. Mizoki manage to make correct predictions - it will be known later, after the appearance of official information.

A curious feature of an article in The National Interest appears when comparing the title with the material itself. The name of the publication states that Russia, China and the DPRK should be afraid of the new aircraft, and besides, it promises to explain why. At the same time, the article itself does not mention any third countries, and it only considers the tactical and technical features of the prospective project. Apparently, the reader is invited to consider the possible appearance and expected capabilities of the B-21 bomber, and then independently draw conclusions in the context of its role in the context of containing Russia, China or North Korea. The author, however, does not express his opinion on this matter.

Obviously, the promising B-21 bomber, entering serial production and starting service in combat units, will in a certain way affect the balance of power in the world - as always happens when new types of weapons and equipment for strategic nuclear forces appear. However, these events still relate to a rather distant future, and the available information does not allow making accurate predictions. Perhaps the future B-21 Raider can really disturb Moscow, Beijing and Pyongyang. But the reasons for this fear at the moment are not completely clear, and full-fledged conclusions on this issue can only be made in the future.


The article “Why Russia, China and North Korea B-21 Bomber”:
http://nationalinterest.org/blog/why-russia-china-north-korea-should-fear-americas-b-21-22925

Ctrl Enter
Noticed a mistake Highlight text and press. Ctrl + Enter
We are
The National Interest: What if the two best submarines in the world go to war?Sikorksy S-97 Raider - High-Speed ​​Multi-Purpose Rotorcraft
106 comments
Information
Dear reader, to leave comments on the publication, you must to register.