The Catalan Parliament decided to dissolve the Madrid directive.

October 30 2017
47
A surprising decision today was noted by the Parliament of Catalonia. Just a few days ago, the Catalan parliamentarians by a majority vote adopted a resolution on independence from Spain, and today (also by a majority vote) the dissolution of themselves, initiated by official Madrid, was adopted. To explain this Catalan "logic", Catalan experts are needed, but Catalan experts themselves are at a loss from the mutually exclusive actions of parliamentarians.


The press service of the Catalan legislature publishes a message stating that tomorrow’s meeting is canceled and that parliament is dissolved. It is noted that in Catalonia there will not be its own legislative body until the holding of new elections, which Madrid has appointed for December 21. 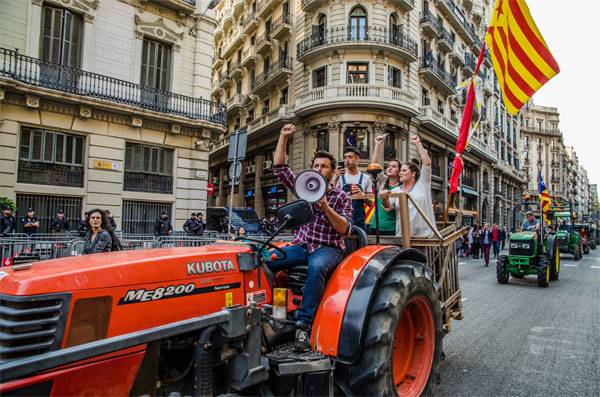 Earlier, the Spanish Senate by a majority vote adopted a resolution stating that in Catalonia, direct control was introduced by the Spanish authorities. The introduction of such a management with respect to Catalonia was carried out for the first time in stories of the state. The Spanish senators said that the voting was guided by the 155-th article of the Constitution, which spelled out the mechanisms for introducing direct control.

What was it? - ordinary Catalans ask themselves in social networks, declaring that they will take to the streets because they believe that the local authorities have betrayed them.