October 30 2017
117
The forecast of the international climate: in January 2018 will sharply become cold, wait for the West Wind of the Cold War and new anti-Russian sanctions! The State Department announced an impressive sanctions list, which included dozens of Russian organizations, including those related to the defense sector and intelligence services of the Russian Federation. The sanction attack could begin as early as January. What should Russia do? No need to be afraid: Navalny will save the country! 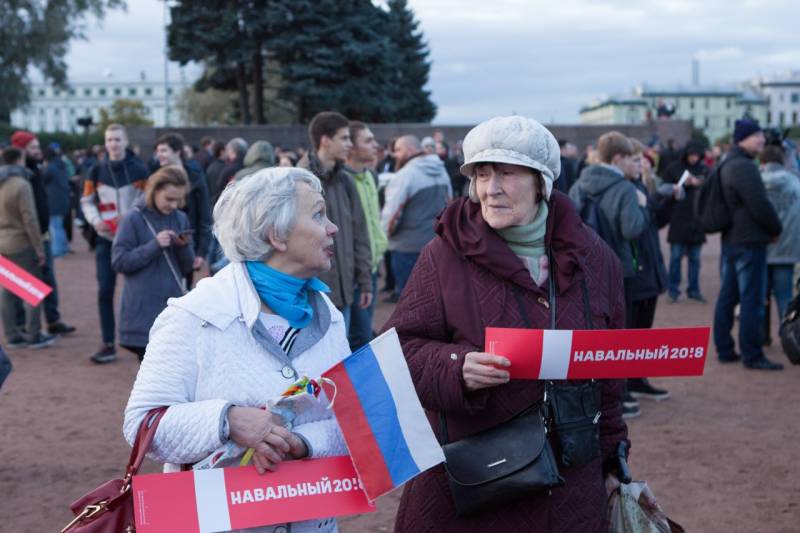 Correspondents M. Zapotoski, K. Demirchyan, D. Filipov told about how the team of Donald Trump continues the policy of sanctions against Russia.

The State Department has added to the 39 list of Russian companies and government organizations related to the defense and intelligence sectors of the state, and warned: anyone in the United States or in other countries who have “significant business” with these organizations can cater to the cap of sanctions. Sanctions measures can be taken from the beginning of next year.

The list, journalists say, was Trump's “belated response” to the law, which Trump “reluctantly signed” himself back in August. The “black list” of the White House should have been developed until October 1. Through their bill, congressmen demanding “new targets for new sanctions” want to punish Moscow “for its actions in Ukraine and its interference in the elections in the US 2016”. The bill had broad bipartisan support and, in addition to pressure on Russia, pointed to new sanctions against Iran and North Korea.

The “anti-Russian” list openly appeared on the website of the US State Department and was a kind of “guide” for those who might be affected by the new measures. The list of companies and agencies listed in the document can lead to "broad consequences" for American and foreign companies that have business ties with Russians. According to US lawmakers, this "announcement" from the State Department is a "step in the right direction." No doubt: the new law is already being implemented.

In addition to the official intelligence and defense spheres of Russia, the law will strike with sanctions on the energy, mining, railway and shipping industries of Russia. Sanctions will be attacked and private individuals: persons "accused of corruption and human rights violations." Those who are involved in “significant” transactions with these organizations may themselves please under the sanctions from January 29 of 2018 of the year.

A State Department spokesman told reporters that "small-scale transactions" would probably not be counted. The State Department says that the United States government will take into account the circumstances of each transaction, find out whether a particular transaction should be considered an act aimed at strengthening the “military potential”.

How does the State Department find out about any deal? Sources are: "from the press" or "in other ways."

In the meantime, Russia is confident that the United States is acting on 1950's scenarios. President Vladimir Putin last week just accused the United States of being pulled "in the 1950s." Presidential spokesman D. Peskov, citing Putin’s remarks, however, said that Moscow would strive for progress in bilateral relations, “since our American colleagues are ready for this and are ready to do it.” True, this readiness is unstable. "As far as we can see, this readiness is not so stable," - quotes the publication Peskov.

State Department spokesman Heather Nauert, in turn, noted that, according to Secretary of State Rex Tillerson, the issue of sanctions is "complicated."

Senators John McCain and Benjamin Cardin (known conductors of the new package of sanctions) have a different opinion. In a joint statement, they called on the US State Department to allocate resources "for the effort." Also, senators have promised to carefully analyze how the Trump team intends to distinguish "significant transactions" from small-scale transactions. Senators are ready, "if necessary," to overturn Trump's relevant decisions if they "do not live up to expectations." Such cancellation is possible under the new law.

Another senator, Bob Corker, warned the Trump team separately that the US Congress would conduct "thorough and timely consultations" about the "addition" of sanctions - and so on up to the "full" implementation of them.

Russian analyst L. Nersisyan notes that the list of affected organizations and companies includes “almost all large state-owned enterprises of the military-industrial complex of Russia”. At the same time, any new sanctions “are unlikely to harm the majority of the Russian defense industry,” Nersisyan said, since Russia has partnership relations with South Korea, China and other Asian countries.

The Washington Post reminds us that Rostec, a giant of a citizen and defense, which produces firearms, is designated in the State Department’s blacklist. weapon, modern optics, helicopters, communication systems, military transport and much more. Rostec is controlled by Rosoboronexport (the management of the import and export of military equipment), which is also listed. Also, the Kalashnikov concern has been put on the black list. The list includes companies producing submarines, producing anti-aircraft missiles and launchers, building military and civil aircraft (Sukhoi and Tupolev).

So, the sanctions attack of Americans can begin as early as January. Exactly before the presidential election. What should Russia do? No need to be afraid: Navalny will save the country!

Alexey Navalny "Exclusively" Reported to the Reporter «The Independent»: he is Russia's best hope for overthrowing Putin.

Does Russia "hope" for the overthrow of Putin? 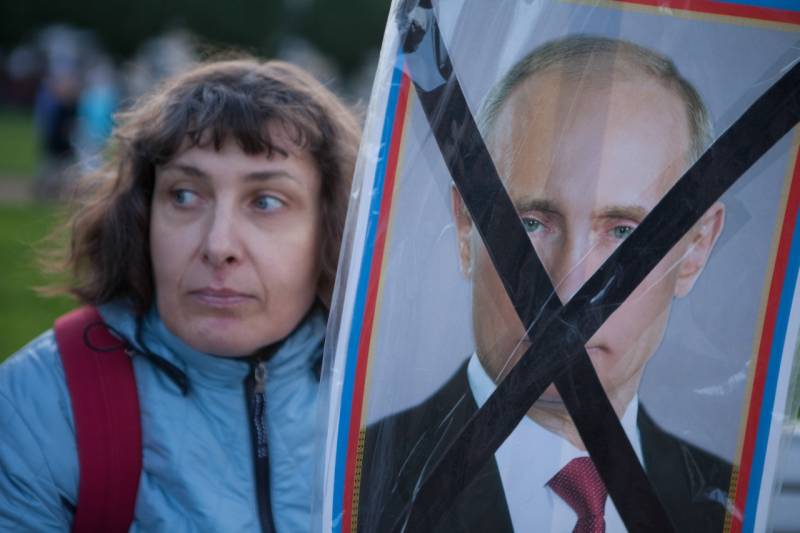 An "experienced opposition leader" believes that he will not fall into the Kremlin's trap. He also conveyed the message to his “voters”.

"Uncompromising policy" Navalny, noted in the material, often led him to sharp conflicts. In April, he almost lost sight in one eye when he was splashed with green in his face. His staff in the regions were often attacked; the head of his Moscow campaign headquarters was beaten with a “metal pipe”. His brother Oleg is in prison, the third year he is serving a sentence, which “many interpret as a direct result of Mr. Navalny’s participation in politics”. Last week, the European Court of Human Rights conditionally ruled that the original court delivered an unfair sentence. Mr. Navalny claims that his family is under constant surveillance. “My wife notices this more than me,” he told the reporter.

However, the opposition politician does not intend to "soften his position." “What should I do: drop everything? If I take a step back, what will I say to Oleg? How do I explain these past three years? ”

Navalny himself just got out of jail after serving 20 days. He looks, however, "relaxed and rested." Sometimes he becomes angry and demonstrates “disappointment”: disappointment at the thought that his sacrifices and organizational successes can be undone by a new political reality beyond his control. Frustration at the thought that the Kremlin will replay it.

This is where the topic of the candidate Ms. Sobchak appears.

Mr. Navalny believes that he is the only candidate who is ready to carry out a serious campaign. His team has a nationwide network of 80 regional headquarters and 170.000 volunteers. Ksenia Sobchak and do not dream about this.

“Putin is the father of Russian corruption,” is one of Navalny’s theses. And, as if emphasizing the difference between the “candidates”, Ksenia Sobchak was given prime time on state television. She was given a “nice audience with Russian flags”. True, Sobchak herself insists that she did not negotiate with the Kremlin. And she says that, unlike Navalny, she is able to return democracy to Russia without blood on the streets. It is interesting that Ms. Sobchak is ready to withdraw her candidacy if Navalny is registered as a candidate. However, the latter is unlikely.

Ksenia Sobchak accuses Navalny of trying to "monopolize" the opposition, create a cult of leadership around himself, but Navalny says that he has earned the right to be a leader and lead people. “If you want to challenge, please do it,” he suggests. - Conduct your own investigations. Be subject to several criminal prosecutions. Watch half of your relatives go to jail. And then, perhaps, you can break into the lead. "

Here are the data freshly survey, which led October 27 RIA News". The poll showed how many Russians would vote for Putin.

If the presidential election were held next Sunday, the current head of state would vote for 67% of voters: these are the data of the Public Opinion Foundation poll.

According to the survey, V.Putin's rating from the previous presidential election (2012 year) increased by 18 percentage points (49% and 67%). And the vast majority of respondents (80%) today trusts the current president. At the same time, Putin’s work as president was positively evaluated by 81% of respondents. Putin is mostly supported by people over sixty, mostly women. The income of the majority of respondents positively related to President Putin ranges from 8 to 20 thousand rubles per month.

We will listen to the other side. Here is another fresh poll.

The overwhelming majority of Russians (90%) are not ready to vote in elections for Ksenia Sobchak, the newspaper notes "Vedomosti". Curiously, 9% still admits this possibility. Among the latter, there are both supporters of President Vladimir Putin, and those who have not made up their minds, and 13% of those who did not intend to vote at all - such are the data of the Levada Center poll.

And here are the indicators. Small numbers and large numbers.

Ksenia Sobchak’s electoral rating is less than 1%. In Navalny, the indicator is almost twice as high: 1,8%. This does not compare with the indicator of Putin, but the opposition leader bypassed Gennady Zyuganov, who collected only 1,7%. Zhirinovsky received 3%. Finally, Putin, according to the same survey, boasts 53%.

As you can see, according to various polls, the Russians are not at all eager to overthrow Putin.

Ctrl Enter
Noticed oshЫbku Highlight text and press. Ctrl + Enter
We are
Situational analysis of the death of the MH17 flight (Malaysian Boeing 777), made on the basis of engineering analysis from 15.08.2014Regime change in the Russian Federation? Why Washington wants to end Vladimir Putin (“Global Research”, Canada)
Military Reviewin Yandex News
Military Reviewin Google News
117 comments
Information
Dear reader, to leave comments on the publication, you must to register.